Background: The aim of this study was to assess the prognostic value of lymph node-associated variables, pN, lymph node ratio (LNR) and log odds (LODDS), in patients with bladder cancer.

Methods: In the discovery cohort, 3358 patients with muscle-invasive bladder cancer (MIBC) and treated with radical cystectomy were identified from the Surveillance, Epidemiology, and End Results (SEER) database. A total of 173 patients with MIBC who underwent radical cystectomy at Shanghai Cancer Center between 2010 and 2013 were enrolled in the validation cohort. LNR and LODDS were calculated in two cohorts and prognostic value was compared between these two variables.

Results: In the two cohorts, survival differences between LODDS, LNR and pN (from the 7th AJCC TNM system) cohorts were statistically significant. Univariate and multivariate analyses confirmed that LNR and LODDS were independent prognostic factors and LODDS was better at predicting prognosis than pN and LNR for patients with MIBC. Moreover, LODDS had a better discriminative ability and model fit, proven by the highest Harrell's concordance index and lowest AIC among the three variables. Furthermore, scatter plots of pN, LNR and LODDS revealed that several groups of LNR and pN were heterogeneous and could be better stratified by LODDS in terms of prognosis estimation.

Conclusion: LODDS has significant prognostic value for patients with MIBC. Moreover, LODDS is better at predicting prognosis for MIBC patients compared with pN and LNR.

Bladder cancer is the ninth most common cancer worldwide, with more than 330,000 new cases and more than 145,000 deaths every year. Approximately 30% of these patients have muscle-invasive bladder cancer (MIBC) [1]. In recent years, with improvements in living standards and changes in lifestyle, bladder cancer has resulted in increasing morbidity in China, leading to an estimated 80,500 new cases and 32,900 deaths in 2015 [2, 3].

Currently, the prognosis for patients with bladder cancer is often estimated based on the Tumor, Node, Metastasis (TNM) staging system. In the TNM system, N staging mainly depends on the involvement of the lymphatic region according to the 7th and 8th AJCC Cancer Staging Manual [4, 5]. However, this method ignores the number of involved and examined lymph nodes, which may decrease the precision of prognosis prediction.

Our study was designed to investigate the prognostic value of LNR and LODDS in two cohorts of patients with MIBC treated with radical cystectomy.

In the discovery cohort, a total of 3759 patients with MIBC treated by radical cystectomy were identified in the SEER database between 1998 and 2008. The inclusion criteria were as follows: 1) diagnosed with MIBC as first or only malignancy; 2) histological type was limited to transitional cell carcinoma; 3) treated with radical cystectomy; and 4) patient older than 18 years when diagnosed. [13]. Patients with T1, Tis or Ta staging (n=249), M1 staging (n=50), missing survival data (n=41), or missing lymph node data (n=61) were excluded, leaving 3358 patients.

The validation cohort included 292 patients with MIBC who underwent radical cystectomy at Shanghai Cancer Center between 2010 and 2013. Inclusion criteria were as follows: 1) diagnosed with MIBC as first or only malignancy; 2) histological type was limited to transitional cell carcinoma; 3) underwent radical cystectomy; and 4) patient older than 18 years when diagnosed. Patients with T1, Tis and Ta staging (n=49), missing lymph node data (n=28) and or missing follow-up data (n=42) were excluded, leaving 173 patients.

The study was approved by the Research Ethics Committee of Shanghai Medical Center, Fudan University, China according to the provisions of the Declaration of Helsinki (as revised in Fortaleza, Brazil, October 2013). Patients in the validation cohort were anonymous and other personal information was also erased. For the public SEER database, we did not need informed consent of the patients.

Definition of LNR and LODDS

Clinicopathological variables were collected for analysis. Survival differences were calculated using the log-rank test. Univariate and three-step multivariate analyses were carried out using Cox's proportional hazards model to assess the independent effect of clinicopathological factors on survival. After each step of multivariate analysis, Harrell's concordance index (HC index) was calculated to test the predictive ability and fit of these lymph node models. A model with perfect predictive capacity (sensitivity and specificity of 100%) would have a HC index of 1.00 while HC index=0.5 indicated no predictive ability [15]. Furthermore, the Akaike's Information Criterion (AIC) was employed to evaluate the model fit. Lower AIC often indicated a better model fit [16].

The survival curves of each lymph node model were depicted by the use of GraphPad Prism (version 6.01, GraphPad Software inc., CA, USA). We also made scatter plots to reflect the association between pN, LNR and LODDS by SPSS (version 21.0, IBM Corp. NY, USA).

Distribution of pN, LNR and LODDS within each group

To assess the relationship of pN, LNR, and LODDS, scatter plots were created (Figure 2). As shown in Figure 2B and 2C, each pN classification could be divided into different LNR or LODDS classifications, indicating the heterogeneity in every pN classification. As to LNR and LODDS (Figure 2A), it was obvious that they had a close correlation. The classification of LNR and LODDS was similar in general. However, when LNR equaled 0 or 1, the value of LODDS was heterogeneous. This suggested that LODDS might be more discriminative than LNR. A similar conclusion could also be drawn from Figure 2D, 2E and 2F. 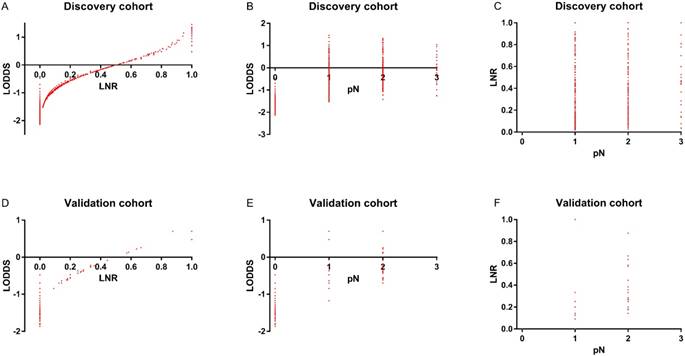 An accurate staging system is of great importance to predict the prognosis of cancer patients, which could help decide the best strategy for postoperative therapy and follow-up. Currently, the 7th UICC/AJCC TNM classification is the most widely used prognosis-prediction model for patients (the 8th edition was released recently). However, it still has some drawbacks, especially in pN categories [7]. The classification of pN is highly dependent on NMLN, while NMLN is directly influenced by TNLE [17]. In other words, if TNLE is not big enough, the pN category cannot ensure a precise prediction of prognosis (as was recommended in an article on bladder cancer, when TNLE was ≥15, the probability of missing lymph node metastasis was less than 19% [7, 18].). In fact, it was common that the retrieved and examined lymph nodes were not adequate in some cases. To make up for this shortcoming in the AJCC pN staging system, several methods of staging that incorporate other lymph node-associated information have been proposed in recent years. Among these novel lymph node models, LNR and LODDS tend to be the most promising.

LNR, as a model for prognosis estimation, has been confirmed to be effective in various cancers, including gastric, breast, colon and lung cancers [19-22], compared with NMLN and pN from the TNM system [23]. Although LODDS was originally relative to LNR and fewer studies focused on this field, it was still confirmed to be a more accurate classification for lymph nodes than pN category in several articles. Lee et al. studied 347 patients with oral cavity squamous cell carcinoma (OSCC) and revealed that LODDS could stratify OSCC patients and help to identify high-risk patients missed by AJCC pN classification and the rN classification [24]. Biondi et al. identified 258 colon cancer patients who had undergone surgical resection and found that compared with other nodal staging systems like TNM, the prognostic power of LODDS was less influenced by the number of dissected and examined lymph nodes [25]. One of the most important advantages of LNR and LODDS over pN is that the ratio instead of the absolute number of lymph nodes can avoid the restriction of insufficient lymph nodes examined. In this way, a comparatively accurate prognosis can be guaranteed regardless of TNLE.

In our research, we studied the prognostic ability of LNR and LODDS in patients with bladder cancer, which has hardly been reported in previous articles. Interestingly, the results were consistent with those in other malignancies. LNR and LODDS were significant variables for survival differences in both the discovery and validation cohorts (P<0.001, Table 1). In the univariate and multivariate analyses (Table 2 and 3), LNR and LODDS turned out to be independent factors for prognosis, and LODDS showed better predictive capacity than pN; once LODDS was added to the multivariate model, the P-value of pN increased and became greater than LODDS. Moreover, the AIC and HC index further confirmed the superiority of LNR and LODDS over pN in terms of prognostic power (Table 4), indicating LNR and LODDS had better model fit and predictive ability, respectively. Last but not least, in scatter plots (Figure 2B, 2C, 2E and 2F) it was discovered that every group classified by pN was heterogeneous and could be divided into different LNR or LODDS groups, which suggested that LNR and LODDS had a better discriminative capacity compared with pN for prognosis estimation.

Our results also revealed that LODDS was superior to LNR as a prognosis classification system in bladder cancer patients. In the step 3 multivariate analysis, it was obvious that LODDS had a smaller P-value (P<0.001 vs P=0.23, discovery cohort; P=0.003 vs P=0.032, validation cohort) and a higher HR than LNR in both of the cohorts. Furthermore, LODDS had a greater HC index and a smaller AIC in contrast with LNR. As to the scatter plots, in the intermediate part of the curve LODDS was elevated following the increase of LNR, while at the beginning and the end of the curve the values of LODDS were heterogeneous, indicating that LNR lacked discriminative capacity when it was close to 0 or 1.

This conclusion is in line with the results of several studies. Zhao et al. studied 1097 patients with lung adenocarcinoma who underwent complete surgical resection and found that LODDS could help stratify patients with different prognoses into different groups when their LNR was equal, especially when it was 0 or 1 [14]. Wang et al. also raised an interesting question as to whether patient A with four metastatic lymph nodes out of four lymph nodes examined had the same prognosis as patient B with 20 metastatic lymph nodes out of 20 [23] Intuitively, A had a better prognosis than B, even though they shared the same LNR, which necessitated the use of LODDS in this case. Because of these advantages, LODDS was recommended in clinical practice, although further research is required.

There are several limitations to our study. Firstly, our research was retrospective and conducted at a single center, leading to a small research population. These drawbacks decreased the generality of our results and made it difficult to study the prognosis effect of the number of lymph nodes examined, which is an important factor for predicting metastasis according to Shariat et al. [18]. Secondly, information on treatment was not included both in the discovery and validation cohorts, making it difficult to assess the treatment strategy for different groups of patient. Thirdly, because of the varying characteristics of the different studies, there was no universal cut-off value for LNR and LODDS. Quartiles [19] and recursive partitioning [14] were both reported to help determine the cut-off value and sometimes researchers even determined it arbitrarily. Further research is needed to find a better cut-off for LNR and LODDS.

In conclusion, our study confirmed the ability of LNR and LODDS to predict prognosis for patients with MIBC after radical cystectomy. Moreover, LODDS had an advantage over LNR and pN in prognosis estimation. Therefore, it is worthwhile to consider incorporating LODDS into the current TNM system. Given that few studies focus on the value of LODDS and LNR in bladder cancer, more research is necessary on this topic.

The authors would like to thank all patients involved in this study. This work was funded by the National Natural Science Foundation of China (81572531). The funding source provided financial support for the study and did not have any other involvement in this study.

4. Edge SB, Compton CC. The American Joint Committee on Cancer: the 7th edition of the AJCC cancer staging manual and the future of TNM. Annals of surgical oncology. 2010;17:1471-4

12. Yildiz MM, Petersen I, Eigendorff E, Schlattmann P, Guntinas-Lichius O. Which is the most suitable lymph node predictor for overall survival after primary surgery of head and neck cancer: pN, the number or the ratio of positive lymph nodes, or log odds?. Journal of cancer research and clinical oncology. 2016;142:885-93