Methods: We conducted a meta-analysis to assess the efficacy and safety of Neoadjuvant CRT plus surgery comparing with neoadjuvant CT plus surgery or surgery alone. Feasible studies were searched from electronic databases. The outcomes of survival, R0 resection rate and adverse effects were analyzed. The outcomes were measured with relative risk (RR) and odds ratio(OR).

Conclusion: Patients with oesophagus or GOJ carcinomas can obtain a survival advantage from neoadjuvant CRT. The addition of radiation was efficacy and safe in range. However, these results need further high-quality prospective RCTs confirmation.

Cancers of the oesophagus or gastro-oesophageal junction (GOJ) are often locally advanced or metastatic and have an unsatisfactory prognosis[1]. Noticeably adenocarcinoma (ADC) now accounts for more than 50% of newly diagnosed cases[2]. Nowadays, surgical therapy is still the nucleus of treatment for the oesophagus or GOJ carcinoma; However, despite progress in surgical techniques and the extension of surgical resection, survival has not improved. The 5-year survival rates range from 15% to 30%, which indicates the urgent need for additional therapies[3]. As we all know, neoadjuvant CT for advanced esophageal and gastric cancer have been accepted in various prospective randomized studies and meta-analyses due to the beneficial on survival over last decade. The notable MAGIC and FFCD trials, both of which included rather plenty of patients and were scientifically statistical, showed a significant benefit for neoadjuvant CT.

Neoadjuvant CRT is a new subject drawing great attention. The utilization of radiotherapy in the treatment of advanced gastric and lower esophageal cancer was not only sterilizing cancer cells that might dislodge and seed during surgery, but also made unresectable tumors shrink sufficiently to allow resection[4]. However, pathological changes include edematous, thickened and hyperemic mucosal manifestation in the early stage from radiotherapy also added the negative effect on survival[5]. Although the RCT of preoperative CRT for esophageal cancer in 1992 by Nygaard et al reported radiotherapy combined with CT could prolong survival[6]. Nevertheless there were still many phase III trials and meta-analyses comparing between CRT by surgery and surgery alone not showing a benefit for neoadjuvant CRT. The patients with major pathologic response benefited from a significant improvement in OS compared to no response or minor pathologic changes after neoadjuvant therapy in gastro-esophageal cancers[33,34]. Meanwhile, Piro et al thought that the unsatisfactory result in OS of the different therapeutic approaches might be partially ascribed to the incorrect application in patients without discriminating potential responders by identifying their biomarkers[35].The contradictory results above made neoadjuvant CRT be considered only for selected patients. Whether neoadjuvant chemoradiation can improve patient survival remains controversial.

Therefore we used meta-analysis to analyze the results of published randomized trials and deeply discuss the role of neoadjuvant CRT followed by surgery for the oesophagus or GOJ cancers on survival effect as compared with neoadjuvant CT followed by surgery or surgery alone. Thus, the promising strategy in the treatment of the oesophagus or GOJ cancers would be identified in details and it may be used as reference for selection of clinical treatment.

Three authors (M.XY,S.T,Z.Y) independently selected the trials and extracted data according to the criteria. The following data were collected: author information, year, country, sample size, treatment approach and schedule, median follow-up, R0 resection rate, pathological reaction, overall survival(OS), disease-free survival(DFS), progression-free survival (PFS), metastasis and recurrence rate, mortality and morbidity. Disagreements were resolved by discussion. The OS, DFS, PFS were assessed as the primary outcomes. The secondary outcomes were R0 resection rate, pathological reaction, metastasis and recurrence rate, perioperative mortality and morbidity. Two authors (Z.B, Z.T) independently conducted the quality assessment based on the Newcastle-Ottawa Scale (NOS) which is a semi quantitative method for assessing the quality of studies, and consisted of three main parts: selection (4 points), comparability (2 points) and outcome (3 points). The quality of study was determined on a scale from zero to nine points. Studies with seven or more points were regarded as “high quality”, studies with the points from four to six were regard as “moderate quality”, and otherwise, the study was regarded as “low quality”. The above were done in duplicate with disagreements handled by discussion to reach a consensus.

Data analysis was conducted using the Review Manager 5.3.0. Meta-analyses on overall survival were measured with relative risk (RR), and R0 resection rate, metastasis and recurrence rate, perioperative mortality and morbidity were performed using odds ratios (OR) with its 95% confidence interval (CI) as pooled effect measures. Intention-to-treat (ITT) analyses were conducted in most evaluation. Heterogeneity was assessed using I2 statistics. When I2<50% and P>0.1, the fixed model was conducted; Otherwise, the Mantel-Haenszel (M-H) random model was selected and subgroup analysis or sensitivity analysis were performed. Statistical significance was set at P≤0.05. Forest plots were used to show the results visually and to assess bias.

Flow chart of the literature search 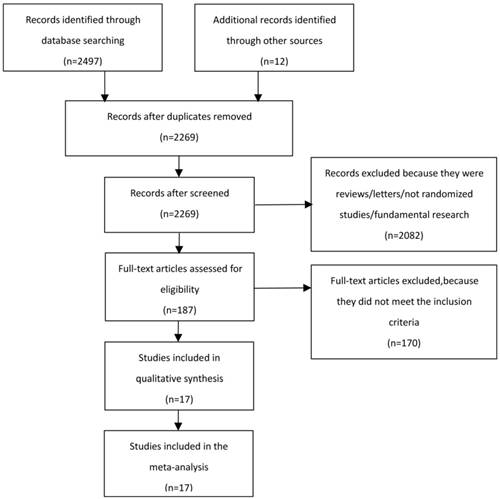 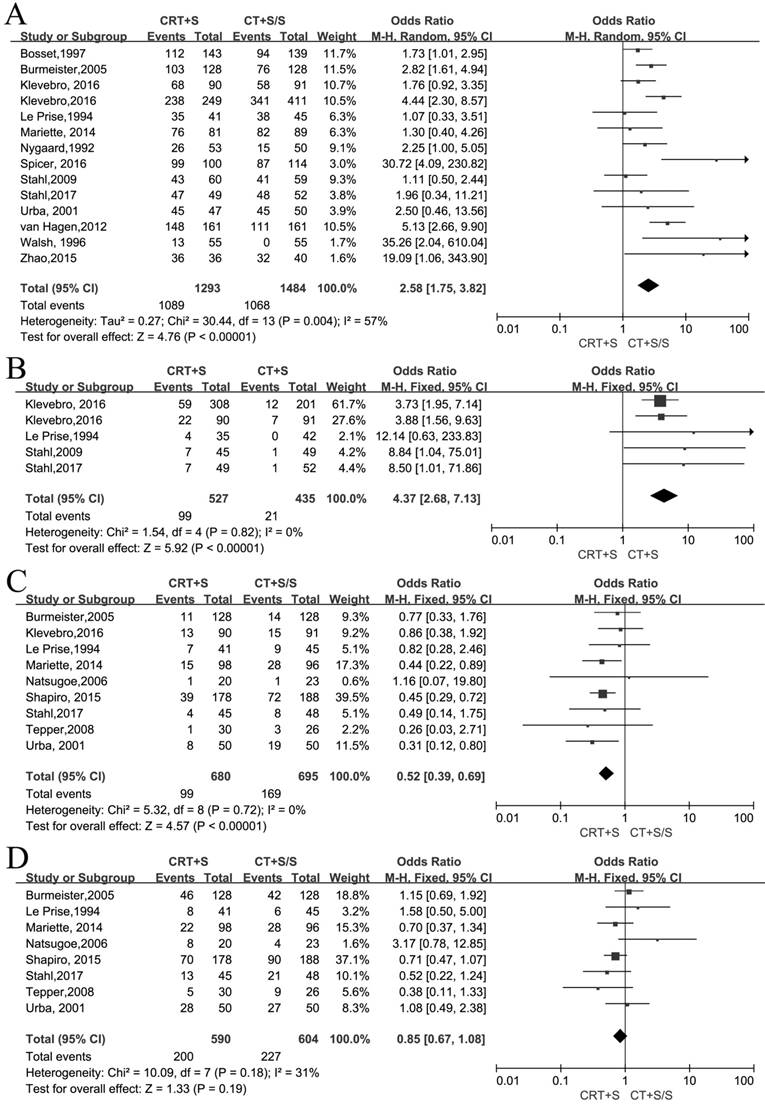 Finally, the funnel plots were used to evaluate the publication bias of included records. As shown in Figure 4, the plots were nearly symmetric. Hence, we didn't find significant publication bias in our meta-analysis. Sensitivity analysis (3 records which were evaluated as 5 scores removed from the procedure) was performed by excluding these 3 records. All indicated that the overall result was robust and the pooled RRs or ORs for outcomes were stable(data not shown). 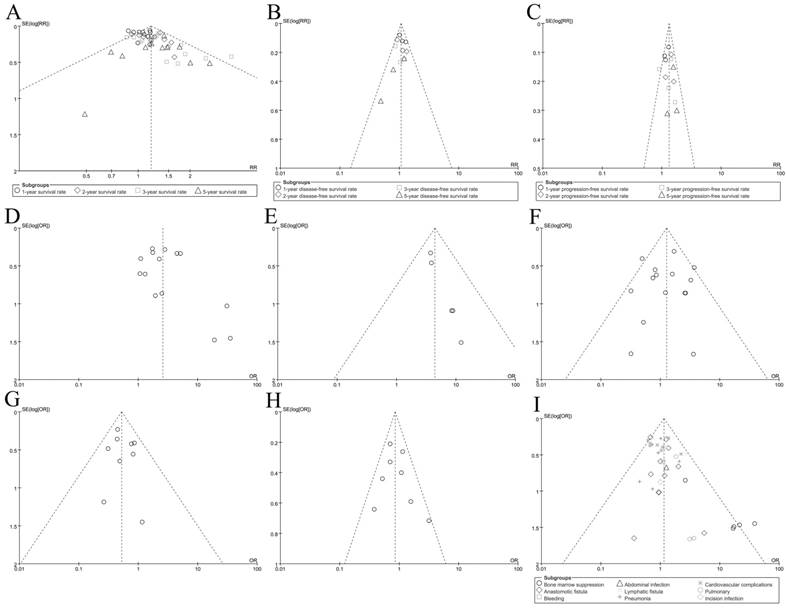 Gastroesophageal malignancies included distal oesophagus, proximal GOJ and distal gastric cancer (GC) [23].Both locally advanced carcinoma of the oesophagus and GOJ were related to poor prognosis due to the lack of effective treatment strategies [24]. Frequently cited multicenter trials such as MRC-OEO2, MAGIC and the FNLCC/FNDD trials on efficacy of a preoperative CT promoted the use of neoadjuvant CT in oesophagus or GOJ tumor, because of the significant survival benefit from neoadjuvant CT. Neoadjuvant CRT has had abundant potential advantages reported in recent decades. In contrast to neoadjuvant CT, most neoadjuvant CRT studies and previous meta-analyses have consistently shown PCR rates of 15 to 25% and increased the chances of R0 resecability to reduce the incidence of local relapse. However, those trials of neoadjuvant CRT have only shown a trend towards improved survival compared with neoadjuvant CT or surgery alone, even although limited exciting research achievements were sill announced[14, 20]. The discrepancies that whether neoadjuvant CRT improved the survival in the oesophagus or GOJ and the effect of the underlying histological subtype in determining the response to neoadjuvant CRT remains uncertain.

Another limiting application of neoadjuvant CRT reason was that a potential increase in the rate of adverse events after radical resection. While downsizing the tumor, controlling latent lymphatic and hematological micrometastasis, radiation also made tissues fragile, edematous or hemorrhagic, increasing possibility of anastomotic leakage, bleeding so much as therapy-related fateful complications [27]. However, we didn't notice that the neoadjuvant CRT plus surgery strategy increase treatment-related mortality. The pooled OR (95%CI, P value) was 1.27(0.95-1.71, 0.11). We also analyzed the incidence rate of adverse event morbidity, which was so called 'a nightmare for surgeon'. Once these adverse events arised, it would seriously affected survival and prognosis of patients with resectable esophagus or GOJ cancers. Our meta-analysis data indicated that neoadjuvant CRT plus surgery could increase incidences percentage of grade3/4 bone marrow suppression and lymphatic fistula. Although there was no significant difference to be observed on the risk of cardiac complications and pulmonary embolism, neoadjuvant CRT boosted the occurring possibility incidences rate of bleed(OR 1.13, 95% CI 0.36-3.59, P=0.84), anastomotic fistula(OR 1.01, 95% CI 0.76-1.35, P=0.94), pulmonary(OR 2.06, 95% CI 0.81-5.19, P=0.13) and incision(OR 1.13, 95% CI 0.56-2.29, P=0.72) infection compared to neoadjuvant CT plus surgery or surgery alone, no significant differences were shown between two arms. The pooled OR(95%CI, P value) for adverse events morbidity was 1.14(0.99-1.32, 0.08),indicating that neoadjuvant CRT plus surgery did not increase the risk of adverse events morbidity. Our results were also consistent with results of Skoropad V'study[28]. However, this seemingly safe strategy was not always reliable if once the radiation dose was superfluous. Radiation could alter the balance between collagen synthesis and matrix degradation. Rieff et al demonstrated that expressions of MMP2 and MMP9 in the normal esophagus were higher than patient in surgery alone group[29,30]. Thus, superfluous dose radiation was positively related to high risk of anastomotic fistula or infection.

Whether neoadjuvant CRT could provide additional survival advantage in potential patients, even in certain subgroups, was still waiting for more evidence due to the heterogeneity in therapeutic regimens and quality of trials included in published meta-analyses. Regarding the heterogeneity of scheme in the trials, it appeared difficult to draw any conclusions on dose-volume parameters and chemotherapy regimens. Data from included 17 RCT trails showed that the total dose of radiation ranged from 30 Gy to 50.4 Gy and the most scheme regimens of chemotherapy consisted of cisplatin and 5-Fu excluding expecting carboplatin/paclitaxed/oxaliplatin/ S-1[31]. Meanwhile, included these trials had a poor perform on recruitment, patient numbers, inadequate statistical power and so on. For instance, the RCT trail from Walsh et al lacked diagnostic computed tomography as an essential staging investigation and its poor statistics[21]. The small number was recruited by Urba et al[19]. Stahl et al' study closed early due to poor accrual[16]. The CALGB-9781 study intended to recruit 500 patients, but due to poor accrual and closed after only 56 patients[18]. In addition, most of included 17 trials were conducted in western countries and the actual efficacy and safety of neoadjuvant CRT in eastern countries were not understood.

The results of this meta-analysis were subject to several limitations: First, the relatively small number of studies and patients from GOJ cancers included. Only two records from the same medical center were included, which is likely to lead to influence meta-analysis of relevant results. Second, because of the lack of data from eastern countries, the conclusions were not global. Ethnic differences among different regions might have different radiochemotherapy sensitivity. Geny Piro et al indicated that different molecular pathways and genetic mutations from regions were involved in the carcinogenesis process of esophago-gastric adenocarcinoma [35].In addition, in order to evaluate the safety and efficacy of neoadjuvant CRT more comprehensively, we included as many literatures as possible conforming to the inclusion criteria. However, these RCT trials were extremely heterogeneous for histotypes, primary site, radiation dose and chemotherapy regimens, which were often mixing more chemosensitive adenocarcinomas with the squamous cell carcinoma subtype. Thus, those did not enable us to draw uniform conclusions.

Nowadays, some prospective clinical trials are carried out in Asia. Limited RCTs from Japan and South Korea are also reported and show that neoadjuvant CRT plays a vital role in offering advantage for survival[32].Above all, further more and cautious prospective RCTs should be designed and carried out. The TOPGEAR and RTOG 1010(NCT01196390) trial are ongoing and the final results are also exciting.

4. Mahadevan A, Carey D. The role of radiotherapy in the surgical management of gastrointestinal cancer. Surg Oncol. 1997;6:201-8

10. Klevebro F, Lindblad M, Johansson J, Lundell L, Nilsson M. Outcome of neoadjuvant therapies for cancer of the oesophagus or gastro-oesophageal junction based on a national data registry. The British journal of surgery. 2016;103:1864-73