Purpose: The aim of the preliminary study was to evaluate the efficacy and safety of 4-week chemotherapy with 5-Fluorouracil and leucovorin (LV5FU2) during the resting periods between preoperative CRT and surgery in patients with LARC.

Conclusions: This preliminary study showed that additional preoperative chemotherapy with LV5FU2 was well tolerable and had an improvement in the downstaging rate and survival. Randomized controlled trial of this strategy is encouraged for definitive conclusions.

Conventional preoperative CRT has a resting period of 4-8 weeks after the completion of treatment [8]. The aim of the present study was to evaluate the efficacy and safety of additional 4-week chemotherapy with 5-Fluorouracil (5-FU) and leucovorin (LV) during the resting period between preoperative chemoradiotherapy (CRT) and surgery in patients with locally advanced rectal cancer (LARC). This approach would promote the potential antitumor regression effects of additional chemotherapy more than preoperative CRT alone. We propose that additional chemotherapy might increase tumor down-staging and represent a more effective sphincter-saving resection through a potential antitumor effect.

Preoperative CRT was delivered to the entire pelvis at 45 Gy with daily doses of 1.8 Gy in 25 fractions, followed by a boost of 5.4 Gy in 3 fractions within 6 weeks, totaling 50.4 Gy with concurrent 5-FU or capecitabine for 6 weeks. Radiotherapy was administered 5 days per week from Monday to Friday with the weekend off. Patients received additional preoperative chemotherapy of two cycles of 5-FU and LV (LV 200 mg/m2 and 5-FU bolus 400 mg/m2 on day 1, and 5-FU infusion 2400 mg/m2 for 46 hrs, every 2 weeks) after preoperative CRT. Surgery was performed at 2~4 weeks following the completion of additional chemotherapy. A lower anterior resection, a coloanal anastomosis or an abdominoperineal resection was performed on the principle of total mesorectal excision (TME). After surgery, the patients underwent adjuvant chemotherapy at four cycles of 5-FU 500 mg/m2 every 4 weeks.

All statistical analyses were performed by using SPSS 24 (IBM Corp., Armonk, NY). DFS and OS were estimated by using Kaplan-Meier curves and a log-rank test. A priori sample size calculation was not possible as we had no reliable estimates for 4 weeks additional chemotherapy with 5-FU plus LV during the resting periods between preoperative CRT and surgery in patients with LARC. Thus, we performed a post hoc power estimate for tumor down-staging rate, OS and DFS. Post hoc power analysis indicated our study had over 90% power for tumor down-staging rate, OS and DFS (two-sided analysis and alpha value of 0.05). Power for tumor down staging rate was calculated based on the results of our study (65.2%) and the historical data (30.0%) [11]. And the power estimates for OS and DFS were based on the results of our study with accrual time 21 month and follow-up time 29 months. PASS 11™ software (NCSS, Kaysville, UT, USA) was used to perform the post-hoc power analysis. The study was approved by the Institutional Review Board of the Chung-Ang University College of Medicine. The requirement of informed consent was waived, as the study was based on retrospective analyses of existing administrative and clinical data. 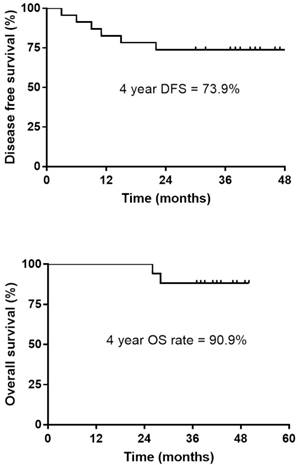 Disease-free survival (DFS) and Overall survival (OS) with or without tumor down-staging. 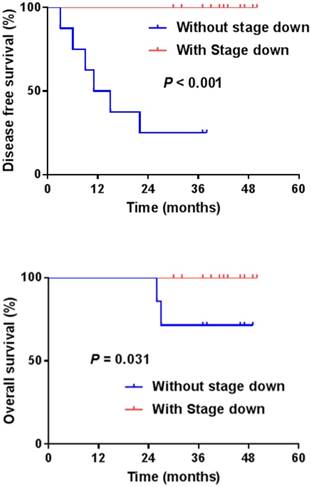 We performed additional chemotherapy with 5-FU plus leucovorin for 2 cycles during the resting period for approximately 8 weeks after conventional preoperative CCRT until surgery for additional tumor size reduction and down-staging. In the present study, the pCR (21.7%) was similar to that other studies; however, tumor down-staging (65.2%), complete resection rate (100%) and organ preservation (91.3%) were improved compared to those in other studies [1, 12]. Similar to the results of previous studies in which the survival rate was improved in patients exhibiting tumor down-staging [7], we showed a significant improvement in the four-year DFS and four-year OS rate in the tumor down-staging group.

Preoperative CRT is currently used as the standard treatment modality in patients with locally advanced rectal cancer; however, distant metastasis is reported in up to 30% of patients, and the survival benefit of preoperative CRT has not been demonstrated [1]. In the present study, the four-year disease free survival rate was 73.0%, similar to the distant metastasis rate (13.0%) reported in other studies [1].

We reported interesting results in terms of pCR rate (21.7%) and down-staging (65.2%). The down-staging rate after preoperative chemotherapy treatment was reported in 65 to 85% of cases [4, 5], with a pCR rate ranging from 20% in nonrandomized studies [13, 14] to 8 to 16% in randomized studies [15]. In other studies, capecitabine, an oral FU pro-drug, was administered at 825 mg/m2, delivered orally twice a day, as an additional chemotherapy during the resting period compared to a previous study on treatment with 5-FU and LV [12]. The pCR (18.0%) and surgery rates (80.0%) in a previous study with additional capecitabine treatment were comparatively low compared to the pCR rate (21.7%) and surgery rate (100.0%) in the present study.

The incidence of sphincter preservation was 39% in preoperative CRT compared with 19% in postoperative CRT [1]. In the present study, a sphincter-saving procedure was highly performed (91.3%) compared with an expected rate of 42% for pretreatment and an expected rate of 80% for additional chemotherapy with capecitabine [1, 12]. In the present study, pCR was detected in 5 patients (21.7%), and 4 of these patients (80.0%) had baseline nodal involvement. We performed rectal MRI after additional chemotherapy to accurately assess the loco-regional nodal involvement of the rectum to clarify the down-staging results.

This study has limitations that it was retrospective and single center data, meaning that it has lower statically power. Therefore these results should be interpreted with caution. In conclusion, the present study showed that additional preoperative chemotherapy with 5-FU and LV during the resting period after 6-week preoperative CRT was tolerable and active and favorably compares with conventional preoperative CRT. We showed a significant improvement in the four-year DFS and four-year OS rates in the tumor down-staging group. However, these results need to be confirmed in larger number, prospective, randomized controlled trials.

We gratefully acknowledege Hyun Kang for support with statistical analysis.

8. Glimelius B. Optimal Time Intervals between Pre-Operative Radiotherapy or Chemoradiotherapy and Surgery in Rectal Cancer?. Frontiers in oncology. 2014;4:50