Top
Introduction
Expression of PTPRE
Regulation of PTPRE activity
Interaction of PTPRE with other...
PTPRE in normal cells
PTPRE in cancer
The similarities and differences...
The scientific and clinic...
Conclusions
Acknowledgements
References

Tyrosine phosphorylation is an important post-translation modification of proteins that is controlled by tyrosine kinases and phosphatases. Disruption of the balance between the activity of tyrosine kinases and phosphatases may result in diseases. Receptor type protein tyrosine phosphatase epsilon (PTPRE) is closely related with receptor type protein tyrosine phosphatase alpha (PTPRA). PTPRE has been studied in osteoclast cells, nerve cells, hematopoietic cells, cancer cells and others, and it has different functions among various tissues. In this review, we summarized the current knowledge about the regulation of PTPRE on cellular signal transduction and its function under normal and pathological conditions.

Receptor type protein tyrosine phosphatase epsilon (PTPRE) is a receptor type phosphatase that is closely related to receptor type protein tyrosine phosphatase alpha (PTPRA), they share high homology [8-10]. PTPRE was identified in 1990 by hybridization with a Drosophila phosphatase cDNA under non-stringent hybridization situation [8]. Later on, the murine PTPRE gene was mapped to chromosome 7 [11, 12] and human PTPRE gene was mapped to chromosome 10q26 [12]. By comparison of the amino acid sequence, human PTPRE shows 94% homology with the murine and rat counterparts [13].

PTPRE has been studied in osteoclast cells, nerve cells, hematopoietic cells, cancer cells and others, and its function shows a tissue specific manner. In this review, we reviewed literatures searched by using Pubmed and summarized the current knowledge about the regulation of PTPRE on cellular signal transduction and its function in various tissues under normal and pathological situations.

PTPRE gene has at least two promotors, and transcription of PTPRE starting from two promotors results in two transcripts [14]. The longer transcript is translated into a 100-110 KD protein that can anchor in the cell membrane with the molecule weight varying when expressed in different tissues [15], this isoform is called membrane type PTPRE (memPTPRE). The shorter transcript that lacks the coding sequence for signal sequence, extracellular domain and transmembrane domain is 1926 bp long. It is translated into a 72 KD protein [15, 16] which is mainly localized in cytosol with weak localization in cell membrane [16, 17], it is called cytosol type PTPRE (cytPTPRE) (figure 1).

In addition to memPTPRE and cytPTPRE, two other PTPRE isoforms were also identified: p67 and p65. Unlike memPTPRE and cytPTPRE that are translated from their corresponding mRNAs respectively, translation of p67 starts from an internal ATG code at position 258 or 84 in memPTPRE or cytPTPRE mRNA respectively. In contrast to memPTPRE, cytPTPRE and p67 that are translated from mRNA, p65 is generated by proteolytic cleavage of memPTPRE, cytPTPRE and p67 [17]. Both p67 and p65 are localized in the cytosol, and they are active in the inhibition of Src-mediated phosphorylation of Kv2.1 since both of them contain the full length of phosphatase domain [17]. Among all four isoforms of PTPRE, cytPTPRE is the only member that can be localized in cell nuclei. Its entry to cell nuclei is mediated by 10 amino acid residues at its N-terminal with residues R4, K5, and R9 particularly important [18]. Besides the aforementioned four isoforms of PTPRE, a 90KD PTPRE is identified in cells expressing memPTPRE. The 90KD PTPRE is considered as a form of memPTPRE lacking glycosylation [16].

Expression pattern of PTPRE isoforms is tissue specific. memPTPRE is highly expressed in brain, testes, lymph node and lung while cytPTPRE is found in spleen, lung and thymus [15, 16]. In hematopoietic cells, cytPTPRE is the dominant isoform [13]. The difference in the tissue distribution of memPTPRE and cytPTPRE could be explained by the differential usages of its two promoters regulated by different mechanisms. [14]. In addition, PTPRE is also expressed in neural tube during embryo development [19].

Similar to most receptor type tyrosine phosphatases, PTPRE has two tyrosine phosphatase domains in its intracellular domain: the membrane proximal domain (D1) and the membrane distal domain (D2). D1 domain is the major catalytic moiety of PTPRE while D2 domain has very weak catalytic activity [20-22]. PTPRE can form homodimer through its D2 domain, resulting in inhibition of its catalytic activity. The dimerization of PTPRE can be regulated by extracellular stimuli such as EGFR activation or increased oxidative stress [23].

Interaction of PTPRE with other proteins

PTPRE is a phosphatase and it can remove the phosphate group from phosphorylated tyrosine residues. A number of cell membrane proteins are the substrates of PTPRE, therefore the signal transduction or activity of these proteins can be regulated by PTPRE. Insulin receptor can physically interacts with both memPTPRE and cytPTPRE, and the association inhibits the activation of insulin receptor and its downstream signaling molecules such as Akt and GSK-3 [25-27]. Similar to the insulin receptor, the signal transduction of the receptor tyrosine kinase PDGFRB signaling can also be inhibited by PTPRE [28]. In addition to the above two receptors, voltage-gated potassium channel Kv2.1 can bind to PTPRE, and PTPRE inhibits Src- or Fyn-stimulated Kv2.1 currents and tyrosine phosphorylation [29].

PTPRE can associate with signaling proteins in the cytosol as well. PTPRE can bind to Jak2 and dephosphorylates Jak2 [30], and the adaptor protein Grb2 can bind to phosphorylated Y695 at the c-terminal of both memPTPRE and cytPTPRE and the binding is necessary for the activation of Src [31, 32]. The Src family kinases are a group of intracellular tyrosine kinases that shares high homology, their functions are redundant but not totally overlapped [33, 34]. Regulation of the activity of Src makes it possible that PTPRE are involved in the regulation of numerous signaling pathways.

Osteoclasts mediate bone destruction and it maintain the bone remodeling together with osteoblasts. The proper function of osteoclasts needs PTPRE, lack of PTPRE adversely affects podosomal arrangement, reduces their association with bone, and inhibits the production of C-terminal collagen telopeptides by osteoclast. The defect of osteoclast function results in increase of trabecular bone mass in PTPRE knockout young female mice [39].

In osteoclasts, loss of PTPRE expression inhibits the phosphorylation and activity of Src, Pyk2, and Rac while Rho activity is upregulated, indicating that integrin signaling is defective. Integrin activation can induce phosphorylation of Y638 in cytPTPRE that is dependent on Src activity, and the phosphorylation is necessary for the binding of cytPTPRE with Src and further activation of Src. Increase of Src activity or inhibition of Rho in PTPRE knockout osteoclasts restores their podosomal stability phenotype [35]. Grb2 is an adaptor that can bind to phosphorylated tyrosine through its SH2 domain. It binds to Y695 at the c-terminal of both memPTPRE and cytPTPRE [31]. The binding of Grb2 to phosphorylated Y695 of PTPRE is necessary for the activation of Src and podosomal organization by PTPRE in osteoclasts [32].

PTPRA is closely related with PTPRE, however it cannot be detected in podosome of osteoclasts. Loss of PTPRA expression has effects on neither bone mass and bone production and resorption, nor production, structure, function, and podosome organization of osteoclasts. The 12 N-terminal residues of cytPTPRE is crucial for podosome regulation, attaching this sequence to cytPTPRA confer a role for PTPRA in osteoclasts. Among the 12 amino acid residues, serine 2 regulates the activity of cytPTPRE and its effects on podosomes [40].

Voltage-gated potassium (Kv) channels are heterogeneous family of proteins that play key roles in brain and cardiac excitability. Changes in cell membrane potential can activate Kv channels, and the channel activation can be modulated by tyrosine phosphorylation. In cultured primary Schwann cells and sciatic nerve tissues, Kv channel activity was upregulated and the Kv1.5 and Kv2.1 α-subunits were hyperphosphorylated. Kv2.1 can bind to PTPRE, and PTPRE inhibits Src- or Fyn-stimulated Kv2.1 currents and tyrosine phosphorylation [29]. Y124 in Kv2.1 was identified as the phosphorylation site by Src and PTPRE. Loss of phosphorylation of Y124 inhibits Kv2.1 channel activity. In newborn mice, loss of PTPRE expression leads to hypomyelination of sciatic nerve axons [41], and which is further supported by that a catalytically inactive memPTPRE delays optic nerve myelination [42]. In the brain cortices of PTPRE knockout mice, tyrosine phosphorylation of Kv1.1, Kv1.2, Kv7.3, and large-conductance Ca(2+)-activated K(+) channels were enhanced. Loss of PTPRE expression results in decreased I(K) density and enhanced after-depolarization [43].

In hypothalamus, PTPRE binds to Jak2 and dephosphorylates Jak2. Leptin can induce phosphorylation of Y695 in PTPRE, which enhances the dephosphorylation of Jak2 by PTPRE. Loss of PTPRE expression makes the mice hypersensitive to leptin and protects mice from weight gain induced by high-fat food. These mice also exhibit increased metabolic rate and decreased adiposity [30].

Cancer is a leading cause of death worldwide, and many types of cancer are caused by aberrant activation of tyrosine kinases [48-51]. It is not surprise to see the implication of PTPRE in cancer such as breast cancer. Expression of PTPRE is relatively low in normal non-transformed mammary gland, while memPTPRE expression is upregulated during pregnancy and mammary gland regression [15]. memPTPRE is highly expressed in c-neu and v-Ha-ras induced mammary tumors in mice, but not in those initiated by c-myc or int-2. Ras induced upregulation of PTPRE expression is mammary gland-specific, which is not seen in other Ras initiated tumors [15]. In breast cancer cell lines, PMA, FGF, and serum stimulation enhance expression of PTPRE through EGFR and Erk1/2 activation. PTPRE contributes to Erk1/2 and Akt activation, improve the cell viability and colony formation of breast cancer cell lines. EGFR, Erk and PTPRE forms a positive feedback loop [52]. Overexpression of PTPRE in murine mammary epithelium leads to mammary hyperplasia and higher occurance of tumor [53], suggesting that PTPRE itself is not sufficient to induce cell transformation.

The similarities and differences of PTPRE in normal and cancer cells

The signal transduction of PTPRE has been studies in various cell types such as osteoclasts, nerve cells, vascular endothelium and mast cells, and its role in the signaling of leptin and insulin were also studied. In contrary to the normal cells, the role of PTPRE in tumorigenesis is not well studied yet. In normal cells, PTPRE inhibits the activation of insulin receptor [26, 27] and PDGFB signaling [28]. Unlike that in normal cells, PTPRE positively regulates the receptor tyrosine kinase EGFR signaling [52]. The underlying mechanisms as to how PTPRE regulates the signaling of different receptor tyrosine kinases in opposite ways between normal and cancer cells remain obscure, and should be further explored.

The scientific and clinic significances of PTPRE 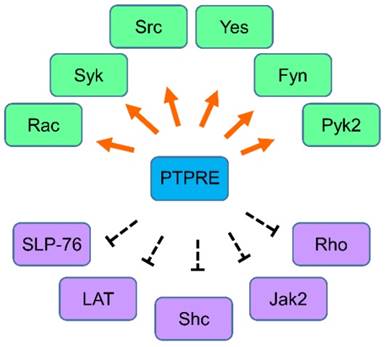 16. Elson A, Leder P. Identification of a cytoplasmic, phorbol ester-inducible isoform of protein tyrosine phosphatase epsilon. Proceedings of the National Academy of Sciences of the United States of America. 1995;92:12235-9

41. Tiran Z, Peretz A, Attali B, Elson A. Phosphorylation-dependent regulation of Kv2.1 Channel activity at tyrosine 124 by Src and by protein-tyrosine phosphatase epsilon. The Journal of biological chemistry. 2003;278:17509-14