Background: A number of mutations in key oncogenes have been identified as important for the initiation and maintenance of lung adenocarcinoma (LAC). This study elucidated the prevalence and prognostic significance of mutations in the epidermal growth factor receptor gene (EGFR) and rearrangements in the anaplastic lymphoma kinase gene (ALK) in patients with surgically resected primary LAC.

Patients and Methods: We retrospectively analyzed 675 consecutive patients who underwent radical resection at a single institution. We concurrently analyzed mutations in EGFR and the Kirsten rat sarcoma viral oncogene homolog gene (KRAS) by reverse transcription (RT)-PCR, and investigated ALK rearrangements by immunohistochemistry. LAC with or without various oncogenic mutations was studied for clinicopathological features and their association with disease-free survival (DFS) and overall survival (OS).

EGFR is a 486-amino acid, 170 kDa receptor glycoprotein with a single transmembrane sequence that was first identified as a binding partner of EGF. As a member of the ErbB receptor TK family, EGFR has an extracellular ligand-binding domain, a transmembrane lipophilic segment, and an intracellular domain with TK activity. On binding a growth factor, EGFR is self-phosphorylated by TK, then it activates cell signaling pathways involved in regulation of the cell cycle, apoptosis, angiogenesis, and cellular proliferation. Specific EGFR mutations induce constant phosphorylation of EGFR, which activates downstream signals. EGFR dysregulation plays a crucial role in the pathogenesis and progression of NSCLC [8, 9], and these findings have led to the development of anticancer drugs. In the early 2000s, gefitinib and erlotinib were the first two EGFR TKIs to be investigated as inhibitors of the EGFR signaling pathway. They were studied in previously treated NSCLC patients [10], and have proven successful in controling this disease [11-13]. More recently, a randomized, international, open-label, phase 3 trial proved that osimertinib had significantly greater efficacy than platinum therapy plus pemetrexed in patients with T790M-positive advanced NSCLC in whom disease had progressed during first-line EGFR TKI therapy [14].

The echinoderm microtubule-associated protein-like 4-anaplastic lymphoma kinase fusion gene (EML4-ALK), generally known as the ALK fusion gene, was first described in 2007. The fusion results from a small inversion within chromosome 2p, leading to expression of a chimeric TK in which the N-terminal half of EML4 is fused to the intracellular kinase domain of ALK. This then activates protein kinase domains and downstream signaling pathways that are important in tumorigenicity. EML4-ALK possesses powerful oncogenic activity both in vitro and in vivo [15, 16], which can be blocked by small-molecule inhibitors that target ALK, supporting a role for EML4-ALK as a key driver of lung tumorigenesis. The overall incidence of the ALK fusion gene in patients with LAC is 5.2%-11.2% [17, 18]. Consequently, it is another important target in the treatment of NSCLC [16]. Crizotinib is an ALK-TKI that plays a central role in this context, having been granted approval by the FDA in 2011.

This study adhered to Reporting Recommendations for Tumor Marker Prognostic Studies guidelines [24]. Six hundred and seventy-five consecutive patients with primary LAC who underwent complete surgical resection were enrolled in this retrospective study. All patients were admitted to the Tianjin Medical University Cancer Institute and Hospital (Tianjin, China) between January 2011 and December 2015, and had a pathologically confirmed diagnosis. Patients who did not undergo curative resection or had a previous history of other cancers or had any anticancer therapies before surgery were excluded. None of the patients in the study cohort had received corresponding molecular targeted therapy before tumor recurrence. Patients with comorbidity that might have affected OS, such as advanced cardiovascular disease, were also excluded from the study.

Most of the patients at a locally advanced stage received two to four cycles of platinum-based adjuvant chemotherapy following surgery (platinum- pemetrexed, taxol, or docetaxol). Clinical data were collected from the hospital's medical recording system and are described in Table 1. Tumors were staged pathologically according to the 8th edition of the tumor-node-metastasis (TNM) classification for lung cancer [25]. Histologic subtypes were determined according to the 2011 IASLC/ATS/ERS international multidisciplinary classification of LAC [26]. The morphology of all samples was reviewed by two experienced pathologists from Tianjin Lung Cancer Center (Z.Z. and Q.Y.) on a blinded basis. Formalin- fixed, paraffin-embedded (FFPE) tumor tissues collected in surgical resection were used. Patients with insufficient or poor-quality tissue for molecular analyses, or inconclusive ALK rearrangements, were excluded.

Following tumor resection, the patients were followed up every 3 months during the first 2 years and every 6 to 12 months over the next 3 years. Tumor recurrence was identified using radiological examination or biopsy. In the majority of patients, interval computed tomography scans were available for review by one thoracic radiologist. DFS was measured from the day of tumor resection until tumor recurrence or death. OS, defined as the time from curative operation to death from any cause, is a direct measure of clinical benefit to the patient. Patients alive or lost to follow-up were censored. Patients without a known date of death were censored at the time of last follow-up. Informed consent was received from patients or their families, and this study was approved by the Research Ethics Committee of Tianjin Medical University Cancer Institute and Hospital.

Clinicopathologic characteristics of patients with adenocarcinoma

DNA extraction, reverse transcription (RT)-PCR amplification, and direct sequencing were performed for the detection of EGFR/KRAS mutations. Genomic DNA was extracted from FFPE blocks divided into 10-15 4-µm thick sections. The purified PCR product was analyzed using an ABI 3130xl sequencer. PolyPhred software [30] was used to analyze the sequence. To validate RT-PCR results, all samples were assessed by direct DNA sequencing.

The associations of genotype with clinicopathological characteristics and treatment types were assessed by Fisher's exact test for categorical data, and the Wilcoxon rank sum test for continuous data. DFS and OS were plotted using the Kaplan-Meier method, and the difference between genotypes was compared using the log-rank test. The Cox multivariate proportional hazard model was used for multivariate survival analysis, and hazard ratios (HRs) and 95% confidence intervals (CIs) were calculated. All statistical tests were performed using SPSS version 20.0 software (SPSS Inc., Chicago, IL, USA). Values of P < 0.05 for the two-tailed test were considered to indicate a statistically significant difference.

A total of 675 patients with LAC (320 males and 355 females) were enrolled in this study, with a median age of 60 years (range, 28-79 years). All patients were diagnosed at various clinical stages according to the latest edition of the TNM Classification for lung cancer: 380 patients at stage I, 73 at stage II, and 222 at stage III. Postoperative adjuvant therapy (chemotherapy, radiotherapy, or biotherapy) was administered to 360 patients. Patient clinicopathologic characteristics are summarized in Table 1.

Prevalence and baseline characteristics of the molecular genotypes

The localization of primary tumors in patients harboring EGFR mutations and ALK rearrangements was as follows: Compared with EGFR-mutated tumors, ALK-positive tumors occurred more frequently in multiple lobes (13.3% vs 5.8%; P= 0.043), and were less common in the upper right lobe (14.7% vs 30.8%; P = 0.006).

Comparison of disease-free survival (DFS) after surgery according to genotype. A. Kaplan-Meier survival curves for ALK-positive and ALK-negative patients. B. Pair-wise comparison of three groups. 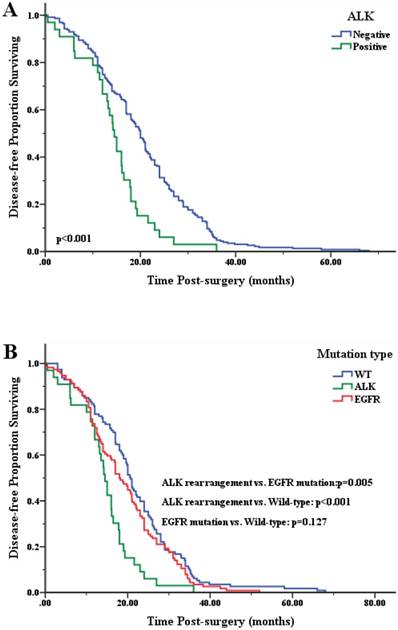 To test the prognostic value of EGFR mutations and ALK rearrangements, we performed multivariate analysis using the Cox proportional hazard model for all variables identified as significant by univariate analysis. Multivariate analyses of DFS and OS are shown in Table 3 and Table 4. Cox's proportional hazard model indicated that EGFR status was an independent variable for predicting OS (P=0.003), while ALK rearrangements were an independent variable for predicting DFS (P<0.001).

Kaplan-Meier curves plots for overall survival (OS) of LAC patients after surgery according to genotype. A. Curve for ALK-positive and ALK-negative patients. B. Pair-wise comparison of three groups. 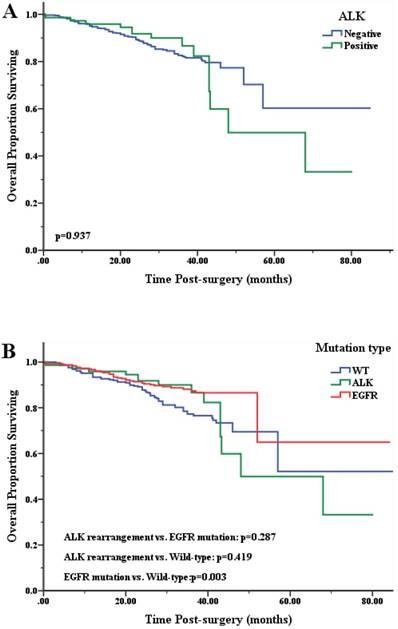 Uni- and multivariate analyses of prognostic factors for disease-free survival

Uni- and multivariate analyses of prognostic factors for overall survival

Several studies have shown that EGFR mutations might be a prognostic predictor for patients with advanced or early NSCLC. Sonobe et al. [5] indicated that stage I adenocarcinoma or large cell carcinoma patients with EGFR-mutated tumors have a higher 5-year survival rate than those with EGFR WT tumors (P = 0.037). Similarly, Chao et al. [47] revealed that patients with EGFR-mutated tumors had significantly longer OS than those with EGFR-WT tumors (P = 0.002), while Izar et al. found that EGFR mutations were an independent prognostic factor in completely resected stage I NSCLC [48]. We observed a significantly longer mean OS after surgical procedures in EGFR-mutated patients than WT patients (P = 0.003), which is consistent with previous studies.

Yang et al. reported that ALK rearrangements were significantly associated with poor DFS in never-smoker patients with surgically resected LAC [49]. Zhou et al. also found that ALK rearrangements were significantly associated with poor prognosis in a stage IIIA subgroup of NSCLC patients. However, in stage IA NSCLC, ALK-positive patients had longer DFS than ALK-negative patients [4]. In our present study, patients with EML4-ALK fusions had a significantly shorter DFS than those with EGFR mutations or WT patients. However, there was no difference in OS. Multivariate analysis also identified EML4-ALK fusion as an independent factor for poor DFS (but not OS) in our study. However, Blackhall et al. [50] showed that ALK positivity was a predictor for better OS in patients with surgically resected LAC, while Kim et al. [46] revealed that the median OS was longer in ALK-positive lung cancer patients than in EGFR-positive or WT patients. The prognostic significance of ALK rearrangements in surgically resected LAC therefore remains inconclusive.

Few studies have made a prognostic comparison of EGFR mutations and ALK rearrangements in patients after surgical resection of early LAC. Kim et al. [46] reported a significantly longer median OS after surgical procedures in ALK-positive patients compared with those patients with EGFR mutations (P=0.0266). We observed a significantly worse DFS in EML4-ALK-positive patients compared with EGFR-mutated ones (P=0.012). However, there was no significant difference in mean OS between the two groups (P>0.05, Figure 2).

The current study has some limitations. It was a retrospective study conducted in a single large institution. Therefore, our findings should be validated by a prospective study of a larger sample from multiple centers. Moreover, because our study reviewed patients from January 2011 to December 2015, we were unable to obtain complete prognostic information, so some 3-year and 5-year survival data are missing. Therefore, the follow-up duration needs to be extended for OS analysis. Additionally, future analysis should obtain details about treatment after tumor recurrence, which could influence the results. Nevertheless, our results are promising, and we are encouraged to confirm them in longer follow-up research and to conduct additional studies on patients with mutations in other oncogenes.

We gratefully recognize the patients who participated in this study. This work was supported by grants from the National Natural Science Foundation of China (NO. 81372467 and NO.81501988).

9. Littlefield P, Jura N. EGFR lung cancer mutants get specialized. Proceedings of the National Academy of Sciences of the United States of America. 2013;110:15169-70