The Risk of Gynecologic and Urinary Tract Cancer with Pelvic Inflammatory Disease: A Population-Based Cohort Study

Purpose: The aim of the study was to determine the association between pelvic inflammatory disease (PID) and breast, colorectal, gynecologic and urinary tract cancer.

Methods: The source of data was a longitudinal dataset compiled by the Longitudinal Health Insurance Database 2000 (LHID2000) which was collected by the National Health Insurance program. Cases of PID, at least two outpatient visits and one admission, were diagnosed from 2000 to 2013. The data for controls, age matched women who were not diagnosed with PID from 2000 to 2013, were also obtained.

Conclusion: Our study found that PID was associated with increased risks of gynecologic and urinary tract cancer but not colorectal or breast cancer. The information may lead to a strategy for cancer prevention and a reasonable healthcare usage through understanding PID epidemiology and controlling the inflammatory responses.

Pelvic inflammatory disease (PID) is an infection-induced inflammation disease of the female upper genital tract. It involves any combination of the uterine endometrium, fallopian tubes, ovaries and pelvic peritoneum [1]. Long-term complications of PID and adverse sequelae after PID are concerned in clinical care for its inflammation resulting in tubal scarring and damage which lead to reproductive disability, such as ectopic pregnancy and infertility [2]. 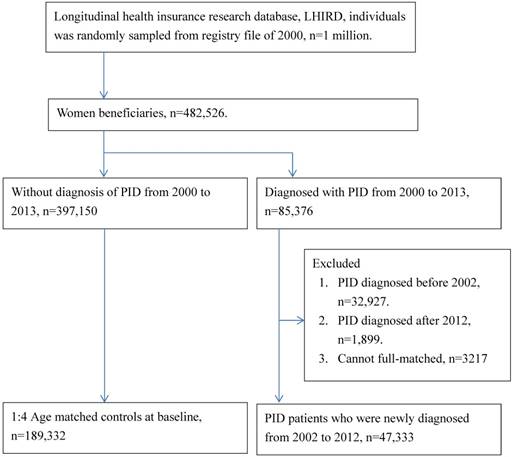 Cancer linked to inflammation was perceived since the 19th century [3]. Inflammation in selected organ may increase the risk of cancer [3]. Cancer-related inflammation links to genetic instability by inflammatory mediators [3]. Molecular pathways, which link inflammation and cancer, have been reported [4-6]. Tumor microenvironment is an indispensable participant in the neoplastic process, proliferation and migration; some of the signaling molecules of the innate immune system are co-opted by tumor cells. Therefore, inflammation is a crucial component of tumor progression [4]. Inflammatory cells and cytokines in tumors could contribute to tumor growth, progression, and immunosuppression [5]. The mediators and cellular effectors of inflammation play important roles for local environment of tumors [6]. Inflammation has been established as an enabling characteristic of cancer and as a hallmark of cancer by molecular biology evidence [7].

Epidemiology researches for the association of PID with cancers have been investigated [8]; researches involving PID in association with a certain type of gynecologic cancers have been proposed. However, the results are not all consistent [8-16]. More investigations are required to clarify the risk of diseases for PID patients [13]. Understanding PID epidemiology leads to reasonable healthcare usage.

The aim of the present study was to investigate the risks of breast cancer, colorectal cancer, gynecologic cancer and urinary tract cancer in the female patients with PID by a population-based cohort study.

The source of data was a longitudinal dataset compiled by the Longitudinal Health Insurance Database 2000 (LHID2000). The LHID2000 contains registration and claim data of 1,000,000 individuals, randomly sampled from registry file of 2000, collected by the National Health Insurance program. There were no significant differences between the patients in the LHID2000 and the original National Health Insurance Research Database (NHIRD) in general distribution. (https://nhird.nhri.org.tw/en/Data_Subsets.html). The NHIRD contains comprehensive information regarding clinical detailed and diagnostic codes based on the International Statistical Classification of Diseases and Related Health Problems codes (ninth revision, clinical modification), namely ICD-9-CM codes.

This is a retrospective cohort study. Flow chart of this study was shown in Figure 1. Cases of PID were diagnosed, individuals with ICD-9-CM code 614,615 (at least two outpatient visits and one admission), from 2000 to 2013 in the national health insurance dataset according to the characteristic criteria of national guidelines for PID. Those PID cases diagnosed before 2002, after 2012 or not been full-matched were excluded. The data for controls, age matched women who were not diagnosed with PID from 2000 to 2013, were also obtained.

For each specific main event, the prevalent cases were excluded from the baseline. All cases, including the PID and control, were followed up until event occurrence, death, or end of study (Dec, 2013).

The two-tailed student t test and chi-square test were used for comparing the difference of continue and category variables between PID and control group. The time to event analysis was performed to estimate the incidence risk of main events between groups.

A total of 47,333 PID cases and 189,332 for control group were included in this study (Figure 1). The characteristics between the PID and control group were shown in Table 1. The significant variables existed between the PID and control group, including urbanization, low income, outpatient visits, length of hospital stay, comorbidities, old events (ectopic pregnancy, colorectal cancer, breast cancer, gynecologic cancers and urinary tract cancers) before baseline.

Our study found that PID was associated with increasing risks of ectopic pregnancy, gynecologic cancer and urinary tract cancer but not colorectal cancer or breast cancer. Most cases of gynecologic cancer were diagnosed within one year after episode of PID.

The result involving the association of PID with ectopic pregnancy of our study is consistent with previous studies [17, 18]. Tubal damage caused by PID increases the risk of ectopic pregnancy and infertility. The association of tubal factor infertility after PID with number and severity of PID episodes was reported by a cohort study using diagnostic laparoscopy (index laparoscopy) to verify disease for clinical suspicious of acute PID patients [17]. The authors also demonstrated that the incidences of ectopic pregnancy in the first pregnancy patients after laparoscopically-confirmed PID and those without PID at laparoscopy were 9.1% and 1.4%, respectively [17]. The increased expression of uteroglobin in damaged fallopian tubes by PID was proposed by Quintar et al [19]. The authors claimed that situation may play an important role in ectopic pregnancy.

The association between PID and colorectal cancer was shown by a matched cohort study through 5-year follow-up period by using the data from the Longitudinal Health Insurance Database 2005 (LHID2005) in Taiwan [20]. The adjusted hazard ratio of colorectal cancer risk for women with PID compared to the comparison cohort was 1.71 (95% CI 1.10-2.65) [20]. The researchers constructed the PID patient group by at least two consensus diagnosis of PID and excluded women younger 13 years or older than 45 years of age. Some important information of the study subjects was not contained in the Database, and this led to a limitation of uniform diagnosis of PID [21, 22]. Re-analyzing biological gradient was performed by the researchers and the colorectal cancer probabilities were related to frequencies of PID visit [22]. The odds ratio of colorectal cancer during visits 1-12 and >12 visits for PID patients compared with the control group were 1.72 (p = 0.019) and 2.84 (p = 0.043), respectively [22]. In our study, we defined the PID patients with at least two outpatient visits and one admission. Rate ratio of colorectal cancer in PID and control groups were 1.281 (Table 2). Adjusted hazard ratio of colorectal cancer with PID exposure, estimated by Cox proportional hazard model in inverse propensity score weighting model, revealed 1.185. There was no significant association between PID and colorectal cancer also shown by KM plotter evaluation (Figure 2).

Incidence rates of main outcomes in PID and control groups. 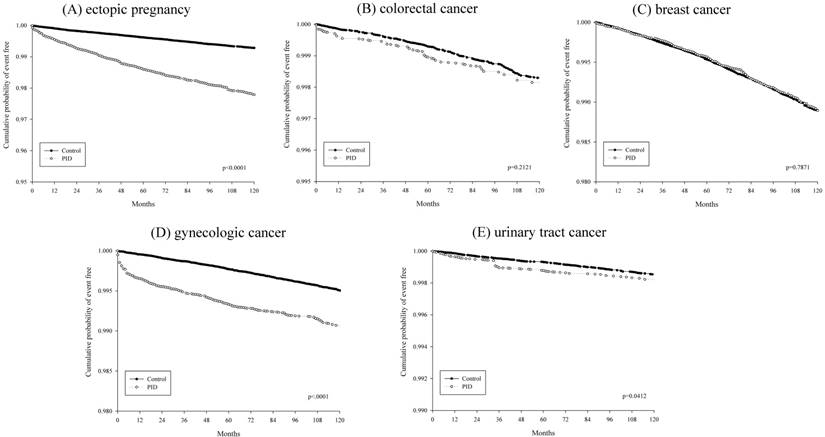 Lin et al. showed an increased incidence of ovarian cancer in those patients with a history of PID (HR 1.92, 95% CI 1.27-2.92) during a follow-up period of three years [15]. The study cohort included ICD-9-CM code 614, 615 PID patients; nevertheless, ICD-9-CM code 616 refers to the inflammatory disease of lower genital tract, i.e. cervix, vagina, and vulva. Wrong classification of study population could exist in this survey [25]. Previous study also shown that the prevalence of PID with endometriosis is higher than the general population [26]. Some studies demonstrated the risks of breast, ovarian and uterine cancers following pelvic inflammatory disease [14, 27]. The authors selected the patients by at least two consensuses PID for the study group. The adjusted hazard ratio of ovarian, breast or uterine cancer in PID group were: HR 1.326, HR: 1.39, and HR: 1.439 respectively in comparison with controls. The researchers concluded that there were no increased risks for ovarian, breast or uterine cancer among women with PID compared to the control group [14].

The role of inflammatory change in ovarian cancer has been surveyed on the point of molecular biology [9]. The authors focused on activated B cells to explain pathophysiology of inflammation and cancer. Chronic inflammation is a crucial role in the pathogenesis of ovarian cancer. Immune cells, fibroblasts, the extracellular matrix and other various components all constitute the tumor stroma [28]. Cancer-associated fibroblasts (CAFs) are one of the components of the tumor microenvironment [28]. The biochemical interactions of cancers cells with their microenvironment may play a critical role in spreading aggressive cancer cells from the primary tumor [29]. Inflammatory cells influence tumor microenvironment which is essential for cancer progression, growth, invasion and metastasis [28] Cancer-associated fibroblasts play a key role in tumor initiation, progression, and metastasis by modifying the components of the inflammatory microenvironment and mediating tumor-promoting inflammation [7].

The cause of ovarian cancer is still unclear [30]. The cellular microenvironment on the development of the ovarian cancer has been emphasized [31]. The oncogenic RAS-transformed ovarian epithelial cells generate pro-inflammatory secretome which diffuse into the stromal and cause fibroblasts senescence. Senescence of ovarian stromal fibroblasts create a secondary pro-inflammatory phenotype and convert the ovarian epithelial microenvironment into a field filled with inflammatory mediators that advance tumor progressing. The inflammatory network contribute the communication between the ovarian tumor epithelium and underlying stromal [31].

The role of inflammation in cancer progression on the ovarian cancer was emphasized [9]. The potential role of infection agents as well as PID in ovarian carcinogenesis has been examined by seven epidemiological studies [32]. Potential carcinogenic bacteria were detected; however, inconsistent results of the association between bacterial infection and ovarian cancer were found. Further researches were warranted [32].

Our study provides epidemiologic evidence that PID associates with increased risks of gynecologic and urinary tract cancer but not colorectal or breast cancer. The useful information may lead to a strategy for cancer prevention and a reasonable healthcare usage through understanding PID epidemiology and controlling the inflammatory responses.

The major limitations of this study are our inability to include taking medicine information which may reduce the risk of developing cancers, including oral contraceptives and raloxifene. Use of oral contraceptives reduces the incidence rate of endometrial, ovarian, and colorectal cancer [35-37]. Raloxifene treatment reduces the incidence of breast cancer in postmenopausal women with osteoporosis and the outcome relevant to raloxifene continues beyond 4 years of treatment [38]. Another limitation of our study was unable to evaluate the effect of different determination of PID. The clinical presentations of PID range from subclinical infection to severe situation which requires hospital admission for procedural intervention or intravenous antibiotics [39]. In this study, the cases with at least two outpatient visits and one admission were evaluated. Those cases with subclinical infection could be misclassified.

29. Mierke CT. The fundamental role of mechanical properties in the progression of cancer disease and inflammation. Rep Prog Phys. 2014;77:076602