Pathological and Prognostic Impacts of FGFR2 Overexpression in Gastric Cancer: A Meta-Analysis

Fibroblast growth factor receptor-2 (FGFR2) protein expression by immunohistochemistry has been reported in up to 60% of patients with gastric cancer (GC). However, the clicopathological impacts of high FGFR2 expression have not been consistent among studies. We conducted this meta-analysis to evaluate the pathological and prognostic significance of FGFR2 overexpression in patients with GC. A systematic search of the electronic databases including PubMed, PMC, EMBASE, and Google Scholar was performed. From ten studies, 4,294 patients were included in the pooled analyses of odds ratios (ORs) with 95% confidence intervals (CIs) for pathological features and hazard ratios (HRs) with 95% CIs for overall survival according to the FGFR2 expression status. Compared with tumors showing low FGFR2 expression, GCs with FGFR2 overexpression revealed deeper depth of invasion (pT3-4) (OR = 2.63, 95% CI: 1.70-4.06, p < 0.0001), higher rate of lymph node metastasis (OR = 1.87, 95% CI: 1.31-2.67, p < 0.0001), and more advanced stage (III-IV) (OR = 1.78, 95% CI: 1.07-2.96, p = 0.03). In addition, patients with FGFR2-overexpressed GC showed significantly worse survival than those with FGFR2-low tumor (HR = 1.40, 95% CI: 1.25-1.58, p < 0.00001). In conclusion, this meta-analysis indicates that FGFR2 overexpression is associated with poor pathological features and prognosis in patients with GC.

Gastric cancer (GC) is the most frequently occurring malignancy in South Korea and fifth common cancer worldwide [1,2]. Despite the development of multidisciplinary treatments, GC is the third leading cause of cancer-related death worldwide [2]. Complete resection with or without perioperative or adjuvant treatment can provide a potential chance of cure for patients with early-stage disease. However, nearly two-thirds of newly diagnosed GC patients present with advanced or metastatic disease. Moreover, more than 60% of the patients who received radical surgery with curative intent develop recurrence within five years [3,4]. For patients with recurrent or metastatic diseases, systemic chemotherapy can prolong median overall survival (OS) from 3-4 months to approximately 10-13 months [5,6]. The combination of chemotherapy with trastuzumab in patients with HER2-positive advanced GC and the introduction of antiangiogenic agent (ramucirumab) or immune checkpoint inhibitor (nivolumab) as salvage therapy in non-selective patients with metastatic GC demonstrated modest survival benefits [7-9]. Despite the improved outcomes with molecular targeted therapy, however, the prognosis of advanced GC still remains poor; therefore, there is a critical need to develop more efficacious therapeutic agents.

The fibroblast growth factor (FGF) pathway is under active investigation as a potential therapeutic target in several types of malignancies [10-13]. FGF receptors (FGFR1-4) are transmembrane tyrosine kinase receptors [14]. FGFR2 gene is located on chromosome 10q26 and functions as FGFR; FGF binding to the monomeric receptor triggers dimerizetion and autophosphorylation of the kinase domain. The protein synonyms of FGFR2 include keratinocyte growth factor receptor (KGFR) and K-sam. This signaling pathway regulates a variety of cellular functions including cell proliferation, migration, and differentiation [13,14]. Therefore, dysregulation of the FGF/FGFR pathway due to gene amplification, mutations, receptor overexpression, or aberrant transcriptional regulation can be associated with cancer development and progression [15-17].

Therefore, we performed a comprehensive meta-analysis to gain a better insight into the pathological and prognostic impacts of high FGFR2 expression in GC. The main aim of this study was to evaluate the correlation of FGFR2 overexpression with survival in patients with GC, illustrating the clinical significance of FGFR2 as a prognostic indicator and potential therapeutic target for GC.

A computerized extensive search of the online databases including PubMed, PMC, EMBASE, and Google Scholar (up to June 2018) was carried out in order to retrieve articles assessing the association of FGFR2 expression (including protein synonyms KGFR and K-sam) and clinicopathological features in GC. The search used the following keywords variably combined: “fibroblast growth factor receptor 2” or “FGFR2” or “keratinocyte growth factor receptor” or “KGFR” or “K-sam” and “gastric cancer” or “stomach cancer.” In case of duplicate publications, the recent papers were selected. The 'snowball' method was used to identify additional relevant articles and the reference lists of identified articles were also hand-searched.

Clinical studies should meet the following eligible criteria: (i) prospective or retrospective cohort study; (ii) study investigating the correlation of FGFR2 expression by IHC with pathological features [depth of tumor invasion (pT), lymph mode (LN) metastasis, and disease stage] or prognosis in patients with gastric adenocarcinoma, including adenocarcinoma of the esophagogastric junction; (iii) the use of adequate IHC method to assess FGFR2 expression status; (iv) sufficient data to estimate odds ratio (OR) with 95% confidence interval (CI) for pathological findings and/or hazard ratio (HR) with 95% CIs for overall survival (OS); (v) studies published only in peer-reviewed journals; and (vi) articles written in English.

Two investigators (HSK and HJJ), working independently and in parallel, screened the titles and abstracts and then reviewed the articles that appeared to meet the predefined inclusion criteria. The following data were extracted from each eligible study and recorded using the predesigned table: first author, year of publication, country, inclusion period, pathological findings (pT, LN metastasis, and disease stage), number of patients, detecting method and cut-off criteria for FGFR2 overexpression, and ORs with 95% CIs for pathological findings and HRs with their 95% CIs for OS. When both univariate and multivariate analysis were performed for OS, the HR with 95% CI from multivariate analysis was extracted.

The strength of the association between FGFR2 overexpression and pathological findings was shown as ORs with their 95% CIs. For the survival analyses, HRs with 95% CIs according to the FGFR2 expression status were combined. Statistical values were directly obtained from the original articles. If ORs or HRs with their 95% CIs were not reported, the Engauge Digitizer software was utilized to calculate them from the corresponding data and Kaplan-Meier curves, respectively. The RevMan version 5.3 software was used to combine the data. The heterogeneity across studies was assessed by the Q statistics and I2 inconsistency test. If there was no significant heterogeneity (p ≥ 0.1 and I2 ≤  50%), the fixed effect model according to the Mantel-Haenszel method was used. When significant heterogeneity was observed (p  <  0.1 or I2 > 50%), the random-effects model based on the DerSimonian-Laird method was selected. Statistical significance of the pooled HR or OR was determined by Z test. The combined OR or HR > 1.0 implies that GC harboring FGFR2 overexpression had worse pathological features or survival, respectively.

Publication biases were graphically evaluated by funnel plots, and the asymmetry of each funnel plot was quantified by the Begg's test and Egger's test [35, 36]. All the p-values were two-sided, with p-value < 0.05 considered significant. 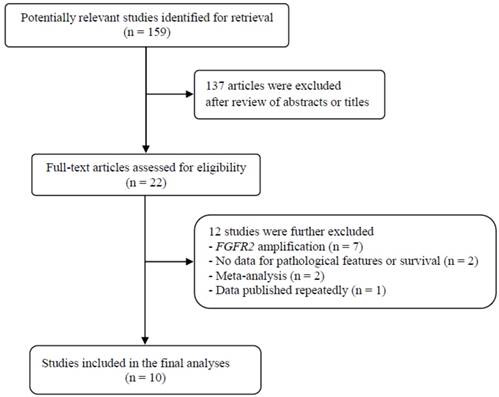 The flow diagram of search process is shown in Figure 1. A total of 159 potentially relevant articles were initially retrieved, but 137 of them were excluded after careful screening of the titles and abstracts. Of the remaining 22 potentially eligible studies, 12 which did not meet the eligible criteria were further excluded. Finally, ten studies were selected for the current meta-analysis [23-32].

The main characteristics and clinicopathological findings of the ten included studies are summarized in Table 1. All the studies were performed retrospectively in Asian populations (from Japan, South Korea, and China). IHC method with a variety of antibodies was used to assess FGFR2 expression status, but the interpretation of IHC staining and cut-off criteria for overexpression were varied among studies. Frequencies of high FGFR2 expression in the included studies ranged from 2.5% [28] to 61.4% [31]. Five studies reported FGFR2 overexpression as a significant adverse prognostic factor [25,27,29-31]. However, the remaining five studies failed to observe statistically significant impact of high FGFR2 expression on survival in the univariate [23,24] or multivariate analysis [26,28,32].

We did not perform publication bias tests for pT and stage because a limted number of studies were included. The funnel plots of LN metastasis (Figure 4A) and OS (Figure 4B) were graphically symmetric. Additionally, Begg's test and Egger's test indicated no evidence of substantial publication bias for LN metastasis (Begg's p = 0.210, Egger's p = 0.431) and OS (Begg's p = 0.464, Egger's p = 0.415).

Summary of the ten included studies 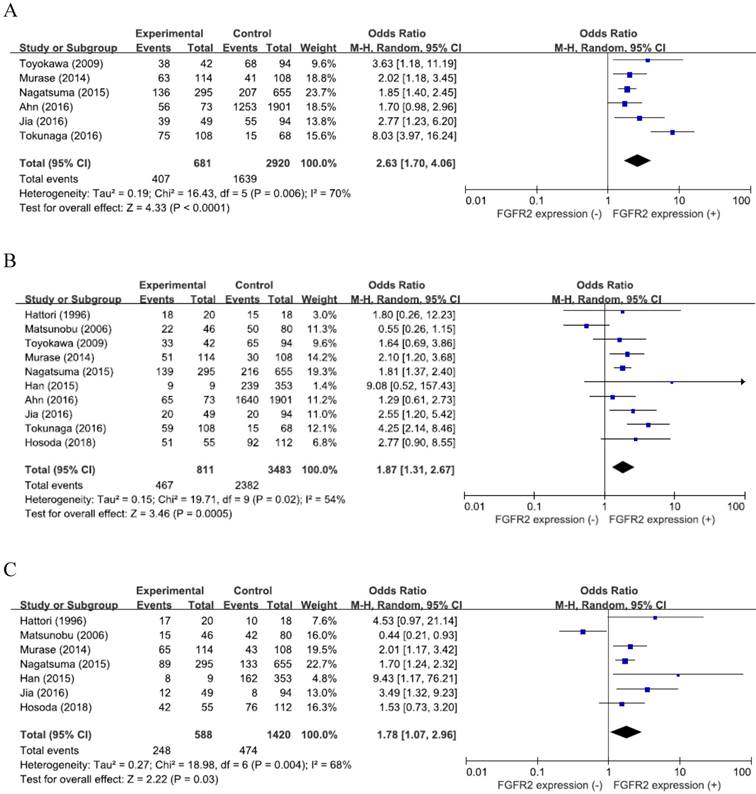 Funnel plots for publication bias regarding LN metastasis (A) and overall survival (B). 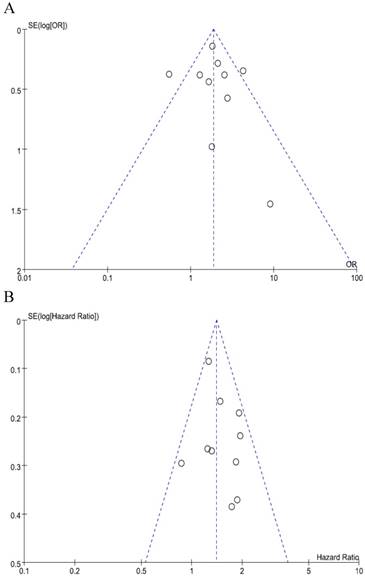 The FGF/FGFR signaling pathway is under active investigation as a potential molecular target for advanced GC [37,38]. However, the prognostic role of FGFR2 overexpression remains controversial. In the current meta-analysis, we evaluated the pathological and prognostic significance of high FGFR2 expression in patients with GC. To our knowledge, this is the first meta-analysis to provide an in-depth analysis of FGFR2 overexpression in relation with survival of patients with GC.

Dysregulation of the FGFR family signaling has been associated with cancer development and progression in multiple cancers including multiple myeloma, cancers of the bladder, prostate, ovary, stomach, and breast [39-41]. Mechanisms for genetic alteration of FGFR2 include gene amplification, mutations or translocations, receptor overexpression, or autocrine FGF signaling. The FGFR2 gene undergoes alterative splicing in the third immunoglobulin domain, leading to two isoforms of the FGFR2 receptor (IIIb and IIIc) with different ligand binding. In FGFR2-amplified GC, the FGFR2 IIIb isoform, not IIIC, is overexpressed [29,42]. In GC, FGFR2 amplification is significantly associated with FGFR2 overexpression [29,31]. While FGFR2 amplification has been observed in up to 15% [31], FGFR2 protein by IHC in GC is more frequently overexpressed [31,32]. In the included studies of this meta-analysis, frequencies of FGFR2 overexpression varied from 2.5% [28] to 61.4% [31]. The incidence of immunohistochemical expression of FGFR2 protein might differ between histological subtypes according to the Lauren's pathological classification [29]. In the study by Hattori et al., FGFR2 overexpression was detected in 20 of 38 diffuse-type GCs, but in none of 11 intestinal-type lesions [23]. However, Inokuchi et al. failed to observe the significant difference in the incidence of FGFR2 overexpression between diffuse-type GC and intestinal-type GC [33].

Our study has some inherent limitations. First, the included studies showed differences in the IHC method and cut-off criteria for high FGFR2 expression, disease stage, treatments, and other demographic or clinicopathological data. Second, almost all studies were retrospectively performed and therefore might carry the biases of the retrospective design. Third, all included studies had been performed in Asian countries. Thus, the prognostic significance of FGFR2 overexpression in GC still needs to be verified in Western populations. Finally, the substantial heterogeneity observed among studies could not be completely interpreted although the random-effects model was selected for pooling ORs regarding pathological features.

In conclusion, this meta-analysis and systemic review summarized the existing data regarding FGFR2 expression and survival outcomes in patients with GC. The results indicate that FGFR2 overexpression is associated with poor pathological features and worse survival in GC, suggesting that FGFR2 is a valuable prognostic biomarker as well as a potential therapeutic target. However, large prospective studies using standardized IHC method based on the homogeneous populations are warranted to validate the prognostic significance of FGFR2 expression in patients with GC.