Background: Bladder cancer is one of the most common malignancies in urologic system. The glucocorticoid-inducible kinase 2 (SGK2) expression and function were largely unknown in cancers. Current study was aimed to investigate the role of SGK2 in bladder cancer and its potential mechanisms.

Bladder cancer (BCa) is one of the most common malignant genitourinary tumors, with high morbidity and mortality rates [1]. At initial diagnosis, approximately 75% of patients have non-muscle invasive bladder cancer (NMIBC) associated with a favorable prognosis. However, about 25% patients present with muscle-invasive or metastatic disease associated with a relatively poor prognosis [2]. Early diagnosis with individualized treatment and follow-up is critical to a successful clinical outcome [3]. Despite great efforts in diagnosis and treatment methods, patients with bladder cancer suffer from high recurrence rates and poor clinical outcomes for advanced disease [4]. Therefore, it is of great significance to identify specific molecular biomarkers for early diagnosis and clinical therapeutics in bladder cancer patients.

The glucocorticoid-inducible kinase (SGK) family has three isoforms: SGK1, SGK2 and SGK3. SGK2 and SGK3 share 80% homology with SGK1 in their kinase domains, which can be activated by 3'-phosphoinositide-dependent kinase-1 (PDK1), placing them under the regulation of the phosphoinositide 3'-kinase (PI3K) signaling pathway [5]. Previous studies reported that SGK1 and SGK3 played vital roles during the progression of various cancers [6, 7]. However, very few studies investigated the function of SGK2 in cancer and its role in bladder carcinoma remains unclear. Similar to SGK1 and SGK3, SGK2 also can activate certain sodium and potassium channels, indicating it may be involved in the physiological and pathological processes regulation [8]. Thus, in the present study, we investigated the role of SGK2 in bladder cancer and its potential mechanisms by in vitro study and TCGA clinical analysis.

The target plasmids include as follows: sh-vector, shSGK2, oe-vector, oeSGK2. The above plasmids with the packaging plasmid psAX2 and envelope plasmid pMD2G, were transfected into 293T cells by calcium chloride transfection method, respectively. The shSGK2 sequences were as follows: Sense: GCACCTGAAGTGCTTCGGAAA, anti-sense: TTTCCGAAGCACTTCAGGTGCT. After 48h later, the virus supernatant was directly added to cells in 6-well plate (or immediately frozen in -80 ℃ freezer for future use) maintaining for 24h, and after 48h culture, we collected the cell protein to test infection efficiency.

The cell suspension with 500 cells/group were placed into a 6cm plate. Cells were cultured with 3 ml media at 37°C incubator. After 2 weeks of cultivation cells were gently washed with PBS, fixed with formalin and stained with 0.1% crystal violet, the cloning efficiency was determined.

Cells from each group were seeded in 6-well plates at around 90% confluence. Subsequently, we utilized a 200ul pipette tip to create symmetrical wounds. After washing with PBS twice, cells were incubated with non-serum DMEM medium for 24 h. Migration pictures were taken at 0h and 24 h after drawing the wound. The wound distance of 6 random fields per well at 40× magnification was measured by Image J software. Each experiment was performed in triplicate.

IP was performed according to the protocol. Briefly, after cold PBS washing, the UMUC3 cells (3*15 cm plate dishes) were scraped into lysis buffer containing protease inhibitors for 30 min on ice. After ultrasound, sample lysis was centrifuged at 14,000×g for 20 min at 4 °C. The supernatants were incubated with normal IgG or anti-SGK2 antibody and protein A/G-beads. The precipitated complexes were washed with lysis buffer and boiled for 5 min in SDS sample buffer. β-catenin antibody were used for western blot analysis.

Molecular function of SGK2 in bladder cancer based on TCGA database

The SPSS 19.0 (Chicago, IL, USA) and GraphPad 6.0 software were used to data analysis. Results were expressed as the means ± standard deviation (SD). The t-test and one-way analysis of variance (ANOVA) were performed. P < 0.05 was considered to have statistical significance.

To investigate the role of SGK2 in bladder cancer, we retrieved TCGA database to verify its mRNA expression differences between tumor and para-tumor tissues, and identified that SGK2 expression in tumor group was not significantly increased compared with para-tumor group (P > 0.05) (Figure 1A). In addition, we also checked the Oncomine database, to further verify the association between SGK2 copy number variations (CNVs) and tumor status, and identified that CNVs was positively related to high pathological and clinical stages, as well as the recurrence status (Figure S1).

To investigate the effects of SGK2 expression on migration and invasion of bladder cancer cells, wound healing and transwell assay were applied. The results showed that knocking down SGK2 expression in J82 and UMUC3 cell lines significantly decreased cell migration and invasion abilities. Inversely, these abilities were significantly increased after SGK2 overexpression in T24 cell line (Figure 3A-3C). 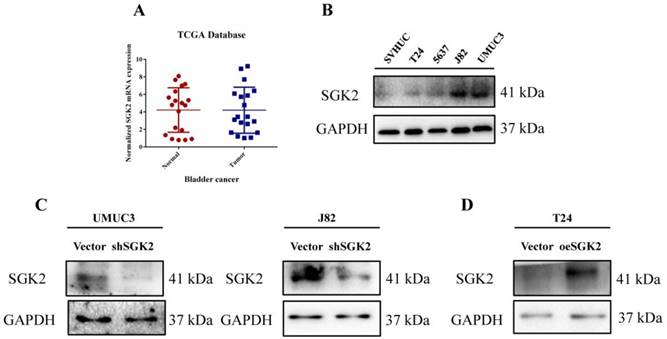 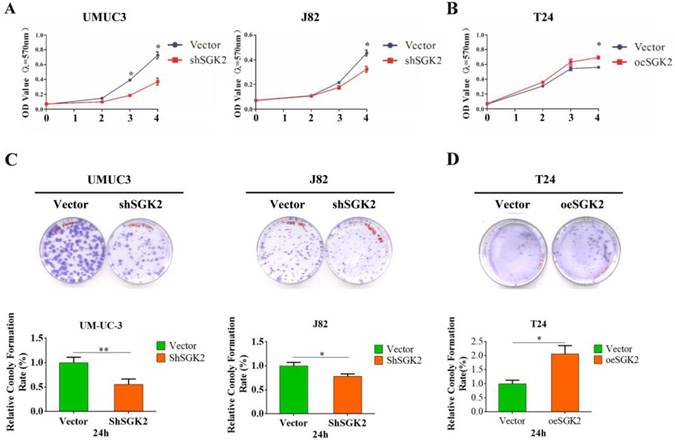 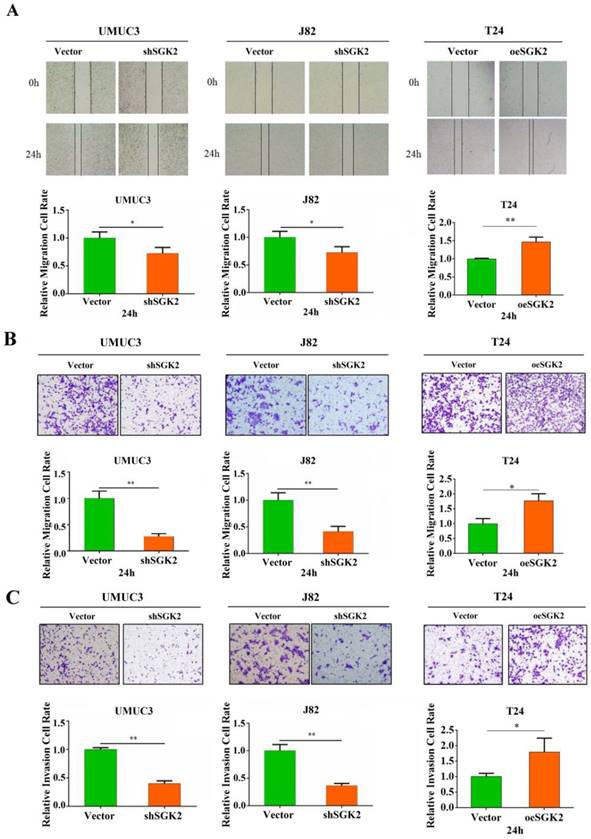 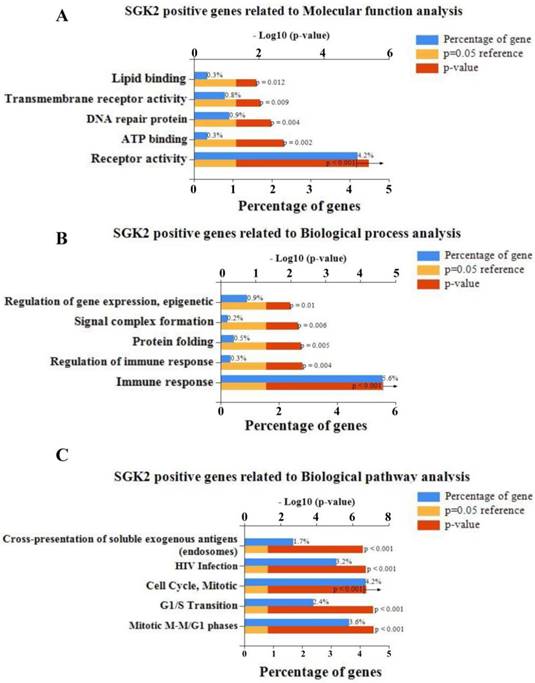 To further evaluate the interactive relationships among genes that are positive or negative related to SGK2, we mapped these genes to protein network through FunRich software and identified that c-Myc was the key enriched interactive protein in SGK2-positive gene network (Figure S3), while GRB2 was in SGK2-negative gene network (Figure S2D). When retrieved references [9-10], we identified that c-Myc belonged to β-catenin/c-Myc pathway, and plays a more critical role during tumorigenesis rather than GRB2.

Based on molecular function results, we further using WB assay to test whether β-catenin/c-Myc pathway involved in bladder cancer progression by acting as the downstream targets of SGK2. The result showed the protein levels of β-catenin and c-Myc were significantly decreased after down-regulating SGK2 expression in UMUC3 and J82 cells (Figure 5A). On the contrary, the protein levels of these genes were significantly increased after overexpressing SGK2 in T24 cell line (Figure 5B).

To further dissect the mechanism that how SGK2 affect c-Myc and β-catenin, we first searched some publications which showed β-catenin (encoded by CTNNB1 gene) was an upstream of c-Myc [9]. Thus, we mainly focused on the regulation between SGK2 and β-catenin. As previously studies found, the kinase could regulate the expression of downstream genes by directly phosphorylation or bind with them, influencing their protein stability [10]. Here, we applied the immunoprecipitation (IP) assay and our result indicated SGK2 could directly interact with β-catenin at protein level (Figure 5C). To further investigate whether SGK2 could affect the β-catenin protein stability, 10 µM MG132 (a proteasomal inhibitor) assay was applied, and he result revealed that MG132 abrogated shSGK2 induced inhibition of β-catenin protein expression in UMUC3 cell (Figure 5D). To further confirm that SGK2 affect β-catenin protein synthesis, T24-vector and T24-oeSGK2 cells were pretreated with CHX (10 µg/mL) for 0h, 3h, 6h. The result showed a time-dependent decrease in β-catenin protein expression in these two cell lines exposed to CHX. However, the decrease speed was marked slower in T24-oeSGK2 than T24-vector group (Figure 5E). These results support the hypothesis that the SGK2 could directly bind with β-catenin to regulate its expression through stabilizing its protein, and thus regulate the downstream gene c-Myc to influence bladder cancer. 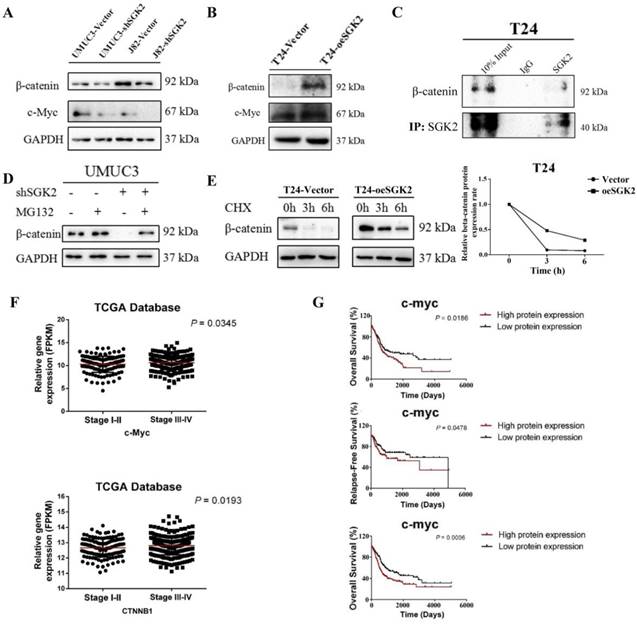 Bladder cancer is one of the most common malignancy among urinary system tumors, with an estimated 429,800 new incidence and 165,100 mortality occurred in 2012 worldwide [11]. It is easy to recurrence and progression, which needs lifetime monitoring after diagnosis, bringing great burden to the society [12]. However, there is no specific and efficient targeted therapy till now. Therefore, finding potential biomarkers and identifying its underlying mechanisms may aid us to discover novel therapeutics to better fight against bladder cancer.

Here, our in vitro study demonstrated that silencing SGK2 in bladder cancer significantly decreased cell proliferation, migration and invasion. Inversely, when overexpressing SGK2, cell proliferation, migration and invasion were significantly increased. In addition, we analyzed the TCGA database to verify these genes which are positive or negative related to SGK2. FunRich software was also used to predict the interaction within these positive and negative genes, and identified that c-Myc was enriched in positive genes connecting with others. Since there was a publication suggested that SGK2 can interact with β-catenin pathway to promote hepatocellular carcinoma progression [20]. Therefore, we detected c-Myc and β-catenin expression, and identified these proteins are significantly increased or decreased after overexpressing or knocking down SGK2, respectively. In addition, results from IP assay as well as protein stability assays using MG132 and CHX indicated SGK2 could interact with and stabilize β-catenin protein. And according to references that c-Myc could be regulated by β-catenin, which was the key factor of β-catenin pathway. Thus, we predicted that SGK2 could regulate bladder cancer progression via β-catenin/c-Myc pathway.