Purpose: Based on a large-population analysis, we aimed to estimate the incidence and survival of bone metastases (BM) in initial bladder cancer (BC) patients and to identify the risk and prognostic factors of BC patients with BM.

Patients and methods: Using the National Cancer Institute's Surveillance, Epidemiology, and End Results (SEER) database, bladder cancer patients diagnosed between 2010 and 2014 were retrieved. Multivariate logistic and Cox regression analyses were employed to identify risk factors and prognostic factors for BM in BC patients. A Kaplan-Meier analysis with log-rank test was used to estimate the overall survival for BC and the difference between the survival curves.

Results: A total of 1,223 (1.39%) BC patients were diagnosed with de novo BM. Variables such as age between 41 to 60 years, black race, unmarried status, higher T stage, higher N stage, poor tumour differentiation grade, lung metastases, liver metastases, and brain metastases were positively associated with BM occurrence. The median survival for BC patients with BM was dramatically decreased to 4.0 months. Factors including advanced age, absence of surgery, and presence of lung, liver, or brain metastases all predicted worse survival.

Conclusion: BM can dramatically decrease the survival of bladder cancer patients. The findings of the present study can provide population-based identification of risk and prognostic factors for BC patients with BM at initial diagnosis, which can be used for BM occurrence prediction and individualized treatment plan-making.

Bladder cancer (BC) is the seventh-most common malignancy and the second-most common urological malignancy in men [1]. It was reported that annually, the number of new BC cases were more than 79,000, and annual death cases led by BC were more than 16,000 [2]. Patients with metastatic BC generally have a poor prognosis, surviving just a few months because of the ease with which it invades the muscle layer [3]. In previous studies, approximately 10-15% of BC patients were reported to present at diagnosis with metastatic disease [4,5]. Bone metastases (BM) were reported to be correlated with skeletal complications and decrease survival and quality of life in urogenital neoplasms patients [6-8].

It is widely accepted that early diagnosis of BM from BC could benefit from timely medical intervention and skeletal-related events (SREs) prevention [4,7]. Currently, there are no screening guidelines for performance of routine evaluation of BM in BC patients. Clinically, diagnosis of BM in BC patients mainly relies on bone scan and PET-CT scanning. However, considering the high cost burden of these tests, neither bone scan nor PET-CT can be used as routine screening strategies. Additionally, it was reported that tumour markers in BC are not sensitive enough to predict BM [9]. Thus, studies looking into risk factors for BM in BC are warranted.

A new study based on 902 patients with BC suggested the incidence of BM is 5.5% [5]. That study also concluded that concentrations of alkaline phosphatase (ALP) >116 U/L, HB <37.5 g/L and calcium >2.54 mmol/L were the main risk factors that led patients with BC to develop BM [5]. However, to build an accurate and portable BM-preventive system for BC, knowledge of additional common clinical risk factors was needed. Accordingly, to further summarize the epidemiological characteristics and prognosis of metastatic BC and to find more risk factors for BM, the present study was performed.

Flow-chart of the participants' selection. 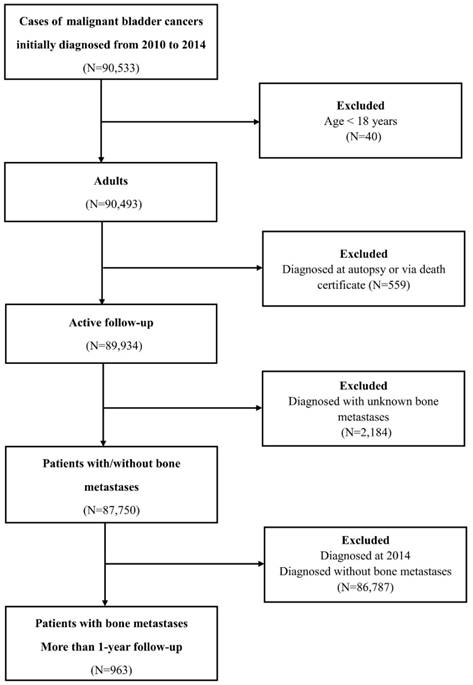 National Cancer Institute's Surveillance, Epidemiology, and End Results (SEER) is an open access database that provides cancer incidence and survival data from 18 established cancer registries across the United States, comprising approximately 30% of the total US population. SEER cohort is a widely used database, with complete demographic and clinical data and long-term, high quality follow-up for assessing cancer epidemiological characteristics around the world.

The SEER database was employed in the present study. The incidence and risk factors for BM with initial BC were analysed. Meanwhile, for BC patients presenting with BM at diagnosis, survival estimates and prognostic factors were summarized.

Patients diagnosed with bladder cancer were selected from the SEER programme between 2010 and 2014, because sites of metastases were not collected until 2010. The datasets generated and/or analysed during the current study are available in the SEER database. (Information Management Service, Inc. Calverton, MD, USA, https://seer.cancer.gov/data/). Data on the primary site labelled “bladder cancer (C67.0-67.9)” was identified. The exclusion criteria were as follows: patients <18 years old (adult's patients); diagnosed with carcinoma in situ and benign; diagnosed at autopsy or via death certificate; unknown BM or follow-up. To identify BM risk factors, 87,750 patients within the SEER database diagnosed with BC with definite details about BM from January 1, 2010, to December 31, 2014, were selected. Among those, for survival analysis, 963 BC patients with BM who were initially diagnosed between 2010 and 2013 were retrieved. (Figure 1)

The SEER database is an open public database, and the release of data from the SEER database does not require informed patient consent because cancer is a reportable disease in every state of the United States. The present study complied with the 1964 Helsinki Declaration and its later amendments or comparable ethical standards.

To determine the risk factors for developing BM at diagnosis, univariate and multivariate logistic regression were performed. Patients' clinical data were collected: age (≤40, 41-60, 61-80 and ≥81 years), sex (female and male), race [white, black, AI (American Indian/Alaska Native), and API (Asian or Pacific Islander)], marital status (married and unmarried), insurance status (insured and uninsured), primary tumor (T) stage (T1, T2, T3, and T4), regional lymph node stage (N0, N1, N2 and N3), tumor differentiation grade (grade I, grade II, grade III, and grade IV), the presence or absence of lung metastases, liver metastases, or brain metastases. The primary goal of the survival analysis was to determine overall survival, defined as the time from diagnosis of BC to all causes of death. Survival rate was calculated using the Kaplan-Meier method, and the difference between survival curves was tested by log-rank test. At the same time, based on these factors, combined with the factor of surgical treatment of primary site (none or yes), a multivariable Cox proportional hazards regression was utilized to investigate the associations with overall survival among BC patients with BM.

All the data were obtained using SEER*Stat Software version 8.3.5. All statistical analyses were performed using SPSS 23.0 (IBM Corporation, Armonk, NY), and all charts of survival were prepared by MedCalc 15.2.2. Two-sided P values less than 0.05 were considered as statistically significant.

Survival and prognostic factors for BM

It was reported that approximately 5% of the BC patients presented initially with metastatic disease, with bone being the second-most affected organ and it was reported to occur in 30% to 40% patients with metastatic BC [10,11]. With the largest population known to date, this study looked into the incidence of BC patients with BM at diagnosis and showed 1.39% of the entire BC cohort was identified with BM at diagnosis.

The identification of the risk factors for BM development in BC patients makes it possible to guide physicians in the management of the high-risk patient of developing metastasis, increase the quality of life and decrease skeletal related events. Based on our risk factors analysis, we determined that BC patients are likely being diagnosed with BM, when they present with a series of factors, including age between 41 to 60 years, black race, unmarried marital status, higher T stage, higher N stage, poor tumor grade, and the presence of lung, liver, and brain metastases, which was in line with other urinary system cancers [12-14]. Accordingly, the examinations such as bone scan may be considered as an optional method for the patients with the aforementioned factors for BM development.

Additionally, black race was proved to be one of the risk factors for BM at diagnosis, which was consistent with other reported cancer types [13,15,16]. Previous studies also reported black patients showed higher-stage disease and worse disease-specific survival compared with white patients [17,18]. Further studies looking into the potential explanations for black patients' poor survival in metastatic tumor and the access to care, quality of care and treatment plans for black BC patients with BM is warranted.

In the present study, BC patients who presented with BM at diagnosis showed a marked decrease in survival rates compared with BC patients without BM occurrence, the median OS for the BM cohort was only 4 months. In the previous study, the 5-year cancer-specific survival following a diagnosis of metastatic BC was reported to be only 8% [19]. Our results further proved the poor survival of BC patients with BM at diagnosis. The latest study suggested that among the three most common genitourinary neoplasms, compared with median survival times for patients with BM in prostate cancer (210 days) and kidney cancer (182 days), survival for bladder cancer (68 days) was the worst [20]. Based on our prognostic factors analysis, we clarified that BC patients with BM at diagnosis were associated with a significantly higher risk of mortality when they presented with a series of factors, including advanced age, absence of surgery, and presence of lung metastases, liver metastases, and brain metastases. The effect of metastatic sites on patients' prognosis among several neoplasms was studied [21,22]. Liver metastases, bone metastases, and brain metastases have been proven to be independent unfavourable prognostic factors for BC patients [23].

To our knowledge, our study is the first to analyse prognostic factors for BC patients with BM. Physicians should pay more attention to their patients' presentation with the revealed factors. Early supportive treatment and intimate observation should be considered for these patients. Targeted treatment strategies and medical care should be paid on the BC patients with high risk factors for death, to prolong the survival time and implement the tertiary prevention. Further research should be performed to find more prognostic factors to build an accurate predictive system for BC patients with BM. 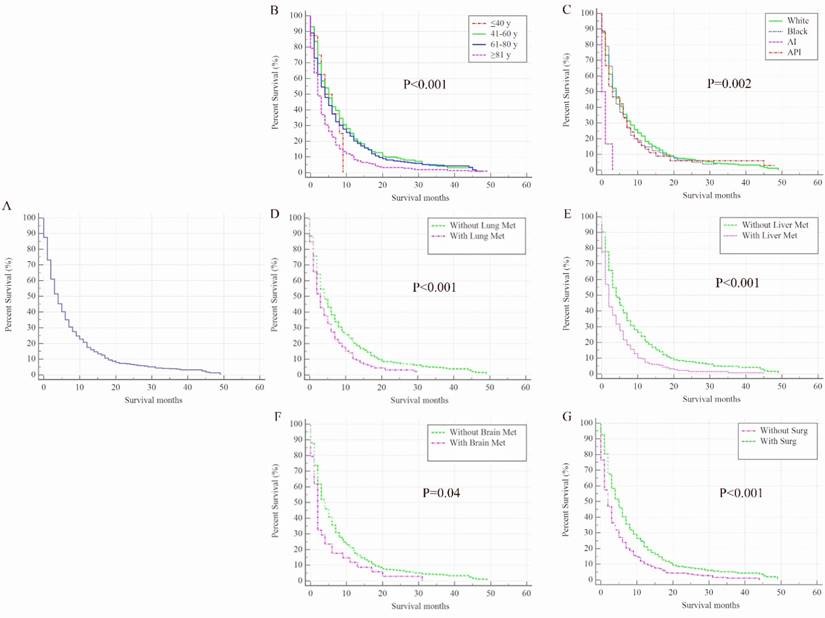 The major limitation of the present study came from the SEER database itself, as the real BM rate in BC patients might be underestimated for nonrecording in asymptomatic cases. In addition, information on skeletal-related events, thought to be one of the most important prognostic factors in urologic malignancies, were not available. Additionally, the present study was performed based on the SEER cohort and the results were not validated by external dataset. More related studies were needed to further confirm the results in the future to validate the extrapolation of results.

The incidence of BM in newly diagnosed BC patients was approximately 1.39%. BM dramatically decreased the survival of BC patients. Bone scan should be considered a routine examination for BC patients of black race at initial diagnosis. The risk and prognostic factors for BC patients with BM identified herein may provide the basis for early detection of BM in BC patients, and guide clinicians to choose targeted treatment options to promote their survival.