Retroperitoneal dedifferentiated liposarcoma: Analysis of 61 cases from a large institution

Methods: The clinicopathological variables and treatment strategies of 61 RP DDLS patients who underwent surgical resections at a single institution between September 2005 and September 2016 were reviewed. Kaplan-Meier and Cox regression methods were conducted for survival analyses.

Liposarcoma (LS) represents one of the most common soft tissue sarcomas (STS), accounting for nearly 20% of new diagnosis [1]. According to Evans Classification, LS can be classified into 5 subtypes: well-differentiated (WDLS), myxoid (MLS), dedifferentiated (DDLS), round-cell (RLS), and pleomorphic (PLS) [2]. Evans defined DDLS as WDLS with cellular non-lipogenic spindle cell or pleomorphic sarcoma, the spectrum of DDLPS was expanded to include WDLPS with low-grade dedifferentiation [3]. DDLS accounts for approximately 18% of all LS [4], while a recent study of 231 LS patients reporting 13.9% in Asian population [5].

Most commonly occurred in retroperitoneal (RP) [1], DDLS is a highly malignancy generally affecting adults in the 6th to 7th decades of life [6]. The majority of (90%) DDLPS arises de novo, whereas 10% developed from pure WDLS [7-9]. Based on different histologic subtype and different primary site, the natural history of LS can vary markedly from a locally recurrent tumor to a highly malignancy that bears a grim prognosis. However, hitherto much of the existing studies of LS are either site specific (ie, RP) [8, 9] or histology specific (ie, DDLS) [1, 7]. Only one RP DDLPS-specific literature analyzed the clinicopathologic features identify prognostic factors to facilitate clinical practice [9]. The scant of study focusing specifically on RP DDLPS of Asian population makes such research in urgent need.

Therefore, the aim of this study was to analyze the clinicopathologic features of RP DDLPS among Asian population and identify the prognostic factors using data collected from a single-center.

This study was approved by the Ethics Committee of Fudan University Shanghai Cancer Center and was performed in accordance with the approved guidelines. Written informed consent was obtained from all patients. The criteria for inclusion were as follows: (1) surgically resectable localized disease (without distant metastasis) at the time of diagnosis, patients with biopsy only were excluded (2) no severe surgical complications leading to death (One patient with severe intra-abdominal infection was excluded) (3) histologically confirmed diagnosis of DDLS (4) completeness of follow-up data and clinical information, including patient demographics, tumor size, tumor grade, blood loss, admission status, extent of resection, tumor integrity, concomitant organ resection, multifocality, adjuvant treatment records. Eventually, 61 patients with primary or recurrent RP DDLS who underwent surgical resections from September 2005 to September 2016 at Fudan University Shanghai Cancer Center were included in this study.

Multifocal disease was defined as having more than 1 distinct tumor nodules, as opposed to multiple DDLS contained within a solitary focus of WDLS [9]. Resection extent was classified into 2 groups, gross tumor resection (R0/R1) and palliative resection (R2 resection). Tumor burden was counted as the maximum diameter of tumor for unifocal disease or the sum of the maximum diameter of every single lesion for multifocal disease. Concomitant organ resections were only performed for directly involved adjacent organs or to facilitate expected gross tumor resections. Tumor grade was defined by the French Federation of Cancer Centers Sarcoma Group (FNCLCC) grading system [10]. The information of tumor burden, tumor grade, blood loss, concomitant organ resection, extent of resection, tumor integrity (intact vs piecemeal tumor resection) was determined by the operative report and/or pathology report. During the follow-up, patients who developed suspicious metastatic lesions were administered further imageological examinations such as contrast-enhanced CT, contrast-enhanced MR, ECT, or PET-CT. All available imagings of patients with metastatic disease were systematically reviewed in consensus by two experienced radiologists with expertise in cancer imagining. Pathological slides were independently confirmed by two experienced pathologists with expertise in soft tissue sarcomas.

SPSS 21.0 was applied for statistical analysis. Median overall survival (OS) and progression-free survival (PFS) were determined using the Kaplan-Meier method. Blood loss and tumor size were dichotomized for Kaplan-Meier analysis [11]. Log-rank test was applied to comparing survival between groups, and Cox proportional hazards regression modeling was used to perform multivariate analysis. Only the factors identified statistically significant in the univariate analysis were then put in multivariate analysis. All tests were two-sided with a significance level set at P < 0.05.

Overall survival of all patients (A); OS according to blood loss (B) 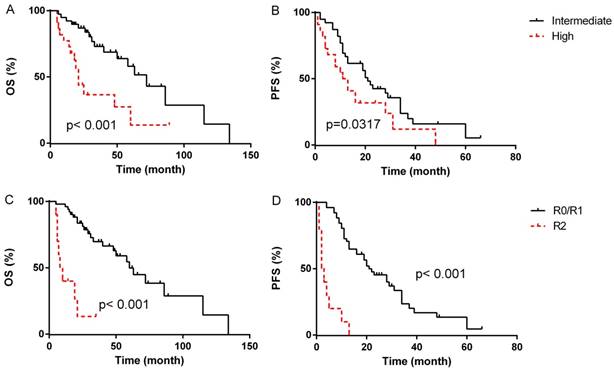 Survival outcome according to tumor integrity (A&B) and multifocality (C&D). 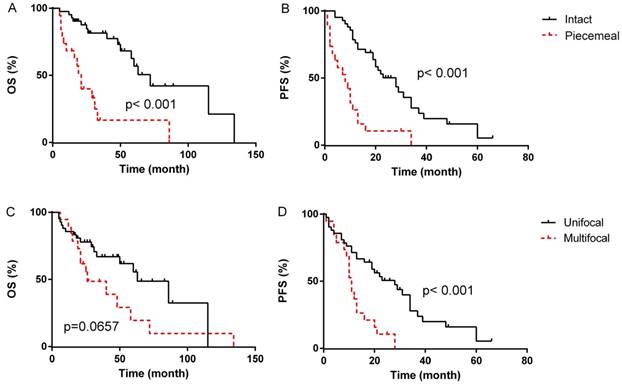 Liposarcoma is a rare disease prevailingly affecting adults. Accumulating evidence has demonstrated that the clinical outcomes can vary dramatically according to different histologic subtypes and different primary sites [4, 5, 12, 13]. Among all the histologic subtypes, DDLS is a high-grade tumor with the systemic metastatic rate of 5% to 29.7% [14-16]. There was no previous report focusing specifically on RP DDLS of Asian population. By retrospectively analyzing the data 61 RP DDLS patients from a single center, we sought to describe the clinical features of the disease, and further evaluated the prognostic factors influencing patients' outcome, thus to address this essential knowledge gap.

Because of the deep location and the lack of specific symptoms in early stage, RP LS presented frequently as considerable size by the time of diagnosis. In this cohort, the median size of RP DDLS was 19 cm (range 4.3-50 cm). Some studies have reported that larger tumor burden was related to worse prognosis [4, 12, 17], while some scholars including Keung EZ et al. showed no difference [5, 9]. In our study, we didn't detect any prognostic significance of tumor burden.

With regard to intraoperative blood loss, the median blood loss was 400ml (range, 50-2700 ml), and blood loss≥400 ml was proven as an independent negative predictor in our study (HR 3.302, 95%CI 1.231-8.858, p=0.018). However, Lehnert T et al. who retrospectively analyzed the data of 110 retroperitoneal STS patients reported that blood loss > 1500 ml independently predicted worse prognosis [11]. Apparently, the amount of bleeding was markedly smaller in our research. We assumed the main reasons might be (1) different disease entities (DDLS only vs. various kinds of STS) (2) ethnic difference (Chinese vs. European).

In terms of admission status, some literatures reported that recurrent tumor was negatively associated with OS or PFS [17, 19]. In the present study, however, we didn't observe any significant effect of the recurrent disease on PFS/OS. We assumed that the following reasons might explain this unexpected result. Firstly, our institution was a tertiary hospital, which meant that the illnesses our patients were generally more serious. The severity of the primary disease might contribute to the indiscrimination of patients' outcome between primary and recurrent group. The tumor burden (median 20 cm, range 7-50 cm) and blood loss (median 400 ml, range 50-2700 ml) of the primary disease group were bigger than that of the recurrent disease group (tumor burden: median 18 cm, range 4.3-33 cm; blood loss: median 300 ml, range 50-2500 ml). Secondly, our patients might be too small to discover the impact of recurrent disease on patients' outcome.

In this study, concomitant organ resections were only performed for directly involved adjacent organs at the time of surgery or to facilitate expected gross tumor resections. The most frequently included organ was kidney (n=21, 63.6%), which was identical with the study of Keung EZ et al. [9] (kidney, n=78, 65.5%). In this cohort, no significant effect of organ resection on PFS/OS was observed in this cohort. The result was in line with previous researches, including the studies of Keung EZ et al. and Ikoma N et al. [9, 20].

Owing to the inefficiency of adjuvant therapy, surgical complete resection remains the cornerstone for the treatment of LS. To the best of our knowledge, gross tumor resection is associated with favorable prognosis [5, 9, 12, 15]. In this cohort, patients with R2 resections presented obvious worse OS/PFS compared to patients with R1/R0 resections, and resection extent was proven an independent prognostic factor for OS (HR 4.616, 95%CI 1.267-16.818, p=0.020), which was in line with the study of Keung EZ et al. [9].

Due to the deep location, general large size, and proximity to vital structures of RP LS, sometimes it's inevitable to cut through the tumor to achieve gross tumor resection. Some scholars have reported that tumor rupture was associated with worse prognosis [9], an effect that was also observed in our research. In this cohort, both median OS and median PFS of intact resection group were significantly longer than that of piecemeal resection group. Moreover, multivariate analysis demonstrated that tumor integrity was an independent predictor for both OS (HR 4.043, 95%CI 1.518-10.768, p=0.005) and PFS (HR 3.057, 95%CI 1.320-7.080, p=0.009).

In terms of postoperative adjuvant therapy, the role of chemotherapy and radiotherapy remains a controversial issue in patients with LS. Generally, DDLS relatively chemo-insensitive compared with other histology subtypes of LS [23]. A recent DDLS specific study from MD Anderson Cancer Center reported a response rate of 24% to combination chemotherapy [24]. Doxorubicin-based regime remains the first-line chemotherapy to metastatic or unresectable disease, although response rates are low. Pre-operative radiation therapy is the preferred method of adjuvant radiation therapy for retroperitoneal LS [25-27]. In this cohort, however, we did not observe significant effect of the chemotherapy or radiotherapy on patients' OS or PFS.

RP DDLS was a rare disease of deep location, general large size, and frequent proximity to vital structures. R0/R1 resection remained the mainstay of treatment, and was an independent favorable prognostic factor of OS. Blood loss<400 ml also predicted better prognosis. Surgeons should endeavor to excise the tumor intactly since tumor integrity was an essential predictor for both OS and PFS. Tumor grade and multifocality independently predicted worse PFS. We hope our research may facilitate further prospective studies and clinical decision-making in RP DDLS patients.

Written informed consent was obtained from all patients. This study was approved by the ethics committee of Fudan University Shanghai Cancer Center. Each author certifies that all investigations were conducted in conformity with the ethical principles.

24. Livingston JA, Bugano D, Barbo A. et al. Role of chemotherapy in dedifferentiated liposarcoma of the retroperitoneum: defining the benefit and challenges of the standard. Sci Rep. 2017;7:11836