How much margin do we need for pelvic lymph nodes irradiation in the era of IGRT?

Background and purpose: Image guided radiotherapy (IGRT) without 6 degree of freedom couch can only correct the translational setup errors of pelvic radiotherapy. But errors introduced by rotation and deformation of CTV can't be adjusted in most of IGRT systems. This article is to evaluate these errors and to provide recommendations on the margin needed in the era of IGRT.

Material and methods: 218 patients who received pelvic radiotherapy in PUMC Hospital from 2012 to 2014 were included. A simulation CT and a CBCT were acquired for every patient. 3D and 6D registrations of CT and CBCT were applied. 9 bony landmarks were marked and distances of each landmark between CT and CBCT were measured in three directions.

Pelvic lymph nodes are commonly involved in many cancers [1-3], such as prostate cancer, rectum cancer, cervical cancer, endometrial cancer, and bladder cancer etc. For a great proportion of these cancers, pelvic lymph node radiation is the standard of care.

The margin between CTV and PTV consists of: the internal margin, which accounts for organ motion, and the setup margin, which accounts for patient setup and delivery errors. For lymph node CTV, the internal organ motion is minimal and the majority part of CTV-PTV margin is the setup margin. Image-guided radiotherapy (IGRT), with various types of pre-treatment image guidance, aims to reduce geometric uncertainty. However, in most of IGRT systems, only the translational motions could be corrected, while the rotational motions and CTV deformations (caused by deformations of organs) could not be corrected. Adaptive radiotherapy (ART) attempts to overcome the uncertainties caused by organ motion, by on-line or off-line replanning [7], but ART usually takes lots of time and is unsuitable for high throughput centers. The most practical strategy is still to add a CTV-PTV margin.

Clinical target volume of pelvic lymph nodes is usually defined as certain distances around blood vessels [8], and it is presumed that most of the pelvic vessels have a relatively stable position to the bony structures. Matching to bone is probably sufficient for pelvic lymph node CTVs as they are not thought to move to the pelvic side walls. But the bony pelvis is not totally rigid, which means it may have slight deformation between two delivery fractions, so a small CTV-PTV margin should be added to compensate for the deformation of bony pelvis.

In this study, we retrospectively enrolled 218 patients with various cancers who received pelvic radiotherapy at Peking Union Medical College Hospital between Aug. 2012 and May. 2014. 41 patients were male and 177 were female. Table 1 shows the diseases distribution.

All patients underwent simulation computer tomography (CT) scan in the supine position with thermoplastic trunk mask immobilization (Renfu Medical, Guangzhou, China). The CT scans were obtained from L4 vertebral body to 2 cm below the ischial tuberosities. Linear interpolation method [9] was used to enhance image resolution. The clinical target volume (CTV) for each patient was contoured and dose was prescribed by radiation oncologists according to guidelines of specific disease. Treatment plans were created with Eclipse treatment planning software.

Figure 1 and figure 2 show distributions of the nine landmarks. These landmarks were marked on both simulation CT and CBCT with carefully reviewed of images on axis, coronal and saggital planes.

To evaluate the reproducibility of our method of measurement, landmarks' locations of the first 10 patients were measured twice by the same investigator with one week interval for both CT and CBCT images.

Anatomical Positions of the nine bony landmarks. They were marked with red “+” and green arrows. The landmarks could be easily recognized in both CT and CBCT images. 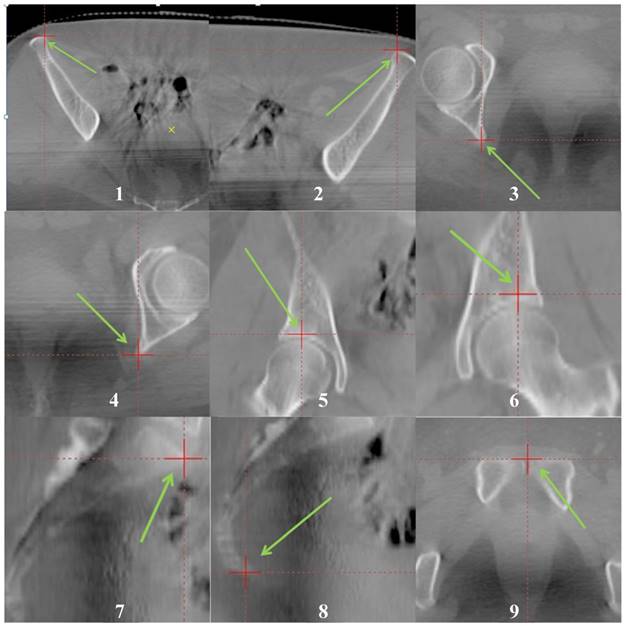 Mean value and standard deviation (SD) of each landmark errors for all patients were calculated.

So the formula “Mean + 1.96 SD” was used to estimate the 95% confidence interval for the CTV-PTV margins. Correlation analyses were applied between movements of landmarks.

3D distributions of the nine bony landmarks. The landmarks were roughly uniformly distributed in the pelvis. 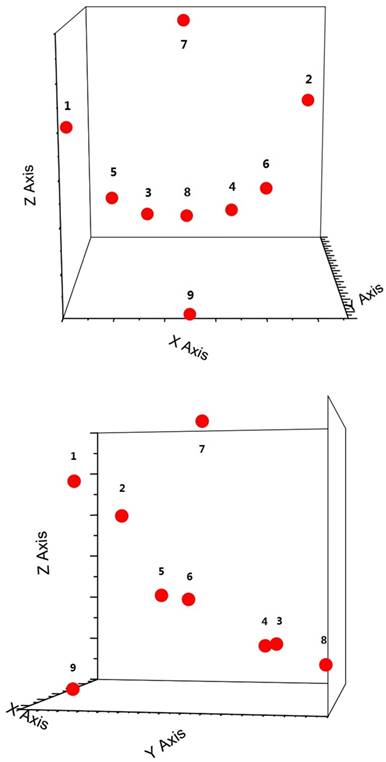 To evaluate reproducibility, landmarks' locations of 10 patients were measured twice with an interval of one week. The average location difference between two measurements were 0.1 ± 0.4 mm in LR and AP directions, and 0.1 ± 0.6 mm in SI direction for both CT and CBCT images.

Pelvic lymph node irradiation is the standard of care for many malignant tumors such as cervical cancer, prostate cancer and rectum cancer. The lymph node CTVs were usually defined by adding a certain margin from main blood vessels. It is presumed that the major pelvic vessels have a relatively stable position to the bony pelvis, so it is feasible to use bony landmarks as substitutes to measure the movements of pelvic lymph node CTV. 9 bony landmarks were selected due to easy recognition in CT and CBCT thus the observer errors could be minimized. The pretest results showed that our repeat error would be about 1 mm. These landmarks were widely and roughly uniformly distributed all over the pelvis, so movements of landmarks could represent the movement of different parts of pelvis and thus the different part of CTV. Please note that this paper focuses on only the lymph node CTV, motions of organs such as rectum, bladder and small bowels are beyond the scope of this study.

Histograms of the average movements of 9 landmarks for all 218 patients along the LR, AP and SI axes. 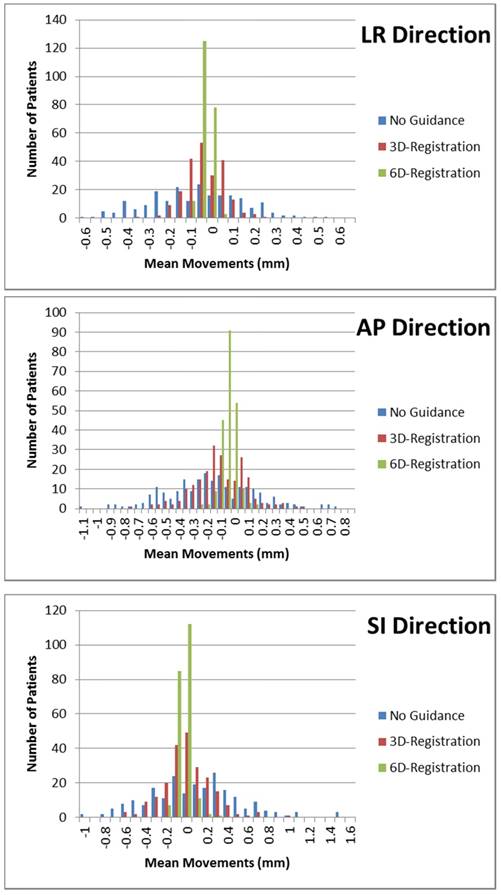 A CTV-PTV margin is needed to compensate for the setup errors. In our study, with IGRT, the average movement is less than 1.5 mm in each direction. However, standard deviations of landmarks' movements were relatively large, which were 2.3 - 2.8 mm in LR direction, 3.6 - 4.1 mm in AP direction and 4.6 - 5.5 mm in SI direction. And we suggest margins of 6 mm, 9 mm and 12 mm for LR, AP and SI directions. The margin for SI direction was larger compared with LR direction. We speculated it might be due to the HipFix baseplate and thermoplastic trunk mask immobilization system which was cylinder-shaped and seemed not as good fixation in SI direction as in other directions.

IGRT is useful to minimize setup errors in each treatment delivery fraction, but it is impossible to completely eliminate the errors. In most of IGRT systems, only translational setup errors could be corrected. Pastore et al. [11] found that correcting rotational errors by couch translations can lead to dosimetric uncertainties in the dose to organs at risk. We evaluated the residue errors by measuring the landmarks' movement after 3D-registrations were preformed. Movements of landmarks (residue errors) were reduced with the standard deviations among 1.2 - 1.9 mm, 2.4 - 3.2 mm and 2.8 - 3.9 mm in LR, AP and SI directions respectively. And we suggest margins of 3 mm, 6.5 mm and 7 mm in each direction for the use of daily IGRT with 3D treatment couch.

The residue errors might be due to rotations and deformations of CTV. Rotational setup errors didn't cause much trouble when the target was small. But for pelvic radiotherapy, CTV could be as large as 20 cm in diameter, and then a 1 degree of rotation around the isocenter could cause 1.7 mm movement at the edge of CTV. Ahmad et al. [12] showed significant rotational setup variations of the pelvis around the pitch axis. 6D treatment couch can be rotated around three orthogonal axes, which are yaw, pitch, and roll rotations, so the rotational setup errors could also be corrected and less residue errors were expected with 6D treatment couch. Our results support the hypothesis. Standard deviations of landmarks' movements were further narrowed to 0.4 - 0.6 mm in LR direction, 0.9 - 1.1 mm in AP direction and 0.8 - 1.3 mm in SI direction with 6D treatment couch. These movements were small and comparable with the measurement accuracy of our study and machine accuracy of IGRT system. In consideration of the measurement and machine accuracy, we suggest margins of 2 mm, 3 mm and 3 mm in each direction for the use of daily IGRT with 6D treatment couch.

Residue errors after 6D-registration might due to deformations of CTV. Pelvic bones were relatively rigid so the deformable errors were quite small compared with CTV. It might be different for CTVs outside the pelvis, for example, flexibility of cervical vertebra may cause more deformable setup errors for head and neck CTVs [13, 14]. Those errors were difficult to correct. Adaptive radiotherapy (ART) might be a solution and further validation of ART is required.

In our center, patients were treated in supine position and fixed with HipFix baseplate and thermoplastic trunk mask immobilization system. Although prone position has been shown to reduce small bowel within the treatment field [15,16], it is also associated with considerable set-up errors (up to 15 mm) caused by pitch sacral rotations (-14°to 11.5°) [17]. Siddiqui et al. [18] analyzed prone and supine patient setup errors. Systematic setup errors in prone setup were larger than in supine setup. It probably negates the benefits of small bowel sparing by increasing PTV margins to account for these errors, and Ahmad et al. [19] found 6D treatment couch might solve this problem. Further studies need be done for different patient positions and immobilizations.

In this study, each patient only had one CBCT scan, because we were not sure how much margin could be reduced with IGRT and the concern of extra radiation due to daily CBCT. Further prospective studies are on-going for small CTV-PTV margins with multiple CBCT scans in our center.