Accumulating studies confirmed that luteolin, a common dietary flavonoid which is widely distributed in plants and has diverse beneficial biological function, including anti-oxidant, anti-inflammation and anticancer properties. However, the detail mechanisms of luteolin on GC are poorly understood. Here, we investigated the anticancer effect of luteolin in GC cells in vitro and in vivo. Luteolin reduced the cell viability in a time and dose-dependent manner. Luteolin significantly inhibited cell cycle progress, colony formation, proliferation, migration, invasion and promoted apoptosis in vitro and in vivo. Luteolin also regulated these biological effects associated regulators. Mechanically, luteolin treatment regulated Notch1, PI3K, AKT, mTOR, ERK, STAT3 and P38 signaling pathways and modulated a series of miRNAs expression. These findings provide novel insight into the molecular function of luteolin which suggest its potential as a therapeutic agent for human GC.

Gastric cancer (GC) is one of the most common gastrointestinal malignancies and the leading cause of cancer-related mortality worldwide, especially in China [1-3]. Despite the development of endoscopy examination significantly increased the rate of earlier diagnosis of GC and timely surgical resection gives a favorable outcome, the long-term survival is still not satisfactory due to the high rate of metastasis, recurrence drug-resistance and no effective approaches to reverse advanced GC [4-6]. Therefore, it's necessary to develop novel therapeutic reagents to treat GC. Numerus studies reported that the long-term consumption of food in fruits and vegetables reduces the risk of cancer [7, 8]. Thus, exploiting natural phytochemicals for developing anticancer agents which are more effective and less toxic remains an important priority.

In this study, we evaluated the function of luteolin in regulating gastric cancer cell proliferation, migration and invasion. Moreover, we investigated luteolin intervention modulated multiple signaling pathways and miRNAs expression and illustrated the underlying mechanism.

IHC assay was carried out on the 4μm-thick formalin-fixed, paraffin-embedded section according to the protocol. The primary antibodies used in IHC staining were from Abcam (MA, USA). After incubated with the second antibodies, the slides were stained with diaminobenzidine for 3-10 min at room temperature and then observed by a light microscope.

Total RNA of GC cells was extracted using TRIzol reagent according to the manufacturer's protocol. 1 µg of total RNA was used to synthesize cDNA with the help of the PrimeScript RT reagent kit in reverse transcription reactions. qPCR was carried out on an ABI 7300 System using FastStart Universal SYBR Green Master with the primers. qPCR primers were ordered from Genecopoeia (Guangzhou, China). All experiments were repeated in triplicate.

Cells and tissues were lysed on ice in RIPA lysis buffer according to manufacturer-provided instructions. The protein concentration was quantified with the BCA reagent (Rockford, IL, USA). Equal amounts of protein were divided to electrophoresis in SDS-PAGE gel and then transferred to a nitrocellulose membrane (Millipore, MA, USA). After blocking with 5 % non-fat milk for 1 h, the membranes were incubated with antibodies respectively overnight at 4°C, after washed 3 times with TBS/0.1% Tween 20, blots were incubated with HRP-conjugated secondary antibodies. Protein bands were visualized using an enhanced chemiluminescence kit (Amersham, Little Chalfont, UK).

Briefly speaking, 5.0×104 of GC cells were planted in basal medium without fetal bovine serum (FBS) in the upper chamber of Transwell chamber un-coated for migration assay or coated for invasion assay with 70μL Matrigel, while the lower chamber was filled with RPMI1640 medium with 20% FBS. After 24 hours, GC cells traversed the filters were fixed with paraformaldehyde, stained with crystal violet after non-invasive cells were scrubbed off the upper surface of chamber. The traversed GC cells was photographed and counted under a microscopy.

All protocols involved in this experiment were approved by the Institutional Animal Care and Use Committee of Shaanxi Provincial People's Hospital of Xi'an Jiaotong University (Xi'an, China). Briefly, 4-6-week old nude mice were randomly divided into two groups equally. 1 × 107 MKN45 or BGC823 cells were resuspended in 100 μl PBS and injected subcutaneously into the lateral flanks of each nude mouse. GC xenografts were examined by calipers weakly and the volume of xenografts was calculated using the following equation: Volume = A × B2 × 0.25 (A, length; B, width). Two weeks after injection, the animals were treated with PBS or luteolin (20 mg/Kg). After 2 weeks, all mice were sacrificed and the xenograft specimens were harvested.

All data were presented as means ± SD and assessed by Student's t-tests or Mann-Whitney U test for comparison between groups. Statistical analysis was performed using GraphPad Prism 6 or SPSS 18.0. P values less than 0.05 were considered statistically significant. 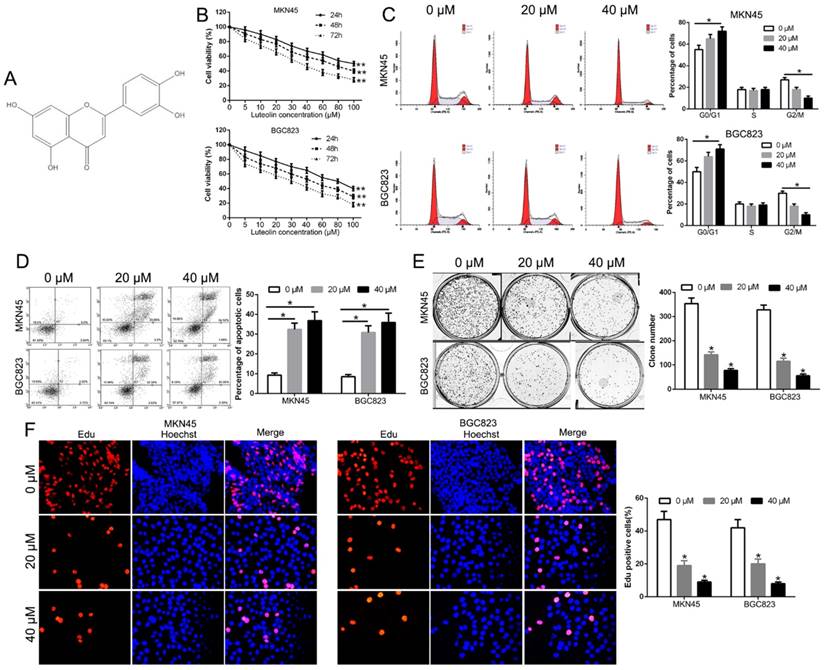 Effect of luteolin on tumor growth and metastasis in vivo. (A, B) Representative images of MKN45 and BGC823 xenograft treated with PBS or luteolin and tumor volumes were measured. (C) Average weights of xenograft tumors in nude mice. (D) Ki67 and (E) TUNEL staining of xenograft tumors. *P<0.05, **P<0.01.

Luteolin suppressed GC cell migration and invasion in vitro and in vivo. Transwell un-coated (A) and coated- (B) Matrigel to measure the effects of luteolin on GC cells migration and invasion. (C) IVIS images show representative mice for PBS treated or Luteolin treated mice. (D) Lung colonization was analyzed by H&E staining. *P<0.05.

Luteolin suppressed the activation of multiple signaling pathways in GC

To confirm the signaling pathway by which luteolin exerted its anticancer effects, we evaluated by western blot to measure diverse signaling pathways. The data showed that luteolin treatment reduced Notch1, p-PI3K, p-AKT, p-mTOR, p-ERK, p-STAT3 and increased p-P38 signaling (Fig. 5). These data suggest that these signaling pathways were all involved in luteolin-induced biological effects on GC cells.

Despite surgery resection and chemotherapy advancement in GC therapy, the long-term prognosis of advanced GC patients remains poor due to hepatic or distant lymph node metastasis and recurrence [30]. Recently, the chemical compound of natural extracts from plants has been reported to act as potential therapeutic agent for gastric cancer [31]. Luteolin, a novel dietary flavonoid from plants and foods, has been reported to inhibit the development and progression in different tumors [32]. Luteolin modulates cell cycle arrest and apoptosis in human colon cancer cells and xenografts. Luteolin reduces migration of human glioblastoma cell lines via inhibition of the p-IGF/PI3K/AKT/ mTOR signaling pathway [21]. Luteolin exerts an anticancer effect on NCI-H460 human non-small cell lung cancer cells through the induction of Sirt1-mediated apoptosis [32]. Therefore, we attempted to elucidate the biological effects and the underlying mechanisms of luteolin on GC.

In present study, we firstly confirmed that luteolin inhibited cell viability was time- and dose-dependent in GC cells. These results were consistent with previous studies in other cancers. Our results further demonstrated that luteolin suppressed cell cycle arrest, colony formation, proliferation and promoted apoptosis in GC cells in vitro and in vivo. These biological effects of luteolin on GC cells were mediated by regulating Cyclin D1, Cyclin E, p21, Bcl2 and Bax. These molecules were cycle and apoptosis-associated regulators. Moreover, most of cancer deaths are caused by metastasis. The metastasis of cancer is a complex processed that contains invasion and migration to the circulatory system. Our study evaluated the potential of luteolin effect on metastasis. We demonstrated that luteolin inhibited migration and invasion in vitro and suppressed the lung metastasis in vivo. Luteolin regulated metastasis through regulating MMPs expression and EMT process. Progress of invasion involves proteolytic degradation of the extracellular matrix by MMPs. Increasing studies indicated EMT, an evolutionarily conserved process in which cells undergo conversion of epithelial cells to mesenchymal cells, is recognized as the initiation of metastasis [33]. Our data suggest that luteolin regulated GC cell migration and invasion by MMPs and EMT. Moreover, to explore the molecular mechanisms of luteolin, we confirmed that luteolin regulated Notch1, PI3K, AKT, mTOR, ERK, STAT3 and P38 signaling pathway, which play a critical role in development and progression of GC. In addition, we confirmed that luteolin regulated a panel of miRNAs expression, which contribute to the biological function of GC. These findings provide the first validated evidence suggesting that luteolin may be a novel and effective anticancer agent.

In conclusion, our results indicated that luteolin inhibited cell viability, induced cell cycle arrest, colony formation, proliferation, migration, invasion and promoted apoptosis in vitro and in vivo. We also illustrated that luteolin regulated multiple signaling pathways and miRNAs in GC cells. Our results promote further research into the use of luteolin in GC treatment.