Clinic-pathologic Features and Prognostic Analysis of Thyroid Cancer in the Older Adult: A SEER Based Study

Purpose: Age at diagnosis has been identified as a major determinant of thyroid cancer-specific survival. But the cut-off value for age was controversial. The interaction among gender, age and histologic subtypes needed to be answered.

Conclusions: In conclusion, there were a series of factors contributing to the poor prognosis in elderly patients including clinic-pathologic factors and therapy selection. There was no survival difference for elderly patients to receive lobectomy and total thyroidectomy.

Thyroid cancer (TC) is the most common endocrine malignancy, with an estimated 56,870 new cases in the United States in 2017 [1]. The long-term prognosis for TC patients is generally excellent with appropriate treatment [2]. The mainstay treatment for TC patients is still surgical resection, with or without adjuvant radioactive iodine therapy. Histologic subtype has been proved to be prognostic factor [3, 4]. Papillary thyroid cancer accounts for more than 90% of all cases and has good prognostic [5, 6]. Thyroid cancer are reported to be female predominant while male patients have more aggressive behaviors and worse prognosis compared with female [7].

Age at diagnosis has been identified as a major determinant of thyroid cancer-specific survival [8]. Patients older than 45 years of age are generally considered to have poor prognosis [5, 9, 10]. With advancing age, a higher-risk histological phenotype is more likely [11]. Older age at diagnosis was independent risk factors of disease-specific mortality of TC patients [12]. How to define older patients remains a question. Most studies used 45-year old as a cutoff value [9, 10, 12]. However, patients around 45-year old cannot be recognized as elderly. Some other studies used 65 years [13] or 60 years[14]. Little is known about the clinic-pathologic and prognostic factors in elder patients. Interaction between gender and histologic subtypes in elderly patients needs further study.

In this study, we will use the Surveillance, Epidemiology, and End Results (SEER) database to analyze the effect of age on prognosis and the clinic-pathologic features of elderly patients.

Among subjects in the dataset, those eligible to our study were thyroid cancer (TC) patients who met the following criteria: 1) were diagnosed with TC from 2004 to 2013, 2) were aged 20 years or older at the time of diagnosis, 3) had TC as their only known malignancy throughout this period. Cases that were diagnosed clinically only, via autopsy only, or via radiography without microscopic confirmation were excluded from our study cohort. Based on these criteria, our study cohort consisted of a total of 59,892 TC patients.

The patients' demographic and tumor characteristics were summarized with descriptive statistics. Comparisons of categorical variables among different groups of patients were performed using the Chi square test, and continuous variables were compared using Student's t test. The primary endpoint of this study was cause specific-survival (CSS), which was calculated from the date of diagnosis to the date of cancer specific death. Deaths attributed to pancreatic cancer were treated as events and deaths from other causes were considered as censored observations. Survival function estimation and comparison among different variables were performed using Kaplan-Meier estimates and the log-rank test. The multivariate Cox proportional hazard model was used to evaluate the hazard ratio (HR) and the 95 % confidence interval (CI) for all the known prognostic factors. We used log-rank test to analyze the potential relating factors to no microscopic confirmation. All of statistical analyses were performed using the Intercooled Stata 13.0 (Stata Corporation, College Station, TX). Statistical significance was set at two-sided P < 0.05.

This study was deemed exempt from institutional review board approval by The First Affiliated Hospital, China Medical University; informed consent was waived.

Comparison of clinic-pathological characteristics among the young, middle-aged, and elderly thyroid cancer patients

To better understand the difference between male and female in the elderly patients, we compared the clinic-pathologic characteristics between females and males, which was summarized in Table 2. More male patients were married and Caucasian. Male patients had higher percentage of undifferentiated tumor. Female patients had smaller tumor size and earlier TNM stage than male patients.

The survival difference among different ages. 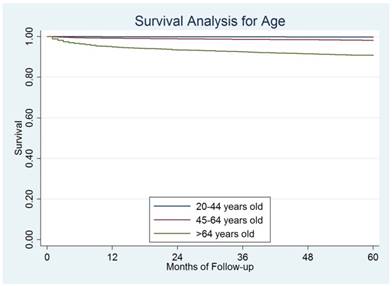 Comparison of clinic-pathological characteristics between female and male elderly thyroid cancer patients from the SEER database.

Variables showing a trend for association with survival (P < 0.05) were included in the Cox proportional hazards regression model. Gender, marital status, histology, tumor grade, tumor size, TNM stage, surgery and radiotherapy were all independent prognostic factors in the multivariable analysis (Table 3). There was no survival difference for elderly patients to receive lobectomy and total thyroidectomy, P=0.852. Compared for female patients, the hazard ratio for male patients was 1.77, P<0.001.

Thyroid cancer has been established to have an obvious female predominance [7, 15]. In our present study, we also found that female/male ratio was larger than 1 in all the age groups, especially in the young patients. The underlying mechanism for female predominance in TC was still unknown. Some studies showed that estrogens may play a role in favoring the malignant progression of thyroid tissue to cancer [15, 16]. Our study further found that there was a steady decreasing in the proportion of female in the TC patients as the age increasing. For the elderly patients, the female/male ratio was only 2.46. This finding supported the theory that sex hormone was important in gender imbalance of TC patients.

Age at diagnosis has long been identified as an established prognostic factor for TC patients [8, 17]. The cutoff value for age to predict prognosis has been controversial [9-14]. In our present study, we applied two most common used cut-off value: 45 years and 65 years old to divide patients into 3 groups: 20-44 years, 45-64 years, and ≥ 65 years. We found that patients older than 65 years old (elderly patients) had significantly worse prognosis than the other two groups. To better understand the potential reasons for the survival difference among ages. We compared the clinic-pathologic features among these three groups of patients and found that elderly patients had higher proportion of male gender, advanced tumor grade, follicular subtype and advanced tumor stage (Summary Stage and AJCC 6th Stage). These factors were all proved to be independent risk factors for prognosis in both univariate analysis and multivariable analysis which were consistent with previous reports [14, 17]. Shah S et al. found that there was a significantly larger percentage of excellent responders among young patients (age <55) than among old patients (age ≥ 55) [8]. Some other studies showed that age was a strong, continuous, and independent mortality risk factor in patients with BRAF V600E mutation but not in patients with wild-type BRAF [13, 17].

We found that male patients with TC had worse prognosis than their female counterparts, which was consistent with previous studies [7, 19, 20]. Our further analysis showed that tumor sizes of our male patients were larger than that of female patients. There were more patients of advanced TNM stage and histologic subtypes in male patients, suggested the more aggressive behaviours in male patients with TC. Furthermore, we analysed the survival disparity between female and male according to the histologic subtype and we found that significant survival difference was observed between genders in differentiated tumor while not in undifferentiated tumor. More and more studies showed that undifferentiated TC possessed heterogeneous and unique profiles and there was a need to reveal the significance of detailed molecular profiling of this disease [21, 22].

We would like to thank those who have been involved with the Surveillance, Epidemiology, and End Results (SEER) Program, including the staff members of the National Cancer Institute, and the Information Management Services, Inc.

Dr. Haiyan Zhang is an Irma and Paul Milstein Program for Senior Health fellow supported by the MMAAP Foundation (http://www.mmaapf.org)

8. Shah S, Boucai L. Effect of Age on Response to Therapy and Mortality in Patients with Thyroid Cancer at High-Risk of Recurrence. The Journal of clinical endocrinology and metabolism. 2017