To evaluate the clinical outcomes of simultaneous dose reduction of elective nodal area with intensity-modulated radiotherapy (SIR-IMRT) versus conventional IMRT (C-IMRT) in patients with limited-stage small-cell lung cancer (LS-SCLC), patients with LS-SCLC who received definitive SIR-IMRT or C-IMRT were retrospectively analyzed. In SIR-IMRT group, the prescribed dose was 60Gy to the planning gross target volume (PTVG), and 54Gy to the planning target volume (PTV). In the C-IMRT group, the prescribed dose was 60Gy to the whole PTV. Radiation-related toxicities were estimated according to Common Terminology Criteria for Adverse Events (version 3.0). The primary endpoint was loco-regional recurrence-free survival (LRFS), and the secondary endpoints include overall survival (OS) and toxicities. LRFS and OS were estimated with Kaplan-Meier method. After propensity score matching, 84 patients were included in this study, with 42 patients in each group. Fifty-eight patients experienced treatment failure. Grade 3 and above radiation-induced lung toxicity developed in 2 patients in SIR-IMRT group and 5 patients in C-IMRT group, respectively. Grade 3 and above radiation-related esophagitis was observed in 3 patients and 5 patients, respectively. The 1-, 3-year LRFS rates of the SIR-IMRT group and C-IMRT group were 90.4%, 73.3% and 87.1%, 45.0%(P=0.025), respectively. Reducing the irradiation dose to the elective nodal region may reduce radiation-induced toxicities without compromising local-regional control and overall survival.

Combining chemotherapy and thoracic radiotherapy (RT) has been shown to improve patient survival1,2 as the standard treatment for limited-stage small cell lung cancer (LS-SCLC). However, maintenance of local control is not reliably achieved for patients with SCLC 3, so we need to find a better way to improve the local control without increasing radiation-induced toxicities. In the past several decades, increasing the strength of treatment, including radiation dose and patterns of radiation have been varied to optimize treatment to improve local control rate and prolong the survival period4 5-7. However, the results of a Radiation Therapy Oncology Group (RTOG)-0617 study of non-small cell lung cancer (NSCLC) were disappointing; the survival time of patients receiving 74Gy irradiation was less than 60Gy group. The reason may be associated with an increased treatment-related death in the high dose groups8. Thus, research is ongoing to optimize radiation delivery to tumors while sparing surrounding normal structures. The dose for controlling subclinical lesions compared with gross target volume is lower , and it is reported that the dosage of 50Gy can effectively control the subclinical lesions 9.We were interested in simultaneous integrated dosed reduction to elective nodal area with intensity - modulated radiotherapy (SIR-IMRT). In this paper, patients with LS-SCLC accepting SIR-IMRT treatment or conventional IMRT (C-IMRT) treatment were retrospectively analyzed to evaluate the clinical effect of the two treatments.

Patients Patients with LS-SCLC underwent radical SIB-IMRT and C-IMRT from Jan. 2010 to Dec. 2013 at our hospital were collected, including 72 patients in SIR-IMRT group and 65 patients in C-IMRT group. Propensity score matching (PSM) was performed based on the factors including gender, age, stage of disease, and chemotherapy, and after matching, a total of 84 patients were included in this study, with 42 patients in each group. The pathologic diagnoses of SCLC of all the patients were confirmed by two senior pathologists. The median age was 58 years old (range,38-74). Sixty-one patients were males and 23 were females, the ratio was 2.65:1. Panofsky Performance Status (KPS) score of all patients were no less than 70. All patients received Serologic examinations including blood routine and hepatic and renal function tests, chest computed tomography (CT), neck and abdomen ultrasound, brain magnetic resonance imaging (MRI), and bone scan imaging before radiotherapy. Clinical stage was conducted by the imaging examination according to the current American Joint Committee on Cancer (AJCC) criteria for NSCLC. The general information of patients was shown in Table 1.

Therapy All Patients underwent positioning scan by large-aperture spiral CT simulator. The slice thickness was 5mm. The gross tumor volume (GTV) was defined as any visible primary tumor and lymph nodes on CT simulation. All lymph nodes were conducted as positive lesions if they met one or more of the following conditions: with a short diameter≥10mm, central necrosis, inhomogeneous enhancement, and a plurality of nodes integration. The planning gross tumor volume (PTVG) was established uniformly by including a 5mm margin around the GTV only in SIR-IMRT group. Clinical target volume (CTV) was defined as the high-risk lymph nodal regions, including adjacent regions of involved lymph nodes and the ipsilateral hila and the GTV with a 5mm margin. The 5mm-10mm expansion to CTV was defined as the planning target volume (PTV). In SIR-IMRT group, the prescribed radiation dose was 60Gy to PTVG with a division of 2.0Gy/day and 54Gy to the PTV with a division of 1.8Gy/day, 5 fractions per week. In C-IMRT group, the prescribed radiation dose for PTV was 60Gy, 2.0Gy/day. The dose deliveries were ≥ 95% for all the target volumes. Each treatment plan consisted of five static fields with the following normal tissue constraints: 1) total lung, Vlung5 (i.e., the percentage of lung volume receiving ≥ 5Gy) ≤ 60% and Vlung20 ≤ 35%; 2) Vlung40 ≤ 30%; 3) Vesophagus50 ≤ 50%, Vesophagus maximum ≤ 60Gy; and 4) Vspinal cord maximum ≤ 45Gy. The relation of dose and volume of the target volume and OAR was evaluated by the dose volume histogram (DVH). For patients who achieved a complete response (CR) after thoracic radiotherapy, prophylactic cranial irradiation (PCI) was recommended, with a dose of 25Gy administered over 10 fractions.

The presentation of the patient receiving treatment (n = 84)

Follow up All patients were followed up to December 31, 2015 from the completion of the radiation treatment. The median follow-up period was 40.2 months. Patients were followed up at the 1st and 3rd month after radiotherapy, then, once every three months for 2 years, and once every six months thereafter. Examinations included neck and abdomen ultrasound, chest CT scan, cranial CT or MR and bone scan if necessary.

Response and Toxicity The radiation-related toxicities of the lung and esophageal were evaluated by two senior radiation therapists according to the Common Terminology Criteria for Adverse Events (CTCAE) Version 3.0. The response was conducted 3 months after the radiotherapy based on new guidelines designed to evaluate treatment response by solid tumors. The response was divided into complete response (CR), partial response (PR), stable disease (SD) and progress disease (PD) 10. Loco-regional recurrence (LRR) was divided into local recurrence and regional recurrence: The local recurrence was defined as recurrence within the 95% isodose curve of GTV(PTVG). The regional recurrence field was defined as out of the 95% isodose curve of GTV target area, but still confined to the lung, pulmonary, mediastinal and supraclavicular regions without distant metastasis.

Normal tissue dosimetry parameters All of patients completed thoracic radiotherapy. It can be illustrated that the delivered dose of OARs in SIR-IMRT group were lower than the OARs in the C-IMRT group, but there was no statistically significance. The dose parameters of the OARs of the two groups were shown in Table 3.

The dose volume parameter of organ at risk (OAR) (n=84) 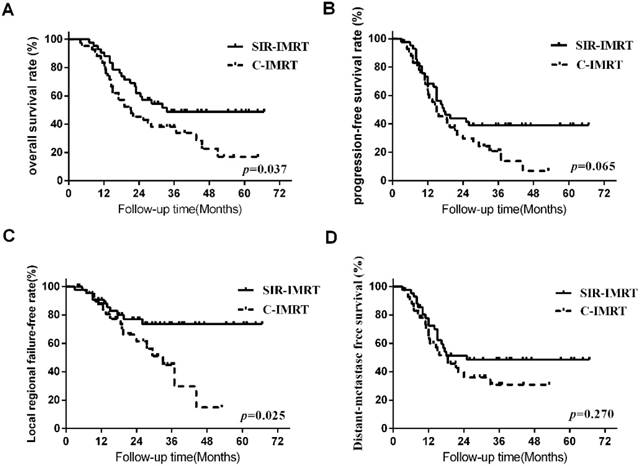 Patterns of failure for recurrence (n=84)

In this study, two- year OS and PFS rates were 62.0% and 44.0% in SIR-IMRT group, while 45.2% and 29.7% in C-IMRT group, respectively. A phase II study (RTOG0239) 13 investigated the efficacy and feasibility of accelerated radiotherapy involving a total dose of 61.2Gy concurrent with chemotherapy for SCLC. The median OS and PFS were 19.0 months and 9.9 months, respectively. The 2- year OS rate PFS rate was 36.6% and 19.7%, the results were disappointed. However, this study achieved better OS and PFS than the RTOG0239 study, even with lower prescribed radiation dose. In Shirvani, et al's study14, the median dose of PTV was 45Gy/30f (40.5Gy/27f-63.8Gy/35f) with PET-CT guided IMRT in LS-SCLC, 2- year OS and PFS rate was 58% and 43%, which were approximate to our results. The results of the CONVERT trials with the purpose to compare the differences hypo radiotherapy (45Gy, 1.5Gy/f bid) to conventional radiotherapy (66Gy, 2Gy/f qd) were reported on ASCO in 2016. The median follow-up time was 45 months, 2- years survival rate was 56% and 51% and the median survival was 30 months and 25 months15 , respectively. We can find that in the above studies, although the PTV was given a higher dose, OS and PFS were not proved to be better. Our study showed that in SIR-IMRT, the reduction of the dose for CTV didn't reduce the OS and PFS.

The results about toxicity reported in the present study were also encouraging. The rate of grade 3 esophagitis was 7.1% and 11.9% in SIB-IMRT group and in C-IMRT, respectively. While the rate of TRP of grade 3 or greater was 4.8% and 11.9%, respectively. A recent report showed that the incidences of radiation related esophagitis and TRP (grade 3) were between 18-23% and 7-11% 13,14 in non-small cell lung cancer or SCLC treated with IMRT, respectively. In this study, the toxicities of OARs in SIB-IMRT group were significantly lower than that of C-IMRT group and previously published dates, especially lung toxicity. The use of the SIR-IMRT technique also resulted in the application of a dose gradient to the PTVG and PTV. It had the benefit of guarantee for the treatment dose of tumor and meanwhile the protection for proximal normal organs especially for lung V20. Correspondingly, in a recent meta-analysis, symptomatic pneumonitis increased by 3% when lung V20 increased by 1%16. The lung V20 of two groups in this study were 27.52±2.57 and 28.57±3.43 (%), respectively, it might be associated with high incidence of TRP above grade-3 in C-IMRT group.

The results of this study concluded that compared to C-IMRT group, reducing the dose of the CTV didn't increase the rate of the local recurrence in SIB-IMRT group, but reduced the toxicity of the OARs. The survival results of the two groups showed that local recurrence mostly located in GTV. Therefore, we believe that SIB-IMRT therapy is safe and feasible for LS-SCLC. We will carry out further research on the recurrence of the GTV, in hope of better LRFS and OS by increasing GTV dose, while reducing the prophylactic irradiation to CTV and the radiation dose of the OARs.

There are several limitations in this study: this is a retrospective research, so selection bias might result underestimates of tumor recurrence and death rate, although we had balanced the dates of the two groups by propensity score matching. The encouraging results of this study indicated that SIR-IMRT reduced toxicity of OARs without reducing LRFS, OS and PFS for patients with LS-SCLC compared to C-IMRT, and also provided an intriguing justification for future. According to the results of this study, our next work is to research on reducing the irradiation dose to the elective nodal region and increasing the PTVG dose for LS-SCLC.