The Effect of Marital Status on Nasopharyngeal Carcinoma Survival: A Surveillance, Epidemiology and End Results Study

Conclusions: Being widowed was associated with an increased the risk of cancer mortality in NPC compared with being married, divorced, or single.

Nasopharyngeal carcinoma (NPC) is a rare malignancy in most countries around the world, including the United States (US), with an incidence of <1 case per 100 000 person-years (1). However, NPC is epidemic in Asian countries, especially in southern China, with an incidence of nearly 20-50/100 000 person-years (1,2). The Chinese population has become one of the fastest-growing immigrant populations in the US in recent decades, and Chinese people continue to be the population most affected by NPC, accounting for 42.7% of NPC patients in the US (3).

Radiotherapy and chemotherapy are the main treatments for NPC. However, pretreatment nutritional status, serious side effects including weight loss and acute oral mucosa during radiotherapy and chemotherapy, and radiation-related sequelae, which may negatively affect patient survival and quality of life (4-7). Social support is an important component of patient screening, treatment, and follow-up care. It has been suggested that having a spouse encourages early screening and compliance with treatment, improving outcome. Therefore, social situation is important to patients with and survivors of NPC. The available evidence suggests that married patients with cancer tend to be diagnosed at an earlier stage and are more likely to receive recommended or aggressive therapy (8,9). If social support is the primary beneficial effect of marriage, the protective effects of marriage may be particularly important for survival in NPC.

Marital status has been found to be related to survival outcome in various cancers (8-15). A recent population-based study identified the 10 leading causes of cancer death, including head and neck cancer, and the results also indicated that unmarried patients (i.e. those separated, divorced, widowed, or never married) tended to be diagnosed with advanced disease and to be undertreated, and had a higher risk of early cancer-related death than their married counterparts (9). One Surveillance, Epidemiology and End Results (SEER) study of head and neck cancer found that marriage had a protective effect on survival of oral and laryngeal cancer but not oropharyngeal, hypopharyngeal, or nasopharyngeal cancers. However, the study only classified patients as married or unmarried (16). A SEER-Medicare study found that marriage was associated with better outcomes in oral cavity and pharyngeal cancers. However, in this study only 12.4% of the patients had NPC, and they were not further classified by type of unmarried status (such as never married, separated, divorced, or widowed) (15). Previous research, including several studies investigating thyroid, ovarian, uterine, and gastric cancers (12,13,17,18), has found that widowed patients are at greater risk of cancer mortality. However, to date, limited studies have specifically focused on the association between marital status and NPC outcomes (19). In this study, we investigated the role of marital status in NPC survival using a SEER-based population.

We identified NPC patients from the SEER program, which is maintained by the National Cancer Institute and represents approximately 28% of the US population (20). SEER registries provide accurate, timely, and continuous data on cancer incidence, patient demographics, and survival. Patients diagnosed with primary NPC between 2004 and 2013 were included. Patients with insufficient or unknown demographics, clinicopathologic, and treatment parameters were excluded.

Patient demographics, clinicopathologic, and treatment characteristics were compared according to marital status. Frequencies were compared using the Chi-square exact test. Survival rate was expressed by Kaplan-Meier curve, and the survival differences were compared using the log-rank test. We calculated hazard ratios (HRs) and their 95% confidence intervals (CIs) using the univariate and multivariate Cox proportional hazards regression models to assess survival differences between marital status categories. The variables with significant differences in the univariate analysis were entered in to multivariate regression models. All analyses were conducted using SPSS version 21 statistical software (IBM Corporation, Armonk, USA). A p-value <0.05 was considered statistically significant.

The baseline demographics, clinicopathologic, and treatment characteristics of 3018 nasopharyngeal carcinoma patients according to marital status. 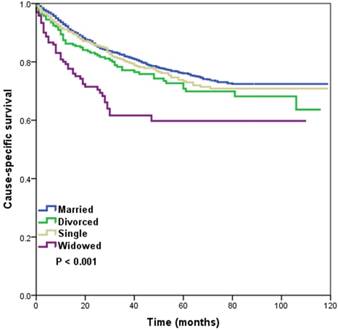 Univariate and multivariate analysis for evaluating the effect of marital status on nasopharyngeal carcinoma-specific survival.

Three multivariate Cox regression models were used to assess the individual interaction effects of marital status with gender, T-stage, and N-stage. Each model was adjusted for gender, race/ethnicity, grade, M-stage, radiotherapy, chemotherapy, and two of the three variables. Widowed patients remained at a higher risk of poor CSS compared with the non-widowed groups, in the three multivariate models (Table 3).

In this study, we investigated the impact of marital status on survival outcome in NPC patients diagnosed between 2004 and 2013 based on a population-based cohort. Our results showed that widowed patients had a poor CSS compared with those who were married, divorced, or single.

The survival of NPC was related to disease stage in our study, which is consistent with the results of other studies from the endemic area of NPC (21,22). Several studies have found that marriage was related to diagnosis at early-stage disease, with a higher proportion of distant disease found in unmarried groups (8-15). In a SEER study of 51272 head and neck cancer patients (6.1% of whom had NPC), being unmarried was also associated with advanced tumor stage (16). However, our study showed that early T-stage was highest among married patients, while widowed patients comprised the highest proportion with N0 stage. As there was no survival difference between the married, divorced, and single groups in our study, we further reanalyzed married, divorced, or single versus widowed status, and did not find a significant difference in T-stage, N-stage, or M-stage in the non-widowed patients compared with the widowed group. Approximately 50% of patients in our study were at local advanced stage, which may be due to the difficulty of early diagnosis in NPC. Therefore, family support may not have been associated with regular screening visits in NPC. Although the US is not an epidemic area for NPC, we still believe that family support plays an important role in the early diagnosis, treatment, and post-treatment care of NPC.

The difference in the extent of care provided may potentially affect patient outcome after cancer diagnosis. Previous studies have indicated that married patients were more likely to receive curative therapy and high-quality care, compared with widowed patients (23,24). A SEER study that included 1260898 patients and 10 cancer sites showed that married patients tended to receive definitive therapy more than their unmarried (including never married, divorced, separated, and widowed) counterparts (9). In the current study, although widowed patients had favorable characteristics including node-negative disease and females compared to non-widowed patients. However, the married, divorced, and single patients were more likely to receive radiotherapy and chemotherapy than their widowed counterparts. The potential reason to explain the unfavorable prognosis of widower individuals is undertreatment. Several studies have indicated that single patients were more likely to have delayed treatment or refuse treatment than patients who were married (25,26). However, further subgroup analysis of single patients was not performed in these studies.

A previous SEER study by Xu et al. (19) was also aimed to investigate the effect of marital status in NPC between 1973 and 2012, and the results indicated that unmarried patients had significantly poorer CSS and OS compared to married patients. However, the effect of marital status including married, divorced, single, and widowed were not further compared in the multivariate analysis, it may therefore be exaggerated the impact of marriage and underestimated the effects of the widowed patients. In addition, the T-stage and N-stage were also not identified due to the interval of the study spanned nearly 40 years. Moreover, the chemotherapy usage was not recorded in the study. In the present study, we only included patients with complete demographics, clinicopathologic and treatment parameters to minimize the potential impact of various parameters on the results, and our results indicated that patients with widowed group had poor CSS compared to patients with married, divorced, single.

The results of our study are consistent with those from previous studies of various cancer sites showing that widowed patients were at increased risk of cancer mortality (12,13,17,18). The influence of marital status on survival outcomes can hypothetically be explained by psychosocial factors that are independent of clinicopathologic features and extent of treatment. From a physiologic standpoint, the mechanisms for investigating the effect of psychosocial factors on survival in cancer have yielded many reasonable explanations. The association between marital status and cancer-related death is often described in terms of the positive effects of the marital relationship, which may provide socially supportive actions including encouraging spouses in healthy behavior and in pursuing curative treatment, and helping to reduce anxiety and stress during the course of and after treatment (27). In addition, several studies have proposed that increased psychological stress and decreased psychosocial support may impair the immune response and contribute to tumor progression by activating the hypothalamic-pituitary-adrenal axis. This regulates the release of glucocorticoids and catecholamines, which further directly influences the tumor microenvironment (28,29) and has been implicated in cancer survival (29-32).

In our study, more widowed patients were female. It has been observed that the amount of natural killer cells is significantly reduced in women whose husbands have recently died, compared with controls (33). In addition, significantly higher rates of severe depression have been found in divorced and widowed patients (34). It is intuitive that decreased social support may seriously impaired cellular immune function, and a higher level of social support would enhance the cells responsible for recognizing and killing cancer cells by activating natural killer cell activity (35,36). Although most of the previous studies were performed with non-NPC patients, the physiologic mechanisms of the effects of marital status on survival may be similar. These data support the suggestion of a link between social support, marriage, and immune responses such as natural killer cell activity. Our analyses consistently showed that widowed patients had the worst outcome in cancer-related death, and the survival benefit previously attributed to marriage is explained by the inferior survival of widows.

The limitations of our study should be considered. First, the SEER program only records marital status at the time of diagnosis; whether marital status changes after diagnosis is not reported. Such change may also affect survival and confound the difference in survival outcomes according to marital status. Second, there may be a considerable proportion of patients who are not legally married, but live in de facto same- or opposite-sex partnerships. This may contribute to an underestimate of the true impact of social support on survival outcomes. Third, detailed information about radiotherapy, chemotherapy, disease recurrence, and comorbidities was lacking in the SEER database. In addition, the SEER database had recorded a high specificity of data for radiotherapy and chemotherapy. However, overall sensitivity was 80% and 68% for radiotherapy and chemotherapy data, respectively (37). Finally, the results of our study can only be generalized to the US population and are not representative of the global population, especially of NPC in epidemic areas.

In conclusion, our results suggest that being widowed increases the risk of NPC mortality, when compared with NPC patients who are married, divorced, or single. Our study demonstrates that widowed patients are a newly identified high-risk subgroup with significantly poorer prognosis, who may potentially benefit from seeking social support and personalized care in the absence of a marital relationship. The targeted incorporation of social support into the integrated treatment and personalized care of NPC patients should be a national healthcare priority for providers and policymakers.

30. Garssen B, Goodkin K. On the role of immunological factors as mediators between psychosocial factors and cancer progression. Psychiatry Res. 1999;85(1):51-61