Two different GSK3 isoforms, where GSK3α is a resident of Chr19q13.2, and GSK3β from Chr 3q13.33, with 98% identical Kinase domain [12]. Both isoforms perform similar function and shows overlapping function in Alzheimer diseases progression, cell cycle and proliferation. Both isoform also play a key role in regulating APC dependent β-catenine phophorylation dependent degradation, is to regulate cell proliferation [13]. This redundancy or distinct function of GSK3 isoform could be varied depends entirely on cellular context, yet to be explore in transformed cells. Till date many reports, particularly in various cancer GSK3β is oncogenic in gliomas, whereas is tumor suppressor in certain epithelial cancer. However, recently few reports address GSK3α as therapeutic candidate in prostrate, melanoma, lung cancer.

Total RNA was extracted from U87 cells; it was reverse transcribed using first strand cDNA (Bio-Rad Laboratories) as per the manufacturer's instructions. hnRNPA1 gene was PCR amplified, with annealing temperature(55°C) optimized for maximum product yield. The hemagglutinin (HA) tag was attached to the N terminus of hnRNPA1 by including the HA tag in the forward primer, carried out using specific primers: sense- 5'- AGGATCCATGACCatgtacccatacgatgttccagattacgctGGATCTAAGTCAGAGTCTCCTAAA-3'antisense- 5'- GGTCGACTTAAAATCTTCTGCCACTGCCAT -3' with BamH1 and Sal1 restriction endonuclease site (underlined), respectively, at their 5' and 3'end. The amplified products were then digested and cloned into BamH1 and Sal1 sites of pBABE mammalian expression vector.

Knocking down of GSK3α with two doses of siRNA viz. 6nM & 10nM in U87 & A172 Glioma cells augments phosphorylation at GSK3β (Tyr216) activation and phosphorylation at GSK3 alpha (Ser 9) is inactivation, resulted increase in expression of hnRNPA1, c-Myc, p-ERK1/2 & Cyclin D1 (Fig.2A). Similarly in A172 glioma cells expression of hnRNPA1, c-Myc, p-ERK1/2 & Cyclin D1 were prominently higher in GSK3α knock down cells at high dose (Fig.2B). We also examined and compared proliferation rate of U87MG control and U87-GSK3α RNAi (lentiviral transduced) cells. From here our data indicate that U87-GSK3α RNAi stable cells proliferated many fold higher than U87MG control cells, additionally compared proliferation rate of cell after incubating cells with Temozolomide -alkylating drug (100µM) (Fig. 2C). Under TMZ stress, GSK3 alpha knock down cells delayed Temozolomide dependent inhibition in growth of cells. Cell counting was performed using Hemocytometer at different days (0, 1, 5 7). Then similar experiment was performed where cytoplasmic and nuclear extracts were made for normal cells as well as after treating with Temozolomide for 48 hrs. Interestingly, translocation of phosphorylated form of ERK1/2 kinase from cytoplasm to nucleus is relatively very high. along with nucleus translocation effect on cMYC and beta catenine was observed in Temozolomide treated cells (Fig. 2D). This all making sense as reported previously, that MAPKinase signaling and β-catenin proto-oncogene in case of Glioma promote proliferation and cancer stemness [47, 48].

Comparative expression of GSK3, Akt kinase and hnRNPA1 in glioma cell lines: Glioma cell lines (U87, U373, LN229 and A172) protein Lysate were evaluated by western blotting for GSK3, Akt & hnRNPA1. Ponceau staining was performed for equal loading control. 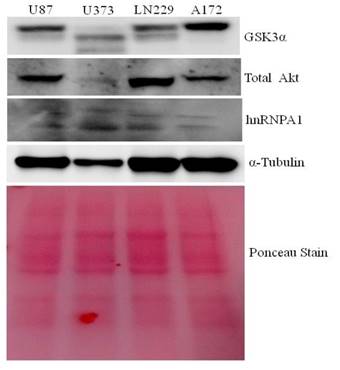 hnRNPA1 expression was assessed in transiently transfected GSK3β plasmid and Empty vector in U87 & U373 cells, where we have observed GSK3β dependent increase in hnRNPA1 expression, with decrease in GSK3α expression (Fig.3A), reveals auto regulatory effect of hnRNPA1 between GSK3(α/β) isoforms. Further-more validated by measuring the stability of hnRNPA1 in Gsk3α and Gsk3β knock down cells at protein level, using cycloheximide (100μg/ml) treatment at different time points (0, 2 & 4hr). Stability of HnRNPA1 is very much reduced in Gsk3β knock down as well as in Akt knock down cells, whereas hnRNPA1 is comparatively stable in Gsk3α knock down cells (Fig.3B). Gene knock down effect was phenotypically observed and pictures were taken under phase contrast microscope, with or without cyclohexamide (100μg/ml) treatment before making lysates. More number of stressed cells or loss of spindle shape phenotype were visualized in Gsk3beta knock down cells compared to Gsk3 alpha knock down U87 cells (Fig S3). Whereas, hnRNPA1 dependent signalling cascade after silencing Gsk3alpha or Gsk3 beta in MCF7 cells (Breast Cancer cells), is not significantly antagonistic in nature, as we observed in glioma cells (Fig S2).

Proto-oncogene c-Myc co-operates BCL-XL in gliomagenesis. Moreover, Survivin is a potential cancer biomarker of IAP family member, inhibits apoptosis. These all three genes were significantly much higher in Gsk3 alpha knock down cells and are less in Gsk3β knock down cells (Fig 4B). Also observed high mRNA transcript of differentially expressed Cyclin's (B1, D1, E1, E2) in Gsk3α knock down & Gsk3β over expressing cells, however is much lesser in Gsk3β knock down or hnRNPA1 knock down U87 cells (Fig 4C). Satisfactory knock down of Gsk3α and Gsk3β, hnRNPA1 and over expression of Gsk3β at mRNA level expression were evaluated by real time- qRT-PCR (Fig.S1).

p70S6K acts downstream of the mammalian target of rapamycin (mTOR). Activation of p70S6K and its downstream target ribosomal protein S6Kinase mediates nutrient and mitogen-stimulated translation, and is essential for cell growth and proliferation [16]. From our study, we observed activation of p70S6Kinase in GSK3α knock down cells where as was downregulated in hnRNPA1 knockdown cells, along with apparent increases GSK3α (Fig 5A), thereby affecting cell viability (Fig 5B) and apoptosis in Gsk3α and hnRNPA1 knock down cells (Fig.5 C).

Consistent with our previous results, our study indicates oncogenic hnRNPA1 expression is depend upon the absence of GSK3 alpha and over expressed GSK3 beta in glioma cell.

GSK3, a regulatory Ser/Thr protein kinase, exists in two distinct isoforms, GSK3α and GSK3β [17]. AKT kinase dependent GSK3α/β signaling network in various cancers is interpreted in varied outcomes, more likely to be a survival, differentiation, migration, apoptosis etc [18, 19]. Interfering directly GSK3α/β in lung [20-22] or prostate cancer [23, 24] promotes apoptosis. Under wide scale study, where selectively inhibiting GSK3 kinase in gliomas intended to be a promising candidate[25-28] promotes expression of c-Myc dependent apoptotic proteins, and induces cytotoxicity[29]. Majority of inhibitors used selectively against GSK3β kinase also have many off targets, includes GSK3α isoform, which is been reported with distinct apoptotic function as reported in various other cancers. Inhibition of GSK3β using AR-A014418 has been demonstrated to be a glioma inhibitory in xenograft mouse model [30, 31], where also found inactivation of GSK3α phospho-Tyrosine in U87 MG. From our previous study, inactivation of both GSK3β along with GSK3α kinase, enhances apoptosis could be because of dominant effect of GSK3β kinase in gliomas [32]. Initiating apoptosis with challenge of reoccurring event attempted us to study individual GSK3 isoform function. One of the most prominent observations of the present study is counteracting effect of GSK3α and β isofrom, where specific knock down GSK3α promote ERK1/2 activation & cell survival where as knocking down of GSK3β promotes apoptosis. 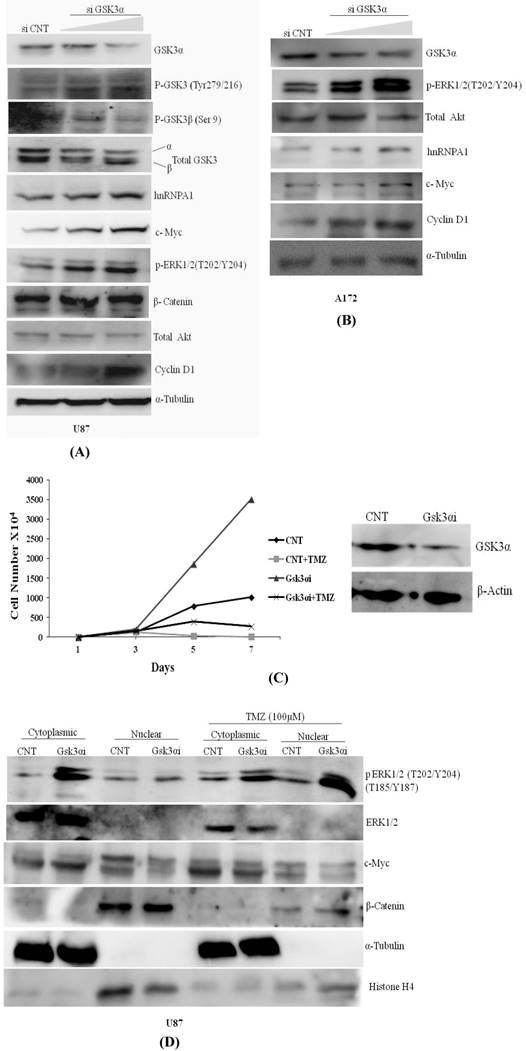 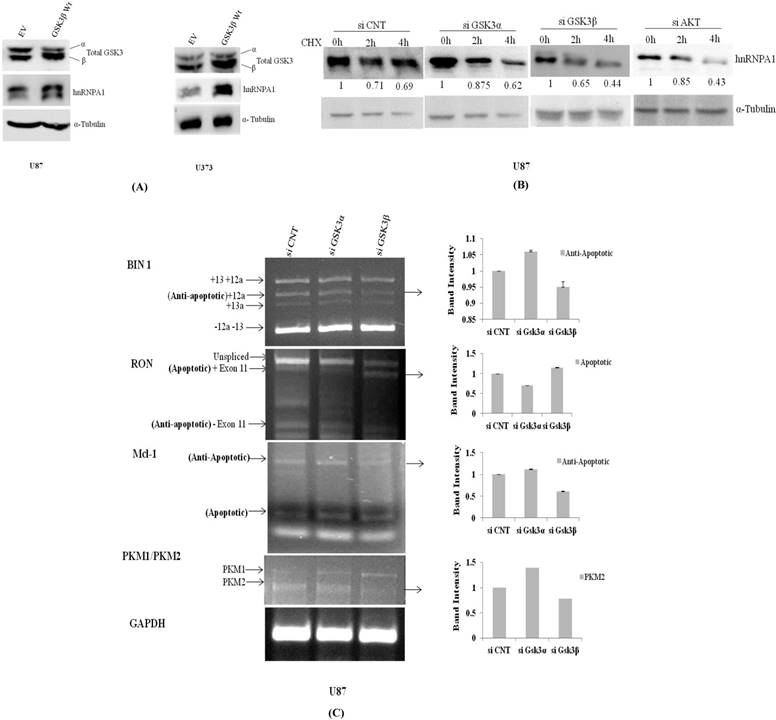 Many previous reports showed activated ERK1/2, is quite likely correlated with activated state of growth factor receptors [33], with inactivation of GSK3 kinase [34, 35]. Many evidences of ERK1/2 activation been reported in glioma, breast cancer, melanoma, head and neck cancer, lung cancer [36]. Phosphorylation of GSK3 beta kinase (Ser9) inactivates its regulatory apoptotic effect [37]. GSK3 was also proposed as a negative regulator of ERK1/2 in colon cancer [38] where both ERK1/2 and PI3kinase antagonizes GSK3β activity [39]. Phosphorylated ERK1/2 depending upon localization have diversified cytoplasmic and nuclear substrate, apparently involve in cell apoptosis or proliferation [40]. From our previous published study, we did observe inhibition of ERK1/2 activation in presence of GSK3 kinase specific inhibitors, increases apoptosis [32]. However, from our present study prominent activation of ERK1/2 and hnRNPA1 thereby increases cell proliferation and viability in GSK3α knock down cells. Similarly, in another set of experiment transient over expression of hnRNPA1 activates ERK1/2 and suppresses GSK3α expression promotes cell survival, comprehend our overall finding. Alteration in hnRNPA1 expression in glioma development context is interesting approach to look down if it is GSK3 dependent, where we observed that GSK3β cooperate with hnRNPA1 but not with GSK3α. Therefore, affecting mRNA splicing is interesting to understand to target the key pathways during glioma development. 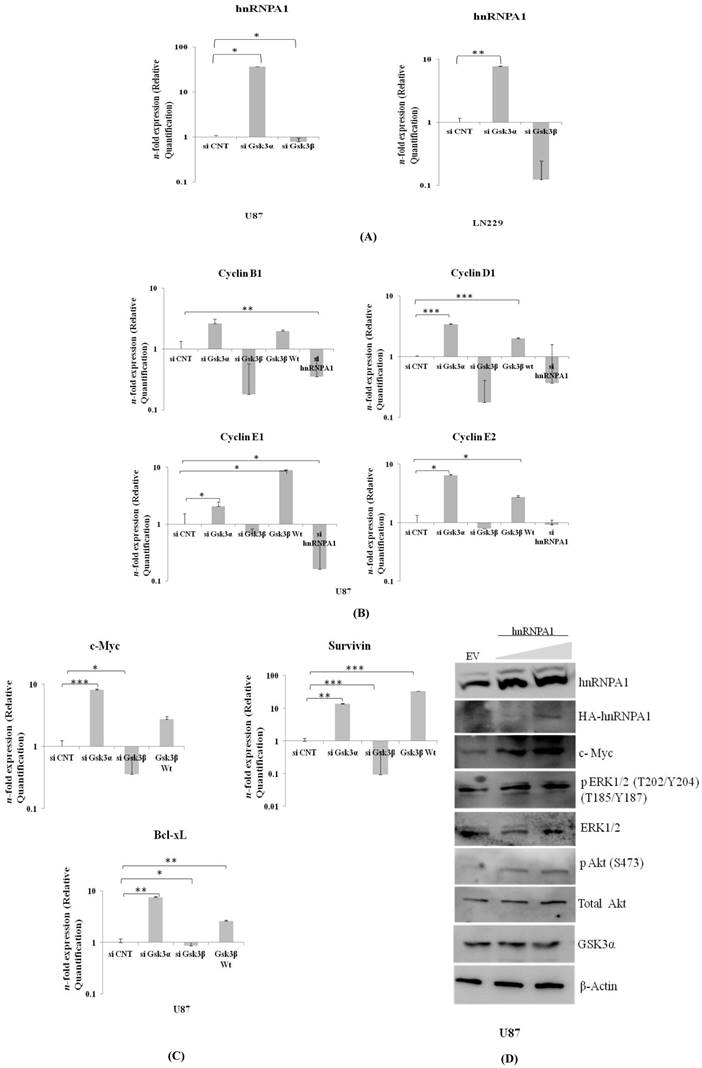 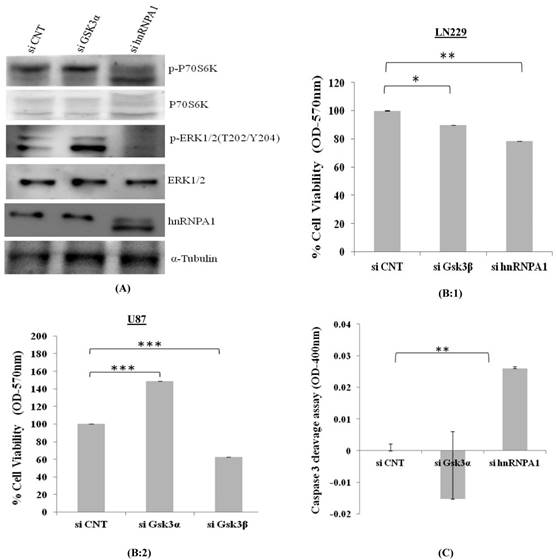 Alternative splicing (AS) regulates gene expression and thereby introduces proteomic diversity [41]. Misregulation of AS is involved in cancer development and tumor maintenance [42]. Till date, AS event has been reported to be a challenging task in predicting the therapeutic gene targeted biology in gliomas, majority of gliomas reoccur with very low patient survival. Here, we have observed significant variation in the expression of hnRNP A1 after specific knockdown of GSK3α and β, which helped us to put forth our investigation to explore the alternative splicing pattern of few of the dominant genes known to undergo alternative splicing and contribute to tumorigenesis. We identified alternative splicing events modified by hnRNP A1, among them Mcl-1 an anti-apoptotic member of Bcl-2 family, undergoes AS event which produces two functionally distinct proteins, Mcl-1 (S) (pro-apoptotic) and Mcl-1 (L) (anti-apoptotic) [43, 44]. From our results, we have detected a presence of dominantly expressing anti-apoptotic transcript variant after GSK3 knockdown. In addition, several studies done in glioma's demonstrated higher expression of M2 isoform of pyruvate kinase (PK) than M1 isoform of PK expressed by normal tissues [45], thus limiting pyruvate production and activating aerobic glycolysis (Warburg effect) [46]. Mostly all glioma exhibits a high ratio of PKM2 to PKM1 RNA expression. The results of these studies are in agreement with our data in showing that after GSK3α down regulation, PKM2/PKM1 ratio is increased, indicating a possible role of GSK3α in regulation of glycolytic tumor. The present data suggests the antagonistic ability of both GSK3 isoform (α/β) in promoting apoptosis and cell viability, depending on the alternative splicing patterns of these genes modulated by hnRNPA1.

Isoform specific role of GSK3α/β in gliomas has not yet been elucidated. Dissecting the role of GSK3α in glioma helped us to determine the contradictory function of both the isoforms. Silencing GSK3α led to activation of ERK1/2 as well as hnRNPA1, increases anti-apoptotic splice variants. Thus, proliferation of glioma cell increases. Our study has shed light to target GSK3 beta isoform along with restoration of GSK3 alpha in gliomas.

The authors are thankful to the Director of Dr. B.R Ambedkar Center for Biomedical Research, University of Delhi, India for research maintenance though intramural funding. This project was funded and supported by Prof. Ramalingaswami Fellowship of A.K.Y, from Department of Biotechnology, New Delhi, Research & Development and DST-Purse funding facility from University of Delhi (INDIA). This project is also supported by Science and Engineering Research Board, New Delhi (India).

AKY conceived, coordinated the study, interpreted data and wrote the manuscript. V.V has done all experiments, N.J for technical assistance. All authors read and approved the final manuscript.