Background: To assess the prognosis of neck residue nasopharyngeal carcinoma (NPC) patients and the efficacy of neck dissection in the treatment of these patients.

Conclusions: NPC patients who had pathologically proven neck residue are associated with poor prognosis. Management with neck dissection alone seems not to be sufficient for these patients.

Nasopharyngeal carcinoma (NPC) differs from malignant tumors arising from other head and neck mucosal sites with regard to its epidemiology, pathological types, and therapeutic management[1]. NPC has a distinct ethnic and geographical distribution in Guangdong, Southern China, where environmental factors, genetic predisposition, and Epstein-Barr virus (EBV) infection play an important role in its pathogenesis[2]. Radiotherapy (RT) is the primary treatment modality for NPC patients. Several prospective randomized trials[3-6] and meta-analyses have demonstrated that concurrent chemoradiotherapy (CCRT) with or without adjuvant chemotherapy is superior to RT alone for the treatment of NPC[7-9]. Currently, intensity-modulated radiotherapy (IMRT) is the preferred radiation technique for NPC patients. It provides excellent locoregional control[10], but there is still a small proportion of patients who have residual lymph nodes after complete treatment, i.e., neck lymph nodes that have not regressed completely by 3 months (i.e., neck lymph nodes larger than 1cm in diameter shown in MRI) after definitive radiotherapy with or without chemotherapy[11]. The management of these patients is challenging. According to our previous study[12], the incidence of patients having presumed neck residue after IMRT is about 3%, a finding that was consistent with the results of Leung's study[13]. The National Comprehensive Cancer Network (NCCN) guidelines advocate neck dissection for these patients[14]. Although many previous studies have reported the safety of neck dissection in the treatment of neck residue NPC patients, there is little literature on the prognosis of these patients following neck dissection, as compared with that of NPC patients without neck residue. Most previous studies grouped neck residue patients and patients presenting with recurrent nodal disease together and had control groups that did not comprise matched patients without neck residue[15-18]. Therefore, it is still unclear whether treatment with neck dissection provides a survival benefit for patients with neck residue.

We conducted this case-cohort study to examine the prognosis of neck residue NPC patients and the efficacy of neck dissection in the treatment of these patients.

For this retrospective case-cohort study we recruited 68 NPC patients who had been diagnosed with residual cervical lymphadenopathy after completion of radical radiotherapy with or without chemotherapy. The study was approved by the Institutional Review Board of the Sun Yat-sen University Cancer Center. Patients were eligible for this study if they fulfilled all of the following criteria: (1) had neck nodes that had not regressed completely by 3 months (i.e., neck lymph nodes larger than 1cm in diameter shown in MRI) after completion of therapy; (2) had undergone neck dissection in the Department of Head and Neck Surgery, Sun Yat-sen University Cancer Center; (3) had malignant cells found in their final neck specimen; (4) were newly diagnosed cases of NPC without metastasis; (5) had biopsy-proven World Health Organization types II-III NPC[19]; (6) had no history of previous anticancer therapy; and (7) had completed radical RT with or without chemotherapy. NPC patients with neck recurrence (i.e., reappearance of lymphadenopathy after initial complete regression of nodal disease)[15] or neck residue patients having received chemotherapy or salvage re-irradiation were excluded. Clinical, pathological, and radiological data of the eligible patients were reviewed and retrospectively reclassified. All patients were restaged according to the 7th AJCC/UICC staging system.

From January 2006 to December 2014, 292 NPC patients underwent neck dissection in the Department of Head and Neck Surgery at Sun Yat-sen University Cancer Center. Of them, 91 were NPC neck residue patients. Histopathological examination of the specimens from these patients showed 77 (84.6%) to be positive for malignant cells and 14 (15.4%) to be negative. During the follow-up period, 1 of the 14 patients who had clinically presumed but pathologically negative neck disease had disease progression. Bone metastasis was seen in 1/14 (7.1%) patients. No death and locoregional recurrence was seen in all during the follow-up period. As shown in supplement Figure 1, both of the 3-year PFS and 3-year DMFS of patients who had clinically presumed but pathologically negative neck diseases were 92.3% in our sample. As mentioned, the favorable outcomes of 14 patients who had clinically presumed but pathologically negative neck disease were also roughly the same as the NPC patients without neck residue. For this reason, we focus on the clinical characteristics and outcomes of the patients with positive histological findings. Among the 77 patients with positive histological findings, clinical data of initial treatment were not available for 9 patients who had completed radical RT with or without chemotherapy at other hospitals, and these patients were therefore excluded. The remaining 68 patients who met all the eligibility criteria comprised the cases (the neck residue group). Each patient in the neck residue group was matched with three other NPC patients who had been treated at Sun Yat-sen University Cancer Center between January 2006 and October 2014; these patients (n = 204) were selected from the institutional database and comprised the control group. Cases and controls were matched for the following: age (± 5 years), gender, pathological type, TNM stage, RT technique, type of treatment, and time period of therapy (±18 months) from the same institute. When an exact match was not available, a patient with more favorable characteristics was selected from the institutional database to prevent the results from being biased in favor of the study group. Table 1 and table 2 have summarized the matched characteristics and other characteristics of the patients in the two groups, respectively.

All patients were evaluated by a complete physical examination, fiberoptic nasopharyngoscopy, magnetic resonance imaging (MRI) or computed tomography of the head and neck, chest radiography, abdominal ultrasonography, electrocardiography, bone scan by emission computed tomography, complete blood count with differential count, biochemical profile, and Epstein-Barr virus serology. All patients diagnosed with NPC were treated with standard-course conventional radiotherapy or IMRT, whether chemotherapy was administered depended on age and the stage of disease.

Patients were assessed at the time of treatment completion, at least once every 3 months over the next 3 years, and at least once every 6 months thereafter. The patient evaluation at follow-up included clinical examination, nasopharyngeal endoscopy, MRI of the nasopharynx and the neck area, chest radiograph, and abdominal ultrasonography. Patient status was determined by reviewing the medical records of patients as well as the follow-up requests from the treating physicians. All neck residue patients underwent neck dissection.

Among the 272 participants, there were 208 men and 64 women. The two groups were well balanced with respect to baseline demographic and disease characteristics (Table 1). Cases and controls were completely matched for gender, pathological type, and TNM stage. The percentages of patients matched for age, RT technique, time period of therapy, and type of treatment method were 90.1%, 96.7%, 94.1%, and 78.7%, respectively. The association between neck residue and the other clinicopathological characteristics of NPC patients was analyzed using the χ2 test (Table 2).

This is the first case-cohort study to compare the prognosis of the neck residue NPC patients with that of patients without neck residue. Previous studies have indicated that for nonmetastatic NPC the 5-year PFS rate is 66.7% - 82.1% and the 5-year OS rate is 68.2% - 87.4%[10, 20, 21]. In our study the 3-year PFS and OS rates in neck residue NPC patients were only 46.7% and 85.3%, respectively. We also found that neck residue increased the risk of progression and death more than 5-fold and 2-fold, respectively, which is partially consistent with the results of Zhang et al.[18]. 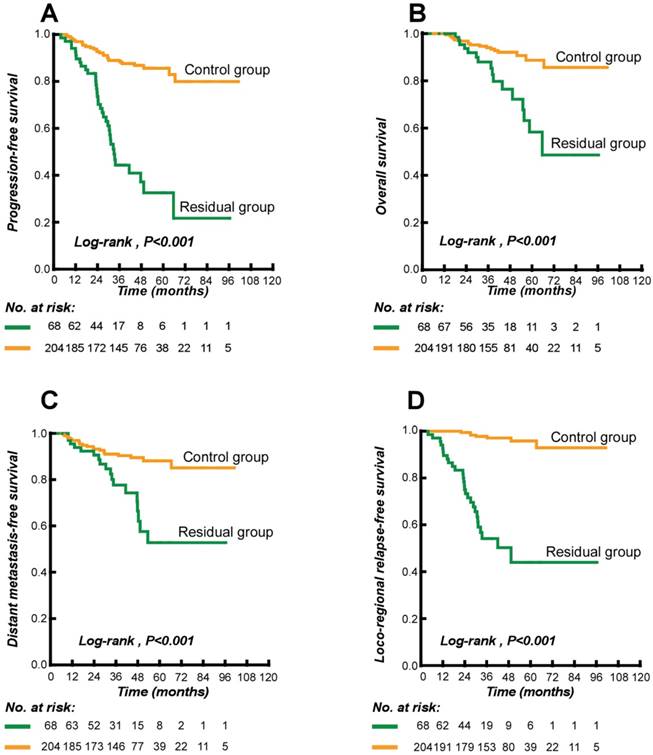 Although NPC is a radiosensitive cancer, it appears that the residual lymph nodes may not be sensitive to radiotherapy. Radioresistance has been linked to increased likelihood of recurrence and distant metastasis[24, 25] and radioresistance can pose a major challenge in NPC treatment, but little is known about how it develops and further research is needed to clarify the mechanism of radioresistance of residual lymph nodes[26-28]. In addition, previous studies have showed that significant morbidity was also associated with the frequent radiation complications, including serious radiation fibrosis, radiation encephalopathy, cranial nerve injury, and cumulative dose of radiation complications after reirradiation[29, 30]. However, the chemotherapy after neck dissection can kill tumor cells that might have remained after macroscopic tumor removal and also can eliminate the micrometastasis. As a systemic treatment, chemotherapy is expected to reduce the occurrence of distant metastasis and provide an additional survival benefit over neck dissection in neck residue NPC patients. For these reasons, our group is intending to initiate a multicenter prospective randomized trial to compare neck dissection plus adjuvant chemotherapy with neck dissection alone to assess how adjuvant chemotherapy can benefit the management of neck residue NPC patients.

There are some limitations to our study. First, this was a retrospective study; second, our sample size was small because we were dealing with rare cases; and third, we were not able to match cases and controls completely for all factors, which may have introduced a selection bias.

We gratefully recognize the patients who participated in this study.

The dataset supporting the conclusions of this article is included within additional file.

The study was approved by the Ethics Committee of the Sun Yat-sen University Cancer Center.

19. Shanmugaratnam K, Sobin LH. The World Health Organization histological classification of tumours of the upper respiratory tract and ear. A commentary on the second edition. Cancer. 1993;71:2689-97