Patterns of Failure and Survival Trends Of 720 Patients with Stage I Nasopharyngeal Carcinoma Diagnosed from 1990-2012: A Large-scale Retrospective Cohort Study

Objectives: To evaluate the patterns of failure and survival trends of patients with stage I nasopharyngeal carcinoma (NPC) treated with radiotherapy alone over the last 20 years.

Results: After a median follow-up period of 105 months (range 1-280 months), we observed the increasing trends in survival and disease control. The 3-, 5-, and 7-year OS rates increased from 97.0%, 86.7%, and 81.7% in the first calendar period (1990-1996) to 100%, 99.3%, and 98.0% in the last calendar period (2008-2012), respectively (P<0.001). Additionally, significant increasing trends could be seen in the PFS and LRFS during the four calendar periods. In the subgroup analysis, the OS, PFS and LRFS in patients diagnosed older than 40 years had greater improvement than the younger patients. However, the rate of distant metastasis was stable and relatively low, as the 5-year distant metastasis rate ranged from 0.2%-2.5% among the four calendar periods.

Conclusion: The survival rates in patients with stage I NPC showed increasing trends from 1990 to 2012. The advances of radiotherapy provided excellent locoregional control and enhanced overall survival, and in particular, the IMRT decreased locoregional relapse.

Nasopharyngeal carcinoma (NPC) is an endemic disease in southern China and Southeast Asia, where the peak incidence is 0.5%[1]. NPC is characterized by the aggressive natural behaviours of early lymphatic spread and high preference of distant metastasis. Fortunately, radiotherapy (RT), the primary treatment, has been proven to be curative for NPC, especially in early stages.

In 1965, Moss et al. established radiotherapy as the primary treatment for NPC [2]. Since then, conventional 2-dimensional radiotherapy (2DRT) was mainly used until 1990s. During the past two decades, with the accumulation of knowledge on radiobiology and target volume delineation, radiotherapy techniques have evolved from 2DRT to a 3-dimensional conformal technique (3DRT), and then to an intensity modulated technique (IMRT), which increased conformity of tumour coverage with better sparing of normal structures. Improvement of overall survival (OS) in patients with NPC in the last two decades was previously reported [3-7]: the 5-year OS rate was 50% in 1954-1992, and then increased to 77% in 1990-1999 and 85% in 2000-2010. Nevertheless, the increase in survival outcome was attributed not only to the evolution of the radiotherapy technique but also to the development of imaging technology, which enhanced the accuracy of clinical staging and radiotherapy planning [8-11], the increasing use of more effective chemotherapy for patients with advanced stages [12], and better supportive care in recent years.

For the past 20 years, radiotherapy alone was the standard treatment for patients with stage I NPC. With the development of radiotherapy, we were interested in investigating the failure pattern and trend of survival and disease control during this time period. However, in previous studies with small numbers, a short time span, or short-term follow-up [3, 5, 9, 13-16], it was difficult to identify the significant difference in survival trends, or to discover convincing explanation for the benefits from the radiotherapeutic evolution. Thus, we conducted a large-scale retrospective analysis and a long-term follow-up, aiming to identify the failure pattern and trends of survival in patients with stage I NPC who received only radiotherapy treatment in 1990-2012.

A total of 720 patients with stage I NPC who received treatment between January 1990 and December 2012 at Sun Yat-sen University Cancer Centre were enrolled in this retrospective cohort study. This study was approved by the Clinical Research Ethics Committee of Sun Yat-sen University Cancer Centre, and written informed consent was provided by the participants. Details of the inclusion and exclusion criteria are available in Supplementary Materials. Pretreatment evaluations consisted of a medical history and a clinical examination of the head and neck region, blood chemistry tests, a computed tomography (CT)/magnetic resonance imaging (MRI) scan from the suprasellar cistern to the collarbone, fibreoptic nasopharyngoscopy, chest X-ray, abdominal sonography, and a whole-body bone scan or whole-body 18FDG-PET/CT (if available).

All patients with stage I NPC were treated with radiotherapy alone based on the principles of treatment for NPC patients at Sun Yat-sen University Cancer Centre. For the patients diagnosed in 2002 or earlier, the primary radiotherapy was 2DRT or 3DRT, and IMRT was also gradually performed in patients diagnosed in 2003 and later, in addition to 2DRT/3DRT. Previous publications have reported the three types of RT techniques in detail [17-19], which are presented in Supplementary Materials.

During the first three years after treatment, patients were followed up at least once every three months and then every six months thereafter until death. At each follow-up visit, we conducted a detailed history and a complete physical examination of the patient. When tumour relapse occurred, nasopharyngoscopy, MRI or CT of the head and neck, chest radiography, abdominal sonography, whole-body bone scan or PET/CT were performed.

SPSS (Statistical Package for the Social Sciences) 20.0 for Windows (SPSS, Armonk, New York, US) was used for statistical analyses. Survival curves were depicted using the Kaplan-Meier method and compared by the log-rank test. Chi-square test was conducted to evaluate the differences in categorical variables. All reported probability values were two-sided, and P<0.05 was considered to be statistically significant.

A total of 720 consecutive patients with stage I NPC who received treatment between January 1990 and December 2012 at Sun Yat-sen University Cancer Center (550 males and 170 females; median age, 47 years; range, 18 to 97 years) were enrolled. Respectively, 98.2%, 94.1%, 90.3%, and 84.3% of the patients had a complete follow-up of 3, 5, 7 and 10 years. The median follow-up period was 105 months (range 1-280 months). As shown in Table 1, there was no significant difference in the distributions of age, gender, EA-IgA1, comorbidities of DM, or CVD (P>0.05) in the patients of the four calendar periods while there were significant differences for the imaging and radiotherapy techniques, body mass index (BMI), VCA-IgA1, smoking, comorbidities of chronic HBV infection and family history of NPC (P<0.05).

5-year OS, PFS, LRFS and DMFS rates of the four calendar periods subdivided by age-layers are shown in Figure 2A-D. The 5-year OS rate of patients in the age categories of 40-49, 50-59, and ≥60 showed a rising trend. This increasing trend was, in particular, most obvious in patients over 60 years old (Figure 2A). The same trend could be found in the 5-year PFS and LRFS rates (Figure 2B&C). For the patients in the age category of 18 to 39 years old, the 5-year OS, PFS, and LRFS rates were stable and quite high from 1990 to 2012. Figure 2D shows that the 5-year DMFS rate, regardless of age categories and calendar periods, remained stable and relatively high as well. Subdivided by genders, the 5-year OS, PFS, LRFS rates also showed increasing trends (Figure S3), which were presented in Supplementary Materials.

In subgroup analyses, the survival comparison between the 2DRT/3DRT arm and the IMRT arm, during the whole study period from 1990 to 2012, was shown in Supplementary Materials Figure S4. The remarkable improvement was found in OS, PFS, and LRFS of patients treated with IMRT, compared with those treated with 2DRT/3DRT, revealing that the differences were statistically significant (P<0.001), except for the DMFS. To address potential biases, we further conducted the analysis on the survival comparison between the 2DRT/3DRT arm and the IMRT arm, diagnosed during the years 2003 to 2012 (Figure 3), in which we found that only the LRFS was higher in the cohort of the IMRT arms (Figure 3C; P<0.05) than that of the 2DRT/3DRT arms. No significant differences, however, were found in the OS, PFS, and DMFS rates between the IMRT and 2DRT/3DRT arms (Figure 3A, 3B, 3C; P>0.05). This result indicated that IMRT improved locoregional control thanks to radiation technique evolution.

To our knowledge, this is the first study that has reported a retrospective large scale cohort study with a relatively long-term follow-up. A total of 720 patients with stage I NPC were enrolled in our study, and the follow-up lasted for over 20 years. It was undisputable that the prognosis of patients with stage I NPC had been significantly improved during the last two decades. Such improvement was prominently reflected in the increased trends of the OS, PFS, and LRFS rates (Table 2).

P value was calculated with the Pearson χ2 test.

Pattern of failure: the whole series and different groups

As shown in Figure 1C, the LRFS rate was much higher in 2003 or later, revealing the significant improvement of locoregional control in the latter two calendar periods. We considered that this improvement in LRFS was due to the gradual performance of IMRT in patients diagnosed in 2003 and later. Firstly, a remarkable improvement in LRFS of patients was shown in the analysis on survival comparison between the 2DRT/3DRT arm and the IMRT arm, during the whole study period from 1973 to 2008 (Figure S4). We further carried out a subgroup analysis on the survival comparison between the 2DRT/3DRT and the IMRT arm, restricted to patients diagnosed in 2003 and later (Figure 3), and found that IMRT also significantly improved the locoregional control. This is due to the higher radiation dose administered to reach the better tumour control with IMRT, compared with 2DRT/3DRT methods. The result was similar to other reports [3, 18, 22-27]. In other words, the IMRT changed the locoregional failure of the early stage NPC, which was the main failure pattern in the 2DRT/3DRT era (1990-2002) (Table 3).

The OS of patients with stage I NPC showed remarkable improvement, which was prominently attributed to the radiotherapy technique evolution, as shown in the current study and previous reports [3-5, 9, 13-16]. However, a subgroup analysis of the current study (Figure 3A), restricted to the patients diagnosed in 2003 and later, revealed that there were no significant differences in the OS between the 2DRT/3DRT and IMRT arms, which may be due to occult biases on the OS in the latter decade: salvage treatments including reirradiation [28], chemotherapy [29, 30], surgery after timely discovery of relapse with advances in imaging technology, or possibly, supportive care improvement. 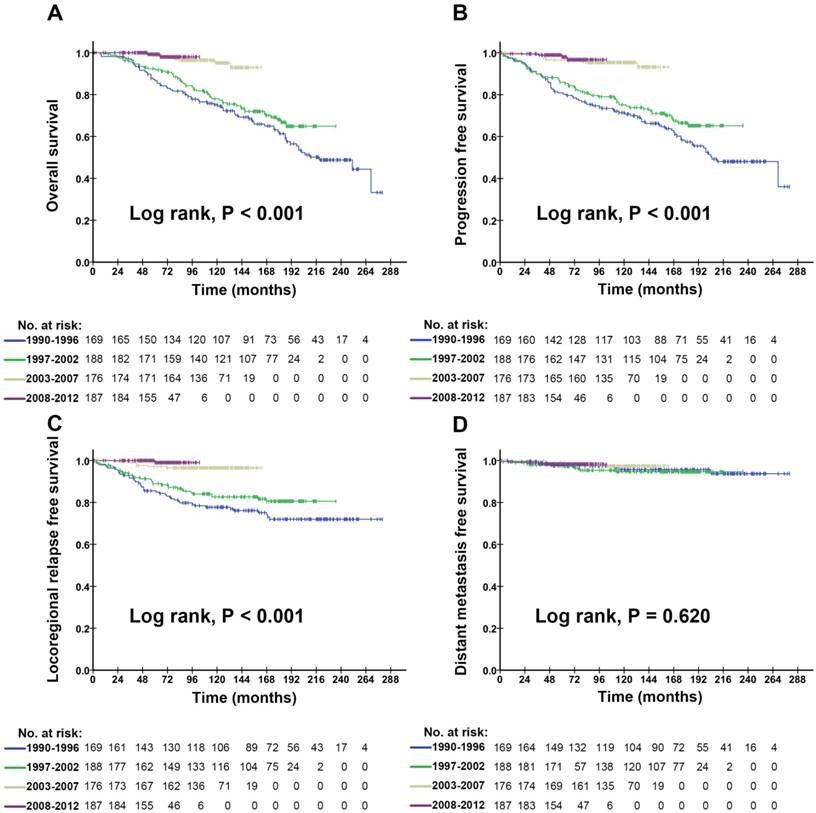 One important issue is the stage migration phenomenon, which is inevitable with changing imaging techniques. From the statistics of our current study, CT was used as the main imaging technique in the first decade, accounting for 95.7%-100%, but gradually, CT was replaced by MRI, which accounted for 80.1%-99.5% in the latter decade. The use of the PET/CT increased from 3.4% in 2003-2007 to 11.2% in 2008-2012. As MRI has a higher resolution than CT, MRI worked better in the assessment of parapharyngeal spaces, marrow infiltration of the skull base, intracranial disease (advanced T stage), and deep cervical nodes (advanced N stage) [8]. PET/CT demonstrated greater accuracy in N and M staging compared to MRI [11], and the staging results, undoubtedly, affected the disease prognosis [9, 10]. In the first decade when CT was used as the main imaging technique for staging, it is possible that patients with advanced T, N and M stage NPC, who, of course, had a poor prognosis, were diagnosed with stage I (T1N0M0) NPC. As the imaging techniques became more advanced, the staging of patients with NPC became more accurate, and thus, the evolution of imaging techniques could be considered as another factor that explained the uptrend of the OS, PFS, and LRFS in the last two decades. 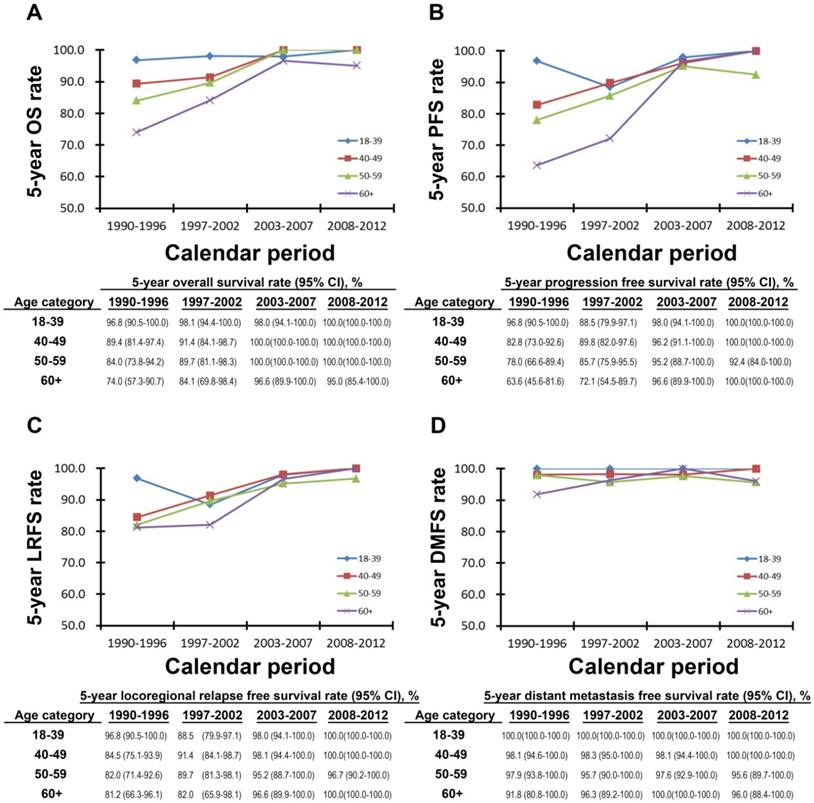 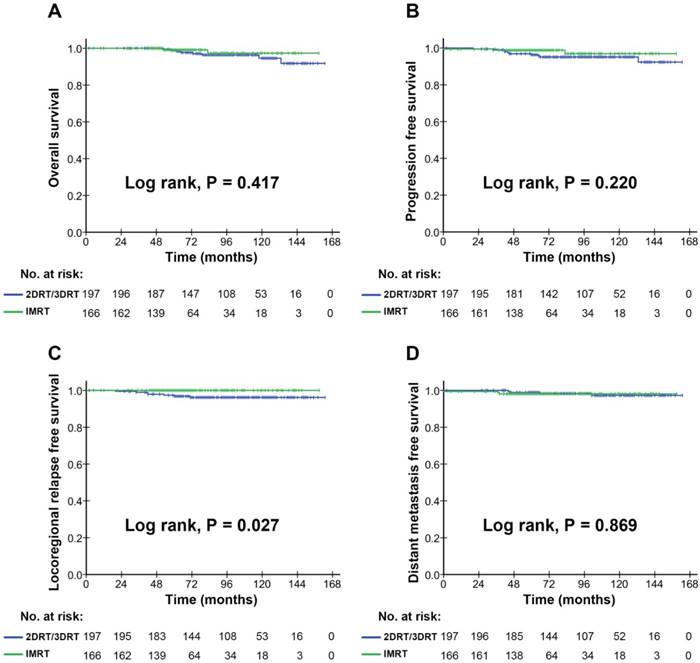 The current study, however, still has its limitations. Firstly, the data were collected from a single institution. Besides, complete and accurate data about the late RT-toxicities were difficult to obtain as time passed by, so it was hard to know if rates of side effects were significantly less with IMRT. Thirdly, only patients with NPC stage I were included in the discussion, so this study cannot fully reflect the prognosis tendency and failure patterns of stage II-IV NPC among different treatment eras. Nevertheless, we have found promising results from the treatment progress of stage I NPC in the last 20 years, which encouraged us to conduct further studies on patients with stage II-IV NPC.