Introduction: Esophageal cancer is one of the most common malignant tumors in the world. Eukaryotic translation initiation factors 3e (eIF3e) makes a notable difference in the initiation of protein synthesis and tumor progression. However, the role of eIF3e in ESCC has not been revealed yet. This study aims to investigate the bio-functional and prognostic role of eIF3e in human ESCC tissues and cells.

Methods: Immunohistochemical staining and Western blot were performed to detect the eIF3e expression in ESCC patients' tissues. The Kaplan-Meier product limit method and Cox regression were conducted to analyze the association between eIF3e expression, together with other related clinical/pathological features, and patients' prognosis. In the analysis of bio-functional role of eIF3e, CCK-8 and Transwell assay were performed to compare the proliferative and migrative ability after knockdown of eIF3e.

Conclusions: The eIF3e expression, or combined with other members of eIF3 complex, might predict poor prognosis of ESCC and serve as a potential breakthrough in the multimodality therapy of ESCC.

Esophageal cancer is one of the most common malignant tumors with high morbidity and mortality all over the world. China, Eastern Asia, where esophageal squamous cell carcinoma (ESCC) are markedly more than esophageal adenocarcinoma, suffer from the highest rates of incidence [1]. For lack of effective targeted therapy for ESCC, despite surgery, radiotherapy and chemotherapy, the prognosis of patients remains poor. Therefore, it is a meaningful trend to investigate the underlying molecular and cellular processes of carcinogenesis, which might offer novel therapeutic targets for treatments in the future [1, 2].

Protein synthesis is a regular procedure to maintain body metabolism and function. Also, during the course of carcinogenesis and progression, protein synthesis plays an important role [3]. In the initiation phase of protein synthesis, Eukaryotic translation initiation factors (eIFs) are the vital components for the formation of an initiation complex. The eIF3 is an 800-kDa molecular, which is the largest factor in the eIF family, made up of 13 subunits that are named from eIF3a to eIF3m [4]. Through binding Met-tRNAi to the 40S ribosome and facilitating ribosome recruitment to mRNA, eIF3 makes a notable difference in the initiation of protein synthesis. Among the 13 subunits of eIF3, eIF3e is the p48 subunit and contributes to the stability of the whole eIF3 complex [5]. However, the exact role of eIF3e in malignant tumor is still controversial in different types of tumors. In breast and lung cancer, eIF3e expression was down-regulated and served as a tumor suppressor[6]. On the contrary, in glioblastoma and colon cancer, eIF3e was demonstrated to overexpress and facilitate the tumor progression [7, 8]. To date, the role of eIF3e in ESCC has not been revealed yet.

This study aimed to investigate the bio-functional and prognostic role of eIF3e in human ESCC tissues and cells. We demonstrated that eIF3e was up-regulated in ESCC tissues and high level eIF3e negatively correlated with the survival of patients. We also revealed that knockdown of eIF3e expression with small interfering RNA (siRNA) could significantly inhibit the proliferation and migration of ESCC cells, which indicated the tumor-promoting role of eIF3e in ESCC.

Up to 241 patients who underwent radical esophagectomy in the Department of Thoracic Surgery, Zhongshan Hospital, Fudan University, China, from 2008 to 2009, were enrolled in the study. All of the primary ESCC and adjacent tissues were collected after surgery and embedded with paraffin. For the follow-up, each patient was required to take chest CT, abdominal ultrasonography and serum tumor markers every three month during the first year after surgery. Then, the period of the follow-up was extended to twice a year. Patients' clinical/pathological data were collected in details, including sex, age, tumor pathology, tumor size, tumor depth, lymph node metastasis, tumor-node-metastasis (TNM) stage (according to American Joint Committee on Cancer, eighth edition) [9], histological grade, and overall survival (OS, defined as the interval from surgery to death) and disease free survival (DFS, defined as the time elapsed from the date of surgery to the discovery of local relapse or distant metastasis). In the Statistical analysis of DFS, the exact span of 22 paitents' DFS could not be figured out during the follow-up. Therefore, the rest 219 patients were collected for the analysis of DFS. The whole follow-up was finished at July 1th, 2017. The study has got the approval of the ethics committee on human research of Zhongshan Hospital, Fudan University.

The human ESCC cell line EC109 and KYSE510 were selected for research and cultured in DMEM, supplemented with 10% fetal bovine serum and 100 IU/ml penicillin/streptomycin in a humidified incubator, under 95% air and 5% CO2 at 37℃.

Statistical analysis was performed with the SPSS 17.0. The correlations between the expression of eIF3e and clinical/pathological characteristics were analyzed by the Chi-square test. The DFS and OS curves were drawn with the Kaplan-Meier product limit method and analyzed with the log-rank test. The correlations between risk factors (related clinical/pathological characteristics) and DFS/OS were conducted with Cox proportional-hazards regression. The risk factors (covariates) included tumor size, tumor depth, lymph node metastasis, histological grade, TNM stage and eIF3e expression. The way of “mean ± standard deviation” was applied to note the data gathered in experiments. The comparison of individual variables were performed with Student's t-test, χ2 test, Fisher's exact test or Spearman coefficients to analyze the difference between each subgroup. Two-tailed tests at p<0.05 were considered statistically significant.

In the 241 ESCC tissues, we applied IHC to detect the eIF3e expression and found that cytoplasm was the main site for eIF3e staining (Fig. 1A). According to the scoring criteria described in the methods and materials, 23 patients were incorporated into low expression group (10%), while 218 patients were incorporated into high expression group (90%). Then, Chi-square test was applied to analyze the associations between eIF3e expression and clinical/pathologic features. As shown in Table 1, high eIF3e expression was correlated with deeper tumor depth (p=0.032), lymph nodes metastasis (p=0.023) and more advanced TNM stage (p=0.002), positively. In addition, with the progression of histological differentiation level, the percentage of high eIF3e expression, though not reaching the criterion of statistical significance, was gradually up-regulated (Table 1). However, no significant difference was found in the correlation between eIF3e and other factors, such as sex, age, tumor size, etc.

Analysis of the associations between eIF3e expression and clinical/pathologic features 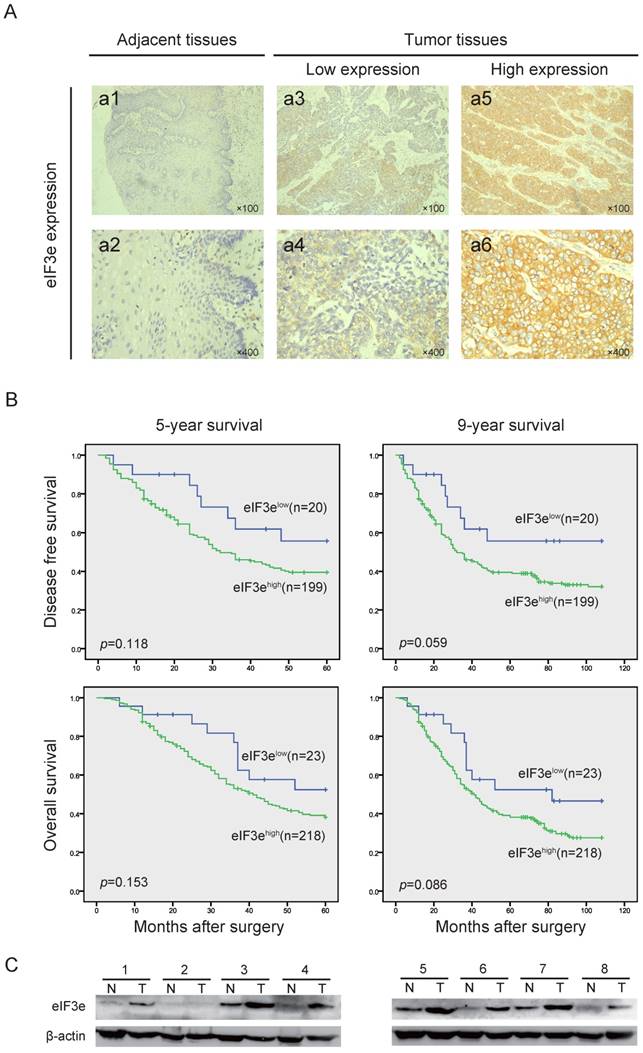 eIF3e is up-regulated in ESCC tissues

eIF3e promotes the cell proliferation and migration of ESCC

To explore the way of eIF3e to influence the bio-function of ESCC, we designed bio-functional assay (Fig. 2A). We constructed 3 fragments of siRNA to knock down the eIF3e expression in EC109 and KYSE510 cell lines. The efficiency of the transfection was high in both two cell lines, according to the Cy3-modified expression under light microscope and fluorescence microscope (Fig. 2B). The effect of the knockdown was validated through qRT-PCR and Western blot. As shown in the Fig. 2C and 2D, all the 3 fragments of siRNA showed great effect of knockdown in both two cell lines and we selected eIF3e-siRNA-1 and eIF3e-siRNA-2 for further study.

CCK-8 assay was performed to study whether eIF3e made a difference in tumor proliferation. As shown in Fig. 2E and S1A, in both two cell lines, the proliferative level of knock-down groups were significantly lower than that of normal control (NC) groups after 24 hours after transfection (p < 0.05), which indicated that eIF3e promoted the proliferation of ESCC (Fig. 2E and S1B). To investigate whether eIF3e also influence the migration ability of ESCC cells, we performed Transwell assay. The results in Fig.2F showed that the numbers of migration cells in knock-down group were significantly less than those in NC group (p < 0.05), which indicated that eIF3e promoted the migration of ESCC.

To explore the potential mechanism behind these bio-functional change, we applied Western blot to detect some potential related signaling pathway, including AKT, epithelial-mesenchymal transition (EMT), p53. The data showed that after knockdown of eIF3e, no significant change appeared in these pathway related markers level (Fig S2A). In the future, we will continue exploring the deeper mechanism behind the biological phenomena of eIF3e promoting the proliferation and migration of ESCC.

The function of eIF3 complex on tumor was investigated widely, among which eIF3e subunit was an important factor that made a difference in the initiation and progression of cancers [13]. It has been reported that eIF3e binds directly to eIF4G, through interaction, to play an important role in recruiting the ribosome to the mRNA [14]. In this study, we detected eIF3e expression in ESCC tissues and proved that eIF3e expression was up-regulated in cancer tissues compared with para-cancerous tissues. Through survival analysis, we demonstrated that high eIF3e expression correlated with poor prognosis. To explore the bio-function of eIF3e, we knocked down eIF3e expression and found that eIF3e promoted the cell proliferation and migration ability of ESCC, which might act together to promote the progression of ESCC and lead to poor prognosis. These data was the first step in our journey to explore the carcinogenesis role of eIF3 complex and the hidden mechanisms.

The earliest reports of eIF3e expression in tumors were in breast and non-small cell lung carcinoma [6, 15]. Both two studies demonstrated that eIF3e expression was down-regulated and might serve as a tumor suppressor. Later, Desnoyers and colleagues further proved that decreased eIF3e expression in lung and breast epithelial cells leads to epithelial-to-mesenchymal transition (EMT) through activation of the TGF-β signaling pathway [16]. However, in the study of glioblastoma, Sesen and colleagues demonstrated that eIF3e expression was elevated and inhibition of eIF3e expression led into decreased proliferation by the ways of cell cycle arrest and increased apoptosis [7]. Similarly, in colon cancer, high expression of eIF3e was detected and contributed to tumor progression and predict poor prognosis [8]. Therefore, the conflicts in the altered expression level of eIF3e in different tumors arouse our interests. We tried to detect the biological role of eIF3e in ESCC, in which no related study had been involved. Here, our data provided evidence that eIF3e over-expressed in ESCC tissues, accelerated tumor proliferation and migration ability, and correlated with poor prognosis. The results were consistent with the findings in glioblastoma and colon cancer, but contrary to the phenomena in breast and lung cancer. The altered expressional level between different cancers might be caused by the different pathologic patterns, which influenced the biological characteristics of each cancer.

eIF3e promotes the proliferative and migrative ability of ESCC. (A), the graph summarized the design of bio-functional assay. (B), the effeciency of the knockdown was validated through the Cy3-modified expression under light microscope and fluorescence microscope. (C and D), the effect of the knockdown was validated through qRT-PCR and Western blot analyses. β-actin was used as an internal reference. (E), the proliferative ability was assessed with CCK-8 assay at 24, 48, 72, and 96 hours after transfection. (F), the migrative ability was assessed with Transwell assay. (ns: no significance, * p <0.05, **p <0.01, ***p < 0.001). 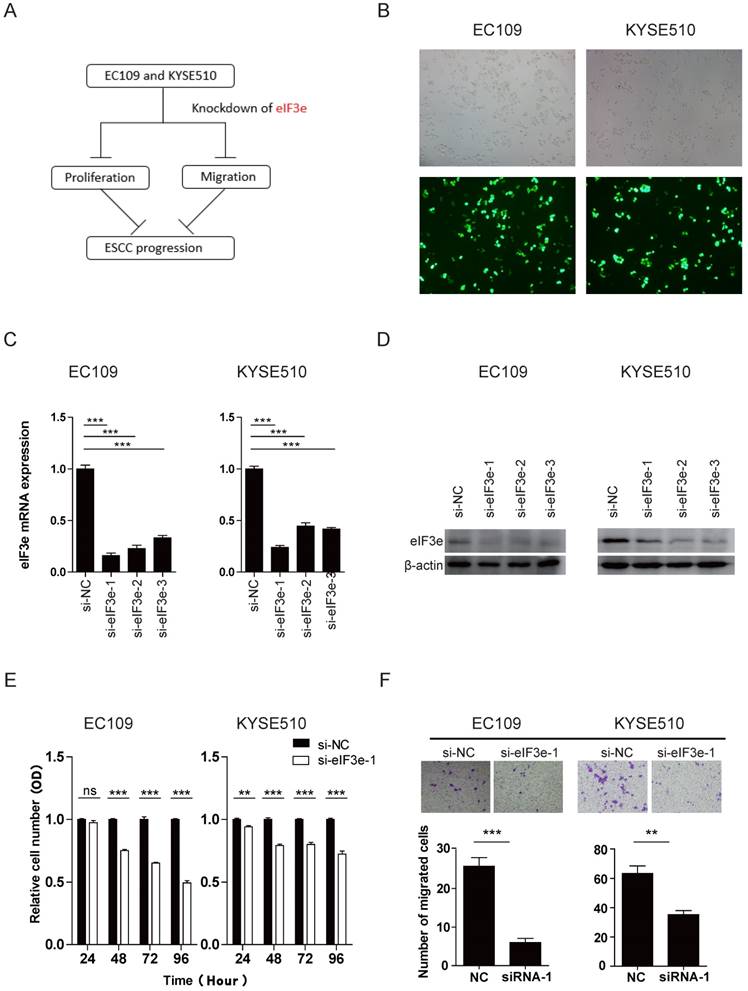 The potential mechanisms of eIF3e in tumorigenesis were still under exploration and far from understanding. Grzmil and colleagues created an in vivo model of eIF3e function in zebrafish and demonstrated that eIF3e could modulate MEK-ERK signaling pathway, of which disorder would lead into abnormal proliferation of cells and tumorigenesis [17]. Chen and colleagues found that eIF3e could down-regulated hypoxia inducible factor 2 alpha by hypoxia and pVHL independent regulation [18]. In breast cancer, Morris and colleagues demonstrated eIF3e served as a regulator of DNA double-strand breaks through RNF8-dependent ubiquitylation pathway [19]. These results unveiled the hidden mechanism of eIF3e and facilitates further study.

To conclude, we have demonstrated that eIF3e was up-regulated in ESCC tissues, and high levels of eIF3e plays an important role in ESCC cells proliferation and migration. Up-regulation of eIF3e was correlated with deep tumor depth, lymph nodes metastasis, and advanced TNM stage, which predicted poor prognosis of ESCC. Also, eIF3e might serve as a potential breakthrough in the multimodality therapy of ESCC and offers a valuable guide for further investigation. In future, we will continue investigating the carcinogenesis mechanism of eIF3e, together with other subunits of eIF3 complex, to explore novel therapy for ESCC.