Background: The limb-bud and heart gene (LBH) was discovered in the early 21st century and is specifically expressed in the mouse embryonic limb and heart development. Increasing evidences have indicated that LBH not only plays an important role in embryo development, it is also closely correlated with the occurance and progression of many tumors. However, its function in prostate cancer (PCa) is still not well understood. Here, we explored the effects of LBH on the proliferation and migration of the PCa cell line PC3M.

Conclusions: Our results reveal that LBH expression is down-regulated in the tissue and cell lines of PCa. LBH overexpression inhibits PC3M cell proliferation and tumor growth by inducing cell cycle arrest through down-regulating cyclin D1and cyclin E2 expression. LBH might be a therapeutic target and potential diagnostic marker in PCa.

Prostate cancer (PCa) was one of the most common malignant tumors of the male urinary system [1]. In 2016, there were approximately 180,890 new PCa cases and 26,120 PCa-related deaths in the United States [2]. Race, high-fat diet, age, and genetic predisposition [3, 4] are major contributing factors to malignant transformation. Most patients will eventually develop castration-resistant PCa (CRPC) after 12-18 months of androgen deprivation therapy [5-7]. To date, there is no effective therapy targeting CRPC. Gene therapy appears to be a potential effective biological therapy [8, 9]. An increasing amount of evidence shows that PCa formation is multifactorial, involving genetic alteration of oncogenes and tumor suppressor genes [10, 11]. Therefore, identifying these key genes, exploring their functional roles, and investigating the underlying molecular mechanisms are essential for better understanding of PCa pathogenesis.

LBH is a highly conserved, newly discovered transcription cofactor that is specifically expressed in the mouse embryonic limb and heart, and plays important roles in embryonic development [12-14]. Hassan et al. proposed that LBH is a member of the intrinsically disordered protein (IDP) family, as it exhibits a high degree of disorder, suggesting that conformational plasticity may influence LBH-dependent transcriptional activity [15]. Reiger et al. [16] found that LBH is a direct target gene of the WNT/β-catenin signaling pathway, and may act as a downstream effector of canonical WNT/β-catenin signaling in epithelial development and aggressive basal subtype breast cancers. A number of studies have indicated that Wnt/β-catenin signaling played an important role in PCa tumorigenesis [17]. High Wnt1 and β-catenin expression have positive correlation with PCa bone metastases and poor prognosis, while there is no β-catenin expression in normal prostate tissue [18]. LBH is also expressed in additional embryonicand adult tissues, including the gut, brain, spleen, lung, bones, kidney, and peripheral nervous system [13, 14, 19, 20]. Previously, we found the downregulation of LBH in nasopharyngeal carcinoma (NPC) tissue, which correlated with a more aggressive clinical course and significantly shorter disease-specific survival in patients with NPC and LBH overexpression inhibits the growth of NPC xenograft tumors in nude mice and in vitro [21]. Despite this association with NPC tumorigenesis, the functional mechanism of LBH in PCa tumorigenesis is unknown.

Therefore, in the present study, we examined the expression pattern of LBH in PCa tissues, and investigated the effect of LBH on the cell proliferation, cell cycle and migration of PCa cells. Its potential mechanism was also further clarified.

Stable cell lines were established as described previously [21]. Total RNA was reverse-transcribed with SuperScript III Reverse Transcription (Invitrogen). PCR product containing CDS of LBH gene was obtained through PCR with LBH primers (forward: 5'-CCCGTGTCATCCTCACTCG-3' and reverse: 5'-CAGATGCTGGCTGGTATGACC-3') and ligated into a CMV-ORF-SV40-eGFP-IRES-Puromycin vector (Lv201). Then, the recombinant LV-LBHs or LV-NC plasmids were co-transfected with the Gag/Pol, Rev, and VSV-G vectors into the 293T cells to produce recombinant lentivirus. After lentivirus infection of the PC3M cell, LBH-overexpressing cells PC3M-LBH and control cells PC3M-NC were obtained via 2-week puromycin (2 μg/ml) screening.

Immnunohistochemistry staining was performed using a previously described protocol [21]. Briefly, tissue sections were incubated overnight at 4°C with an anti-LBH monoclonal antibody (mAb; Sigma). Then, the sections were incubated 40 min with biotinylated anti-rabbit secondary antibody, and another 40 min with the avidin-biotinylated peroxidase complex. The sections were washed with distilled water (10 min), treated with diaminobenzidine (DAB) to visualize positive staining. The staining intensity was visually scored and stratified as follows: 0 (negative), 1 (weak), 2 (moderate), and 3 (strong).

Primers used for detection of mRNA Expression by qRT-PCR

Cells were seeded in six-well plates at a density of 500 cells per well and cultured for 10 days. Cell colonies were fixed with 4% paraformaldehyde solution, stained with 0.1% crystal violet, and counted under an inverted microscope.

For cell cycle analysis, Cells (5 × 105) were harvested and washed twice with ice-cold PBS, fixed with cold 70% ethanol at -20 °C overnight, and stained with 50 mg/mL propidium iodide (Sigma) containing 5 mg/mL RNase A. For cell apoptosis assay, Cells were trypsinized and double stained with annexin V-APC and propidium iodide using an Annexin V Apoptosis Detection Kit APC (Cat: 88-8007, ebiosicence) according to the experimental procedure. The analysis of cell cycle and apoptosis was performed with a flow cytometer (Beckman-Coulter, USA).

Serum-free RPMI 1640 medium (100 µL) containing 1 × 105 cells was added to the top chamber of 8-µm pore Transwell chambers (#3422; Corning, Cambridge, MA, USA). The bottom chamber was filled with 750 µL RPMI 1640 medium containing 10 % FBS. After 24-h incubation, the cells were fixed with 4 % paraformaldehyde for 10 min and stained with 0.1 % crystal violet solution for 10 min. Cells attached to the downside of filter were observed under inverted microscopy, and nine random fields per insert were counted.

Four-week-old male BALB/c nude mice were supplied by the Experimental Animal Center of Guangdong province, China. All mice were maintained in a specific pathogen-free facility and were randomly divided into three groups of five mice each, namely the groups. 5×106 PC3M, PC3M-LBH or PC3M-NC cells were injected subcutaneously into the right axillary region of each animal. Tumor size was measured twice a week with a Vernier caliper; tumor volume was calculated as follows: 0.524 × (length) × (width)2. After 4 weeks, the mice were sacrificed, and the tumors were dissected and weighted.

Each experiment was performed in triplicate and in parallel. Data are presented as the mean ± SD. Differences among groups were analyzed using one-way analysis of variance. All statistical analyses were performed using SPSS 18.0 software (Chicago, IL). P < 0.05 was considered statistically significant.

LBH expression in tissues and cell lines of PCa

We analyzed the expression and distribution of LBH protein in PCa tissues by immunohistochemistry (Fig. 1A). LBH was strongly positively expressed in adjacent non-cancer epidermal cells of prostate cancer tissue, while lower LBH expression was observed in almost all PCa tissues, especially in high Gleason score (GS) PCa tissue. We also found the expression of LBH was down-regulated at mRNA and protein level in 3 PCa cell lines, especially in PC3M cells, as compared with normal prostate epithelial cells RWPE-1 (Fig. 1B, 1C, P<0.05). Therefore, PC3M with relatively lower LBH expression was selected for the subsequent experiments.

To explore the function of LBH in PCa cells, a stable LBH-upregulated PC3M-LBH cell line and a PC3M-NC control cell line were established (Figure 2A). qRT-PCR indicated that LBH in PC3M-LBH cells was overexpressed by up to >150 times (Fig. 2B, P< 0.001), and the protein expression of LBH was concordant with the mRNA level (Fig. 2C, P < 0.05). These findings suggest that the stable LBH-overexpression cell line PC3M-LBH was successfully constructed. 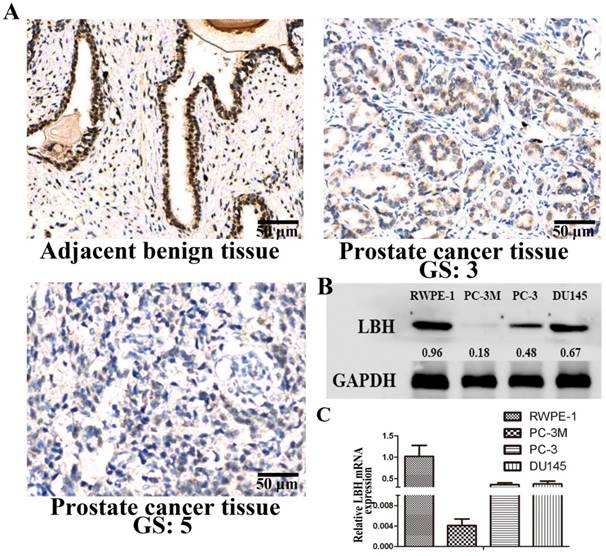 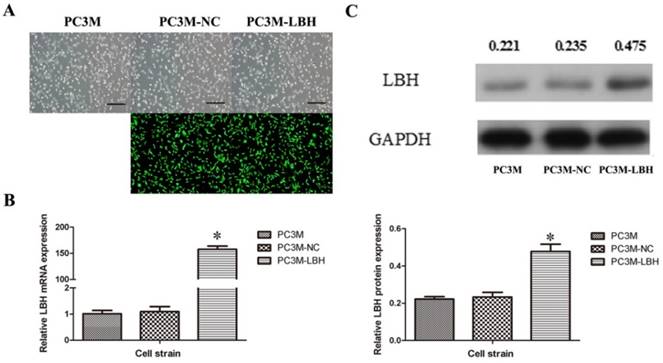 PC3M-LBH cells had a lower ratio of S-phase cells but a higher ratio of G1-phase cells than PC3M cells and PC3M-NC cells (Fig. 5A). The apoptosis rate of PC3M-LBH cells was no significntly change as compared with that of PC3M cells and PC3M-NC cells (P > 0.05) (Fig. 5B). Taken together, these results suggest that LBH can induce G1 arrest in PC3M; however, it has no significant effect on cell apoptosis of PC3M.

The effect of LBH on PCa cell motility was assessed using the Transwell migration assay. The result showed LBH significantly reduced the migration of the PC3M-LBH cells as compared to the PC3M cells and the PC3M-NC cells (P < 0.001) (Fig. 6), and the result suggest that LBH expression reduce the metastatic potential of PC3M cells effectively.

To determine the mechanism of cell cycle arrested by LBH, we detected the expression of cell cycle-related genes at mRNA and protein levels. Cyclin D1 and Cyclin E2 expression was decreased in PC3M-LBH cells as compared with PC3M-NC cells (Fig. 7, P < 0.05).

In the present study, we examined the expression pattern of LBH in PCa tissues. LBH was predominantly localized in the cytoplasm and nuclear both in PCa tumor cells and normal cells, and LBH expression in PCa tissues was lower than that in the non-tumor tissues. We also found that LBH expression was low in the PCa cells compared with the normal RWPE-1prostate epithelial cells. These findings suggest that the loss of expression of r LBH may contribute to the carcinogenesis of PCa. To determine the function of LBH in PCa, we constructed a stable LBH-upregulated PC3M-LBH cell clone, and found that LBH expression in the PC3M-LBH cells was upregulated by > 150 times as compared with PC3M-NC or PC3M cells after several passages, indicating successful construction of a stable LBH-overexpression PC3M-LBH cell clone. Furthermore, LBH overexpression suppressed the PCa cell proliferation properties in vitro and tumor growth in vivo. 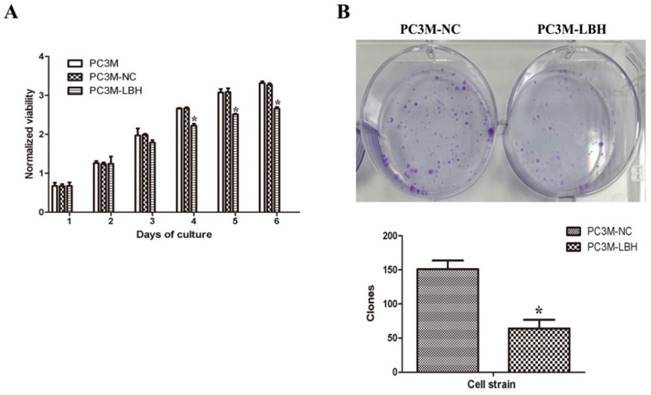 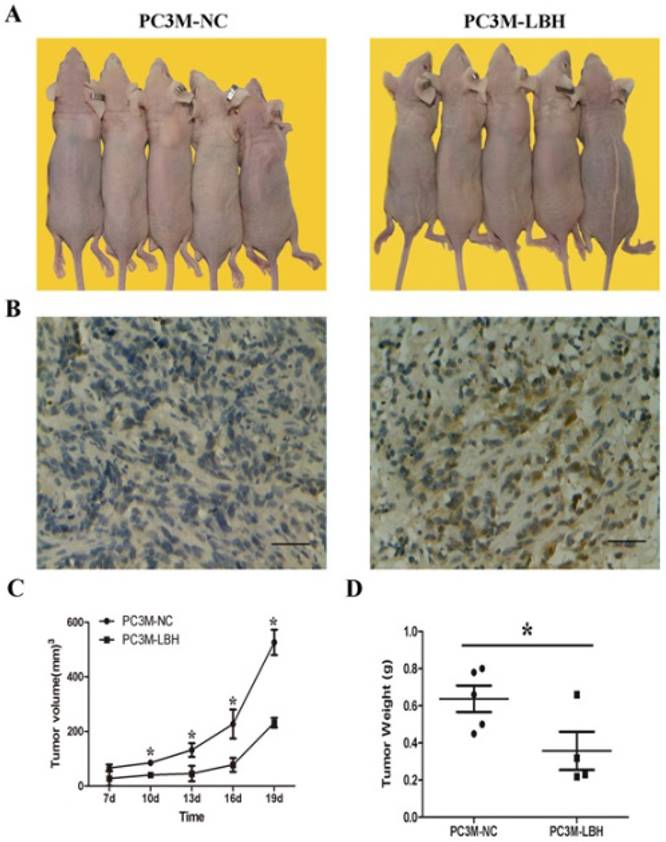 The potential mechanisms underlying the tumor-suppression role of LBH were also explored. The mechanism of disordered cell cycle regulation is an important cause of uncontrolled cell proliferation that leads to cancer [22]. The precise transition from G1 to S phase in the cell cycle is essential for the control of eukaryotic cell proliferation, and its misregulation promotes oncogenesis [23]. We found that LBH overexpression in the PC3M-LBH cells significantly induced cell cycle arrest in the G1/0 phase as compared with PC3M cells and PC3M-NC cells, and there was a simultaneous, statistically significant reduction of cells in S phase and G2/M phase, while LBH overexpression had no statistically significant effect on the apoptosis. Furthermore, LBH inhibited the protein expression of the cell cycle-related gene cyclin D1 and cyclin E2 in PC3M cells. c-Myc is a key cell cycle regulator; many studies have found that c-Myc acts as an oncogene, playing indispensable roles in tumor formation and maintenance [24, 25]. Cyclin D1 and Cyclin E2 are key signaling nodes that regulate G1 to S phase transition [26, 27]. These results are consistent with our previous study on NPC [21]. LBH typically induces NPC cell cycle arrest at G1/S transition, and can suppress the growth of transplanted NPC tumors in vivo. Taken together, these data indicate that LBH overexpression potently inhibits PCa cell growth by inducing cell cycle arrest in the G0/G1 phase, rather than apoptosis, which strongly suggests the role of LBH in PCa cell proliferation. The molecular mechanisms involved in the cell cycle inhibition require further investigation. 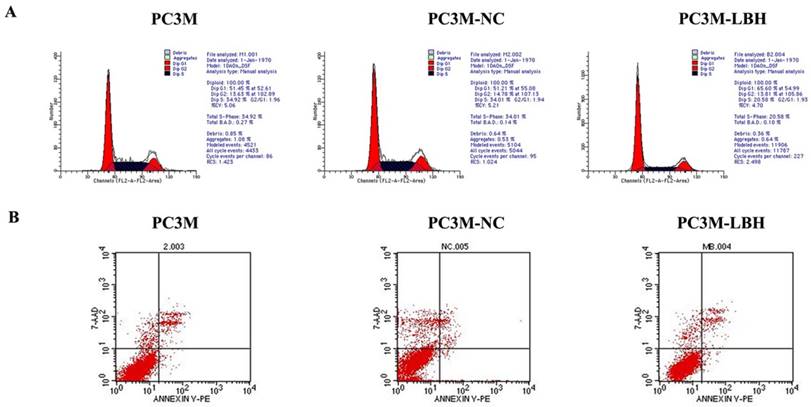 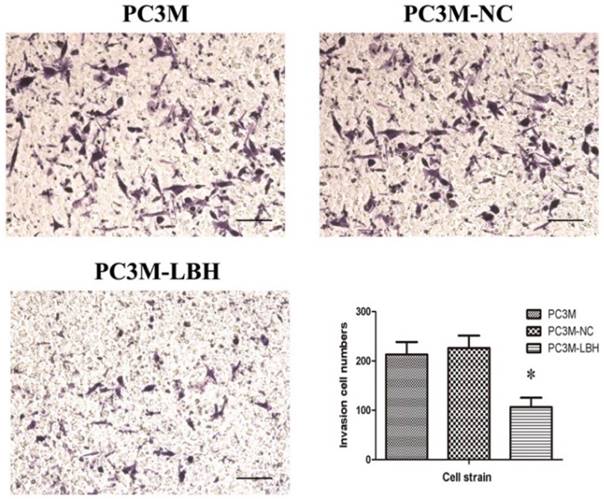 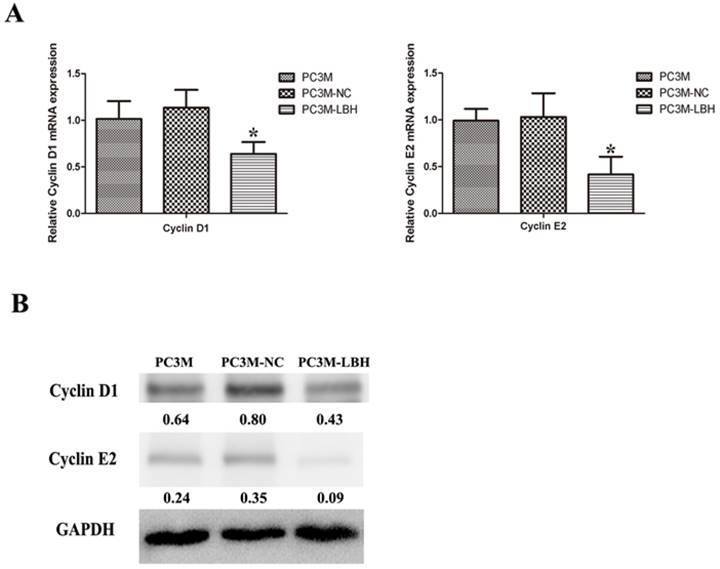 Taken together, the present study confirms that LBH inhibits the proliferation of PC3M PCa cells by downregulating the cell cycle-related gene cyclin D1 and cyclin E2, and induces cell cycle arrest in G0/G1 phase. Our studies provided new insights into the molecular mechanism involved in the regulation of PCa growth and provide novel therapeutic targets and strategies for treating PCa.