Vincristine is extensively used chemotherapeutic medicine to treat leukemia. However, it remains a critical clinical problem with regard to its toxicity and drug-resistance. AMP-activated protein kinase (AMPK) is an energy sensor that is pivotal in maintaining cell metabolic homeostasis. It is reported that AMPK is involved in vincristine-induced apoptosis. However, whether AMPK is involved in chemotherapy-resistance is largely unclear. It is well-documented that metformin, a widely used medicine to treat type II diabetes, possesses anti-cancer activities, yet whether metformin affects leukemia cell viability via vincristine is unknown. In this study, we showed that both AMPKα1 mRNA and phosphorylated AMPK protein levels were significantly decreased in clinical leukemia samples. We further demonstrated that metformin sensitized leukemia cells to vincristine-induced apoptosis in an AMPK-dependent manner. In addition, knockdown of AMPKα1 significantly reduced the effects of metformin on vincristine-induced apoptosis. Taken together, these results indicate that AMPK activation is critical in metformin effects on vincristine-induced apoptosis and suggest a putative strategy of a combination therapy using metformin and vincristine in treatment of leukemia.

Leukemia is a group of cancers that arise from the bone marrow and results in abnormal white blood cell proliferation and survival. In 2014, world health organization reported that leukemia developed in 352,000 people globally and caused 265,000 deaths. Chemotherapy is the primary treatment for leukemia. Vincristine (VCR) is a well-established cytotoxic drug extensively used in the treatment of leukemia [1]. Vincristine binds specifically to tubulin, which leads to microtubule depolymerization, cell cycle arrest and apoptosis in mitotic cells [2]. At the molecular level, vincristine has been shown to regulate p53, p21, Fas/Fas ligand and c-Myc expression [3, 4]. Moreover, vincristine inhibits NF-κB signaling [5] and JNK activity [3]. However, it remains a clinical problem for vincristine with regard to its toxicity and drug -resistance [6, 7].

Metformin is widely used to treat type II diabetes. It dramatically decreases blood glucose levels and enhances cell sensitivity to insulin [8]. It has been reported that metformin inhibits the mitochondrial respiratory chain (complex I), which leads to AMP-activated protein kinase activation [9]. In recent years, clinical data have indicated that metformin reduces the cancer incidence in patients with type II diabetes [10]. Metformin inhibits cancer cell proliferation, survival [11] and promotes cellular senescence [12]. Moreover, metformin has been shown to enhance chemotherapeutic drugs-induced apoptosis [13-15]. At the molecular level, metformin modulates various key proteins, including mTOR, p53 and SIRT 1 [16], as well as down-regulation of Her2 and cyclin D1 expression [17, 18].

AMP-activated protein kinase (AMPK) functions as an energy sensor, and plays an important role in maintaining cell metabolic homeostasis. AMPK is a heterotrimer that contains a α-catalytic subunit, a β-subunit, and a γ-subunit [19]. Metabolic stresses, such as glucose starvation and hypoxia, activate AMPK via threonine 172 phosphorylation by AMPK upstream kinases, including LKB1 and Calcium/calmodulin-dependent protein kinase kinase (CaMKK) [20, 21]. Upon activation, AMPK regulates a subset of downstream targets, including acetyl-CoA carboxylase (ACC) and mTOR [22, 23]. It is reported that AMPK plays a role in regulating growth and survival of multiple cancer cells including leukemia cells [24-26]. However, it remains unclear whether AMPK expression and/or activity is altered in leukemia cells and whether AMPK is involved in leukemia cell resistance to vincristine.

Lentiviruses were amplified by HEK 293T cells transfected with psPAX2 and pMD2.G packaging plasmids and lentiviral-based shRNAs specific for green fluorescent protein (GFP) (GAAGCAGCACGACTTCTTC) or AMPKα1 (GTATGATGTCAGATGGTGAATT) plasmids using Lipofectamine 2000. Viruses were collected at 60 hours after transfection. Cells at 50% confluence were infected with recombinant lentiviruses or empty vectors in the presence of 1 μg/mL polybrene before being subjected to 12 hours of incubation at 37°C with 5% CO2.

Cell viability was assessed by MTS assay using a CellTiter 96 Kit (Promega, USA) according to the manufacturer's instructions. Trypan blue exclusion assay (C0011, Beyotime, China) were performed according to the manufacturer's instructions. The percentages of viable cells were measured by Countess II (Life technologies, USA). For FACS analyses, cells were grown to approximately 80% confluence in 6-well plates, washed with cold PBS and then fixed in 70% ethanol at 4°C overnight. The cells were subsequently stained with 50 μg/mL propidium iodide (PI) supplemented with 80 μg/mL RNase A at 37°C in dark for 1 h. The cells were then subjected to FACS analyses using a FACSCalibur Low Cytometer (Becton Dickson).

Quantitative data were analyzed using Student's t-test to determine significance. The data are presented as the mean ± SEM., as noted in the figure legends. 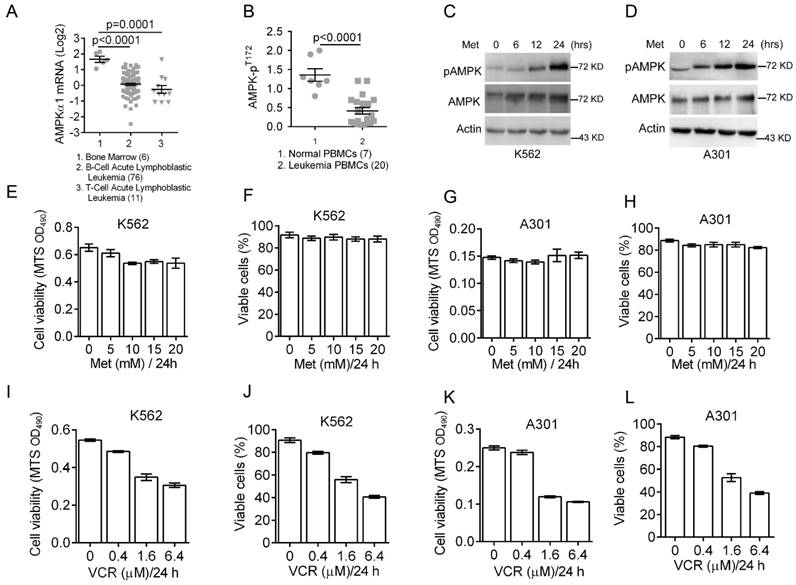 The effects of metformin or vincristine on viability of leukemia cells

It has been reported that AMPK plays a role in vincristine-induced apoptosis in melanoma cells [28]. To investigate the role of AMPK in vincristine-induced leukemia cell apoptosis, K562 and A301 cells were treated with 5 mM metformin in the presence or absence of 0.4 μM vincristine for 24 hours. As shown in Figure 2, combination of metformin and vincristine, but not metformin or vincristine alone, significantly induced apoptosis (Figure 2A-2B), which was further supported by subsequent MTS or Trypan blue exclusion assays for cell viability (Figure 2C-2F) and FACS analyses for subG1 population (Figure 2G).

Metformin sensitizes leukemia cells to VCR-induced apoptosis. K562 or A301 cells were treated with or without 5 mM metformin in the presence or absence of 0.4 μM VCR for 24 h prior to Western blot analyses (A-B), MTS assay or trypan blue exclusion assay for cell viability (C-F) and FACS analyses for subG1 cell population (G). The data are presented as the mean ± SEM from three independent experiments (***P < 0.001; **P < 0.01). 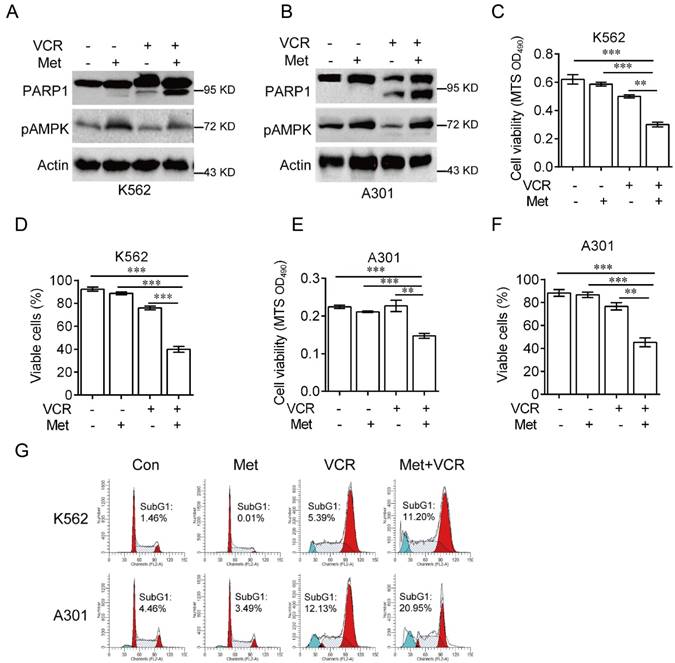 Knockdown of AMPKα1 desensitizes metformin-mediated enhancements of VCR-induced apoptosis.(A) K562 cells stably expressing shRNA against AMPKα1 were subjected to Western blot analyses, as indicated. K562 cells stably expressing shRNAs against AMPKα1 or GFP were treated with or without 5 mM metformin in the presence or absence of 0.4 μM VCR for 24 h prior to Western blot analyses (B), MTS assay or trypan blue exclusion assay for cell viability (C-D) and FACS analyses for subG1 cell population (E). The data are presented as the mean ± SEM from three independent experiments (***P < 0.001; **P < 0.01). 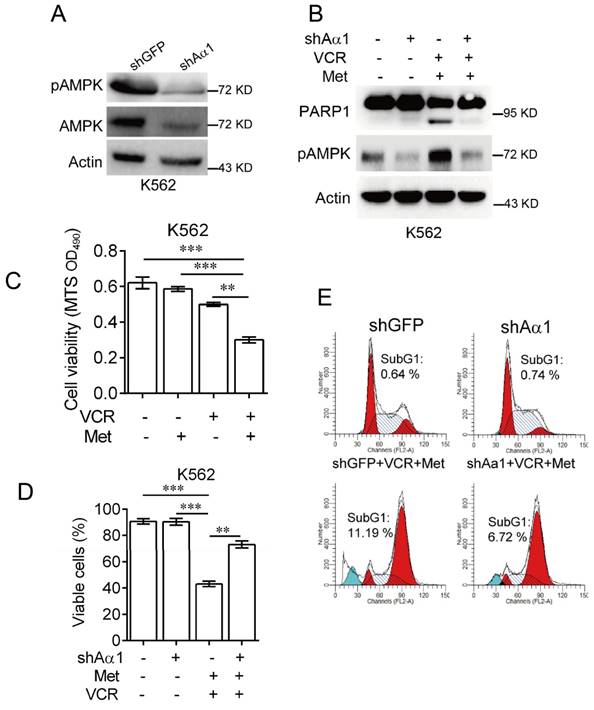 Energetic deregulation is an important hallmark of cancer. AMPK, a cellular energy sensor activated by metabolic stresses, has been shown as a potential target for cancer prevention and/or treatment since AMPK activation leads to inhibition of cell growth and survival. Indeed, AMPK is implicated in regulation of leukemia cell growth, apoptosis and autophagy [24, 29]. Several studies have shown that AMPK is regulated at post translational modification, For instance, AMPK activity is inhibited by AKT-mediated phosphorylation at AMPKα1 serine 485 [30, 31]. In this study, we found that not only phosphorylation of AMPK, but also AMPKα1 mRNA levels are significantly decreased in T-cell/B-cell acute lymphoblastic leukemia. However, the major causes that lead to the decrease of AMPKα1 mRNA levels are unknown, which deserves further investigation. Notably, knockout of AMPKα1 dramatically decreases mice survival in c-myc-driven lymphoma [32]. It would be interesting to investigate whether knockdown of AMPKα1 impacts leukemia development.

Vincristine binds specifically to tubulin, which leads to microtubule depolymerization, cell cycle arrest and apoptosis in mitotic cells [2]. However, long-term use of vincristine can lead to chemo-resistance. It is reported that metformin can enhance chemotherapeutic drugs, such as cisplatin and doxorubicin, to induce apoptosis in breast cancer, lung cancer and prostate cancer [13-15]. In this study, we demonstrate that metformin significantly sensitizes leukemia cell to vincristine-induced apoptosis, which may be the first to show that combination of metformin and vincristine synergistically inhibits leukemia cell viability.

Our data indicates that phosphorylated AMPK and AMPKα1 mRNA levels are dramatically decreased in clinical leukemia cells, which might play a role in drug-resistance in leukemia. Notably, It is shown that inhibition of AMPK by compound C or expression of AMPKα siRNA dramatically inhibits vincristine-induced apoptosis in melanoma cells [28]. Thus, it is plausible that AMPK inactivation contributes to leukemia cell resistance to vincristine.

Together, in this study, we demonstrate that metformin sensitizes leukemia cells to vincristine-induced apoptosis and suggest that combination of metformin and vincristine maybe a new therapeutic strategy for treating leukemia.

We thank Drs. Qintong Li and Chenhua Li for helpful discussions. This work was supported in part by National Natural Science Foundation of China [81330054 and 81520108020] and by Science and Technology Department of Sichuan Province [2014SZ20116].