Impact of Detection Method and Accompanying Ductal Carcinoma in Situ on Prognosis of T1a,bN0 Breast Cancer

Background: T1a,bN0 breast cancer is not easily detected. Before mammography became widespread, most cases were discovered only after the development of symptoms. The presence of ductal carcinoma in situ (DCIS) affects the detectability of associated invasive cancer; however, the prognostic value of concomitant DCIS is controversial. This study compared the characteristics of screening-detected and symptom-detected T1a,bN0 breast cancer, and investigated the impact of accompanying DCIS on detection and prognosis.

Patients and Methods: Data were collected from a single hospital between 2000 and 2009. Of 5,690 primary breast cancers patients, 438 met the criteria for T1a,bN0M0. Logistic regression models were used to identify prognostic indicators and their association with the detection method. Survival analyses were performed to estimate distant relapse-free survival (DRFS) and breast cancer-specific survival (BCSS).

The characterization and survival of patients with stage T1a,bN0 breast cancer have garnered increased attention in recent years; several reports have been published on the prognoses and treatment outcomes of this disease. However, the reported prognoses for T1a,bN0 breast cancer vary widely, partly because studies employ different outcome measurements. In a review of the literature, Hanrahan et al. found that the 10-year distant relapse-free survival rate (DRFS) was above 98% in some studies, but only 80% in others [1]. Additionally, most studies evaluated in Hanrahan et al.'s review were performed prior to 1990, before breast cancer screening programs began in many countries. Survival estimates in these studies were likely to be biased, as most T1a,bN0 breast cancer cases today are detected through screening.

The detection of sub-centimeter breast tumors is challenging; before the prevalence of mammography screening, most cases were discovered because of an accompanying symptom. It has been suggested that the presence of ductal carcinoma in situ (DCIS) affects the detectability of associated invasive cancer [8]. In a study by Chagpar et al., more than one-quarter of patients with invasive carcinoma had concomitant DCIS [9]. The effect of accompanying DCIS on detectability is even more pronounced when the invasive tumor is small. In studies of T1a,bN0 breast cancer, large DCIS lesions have usually been found adjacent to invasive tumors, especially those that are HER2-positive [10, 11]. In another study of triple-negative T1a,bN0 breast cancer, 83% of the invasive cancers were associated with DCIS [12].

The prognostic impact of DCIS lesions that accompany invasive tumors is controversial. In one study, accompanying DCIS was found to predict improved local recurrence-free survival in breast cancer patients [13]; however, other studies have shown that, while the presence of concomitant DCIS is associated with favorable features, the prognosis is not altered [8, 9].

The present study investigated the differences in characteristics between screening-detected and symptom-detected patients, as well as the impact of accompanying DCIS on detection and prognosis in T1a,bN0 breast cancer.

There were 5,690 women with invasive breast cancer treated between January 1, 2000 and December 31, 2009 identified in our databank. Patients were selected for our study based on 3 criteria: 1) invasive tumor size ≤0.5 cm (T1a) or >0.5 cm but ≤1.0 cm (T1b); 2) the patient completed axillary staging and was negative for lymph node metastasis; and 3) the statuses of estrogen receptor (ER), progesterone receptor (PR), and human epidermal growth factor receptor 2 (HER2) were known. Patients who received neoadjuvant therapy or had previous histories of breast malignancy or distant metastasis were excluded. Those who received adjuvant trastuzumab were also excluded because this agent was not recommended for T1a,bN0 breast cancer according to our treatment guidelines that were in effect during the study period, although it appears to have an impact on survival according to more recent evidence. Ultimately, 438 patients with T1a,bN0 breast cancer were included.

The following factors were retrieved from our database for analysis: age, invasive tumor size, size of accompanying DCIS, surgical method, Nottingham Bloom Richardson (NBR) grade, immunohistochemistry (IHC) staining of ER, PR, and HER2, and type of adjuvant therapy. The pathologic size of DCIS was divided into large (≥2 cm) or small (<2 cm) based on the studies by Nair and Lagios [14, 15]. Information on detection method was obtained by reviewing medical records, and cases were divided into 1) screening-detected, where the lesion was detected by either ultrasonography or mammography; and 2) symptomatic, where the tumor was discovered after experiencing a palpable mass, nipple discharge, pain, nipple morphology change, or other signs.

IHC staining of ER, PR, and HER2 was performed by a College of American Pathologists-certified unit at our pathology department. ER and PR were considered positive if ≥1% of tumor cells were stained; HER2 was defined as positive if more than 30% of cancer cells showed strong complete membrane staining by IHC, or if fluorescent in situ hybridization yielded a HER2/CEP17 ratio ≥2.2. Luminal A subtype was defined as ER/PR positive, HER2 negative, and NBR grade 1; Luminal B was defined as ER- and/or PR-positive without fulfilling other Luminal A criteria. The HER2 subtype was negative for ER and PR and positive for the HER2 receptor. The triple negative subtype was negative for ER, PR, and HER2. Adjuvant treatment was recommended according to our treatment guidelines, which have since undergone periodic revisions. Data on adjuvant therapy (including radiation, chemotherapy, and hormonal therapy) were collected.

We used distant relapse-free survival (DRFS) as the primary endpoint in this study because it corresponded to breast cancer-specific survival (BCSS) and is the foremost indicator when considering adjuvant therapy; the secondary endpoint was BCSS. This study was reviewed and approved by the Ethical Committee of our institution (104-4699B); the review board waived the requirement for written informed consent for all patients.

The chi-square test was used to determine differences in categorical predictor variables between patients with T1aN0 and T1bN0 breast cancer and between screening-detected and symptomatic T1a,bN0 breast cancer; a Mann-Whitney U test was utilized for continuous predictor variables. Multivariate statistics were used to determine the independent effects of predictor variables on both DRFS and BCSS. DRFS was defined as the time from surgery to distant relapse; BCSS was defined as the time from surgery to death due to breast cancer. We first performed stepwise logistic regression analysis to estimate the associations between prognostic variables and detection methods (symptomatic vs. screening). Survival analysis was performed using the Kaplan-Meier method; survival curves were compared by using a log-rank test where p<0.05 was considered statistically significant. All statistical tests were 2-sided. All analyses were performed with the SPSS software (version 16; SPSS, Inc., Chicago, IL).

Among the 438 cases of T1a,bN0 breast cancer in the study, 164 were T1a and 274 were T1b tumors. Significant differences were noted between T1aN0 and T1bN0 cases (Table 1). Patients with T1aN0 were more likely to have aggressive features such as higher grade (p=0.031), a higher prevalence of ER- or PR-negative status (p<0.0001 and p=0.003, respectively), and a larger proportion of HER2-positive patients (p<0.0001). Additionally, the sizes of accompanying DCIS lesions tended to be larger than in patients with T1bN0 tumors (2.4 cm vs. 0.3 cm, respectively; p<0.0001); T1aN0 tumors were also more frequently accompanied by large (≥2 cm) DCIS lesions (p<0.0001). A higher proportion of T1aN0 patients had received a mastectomy; conversely, adjuvant chemotherapy, hormonal therapy, and radiotherapy were administered more often to T1bN0 patients.

Differences in characteristics of patients with T1a,bN0 breast cancer by detection method

Thirty-eight recurrences were observed after a median follow-up period of 72.9 months, 19 of them distant, and 10 deaths were observed. This corresponded to an overall estimated DRFS rate of 96.9% at 5 years and 92.4% at 10 years. The estimated 5-year and 10-year BCSS rates were 98.4% and 97.5%, respectively. Univariate analysis showed that symptomatic tumors, large accompanying DCIS lesions, and HER2 positivity were significantly associated with worse DRFS. Tumors accompanied by large DCIS and those that were ER-negative, PR-negative, and HER2-positive resulted in significantly worse BCSS (Table 4).

In this study, we compared the characteristics and survival rates between symptomatic- and screening-detected T1a,bN0 breast cancer patients, and found that patients who presented with symptoms were more likely to have large DCIS; this was the only risk factor for distant relapse and worse BCSS.

Univariate analysis of survival in patients with T1a,bN0 breast cancer 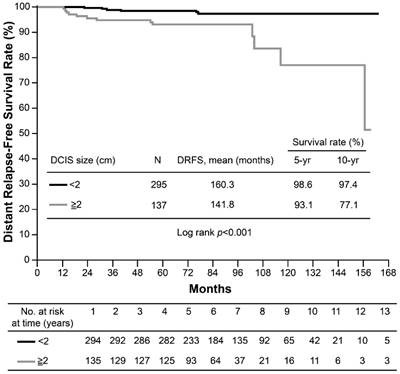 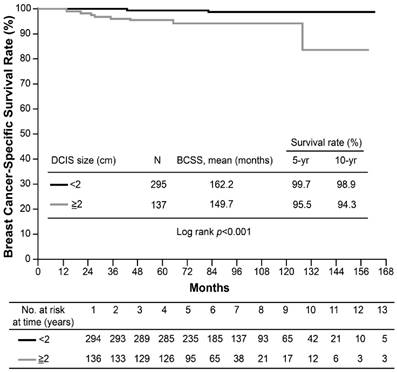 The prognosis of DCIS is excellent in general; however, factors such as higher tumor grade, African American ethnicity, comedo necrosis, aggressive biologic subtypes, or presentation with symptoms have all been found to be associated with poorer survival [21-23]. Younger age at diagnosis is also an adverse prognostic factor for DCIS outcomes. It is likely that younger patients rarely undergo screening, and that their cancers are usually detected through symptoms [24]. The prognostic role of the detection method has also been reported in studies of DCIS. In a study of pure DCIS with no adjuvant therapy, DCIS detected by palpation was a risk factor for invasive recurrence [25]. In another study of DCIS by Lagios et al., all of their cases that developed local recurrence or distant metastasis had large DCIS lesions [15]. More recently, an analysis of >100,000 women with DCIS from the Surveillance, Epidemiology, and End Results (SEER) database revealed that larger DCIS lesions were found to be associated with worse BCSS rates [26].

There has been little evidence regarding the prognostic significance of associated DCIS in breast cancer. Fehrenbacher et al. noted that several patients in their study of HER2-positive T1a,bN0 breast cancer had large, high-grade DCIS lesions adjacent to small HER2-positive tumors [10]. More recently, Tot reported that the vast majority of the T1a,b HER2-positive breast cancers in his study had a high grade, were diffuse, and had extensive in situ components [11]. However, survival analysis regarding the impact of large associated DCIS lesions was not performed in either of these studies.

Our study has a few limitations. First, our screening-detected group was small (18% of the cohort), partly because the nationwide mammographic screening program in Taiwan did not commence until 2004. Most women in Taiwan were not routinely screened during our study period of 2000-2009; the 2-year screening rate was only 12% in 2008 [28].

Second, although the median follow-up time is relatively long in our study (approximately 73 months), neither distant recurrence nor death occurred in the screening-detected subgroup. Quiet et al. cautioned on the importance of long-term follow-up in patients with small tumors, which are likely to have a delayed effect on DRFS and OS [29]. Findings consistent with this notion were observed in a recently published study by Houvenaeghel et al. on outcomes of T1 breast cancer, where the recurrence rate was only 6% at 5 years but 16.2% at 10 years [30]. To better estimate the rates of recurrence and death, future research is warranted to collect longitudinal representative data for longer than 10 years, especially from screening-detected patients.

This research did not receive any specific grant from funding agencies in the public, commercial, or not-for-profit sectors.