Pattern of distant extrahepatic metastases in primary liver cancer: a SEER based study

Methods: Based on the Surveillance, Epidemiology and End Results (SEER) database, eligible patients diagnosed with primary liver cancer was identified between 2010 to 2012. We adopted Chi-square test to compared metastasis distribution among different histological types. We compared survival difference of patients with different extrahepatic metastasises by Kaplan-Meier analysis. Cox proportional hazard models were performed to identify other prognostic factors of overall survival.

Results: We finally identified 8677 patients who were diagnosed with primary liver cancer from 2010 to 2012 and 1775 patients were in distant metastasis stages. Intrahepatic cholangiocarcinoma was more invasive and had a higher percentage of metastasis compared with hepatocellular carcinoma. Lung was the most common metastasis and brain was the least common site for both hepatocellular carcinoma and intrahepatic cholangiocarcinoma. Extrahepatic metastasis could consider as an independent prognostic factor for patients with liver cancer. Patients with brain metastasis had the worst prognosis, compared with other metastasis in overall survival (OS) and cancer-specific survival (CSS) analysis.

Conclusions: Different histological subtypes of liver cancer had different metastasis patterns. There were profound differences in risk of mortality among distant extrahepatic metastatic sites. Results from our studies would provide some information for follow-up strategies and future studies.

Primary Liver cancer is the sixth common cancer globally, after cancers of the lung, breast, colorectal, prostate and gastric1. However, the extremely poor prognosis for primary liver cancer makes it the second leading cause of cancer-related death globally (745,000 deaths, 9.1% of the total death)2. Despite the prevalence of liver cancer is more frequent in developing country, it is still a significant health burden in many parts of the developed regions, including North America and central Europe3-5. In contrast to stable or declining trends of other cancers in US (such as lung, breast, and colorectal cancers), the incidence and death rates of primary liver cancer increased rapidly among men and women in recent decades6. Unlike hepatitis B viral infection as the predisposing factor for liver cancer in Asian, the increasing incidence in American is largely attributed to infection of chronic hepatitis C virus (HCV)7. Other predominant risk factors included alcohol abuse, non-alcoholic fatty liver diseases (NAFLD), aflatoxin B1 exposure and diabetes mellitus8, 9. Histologically, the majority of liver cancer is either hepatocellular carcinoma (HCC) or intrahepatic cholangiocarcinoma (ICC), while combined hepatocellular carcinoma and cholangiocarcinoma is less common10. Currently, potentially curative therapies for liver cancer include liver transplantation, hepatic resection and radiofrequency ablation. However, these modalities are not readily available to advanced patients11. Though these treatments have shown modest improvement in overall survival in early stage disease, the 5-year relative survival for distant metastasis patients is still low (3.1%). As we all know, primary liver cancer preferentially metastasize to the portal vein and extrahepatic metastasis including lungs, bones, brain, lymph nodes, and adrenal glands12-14. Thus far, few detailed studies explored extrahepatic metastasis profiles due to rare data of liver cancer metastasis. Patterns of extrahepatic metastasis still need further clarification. Besides, it is unclear whether different metastatic sites would be translated into distinct clinical outcomes. Thus, it is crucial to elucidate the metastatic distribution for better treatments and survival benefits. Therefore, in the present study we retrospectively reviewed data from SEER population-based cancer registry, in an attempt to explore metastasis profiles of primary liver cancer. Furthermore, we analysed the clinical characteristics and prognosis according to their distinct metastatic sites. We sought to explore clinical and demographic differences among patients with primary liver cancer. 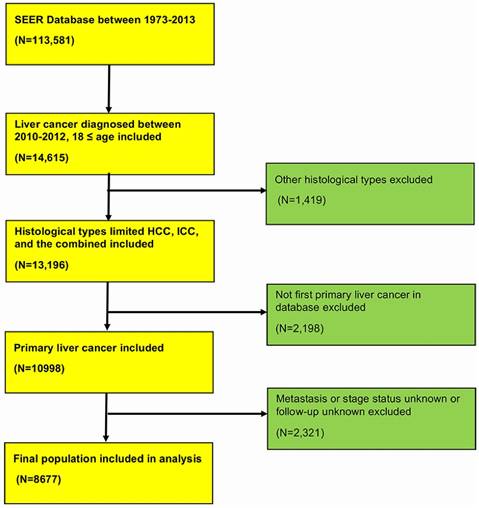 The Surveillance, Epidemiology, and End Results (SEER) Program is the largest publicly available cancer dataset and is maintained by the National Cancer Institute. The SEER population-based cancer registries contain information from various locations and sources throughout the United States, which represents approximately 28% of the U.S. population. Data was based on Incidence-SEER 18 Regs Research Data + Hurricane Katrina Impacted Louisiana Cases, Nov 2015 Sub (1973-2013 varying). The detailed population selection procedure was summarized in Figure 1. Briefly, we included patients aged ≥18 years with diagnosis of primary liver cancer between 2010 and 2012 identified from the SEER database. We excluded patients whose metastasis status and follow-up information was unknown. We performed a retrospective cohort study through the SEER database to identify the distant metastasis pattern of primary liver cancer. This database only includes metastasis to the bone, brain, liver, lung and distant lymph nodes at the time of diagnosis since 2010. The study was approved by the review board of the First Affiliated Hospital, School of Medicine, Zhejiang University, Zhejiang, China.

From SEER database, we finally identified 8,677 patients who were diagnosed with primary liver cancer from 2010 to 2012. The detailed selection procedure of population was displayed in Figure 1. Primary liver cancer included 7681 hepatocellular carcinomas (88.5%), 986 intrahepatic cholangiocarcinoma (11.4%), 10 combined hepatocellular carcinoma and intrahepatic cholangiocarcinoma (0.1%). Baseline clinical characteristics of patients were presented in Table 1. As shown in Table 1, there were no significant differences of age, marital status, gender between metastasis and non-metastasis patients. Although intrahepatic cholangiocarcinoma consists a small part of liver cancer, ICC tended to be more likely to distant metastasis compared with HCC (36.4% vs. 18.4%, P < 0.01). Patients with advanced stages received less surgery and more radiation therapy.

Among 8677 patients, there were 1775 patients at distant metastasis stages (20.5%) when they were diagnosed. Since the SEER only included metastatic site information related to lung, liver, bone, distant lymph and brain at the time of diagnosis, we focused on extrahepatic sites (lung, bone, distant lymph and brain) in further study. Detailed clinical features of extrahepatic metastatic patients were presented in Supplementary Table 1. The four extrahepatic metastatic sites accounted for 73.2% (1300/1775) of all advanced cases at the time of diagnosis. Lung was the most common metastatic site and brain was least common site, accounting for 36.2% (642/1775) and 1.9% (34/1775), respectively.

Distant metastasis pattern and combination of metastasis according to histology

HCC and ICC were different in clinical features, therefore we analysed metastasis patterns according to histological subtypes. Since limited cases of combined HCC and ICC, we did not include this type for our analysis. The detailed clinical information of population with different histological subtypes was shown in Supplementary Table 2. For both HCC and ICC patients, lung and brain were still the most and least frequent extrahepatic metastatic sites, separately (Figure 2). However, several differences in extrahepatic metastatic patterns were existed between histological subtypes. Percentage of lung metastasis (38.4% vs. 27.6%, P < 0.05), bone metastasis (32.6% vs. 18.9%, P < 0.05), and distant lymph (24.6% VS 11.4%, P < 0.05) were higher in HCC patients while there was no difference among incidence rate of brain metastasis between HCC and ICC (Figure 2). 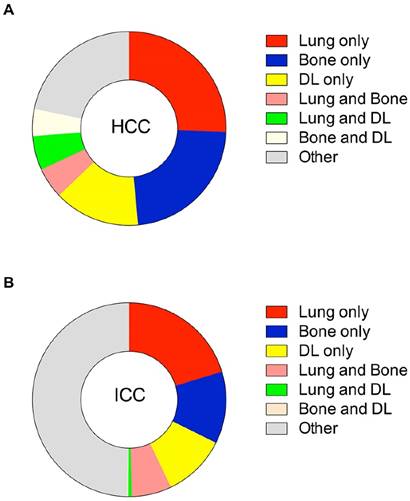 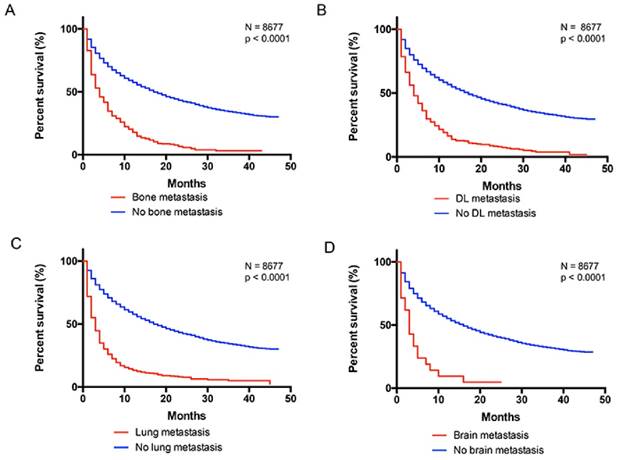 According to previous studies, race, gender, marital status-related discrepancies in prognosis of various cancer had been demonstrated. Therefore, we performed further analysis to examine whether these variables have different effects on association between metastatic status and survival rate. On multivariate overall survival analysis, the Black were found to have a significantly worst prognosis, compared with other racial groups (HR,1.39,95%1.14-1.71). Female who were under metastatic status have higher risk of mortality compared with male (HR,1.27,95%1.08-1.49). Regarding marital status, married patients have better survival than the unmarried (HR,1.37,95%1.21-1.55). Similar results were found in cancer-specific survival analysis.

In the present study, we found that lung was the most common extrahepatic site for both HCC and ICC, followed by bone, distant lymph and brain. The main metastatic site of ICC is liver, whereas HCC was significantly more frequent to develop lung and bone metastasis than ICC. This suggested that we should pay more attention to extrahepatic metastasis of HCC patients. Furthermore, we analysed the survival rate and found that race, gender, age, marital status, histology, grade, and therapies were all significantly associated with OS. Besides, different extrahepatic metastatic sites also influenced overall and cancer-specific mortality. Sufficient treatments of both surgery and radiation therapies may improve prognosis even in advanced stage patients19, 20. Survival rate for patient with brain metastasis was worse than patients with bone metastasis. Hence, the presence of brain metastasis was an indicator of poor survival for primary liver cancer, although it was rare. Understanding of different extrahepatic metastatic sites was important for clinicians to adopt appropriate treatment choices. Furthermore, we observed that the Black, female, and unmarried patients had higher risk of mortality. Our study confirmed the association between biologic impacts with variables on prognosis of liver cancer, although the details are remains unclear).

The authors acknowledge the efforts of the SEER Program cancer registries in the creation of the SEER database.