METHODS: We established patient-derived tumor cells (PDCs) from metastatic lesions that newly appeared during treatment with a BRAF inhibitor (LGX-818) plus an EGFR inhibitor (cetuximab) in a patient with BRAF-mutant CRC. To investigate therapeutic options to overcome acquired resistance due to MAP2K1 mutation in BRAF-mutant CRC, we performed cell viability assays using the PDCs.

RESULTS: We tested whether the PDCs were resistant to an EGFR inhibitor (cetuximab) and a BRAF inhibitor (sorafenib) as these cells were established at the time of resistance to the EGFR plus BRAF inhibitors. Moreover, the anti-tumor effect of AZD6244 (MEK inhibitor) was evaluated because PDCs harbored a MAP2K1 mutation at the time of resistance to the EGFR plus BRAF inhibitors. MTT proliferation assays showed that monotherapy with cetuximab, sorafenib, or AZD6244 did not suppress cell viability. We next tested viability of the PDCs to combination treatment with cetuximab plus AZD6244 and sorafenib plus AZD6244. Proliferation of PDCs was significantly inhibited by sorafenib and AZD6244, but not by cetuximab plus AZD6244. Investigation of the combined effect of sorafenib and AZD6244 using the calculated combination index (CI) showed synergistic effects of sorafenib and AZD6244 in combination therapy applied to PDCs with the MAP2K1 K57T mutation.

CONCLUSION: Our results suggest that combination treatment with BRAF and MEK inhibitors might be a novel treatment strategy for MAP2K1 K57T-mutant CRC. This finding will be helpful to guide treatment of patients with CRC that is resistant to EGFR inhibitors.

An improved understanding of the underlying molecular pathology of colorectal cancer (CRC) has enabled tailored treatment regimens and helped to optimize outcomes. There have been recent and rapid advances in the development of agents targeting components of receptor tyrosine kinase signaling cascades for use in cancer therapy [1-3].

As many human cancers, including CRC, are associated with abnormal expression of epidermal growth factor receptor (EGFR), which is implicated in the development and prognosis of malignancy, EGFR is a potential target for cancer therapy [4]. However, benefit from anti-EGFR therapy using cetuximab and panitumumab was observed in only a selected subset of patients (10-20%), highlighting a distinct need for individualized treatment [5-8]. RAS/RAF/MAPK signaling is considered the key modulator of sensitivity and resistance to anti-EGFR therapy in CRC [9-13]. BRAF mutations are present in approximately 8% to 10% of patients with metastatic CRC and are associated with poor survival [10, 14]. BRAF encodes a protein directly downstream from RAS in the RAS/RAF/MAPK signaling pathway. Patients with metastatic BRAF-mutated CRC do not benefit from anti-EGFR antibodies in the chemotherapy refractory setting [15]. In BRAF-mutant CRC, blockade of BRAF generates a reflexive EGFR activation, which can bypass BRAF and promote tumor progression through MAPK signaling [16, 17]. Preclinical and early clinical studies reported that treatment strategies co-targeting BRAF and EGFR can suppress feedback reactivation of MAPK signaling, leading to more robust signaling and improved efficacy in BRAF-mutant CRC [16, 18, 19]. However, despite the value of combination therapy with BRAF and EGFR inhibitors in BRAF-mutant CRC, patients who derive initial benefit from treatment ultimately experience disease progression due to acquired resistance [20, 21].

Mitogen activated protein kinase 1 (MAP2K1), also called MEK1, is a protein kinase that is a known downstream target of RAF and is upstream of ERK [22]. Mutations of MAP2K1 are present in 1.5% of CRCs and most mutations cause constitutive activation of MAP2K1 kinase [23, 24]. MAP2K1 mutations also participate in the mechanisms of acquired resistance to combination treatment with BRAF and EGFR inhibitors [25].

We established patient-derived cells (PDC) from a BRAF-mutant CRC tumor that had acquired a MAP2K1 mutation at the time of resistance to combination therapy with BRAF and EGFR inhibitors. We used these PDCs to investigate therapeutic options to overcome the acquired resistance to BRAF and EGFR inhibitors caused by the MAP2K1 mutation in BRAF-mutant CRC.

With informed consent, tumor samples were obtained from newly appeared hepatic metastatic lesions of a patient with BRAF-mutant metastatic CRC who had received combination treatment with BRAF (LGX-818) and EGFR inhibitors (Cetuximab). Collected tissue was minced and dissociated by enzymatic methods. The patient-derived cells (PDCs) from hepatic metastatic CRC were cultured in RPMI 1640 supplemented with 10% fetal bovine serum (FBS; Gibco BRL, Paisley, UK) and 1% antibiotic/antimycotic solution (Gibco BRL). The medium was changed every 3 days, and cells were maintained at 37°C in a humidified 5% CO2 incubator. PDCs were passaged using TrypLE Express (Gibco BRL) to detach cells when they reached 80-90% confluence.

After pathologic confirmation, cells were seeded at a density of 1-2 × 106 cells/10-mm dish for immunoblot analysis or 5,000 cells/well in 96-well plates for cell proliferation assays and treated for 3-5 days with various concentrations of drugs as indicated. Inhibition of cell proliferation was determined using Cell Titer Glo (Promega, Madison, WI, USA) according to the manufacturer's protocol. Interactions between drugs were presented as the combination index (CI), calculated by dividing the expected growth inhibition rate by the observed growth inhibition rate: CI <1.0 indicates antagonistic cytotoxicity; CI=1.0 is additive cytotoxicity; and CI >1.0 is synergistic cytotoxicity.

A 45-year-old man initially presented in 2013 with stage IV, KRAS wild type and BRAF mutant rectosigmoid colon cancer. He underwent lower anterior resection for the primary lesion and hepatic sectionectomy for a metastatic liver lesion. Recurrence with hepatic and intra-abdominal lymph node metastases occurred after eight cycles of postoperative XELOX (capecitabine and oxaliplatin) chemotherapy. At the time of recurrence he was enrolled in a clinical trial of combination therapy with BRAF (LGX-818) and EGFR inhibitors (cetuximab) for BRAF-mutant CRC. The combination treatment with LGX-818 and cetuximab initially stabilized the disease; however, a computed tomography (CT) scan 3.5 months after treatment showed newly appeared hepatic metastasis and aggravation of the pre-existing hepatic lesion. At this time, core biopsy from the newly appeared hepatic lesion was performed and after tumor confirmation we generated PDCs from the patient. The biopsied tumor sample was analyzed by target sequencing and the tumor was found to harbor the BRAF V6003 and MAP2K1 K57T mutations. Genomic profiling of previous surgical samples taken at the time of diagnosis using targeted sequencing did not show the MAP2K1 K57T mutation. We also confirmed the MAP2K1 K57T mutation in PDCs by ddPCR.

The combination effect of Sorafenib and AZD6244.

Anti-proliferation assay in K57T mutated PDC. A) Cells were exposed to indicated drug in increasing dose for 3 days. The effects were determined using Cell Titer glo method according to the manufacturer's manual. B) The table represents the genetic feature of PDC and sensitivity to Cetuximab, Sorafenib and AZD6244 alone or combination. 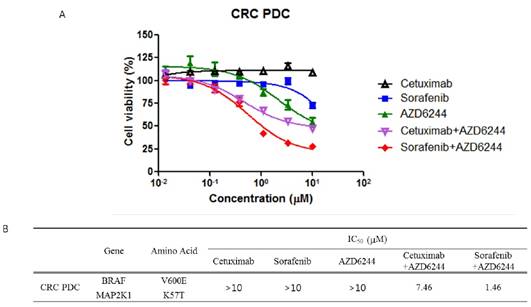 The effect of Sorafenib and AZD6244 combination. 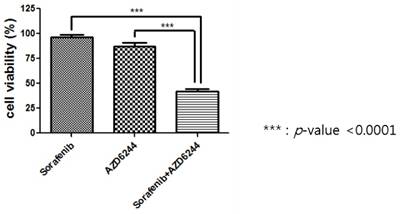 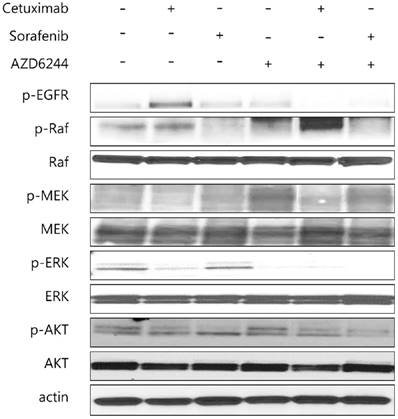 To investigate therapeutic options to overcome the acquired resistance associated with the MAP2K1 mutation in BRAF-mutant CRC that is resistant to combination treatment with BRAF and EGFR inhibitors, we performed a cell viability assay using the MAP2K1- and BRAF-mutant CRC PDC line. We tested whether the PDCs were resistant to EGFR (cetuximab) and BRAF inhibitors (sorafenib) as these cells were established at the time of tumor resistance to EGFR plus BRAF inhibitors. Moreover, the antitumor effect of AZD6244 (MEK inhibitor) was evaluated because the PDCs harbored a MAP2K1 mutation at the time of resistance to EGFR plus BRAF inhibitors. MTT proliferation assays showed that cetuximab, sorafenib, and AZD6244 monotherapies did not suppress cell viability.

The progressive lesion in our patient that newly appeared after combination therapy with the EGFR inhibitor (cetuximab) plus a RAF (LGX-818) inhibitor was biopsied and analyzed by targeted sequencing. The post-EGFR/RAF therapy progression sample retained the original BRAF V600E mutation and harbored a new MAP2K1 K57T mutation compared with the pre-EGFR/RAF therapy tumor sample. The MAP2K1 mutation is known to be one of the potential candidates for primary and/or secondary resistance to EGFR inhibitors in CRC [25-27]. Also, alterations in the MAPK signaling pathway are important drivers of acquired resistance in BRAF-mutant cancer. MAP2K1 is a component of the oncogenic RAS-MAPK pathway [13, 28] and MAP2K1 mutations that activate this pathway have been observed in melanoma, CRC, gastric cancer, Langerhans cell histiocytosis, and hairy cell leukemia [29-31]. MAP2K1 mutation was associated the resistance of EGFR inhibitor of ALK inhibitor in non-small cell lung cancer [32,33]. Previous studies reported that MAP2K1 mutations in cancer cells led to downstream ERK phosphorylation and increased colony formation that was inhibited with the MEK inhibitor AZD6244 [34]. In this study, established MAP2K1-mutant PDCs were insensitive to AZD 6244 alone, inconsistent with findings from previous studies. This discrepancy may be caused by co-existing genomic alterations. The PDCs used in this study originated from a BRAF V600E and MAP2K1 K57T mutant tumor sample. The BRAF V600E mutation would affect the findings for cytotoxicity of AZD6244 alone.

Accurate prediction of anti-tumor effects of molecularly targeted agents before clinical trial design and implementation in cancer patients is essential to realize the goal of precision medicine. Ideal preclinical models should closely resemble the actual tumors in terms of genomic profiles and drug response. Recently, patient-derived tumor cells have been suggested as an alternative preclinical model for use as a prediction system for preclinical drug testing [35]. Our group previously demonstrated the usefulness of our PDC system as a promising model for preclinical experiments in various cancer types including CRC [36]. In the present study, we successfully established PDCs from a metastatic lesion that newly appeared in a patient with BRAF-mutant CRC during treatment with BRAF (LGX-818) plus EGFR inhibitors (cetuximab). Although MAP2K1 K57T-mutant CRC is very rare, it is important to establish a precise treatment strategy based on the genomic profile and to study mechanisms for overcoming resistance to EGFR inhibitors. From this perspective, our successfully established PDCs from a patient with BRAF V600E and MAP2K1 K57T mutant CRC that was resistant to combination treatment with BRAF and MEK inhibitors could be considered important preparation for preclinical research.

Although generalization of our results is limited because they are based on a single case, this study suggests that the combination of BRAF and MEK inhibitors might be a novel treatment strategy for MAP2K1 K57T-mutant CRC. Furthermore, in terms of the MAP2K1 K57T mutation, which has been linked to mechanisms of primary and secondary resistance to EGFR inhibitor in metastatic CRC, our findings might guide the treatment of patients with CRC that is resistant to EGFR inhibitors.

5. Bokemeyer C, Bondarenko I, Makhson A. et al. Fluorouracil, leucovorin, and oxaliplatin with and without cetuximab in the first-line treatment of metastatic colorectal cancer. J Clin Oncol. 2009;27:663-671