Colorectal cancer (CRC) is one of the most leading causes of cancer-related death worldwide. The serum and glucocorticoid inducible kinase SGK1 is highly expressed and involved in several tumors. GSK650394, a SGK1 inhibitor, has been proved to be effective in impeding tumor growth in vitro. In this study, we developed a novel analog of GSK650394, and evaluated its effects on CRC cells and tumor growth both in vitro and in vivo. HCT116 cells were treated with a concentration gradient of new developed compounds and cholecystokinin octapeptide (CCK-8) assay was used to calculate the IC50 value of every analog. Cell proliferation analysis was estimated from EdU staining and flow cytometry in vitro, and immunohistochemistry of Ki67 and PCNA in vivo. Cell migration analysis was examined using the transwell assay. In vivo tumor growth was determined in athymic nude mice by injecting the HCT116 cells in the subcutaneous tissue, followed by the injection of QGY-5-114-A. We found that new developed GSK650394 analog QGY-5-114-A has lower IC50 value, and treatment with QGY-5-114-A significantly inhibited CRC cell proliferation and migration in vitro. Besides that, colonic tumor growth was also dramatically restricted by QGY-5-114-A in vivo. In conclusion, pharmacological treatment with QGY-5-114-A impedes CRC tumor cell proliferation, migration and tumor growth.

Colorectal cancer (CRC) is the most frequently diagnosed cancer, and remains the leading cause of cancer-related death worldwide [1]. The cause of CRC is very complex and diverse, including multiple factors such as diet, genetic predisposition, lifestyle, environmental factors and the presence of long-standing inflammatory bowel diseases [2-4]. Multiple systems and pathways are involved in colorectal carcinogenesis and contribute to the tumor initiation and development. Abnormal DNA methylation, chromosomal instability pathway, inflammation, microRNA, DNA Mismatch Repair (MMR) system and consequential microsatellite instability (MSI) have been reported to be responsible for CRC [5-9]. Various therapeutic agents targeting the above-mentioned pathways have resulted in a significant reduction of mortality in early stage CRC. However, the morbidity and mortality remain high in patients with advanced stage disease [10]. Thus, the optimization of clinical treatment and the investigation of novel molecular-targeted therapeutics for CRC are critically needed.

In this study, we designed and synthesized 39 new analogs of SGK1 inhibitor GSK650394. And one of these compounds named as QGY-5-114-A was more effective than GSK650394 in vitro and in vivo against colonic tumor cells. Therefore, the present study develops a new competitive inhibitor of SGK1, which is likely to have therapeutic utility in CRC.

Cell viability was detected using the cholecystokinin octapeptide (CCK-8) assay (Bioworld). After 6-8 h starvation, HCT116 cells were plated in 96 well plate at 2×105 cells/mL per well, and grown for 24 h. Then, cells were treated with various concentrations of compounds (0, 25, 50, 75, 100 and 200 μM) for 24 h, 1 hour before the end of the experiment, CCK-8 was added and incubated in 37 ºC blocking the light following the manufacturer's instructions. Then the cell proliferation inhibition was calculated by measuring the optical density values (OD) at 450 nm using microplate reader (Bio-Rad), the half maximal inhibitory concentration (IC50) value of every compound on HCT116 cells was calculated using SPSS software through probit model by logit-transformed.

Detection of compounds effect on HCT116 and HT29 cell proliferation was performed according to the manual of Cell-Light™ EdU Apollo®488 Cell Tracking Kit (Ribobio). Two hours before the end of cell treatment by compound, 50 μM EdU labeling medium was added to the cell culture to finish co-incubation. Afterwards, cells were washed with PBS and fixed with 4% paraformaldehyde overnight and neutralized with glycine for 5 min. After washed with PBS and 0.5% TritonX-100 for 10 min, anti-EdU working solution was added to stain at room temperature for 30 min. Subsequently, the DNA contents were stained with 5 μg/ml Hoechst 33342 for 30 min, and then observed under a fluorescent microscope (Leica Microsystems). The quantity of cell nuclear was calculated with Cell Profiler software.

The migration ability of HCT116 cells was examined in 6.5 mm transwell chambers with 8 μm pores (Costar). Briefly, 600 μl DMEM supplemented with 10% FBS was added to the bottom chamber. 200 μl resuspended cells (2×106/ml) treated with compound in serum-free DMEM were added to the top chamber. After migration for 48 h, cleaned cells upper surface of the membrane with a cotton swab and washed with PBS. Then the chamber was stained with crystal violet (Bioworld) for 5 min. The quantity of cells on the bottom of the membrane was performed under a microscope (Leica Microsystems).

Athymic nude mice aged 6 weeks were purchased from the Cavens lab (Changzhou, China). Under SPF conditions, the mice were bred in 12 h light/12 h dark cycle in an airy room at constant temperature about 21-23 °C. All animal experiments were conducted in accordance with institutional guidelines. Transplanted tumors were generated through implanting subcutaneously in 8-week old mice. HCT116 cells were suspended in 10% Matrigel and injected in the subcutaneous tissue of nude mice at a density of 3×106 cells/200 μL per mouse. After two weeks, compound (50 mM, 1:5 dilution, 40 μl) was injected around the subcutaneous every other day. Transplanted tumors were dissected after xenograft implantation 8 days, and then measured, fixed in 4% PFA and frozen in liquid nitrogen until use.

Tissues from the xenograft tumor were embedded in paraffin and sliced to 5-μm thickness. Tissue sections were maintained in a 65 °C incubator 2 h for drying. After dewaxing and dehydration, antigens were unmasked by pressure cooking for 10 min in citrate buffer according to antibody specification. Then sections were immersed in 0.3% hydrogen peroxide for 10 min to destruct the endogenous peroxidase activity. The next steps were performed avoiding exposing to light. 5% BSA used to block non-specific binding for 5 min, subsequently covered each slice with 50 μL primary antibodies against Ki67 (Abcam, 1:300, v/v, dilution), PCNA (Proteintech, 1:300, v/v, dilution), incubation overnight at 4 °C. Then covered with appropriate secondary antibodies for 1 h at room temperature and added each slice with fresh prepared 3,3-diaminobenzidine tetrahydrochloride (DAB) solution and hematoxylin counterstain. After staining, sections were dehydrated through increasing concentrations of ethanol and xylene. A total of 15 fields were randomly selected for each section in the viable region of the tumor under the microscope after mounted coverslip with neutral resin containing xylene.

All statistics of experiments were analyzed by GraphPad Prism 5.0 or SPSS20.0 software. All data were shown as mean ± SE. A Student's t test was performed to determine difference between the control and treated group. For all of the tests, P < 0.05 was considered statistically significant.

We first designed and synthesized new 39 analogs of SGK1 inhibitor GSK650394 (Fig. 1). We then preliminarily examined their inhibitory activities with CCK-8 assay. The results showed that those analogs, numbered as MH-1-11-A, MH1-11-B, QGY-5-90, QGY-OMe, QGY-5-163, QGY-5-114-A and QGY-5-121, could inhibit the cell viability in colonic tumor cell line HCT116 (Fig. 2A). To compare the inhibitory potency of these 7 analogs, we calculated their IC50 values by determining the concentration needed to inhibit half of the maximum cell viability of these compounds. Using CCK-8 assay, we showed that GSK650394 inhibited HCT116 cell viability with an IC50 value of 135.5 μM. And only compound QGY-5-114-A showed a significantly lower IC50 value of 122.9 μM, indicating the better inhibitory potency than commercial inhibitor GSK650394 (Fig. 2B and Table 1).

Several studies have showed that SGK1 regulates survival, proliferation, migration and invasion of cancer cells. In this study, we first evaluated the proliferation of HCT116 cells treated with QGY-5-114-A. The results showed that QGY-5-114-A inhibited HCT116 cell proliferation, revealed by a significant decrease in EdU staining (Fig. 3A). This conclusion was further confirmed by cell cycle analysis via flow cytometry (Fig. 3B).

The cell cycle distribution of HCT116 cells was affected by QGY-5-114-A, with a significant increase in G0/G1 population and a decrease in S phase cells. In order to investigate whether QGY-5-114-A could affect other colonic tumor cells, we also performed EdU staining and cell cycle analysis in HT29 cells. The same results were obtained (Fig. 4A and Fig. 4B). Taken together, our results revealed that QGY-5-114-A could suppress the proliferation of colonic tumor cells. 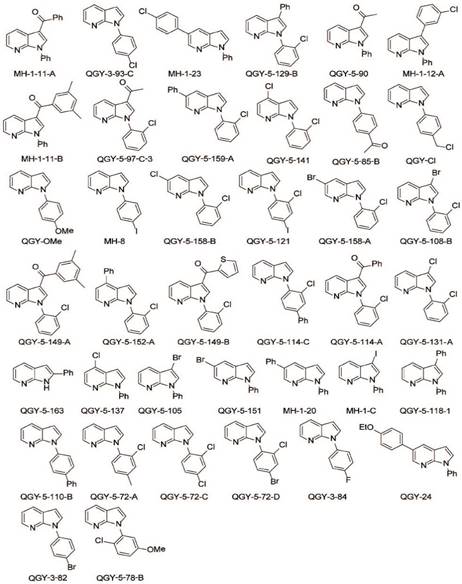 CRC is one of the most lethal malignancies, with the high rates of metastasis. To explore the biological functions of QGY-5-114-A in CRC migration ability, we first performed transwell migration assay in HCT116 cells. Cells treated with QGY-5-114-A displayed impaired migration (Fig. 5A), and the percentage of cells on the bottom of membrane was notably lower than control cells (Fig. 5B). These results indicated that QGY-5-114-A restrains CRC metastasis in vitro. 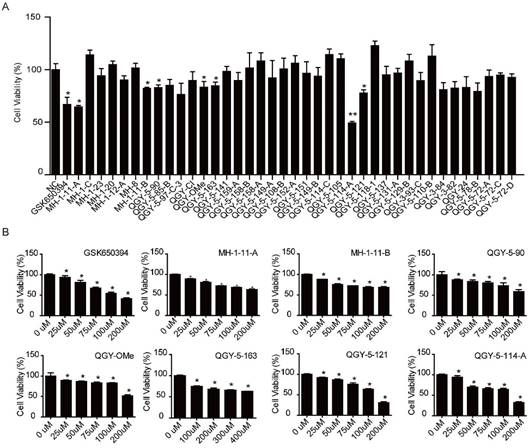 We explored the therapeutic effect of QGY-5-114-A on CRC growth by administering it into nude mice. CRC implant tumors were induced by subcutaneous injection of HCT116 cells, followed by treatment with the compound QGY-5-114-A (Fig. 6A). The results showed that QGY-5-114-A prominently reduced xenograft tumor size and volume until the mice were dissected on day 8 (Fig. 6B and 6C). In addition, we detected the xenograft tumor tissues by immunohistochemical analysis for proliferation markers including Ki67 and PCNA (Fig. 6D). In xenograft tumors treated with QGY-5-114-A, PCNA- and Ki67-positive cell populations were dramatically reduced. Collectively, these results suggest that QGY-5-114-A is impactful to depress the proliferation of CRC cells and tumor growth during the CRC development.

The present study describes the development of a novel compound, QGY-5-114-A, that was a new analog of SGK1 inhibitor GSK650394. We also examined the effects of QGY-5-114-A on CRC tumor cell proliferation, migration and tumor growth. GSK650394, a commercial inhibitor of SGK1, has previously been shown to antagonize SGK1 activity and inhibit prostate cancer cell growth [16]. Our results showed that, compared with GSK650394, this novel compound QGY-5-114-A has lower molecular weight, simpler chemical structure and lower IC50 value (Fig. 1, 2 and Table 1), indicating that QGY-5-114-A has a promising application prospect as SGK1 inhibitor.

The IC50 value of SGK650394 and new developed chemical compounds 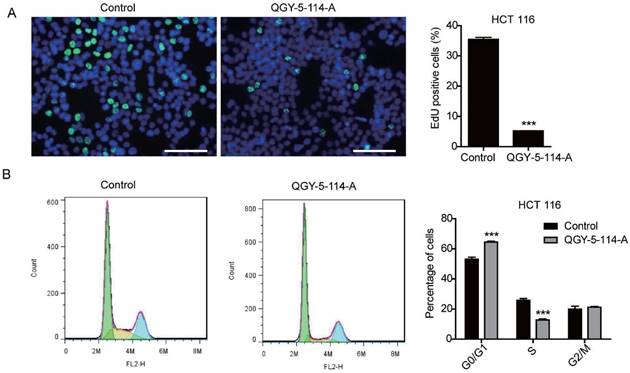 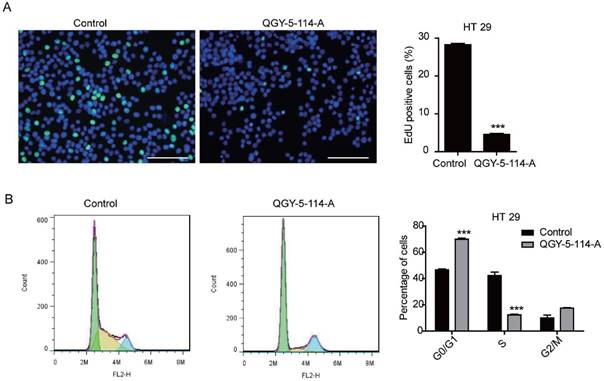 Previous studies reported that GSK650394 inhibits the enzymatic activity of both SGK1 and other members of the SGK protein family [16], and another SGK1 commercial inhibitor EMD638683 also inhibits the other two SGK1 isoforms with similar potency [18]. Therefore, extensive studies are needed to determine the specificity and effectiveness of QGY-5-114-A in inhibiting the enzymatic activity of SGK1.

The inhibition of colonic tumor growth by QGY-5-114-A is fully consistent with the previous reports that SGK1 mutation reduces spontaneous intestinal tumor number in APC-deficient mice [15] and SGK1 inhibition counteracts colonic tumor growth in vivo [17]. Several mechanisms, such as mTOR, FOXO3a, β-catenin, p53 and NF-kB, have been reported or predicted to be involved in SGK1-dependent tumor cell proliferation and tumor growth [19-25]. However, the explicit molecular mechanism of SGK1 in regulating colorectal cancer is still not clear. Accordingly, QGY-5-114-A will facilitate the identification of pathways regulated by SGK1 in CRC, which may develop more effective CRC treatments. Besides that, the identification and characterization of novel SGK1 antagonist by performing optimization on the basis of known compounds could be emulated by the identification of other small molecule inhibitors with ideal pharmacokinetic characteristics. 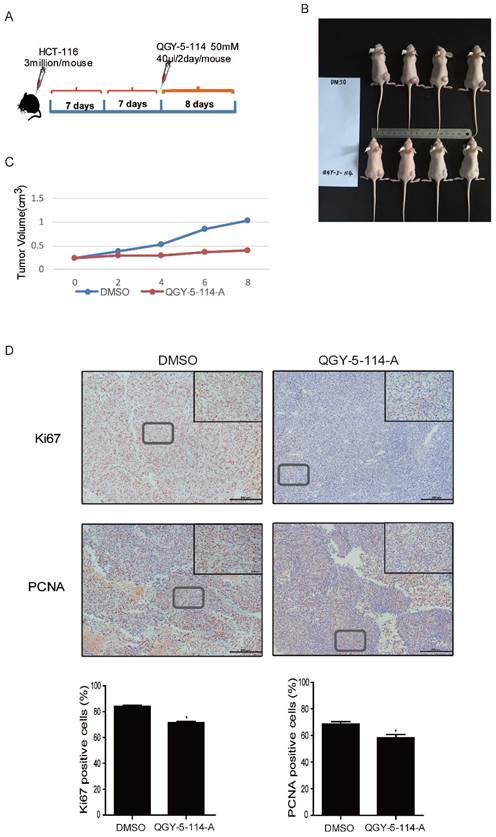 In conclusion, we developed 39 novel analogs of SGK1 inhibitor GSK650394 and one of them, QGY-5-114-A, has lower molecular weight and IC50 value. Treatment with QGY-5-114-A significantly restrains colonic tumor cell proliferation, migration and tumor growth, indicating QGY-5-114-A will be a promising therapeutic inhibitor in the treatment of CRC and other malignancies.

This work was supported by the grants from National Natural Science Foundation of China (81470515 to JH Xu and 21672136 to B Xu), Shanghai Medical Guide Project from Shanghai Science and Technology Committee (134119a3000 to JH Xu) and the development fund for Shanghai talents (to JJ Xiao).