Lissencephaly-1 (Lis1) protein, also known as platelet activating factor acetylhydrolase 1b regulatory subunit 1 (Pafah1b1), is a dynein-binding protein involved in neural stem cell division, morphogenesis and motility [1, 2]. Mutations or deletion of the gene encoding this protein may cause lissencephaly type I [3, 4]. Recent evidence shows a key role of Lis1 in cellular processes such as polarity establishment, fate determinants localization and mitotic spindle orientation by anchoring to the cellular cortex [5-7]. Data indicate that Lis1 is a major player in hematopoietic stem cells function, but also in leukemogenesis by regulating the asymmetric division and self-renewal of normal and malignant hematopoietic stem cells [8, 9]. Glioma stem cells represent a small subpopulation in glioblastoma that is of crucial importance in gliomagenesis, radio resistance, recurrences and survival [10-13]. One of the most known glioma stem cell marker is CD133 [14-17]. CD133 is not just a surface marker, but it is also involved in glioblastoma stem cell maintenance [18]. The working hypothesis of our paper is that Lis1 could play an important role in glioma stem cells function. To test our hypothesis, we evaluated Lis1 expression and function in CD133+ glioblastoma cells.

CD133 positive cells were isolated using CD133 MicroBead Kit (Miltenyi Biotec, AC-133/1), as previously described [13]. Briefly, control U87, shLis1-U87 and primary glioblastoma cultures, grown for five days in DMEM supplemented with 10% FBS or in SM, were detached using 33.3 µg/ml Liberase (Roche). The cells were counted, washed successively with DMEM and phosphate-buffered saline containing 0.5% bovine serum albumin (PBS-BSA) and passed through a 70 µm mesh filter. To the cell suspension, 20 µl FcR Blocking Reagent and then 20 µl CD133 MicroBeads were added. After 30 min incubation on ice, cells were washed in 2 ml PBS-BSA and centrifuged at 300 g for 10 min. Cells were resuspended in 500 µl PBS-BSA and applied onto the pre-equilibrated MS column, on the magnetic stand. After three washes with 500 µl PBS-BSA each, the column was removed from the magnetic field and the cells were collected in 1 ml PBS-BSA. Positive and negative CD133 cells were collected, counted and prepared for further analysis.

Lis1 gene expression was evaluated by Real-Time PCR in 36 glioblastoma samples (WHO grade IV glioma [19]) and in 5 normal samples obtained by open surgical procedures in 36 patients with glioblastoma operated in ''Bagdasar-Arseni'' Clinical Hospital, with written informed consent. Normal tissue samples were obtained when anterior temporal lobectomy was performed concomitant with tumor resection in 5 patients from the cohort with severe grand-mall temporal seizures, according to our institutional neurosurgical protocols. The research protocol was approved by the Ethics Committee of ''Bagdasar-Arseni'' Clinical Hospital in accordance with current national and European ethics legislation in medical research. The samples were homogenized using 0.5 mm diameter-zirconium beads in the homogenization solution of Maxwell® 16 LEV simplyRNA kit (Promega, Madison, WI) using a SpeedMill (Analytik-Jena, Germany), in two cycles of 30 sec each, with 30 sec cooling in between. After centrifugation (1 min at 5000 g), 200 μl supernatant were mixed with 200 μl lysis buffer, placed in the Maxwell 16 cartridge (Promega) and further processed according to the manufacturer's instruction. After reverse transcription, gene expression was analyzed by Real Time PCR using TaqMan Gene Expression Assays and specific probes Hs00181182_m1 (labelled with FAM) for Lys1 and Hs02758991_g1 (labelled with VIC) for GAPDH (for normalization), in a 7900HT Fast Real-Time PCR System (Applied Biosystems). Qiagility instrument (Qiagen) was used to pipet the 384 well PCR plates. The results were analyzed with DataAssist V3.01 Software (Applied Biosystems).

Lis1 immunodetection and colocalization with CD133 in human glioblastoma samples

Control U87 or shLis-U87 cells were X-ray irradiated with doses from 5 to 50 Gy (RS2000 apparatus, Rad Source Technologies, Inc). Then, cells were seeded at 1x104 cells/ well, in quadruplicates or triplicates in E-plates and placed in xCelligence RTCA instrument (Roche), and followed-up for 100 hours. Alternatively, irradiated or non-irradiated cells were seeded in 24-well plates and cell proliferation assessed by DNA amount per well was determined using Hoechst 33342 (Molecular Probes), at day 2 and 9 post-irradiation.

To test cell adhesion and proliferation, CD133+ cells isolated from control U87 or from shLis-U87 were seeded on E-plates (104 cells/well), which were introduced in xCELLigence RTCA and followed-up for 3 hours (for cell adhesion tests) or 160 hours (for proliferation tests). To assess the capacity to migrate toward serum, CD133+ cells isolated from U87 or shLis-U87 were seeded at a density of 4x104 cells per well in the upper chamber of CIM plates; in the lower compartment, DMEM (control) or DMEM containing 20% FBS was added. The plate was placed in xCELLigence instrument and followed-up for 3 hours.

Lis1 expression and its colocalization with CD133 in glioblastoma

Our data obtained by Real Time PCR showed that Lis1 gene is similarly expressed in normal and glioblastoma tissues (Figure 1A). These data are in agreement with those obtained by Suzuki et al. (2007) which reported that Lis1 protein levels (assessed by Western blot) were not consistently higher in glioblastoma samples as compared to normal brain tissues [20]. Considering the critical role of Lis1 in regulating the asymmetric division and self-renewal of both normal and malignant hematopoietic stem cells [8], we hypothesized that in glioblastoma, elevated Lis1 levels are associated with the small population of CD133+ cells. To determine whether differences exist in Lis1 expression among distinct glioblastoma cells, we investigated Lis1 distribution in tumor tissues. Lis1 immunostaining in glioblastoma samples displayed a broad distribution from negative to positive. In the positive specimens, a subset of glioma cells expressed Lis1 protein (Figure 1B). Colocalization of Lis1 and CD133 was noticed in certain cells, some of them distributed in the perivascular tumor area (Figure 1C, D). Previous reports showed that the main population found in the perivascular niche in glioblastoma is represented by glioma stem cells [21-23]. These cells may be found among general tumor population either as CD133+ perivascular niches or as single cells [24]. However, CD133 immunostaining results should be analyzed with caution, as a former report demonstrated inconsistent immunohistochemical expression patterns among different CD133 antibody clones [25].

Lis1 and CD133 gene expression in neurosphere-like U87 cells

To verify the correlation between CD133 and Lis1, we silenced Lis1 gene in U87 cells by stable transfection with shRNA specific for Lis1, and we obtained shLis-U87cells, that did not express Lis1 either in normal medium (Figure 2C, control) or after exposure to serum-free, neural stem cell conditioned-medium (SM) for various periods (Figure 2C, columns 24h, 48h and 120h). Incubation of U87 cells with SM induced phenotypic changes resulting in neurosphere-like morphology, as illustrated in Figure 2A left. The same morphology was noticed for U87 cells in which Lis1 was silenced (Figure 2A right). Interestingly, we found that both Lis1 and CD133 expression increased progressively within five days of U87 cells exposure to SM (Figure 2B and D, respectively), suggesting a possible correlation between Lis1 and CD133 expression. shLis-U87 cells expressed less CD133 and this could not be induced even after exposure to stem-conditioned medium (Figure 2E). As expected, Lis1 expression could not be induced in U87 cells transfected with plasmids containing specific shRNA for Lis1 (Figure 2C).

Lis1 gene expression and Lis1 colocalization with CD133 in glioblastoma. (A) Five normal and 36 glioblastoma samples were analyzed for Lis1 expression by Real-Time PCR. Lis1 expression normalized to GAPDH expression in normal (grey rhombuses) and tumor samples (black squares) are not statistically different. (B) In Lis1 positive glioblastoma samples, some intensely stained cells present a perivascular distribution (arrows). (C) Colocalization of Lis1 and CD133 in a Lis1 positive case of glioblastoma. Lis1 positive cells (brown color), and CD133 (red staining) are widely spread. The microvascular structure, separating tumor areas, is negative. (D) Details of the case presented in (C). The majority of tumor cells express both antigens. The small tumor vessels are negative. (Bars, 50 µm in B, 100 µm in C, and 25 µm in D). 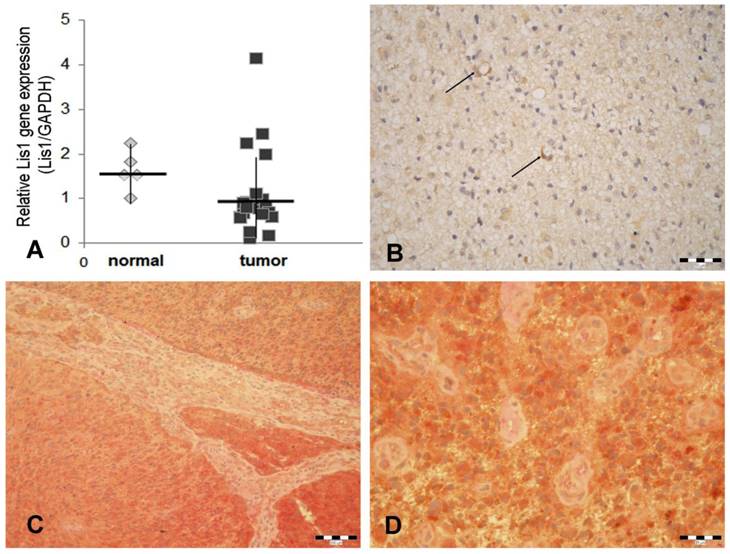 Proliferation of irradiated U87 and shLis-U87 cells

As previously known, CD133+ cells are resistant against tumor radiation therapy (11). Interestingly, we found that irradiated U87 cells recovered better their proliferative capacity than shLis-U87 cells, whether assessed by the electrical properties of the cells, as in the xCELLigence system (Figure 3A) or by quantification of the DNA amount (Figure 3B). The proposed explanation is that U87 culture contains a higher number of CD133+ stem cells resistant to irradiation compared with shLis-U87 culture. Our data confirm this hypothesis and show that the percentage of CD133+ cells in control U87 cultures exposed for five days to SM was ~2%, data in agreement with results from the literature demonstrating an increase of CD133+ cell fraction in U87 cells cultivated in SM [26]. However, the number of CD133+ cells found in shLis1-U87 under the same condition dramatically decreased to ~0.3% CD133+ (data not shown).

Lis1 and CD133 gene expression in neurosphere-like U87 cells. (A) Exposure of U87 glioma cells to stem-conditioned medium (SM) induces phenotypic modifications resulting in neurospheres after five days, in both regular U87 cells (left) and shLis1-U87 cells (right). The expression of Lis1 (B) and CD133 (D) is induced in U87 cells exposed to SM, with the highest level at day 5 of incubation. (C) As expected, silencing Lis1 gene in U87 cells (shLis-U87) inhibits its induction in cells incubated with SM. CD133 induction is almost abrogated in shLis-U87 cells (E) compared with U87 cells (D). Lis1 is highly expressed in CD133+ cells isolated from U87 cell line and primary glioblastoma (HTC1 and HTC2) cell cultures in normal culture medium (CM) or SM (F). Data show enrichment up to 60 fold in Lis1 expression in CD133 + fractions for cells grown in CM and up to 32 fold in cells incubated in SM. Lis1 expression in CD133+ fraction isolated from U87 cells grown in CM is 32 times higher than that of CD133- fraction (U87 columns); in CD133+ fraction isolated from U87 incubated in SM Lis1 expression is 35 times higher than in CD133 negative cells from the same culture. The negative control is represented by CD133+ cells isolated from shLis-U87 incubated in CM or SM for which Lis1 was not increased as compared with CD133- cells (shLis-U87/CM and SM columns). 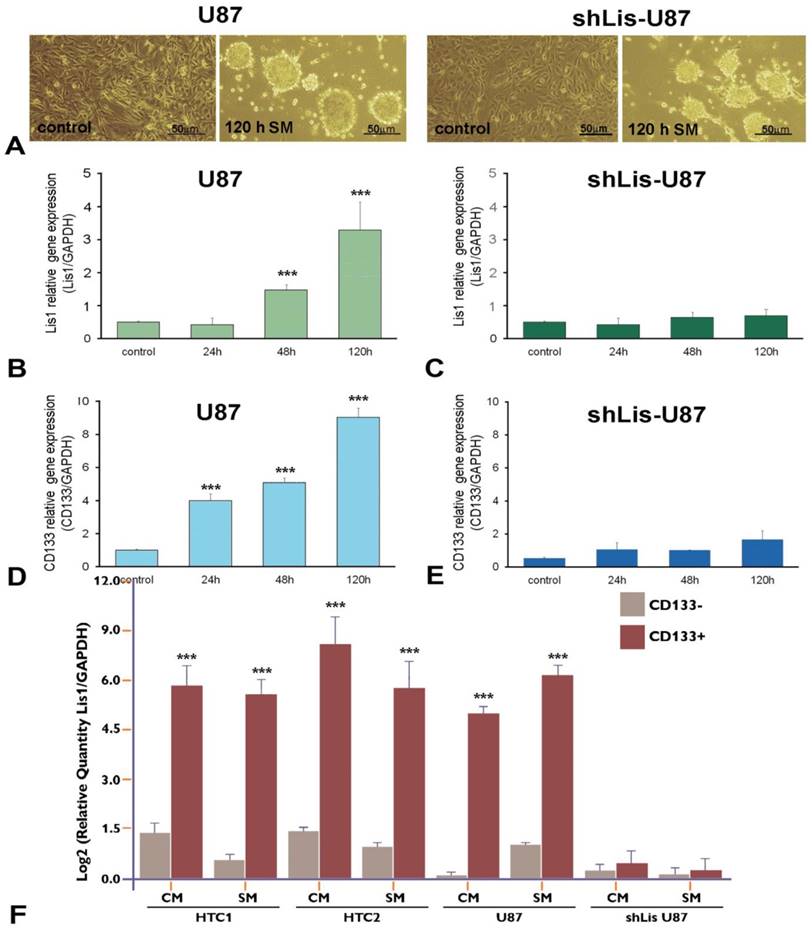 Proliferation of irradiated U87 and shLis-U87 cells. Cells having Lis1 silenced or not were irradiated with X-ray doses from 5 to 50 Gy. Cells seeded at a density of 1x104 cells/well, in quadruplicates or triplicates in E-plates and placed in xCelligence RTCA instrument, were followed-up for 100 hours (A). Alternatively, irradiated or not irradiated cells were seeded in 24-well plates and the DNA amount per well was determined using Hoechst 33342 (B). Both methods showed that irradiated U87 cells recovered better their proliferative capacity than shLis-U87 cells. 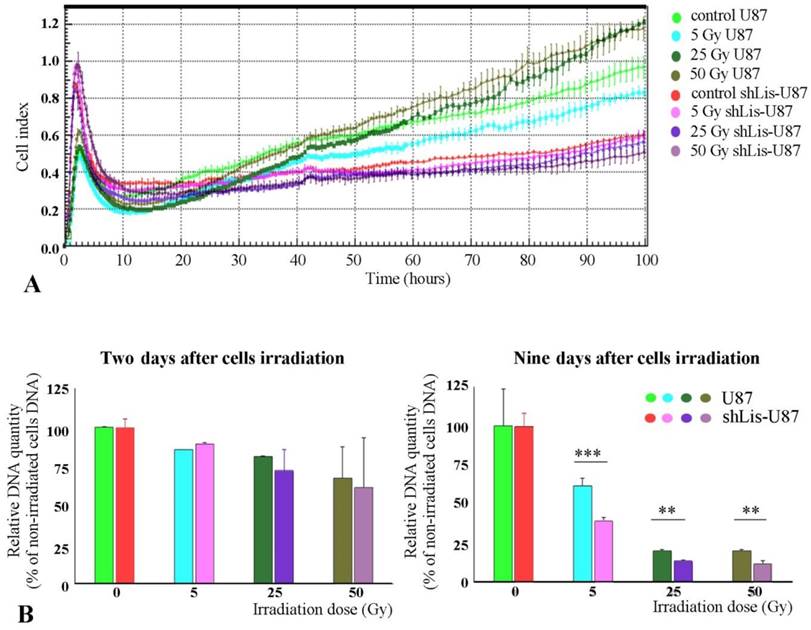 Lis1 impact on cell adhesion, migration and proliferation of CD133+cells

To explore Lis1 function in CD133+ glioblastoma cells, we tested cell adhesion, migration and proliferation of CD133+ cells isolated from U87 and shLis-U87 cells, following their behavior in real time in xCELLigence system. The purity of the fractions was assessed by CD133 expression determined by RT-PCR. Data showed a good enrichment of CD133+ cells in the positive fractions, as showed in Figure 4A.

Taken together, these data suggest that Lis1 silencing led to a deregulation of the mechanisms involved in the maintenance of the CD133+pool in glioblastoma cell population. 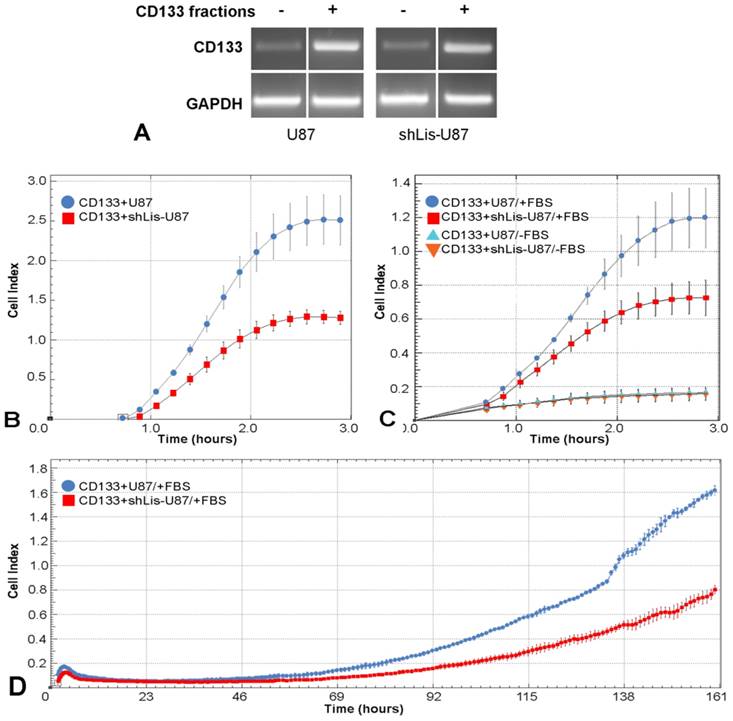 All procedures performed in studies involving human participants were in accordance with the ethical standards of the institutional and/or national research committee and with the 1964 Helsinki declaration and its later amendments or comparable ethical standards.

26. Annabi B, Laflamme C, Sina A, Lachambre MP, Béliveau R. A MT1-MMP/NF-κB signaling axis as a checkpoint controller of COX-2 expression in CD133(+) U87 glioblastoma cells. Journal of Neuroinflammation. 2009;6:8