Colorectal cancer is the most common form of malignant tumour and the second leading cause of cancer-related death worldwide [1]. Several serum cancer screening markers, including carcinoembryonic antigen (CEA), α‑fetoprotein (AFP), and carbohydrate antigen 19-9 (CA19-9), are used to screen the colorectal cancer. However, the use of these serum markers to diagnose colorectal cancer and predict prognosis remains controversial [2, 3, 4].

The study was approved by the Institutional Review Board of Konkuk University Medical Centre, Seoul, Korea (KUH1160096) and was registered at http://cris.nih.go.kr (NCT02869269). All subjects provided written informed consent.

Patients undergoing surgery under general anaesthesia for colorectal cancer between October 2015 and July 2016 were enrolled. Patients were excluded if they had histories of 1) chemotherapy, 2) radiotherapy, 3) immunosuppressive agent use, 4) bone marrow transplantation, and 5) any present symptom or sign of infection. Patients were assigned to the Early stage or Late stage group according to the presence of lymph node metastasis; the latter was determined based on preoperative computed tomography (CT) and bone scans, intraoperative surgical and pathological findings, and postoperative pathological findings.

The stage of colorectal cancer was confirmed by perioperative evaluations and pathological findings. Staging followed the American Joint Committee on Cancer (AJCC) scheme using TNM classifications. The T stage describes the size of the primary colorectal cancer tumour and whether it has invaded nearby tissue (depth). The N stage describes the regional lymph nodes that are involved (regional lymph node metastasis). The M stage describes distant metastasis [9]. We assigned patients with AJCC stages 1 and 2 to the Early stage group and those with AJCC stages 3 and 4 to the Late stage group.

In total, 12 mL blood was drawn from the antecubital vein and collected in ethylenediamine tetraacetic acid (EDTA) tubes to be used for enzyme-linked immunosorbent assay (ELISA) analyses for serum cancer markers, including CEA, AFP, CA19-9, and circulating immune cells.

Intergroup differences between early and late stages were analysed using an independent t-test or the Mann-Whitney U-test according to the normality of the distribution of the data. One-way analysis of variance (ANOVA) was used to compare group differences in regional lymph node metastasis. Categorical variables were analysed using the χ2 test. To obtain cut-off values for blood levels of Th1and Th17 cells to distinguish Early and Late stages, area under curve (AUC), using receiver operation characteristic (ROC) curve analysis, was performed.

Flow chart of the study. 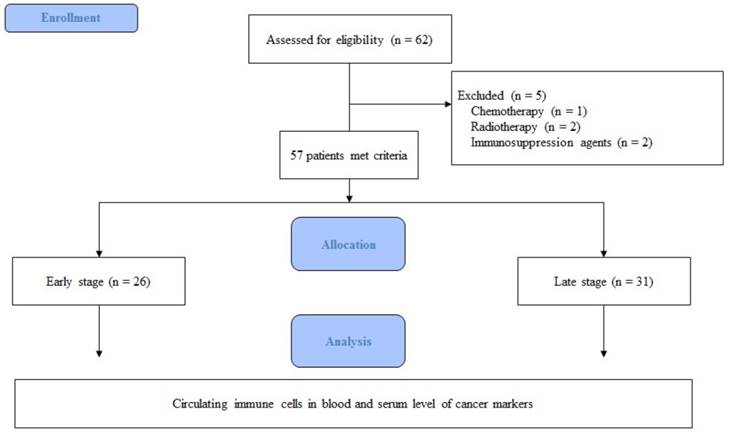 Tumourigenesis is usually accompanied by abnormal expressions of autoantibodies or other tumour markers in the body, and these can be used for tumour diagnosis and prognostic predictions. However, the serum cancer markers CEA, AFP, and CA19-9 reflected no significant differences between the Early and Late stages in this present study. In fact, serum cancer markers are more useful as screening rather than as confirmative tools for cancers, as they demonstrate high sensitivity and low specificity. Their cut-offs for screening for cancer vary according to gender, age, and location of tumour [3,4]. Thus, it was not surprising that we found no difference between the early and late stages in this study.

Values are expressed as the mean ± standard deviation.

Values are expressed as the mean ± standard deviation. 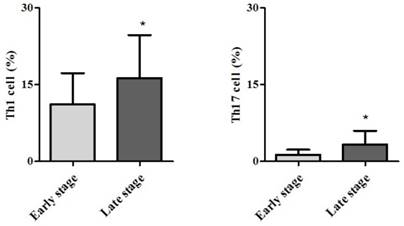 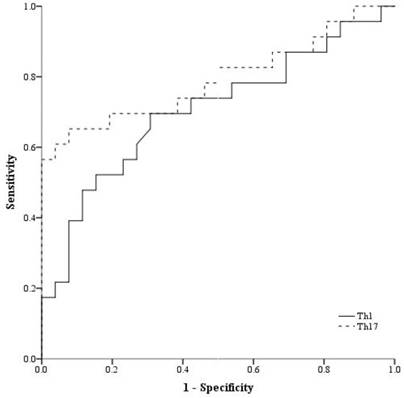 A previous study demonstrated that CD4+ T cells play an important role in mediating immune responses to tumours [10]. However, the two groups did not significantly differ with regard to levels of CD4+ T cells in this study. On the other hand, some subsets did show differences. Th1 cells make IFN-γ as their 'signature cytokine', and they also uniquely produce lymph toxin. Thus, we predicted that circulating Th1 cells would show differential expression under conditions with and without lymph node invasion. Another subset involves Th17 cells, which play important roles in inflammation and autoimmune disease; thus, they may be relevant to anti-tumour defence activities. Recently, it has been shown that Th17 cells can play promoting or suppressing roles in different cancer models [11,12]. Zhang et al. demonstrated that the blood levels of the Th17 cells with Th1 cells of cervical cancer patients were strongly correlations with their levels of Th22 cells, which have been associated with lymph node invasion [13]. Especially in colorectal cancer, Th17 cells are involved in the promotion and progression of the tumour through angiogenesis. Angiogenesis may be associated with local invasion and distant metastasis [14]. Increased levels of Th17 cells, in addition to increased levels of Th1 cells, may be considered indicative of lymph node invasion, as shown here. The increases in Th1 and Th17 cell levels were remarkable in the present study. Thus, they may be useful as blood markers to detect the presence of lymph node invasion in colorectal cancer.

A key protein in Treg cells is Foxp3 [15]. High levels of expression of Foxp3 in Treg cells inhibit an effector immune cell response to a tumour, thereby promoting tumour growth and invasion [16]. Tumour tissue in patients with colorectal cancer with lymph node invasion typically shows higher levels of Treg cells compared with that in those with no lymph node invasion, resulting in the former's poor survival and prognosis [17, 18]. However, we did not observe any difference in the blood samples in this study. Thus, the levels of Treg cells in the tumour tissue were not reflected by their levels in the blood.

CD8+ T cell and NK cells are typical innate immune cells. They respond first to dysplastic or tumour cells and perform anti-tumour activities. Their levels continue to be high after initiation of an adaptive immune response. The levels of CD 8+ T cells and NK cells have been used as indicators of the results of cancer treatment, such as survival rate, but not of cancer progression [19, 20, 21]. Thus, we did not find any differences in the levels of CD8+ T cells or NK cells between those with or without lymph node invasion in this study.

In the present study, we did not check the levels of immune cells in the cancer tissue or lymph nodes. Although confirmative results would be obtained from the cancer tissue or lymph nodes, the levels of immune cells could also be affected and changed by anaesthetic conditions and by the surgical procedure used for their procurement. Moreover, the more investigations might concrete the results although cut-off values of blood levels of Th1 and Th17 cells, used to distinguish Early and Late stages, were recommended in the present study.

This research was supported by Basic Science Research Program through the National Research Foundation of Korea (NRF) funded by the Ministry of Science, ICT and future Planning (Grant number: 2015R1A2A2A01006779, 2015).

Roles of the Authors

All authors read and accepted Terms and Conditions of Journal of Cancer.

The research was thesis of master degree for Ji yeon Lee.

9. Edge SB, Compton CC. Compton. The American Joint Committee on Cancer: the 7th edition of the AJCC cancer staging manual and the future of TNM. Annals of surgical oncology. 2010;17:1471-74