Purpose To investigate the correlation between chemoresistance of colorectal cancer to 5-fluorouracil and BNIP3 and the underlying mechanism.

Conclusion Chemoresistance of colorectal cancer to 5-fluorouracil is associated with silencing of the BNIP3 gene through aberrant methylation via DNMT1/DNMT3B.

Colorectal cancer is the third most commonly diagnosed cancer in males and the second most in females worldwide, with an estimated 1.4 million cases occurring in 2012 [1]. The highest incidence rates are mainly in developed countries and the incidence is increasing in developing countries [1]. This may partly reflect the strong association between colorectal cancer and high serum cholesterol/triglyceride [1-3]. The majority of patients with colorectal cancer were at advanced stage at diagnosis and chemotherapy should be used in these patients [4-7]. Despite an enormous amount of effort spent in the development of chemotherapies for colorectal cancer, these are effective only in a small proportion of patients. To a large extent, this discouraging fact is largely due to the ability of a malignant tumor to demonstrate resistance to chemotherapies new and old [1, 4-5, 7].

Over the last five decades, 5-fluorouracil (5-Fu) remains one of the most effective and most commonly used drugs to treat colorectal cancer [5-7]. However, intrinsic and acquired resistance remains a major setback to 5-Fu clinical efficacy. Up to 40% of patients receiving 5-Fu-based adjuvant chemotherapy following potentially curative resection of stage Ⅱ and Ⅲ colon cancer experience recurrence or die within 8 years of follow-up [5]. As high as 50% of metastatic colorectal cancer patients are resistant to 5-Fu-based chemotherapy [6-7]. Response rates to current 5-Fu combination therapies may be only about 50% [8]. Therefore, a deeper understanding of the mechanism of 5-Fu resistance is important for the customization of strategies being tailored to the individual patient.

In the present study, the role of BNIP3 in resistance of colorectal cancer to 5-Fu was explored. Silencing of the BNIP3 gene significantly negatively correlated with chemotherapy response/ progression-free survival (PFS) to 5-Fu-based chemotherapy. Aberrant methylation via DNMT1 and DNMT3B was involved in the mechanism of resistance to 5-Fu caused by silencing of the BNIP3 gene.

All available hematoxylin and eosin (H&E) stained slides were reclassified by a pathologist without knowledge of patient's data. Tumor differentiation was graded as follows: well, moderate, or poor.

Informed consent was obtained from all patient involved in this study. This study was approved by the Ethics Committee of Southwest Hospital, the Third Military Medical University and was carried out in accordance with the associated guidelines.

Immunostained sections were analyzed independently by a pathologist without prior knowledge of clinicopathological data. Expression of BNIP3 was evaluated as previously described, based on the percentage and intensity of positively-stained cells [10]. The percentage of positively-stained cells was scored as: 0, negative; 1, positive in ≤ 10%; 2, positive in 11~50%; 3, positive in 51~80%; 4, positive in > 80% of cells. Staining intensity was scored as 0=negative, 1=weak, 2=moderate, and 3=strong. The score of one slide=the score of intensity × the score of the percentage。The slide with score of BNIP3 less than 2 was considered as negative. The slide with higher score was considered as positive.

For 5-Aza (Sigma-Aldrich) exposure, cells were cultured with 5-Aza in the media as indicated [13].

RT-PCR was performed as previously described [10]. Total RNA of cells was extracted with Trizol reagent (Invitrogen, Carlsbad, CA, USA), and first-strand cDNA was synthesized using 2μg of total RNA. Then 1μL cDNA was employed as a template for the PCR reaction. Each gene was amplified by PCR using the following cycle: preliminary denaturation at 95 ℃ for 5 min, followed by cycles of denaturation at 94 ℃ for 30 s, annealing for 45 s, and elongation at 72 ℃ for 30 s, followed by a final elongation step at 72 ℃ for 10 min. The annealing temperatures for β-actin, BNIP3, DNMT1 and DNMT3B were 61℃, 61℃, 57℃ and 59℃, respectively. The cycles of PCR amplication for β-actin, BNIP3, DNMT1 and DNMT3B were 26, 30, 30 and 30, respectively. The PCR products were subjected to agarose gel electrophoresis with ethidium bromide. The primers used for RT-PCR are listed in Table 1. β-actin was used as an internal standard.

Western blot was performed as previously described [14-15]. Cells were lysed in RIPA buffer with protease inhibitors and phosphatase inhibitors for 30 minutes on ice. Following centrifugation (16,000 g, 30 minutes, 4 ℃), the supernatant was collected as total cell protein. The protein was resolved by SDS/PAGE and blotted on PVDF membranes (Millipore, Bedford, MA, USA). The PVDF membranes were incubated with specific primary antibodies at 4℃ overnight. After incubation with HRP-linked secondary antibodies at room temperature for 2 hours, immunoreactive proteins were visualized by the enhanced chemiluminescnet substrate (Thermo Scientific, Pittsburgh, PA, USA).

BNIPs was knocked down by plasmid mediated small hairpin (sh) RNA interference using pGenesil-1 (Genesil Biotechnology Co, Ltd., China) according the manual[18]. The BNIP3-targeting vector (shBNIP3) or an empty vector (Mock) was transfected into LoVo cells using Lipofectamine® 2000 (Invitrogen) according to the manufacturer's instructions [4, 14]. Cells were selected using neomycin (Sigma-Aldrich). The sense sequence of the shRNA targeting BNIP3 is GGAATTAAGTCTCCGATTA.

Propidium iodide (PI) (BD Biosciences Clontech, Palo Alto, CA, USA) was utilized for flow cytometry to determine the percentage of apoptotic cells and the percentages of cells at different stages [19]. Cells were harvested and were incubated with 300 μL 50 μg/mL PI for 30 minutes at 4 ℃ in the dark. Each sample was analyzed using flow cytometry (BD Biosciences Clontech) within 30 minutes.

Drug sensitivity was assayed using the MTT assay [20]. In brief, cells were seeded in 96-well plates with 100 μL media each well and treated as indicated. Then, 20 μL 5 mg/mL MTT (BD Biosciences Clontech) was added to each well and was incubated at 37 ℃ for 4 hours. MTT/media was replaced with 150 μL DMSO (Sigma-Aldrich) each well and the plate was shook for 15 minutes to dissolve formazan crystals that formed. The absorbance was measured at 490 nm using a microplate reader.

Cells were seeded in 24-well plates at the concentration of 1×104/well. Cells were trypsinized as single cell suspension 1, 2, 3, 4, 5 days later and were counted using a cytometer. Each time point contained 3 samples and each sample was counted 3 times.

The data shown represent the mean ± standard error. The Kaplan-Meier test and Spearman's rank correlation coefficient were used to analyze the relationship between BNIP3 and clinicopathological parameters. Overall survival (OS) and progression-free survival (PFS) curves were estimated by the Kaplan-Meier technique and compared with use of the two-sided log-rank test. Statistical differences between groups were analyzed by Student's t-test, one-way ANOVA in other experiments. A p-value<0.05 was considered statistically significant.

Archival surgical resection specimens from 81 patients with colorectal cancer (46 male; 35 female) with a mean age of 56 (range 18-81) years were analyzed. Of the 81 cancer samples, 19 were in the proximal colon, 15 were in the distal colon and 47 were in the rectum. 29 were well differentiated, 37 were moderately differentiated and 15 were poorly differentiated. 1 was CR, 32 were PR, 22 were SD and 26 were PD. All samples underwent immunohistochemical staining for BNIP3 protein.

Spearman's rank correlation coefficient analysis of the association between presence of immunohistochemical staining of BNIP3 and clinicopathological parameters in patients with colon cancer (n=81).

To explore the role of BNIP3 in colorectal cancer, BNIP3 in LoVo was knocked down using plasmid delivery of shRNA. Knockdown efficiency was evaluated using RT-PCR (Fig. 2C) and western blot (Fig. 2D). Chemosensitivity was assayed using MTT. LoVo cells were inoculated in 96 well plates with a density of 5×103/well. 48 hours later, cells were treated with gradient concentrations of 5-Fu 48 hours. Then, MTT assay was applied. Results showed that knockdown of BNIP3 significantly decreased chemosensitivity of LoVo cells to 5-Fu (Fig. 2E). IC50 (50% inhibiting concentration) of Parental, Mock and shBNIP3 LoVo cells were 52.79±2.75 μg/mL, 50.08±2.85 μg/mL and 108.4±4.69 μg/mL, respectively. IC50 of shBNIP3 were significantly higher than that of Parental or Mock (p<0.05) (Fig. 2F). Apoptosis of LoVo treated with 20 μg/mL 5-Fu for 48 hours was assayed by PI staining and flow cytometry (Fig. 2G). Apoptosis ratio of Parental, Mock and shBNIP3 were 19.75±2.37, 21.24±2.71 and 8.35±0.46, respectively. This indicated that knockdown of BNIP3 significantly decreased 5-Fu induced apoptosis (p<0.05). Knockdown of BNIP3 also increased cell growth in vitro (Fig. 2H). 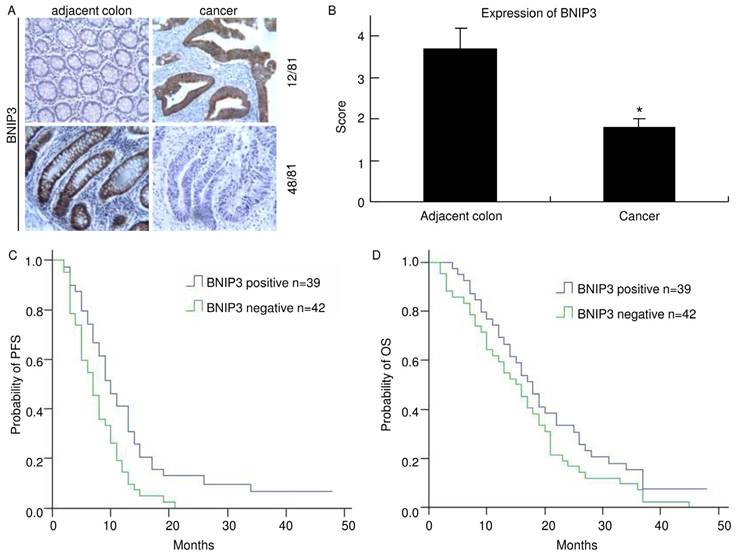 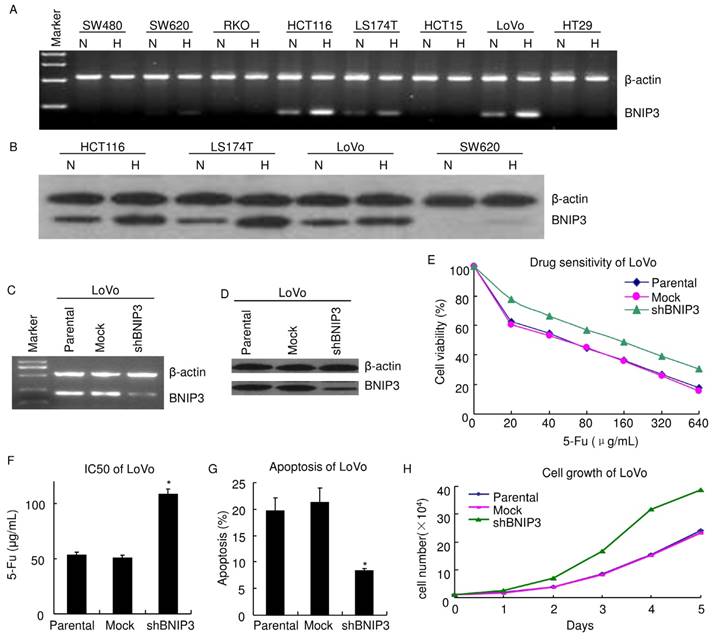 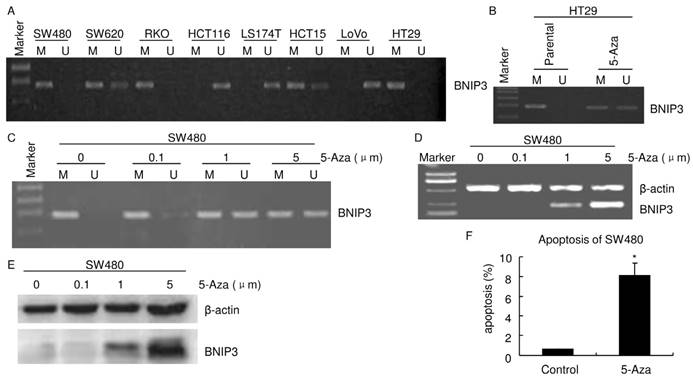 HT29 and SW480 cells were treated with the demethylating agent, 5-Aza. MSP-PCR analyses verified that both a BNIP3 unmethylated allele and a methylated allele were detectable in HT29 treated with 1 μm 5-Aza for 24 hours (Fig. 3B). 5-Aza 24 hours treatment increased BNIP3 unmethylated allele level in SW480 (Fig. 3C). Results of RT-PCR and western blot showed that 5-Aza increased BNIP3 in a dose dependent manner (Fig. 3D and E). Taken together with results mentioned above, these indicated that absence of BNIP3 expression was caused by aberrant methylation of BNIP3 gene. Since BNIP3 is a pro-apoptotic protein, increasing its expression may increase apoptosis. Results of PI staining flow cytometry showed that 1 μm 5-Aza 72 hours treatment significantly increased apoptosis in SW480 (Fig. 3F).

DNMT1 and DNMT3B play different roles in the mechanism of aberrant methylation of BNIP3 increasing chemoresistance to 5-Fu. A) RT-PCR. B~C) Western blot. D) Methylation status of the BNIP3 promoter in cell lines was examined by MSP-PCR. Bands in Lanes U and M are PCR products amplified with unmethylated and methylated gene-specific primers, respectively. E) RT-PCR. F) Western blot. E) MTT. Knockdown of DNMT1 increased chemosensitivity of HT29 cells to 5-Fu. Knockdown of DNMT1 and 3B increased chemosensitivity more than knockdown of DNMT1 alone. H) IC50. (*: p<0.05 vs Mock or Parental; #: p>0.05 vs Mock or Parental; $: p<0.05 vs siDNMT1; §: p<0.05 vs siDNMT3B) 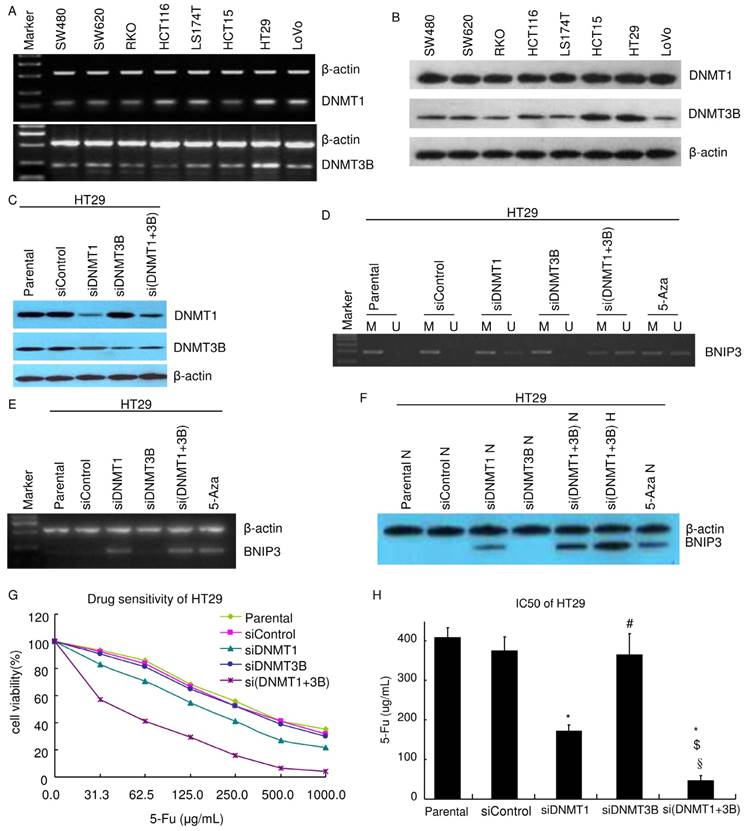 Accumulating evidences indicate DNA methylation, one of the epigenetic modulations, is important in transcription regulation and chromatin structure remodeling during colorectal cancer development [13, 21-23, 29]. Recent works have verified that aberrant DNA methylation could result in genome-wide hypomethylation and regional hypermethylation, which is identified as a possible mechanism of inactivation of tumor suppressor genes, thus it may play an important role during carcinogenesis [13, 21-22]. DNA methylation mainly occurs at the CpG dinucleotides by three DNA methyltransferases (DNMTs), namely DNMT1, DNMT3A, and DNMT3B [22, 24-25]. DNMT1 is the maintenance methyltransferase that ensures faithful transmission of the methylation profile from maternal to daughter cells during cell division [25]. DNA methyltransferases DNMT3A and 3B are essential for de novo methylation by catalyzing the transfer of a methyl group to cytosine residues on DNA [24]. The promoter of BNIP3 is located within a CpG island and aberrant methylation of the BNIP3 gene in colorectal cancer was reported in several papers [21-23, 29]. This study showed that the colorectal cell lines which displayed BNIP3 unmethylated allele expressed BNIP3 and those which displayed BNIP3 methylated allele only did not expressed detectable BNIP3 (Fig. 2A, 2B, 3A). Demethylation dramatically increased BNIP3 expression level (Fig. 3B~E). These indicate that absence of BNIP3 expression was caused by aberrant methylation of BNIP3 gene. Further experiments showed that DNMT1 and DNMT3B played different roles in regulating BNIP3. The detail mechanism is still unclear and intensive investigation is deserved.

BNIP3 is present in the outer mitochondrial membrane with its N-terminus in the cytoplasm and its C-terminus inside the mitochondrion [27]. It collapses mitochondrial membrane potential, increases generation of reactive oxygen species, induces mitochondrial swelling, promotes mitochondrial fission, and stimulates mitochondrial turnover [28]. When the damaging effects of BNIP3 exceed the ability of the cell to efficiently dispose of damaged mitochondria, cell death can ensue [28]. 5-Fu kills cancer cells largely through mitochondrial pathway [30-31]. Therefore, the role of BNIP3 in chemoresistance to 5-Fu was explored. In vivo experiments showed that the decreased BNIP3 expression significantly negatively correlated with the response rate to L-OHP+CF+5-Fu chemotherapy (Table 2). In vitro experiments showed that knockdown of BNIP3 significantly decreased chemosensitivity to 5-Fu and increasing BNIP3 through demethylation via 5-Aza or knockdown of DNMT1/DNMT1+3B significantly increased chemosensitivity to 5-Fu (Fig. 2E~G, 3F, 4G~H). These unanimously indicate that absence of BNIP3 expression in colorectal cancer increased chemoresistance to 5-Fu.

The study was approved by the Ethics Committee of Southwest Hospital, the Third Military Medical University. All procedures performed in this study were in accordance with the 1964 Helsinki Declaration and its later amendments.