Chemotherapy regimens and administering schedules showed some heterogeneity. All chemotherapy schedules were either 5-Fu-based mono-agent or multi-agent therapies. Most of the patients received a continuous infusion of 5-Fu (1000 mg/m2 daily on days 1-4) or capecitabine, or capecitabine plus oxaliplatin.

Survival rates were evaluated using Kaplan-Meier curves and compared using the log-rank test. All statistical tests were two-sided, and a p value<0.05 was considered statistically significant. All tests were performed using IBM SPSS 20.0.

In this retrospective study, a total of 126 eligible patients were identified from 1965 to 2015. Table 1 shows the baseline clinical and treatment characteristics of patients. The male to female ratio was approximately 1.21:1. The median age of the population was 55.5 years (range, 17-89 years). In all, 74.6% (94/126) patients received APR or tumorectomy. 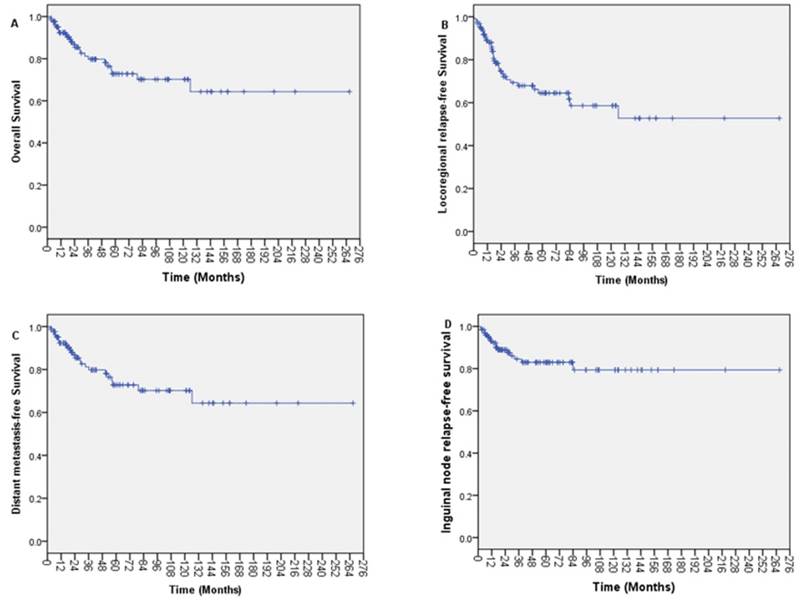 We appreciate all individuals, particularly the people of Sun Yat-Sen University Cancer Center, including doctors, nurses, coordinators, and the Data Management team who generously spared their time for the accomplishment and fulfillment of this project.

This study was reviewed and approved by the institutional review board and ethics committee of Sun Yat-Sen University Cancer Center. All patient records were anonymized and de-identified prior to analysis.