Methods: We retrospectively analyzed 1135 patients with radical esophagectomy for ESCC from January 2008 to December 2010 in our center. X-tile software was used to determine the optimal cutoff levels for these biomarkers.

Esophageal cancer is one of the most common malignancy worldwide[1]. In China, the major type of esophageal cancer is esophageal squamous cell carcinoma (ESCC) [2]. Growing evidence indicates that neoadjuvant chemoradiotherapy may be more appropriate for locally advanced esophageal cancer while surgery is the main treatment strategy for early stage disease[3,4]. Thus, accurate preoperative staging helps the clinician to determine the treatment strategy. However, preoperative staging tools such as tumor markers, computed tomography (CT), endoscopic ultrasound (EUS) and positron emission tomography (PET) may be inaccurate. Identifying a simple and convenient indicator to stratify subgroups of patients is needed.

It has been reported that coagulation was associated with a more malignant disease [5,6]. Fibrinogen, a glycoprotein synthesized by liver epithelium, plays an essential role in the coagulation cascade, converting to fibrin monomers and ultimately forming the fibrin polymers[7]. Previous studies indicated that elevated preoperative fibrinogen level might induce higher malignance progression and poor prognosis[5,6]. However, few studies have investigated the predictive impact of preoperative fibrinogen levels in ESCC patients. In addition, it has been demonstrated that malnutrition is a predictor in various cancers[8], and albumin is regarded as a nutritional indicator. Hypoalbuminemia was found to be associated with poor prognosis in various cancers, including lung, gastric, and colon cancers[8].

We reviewed the data of ESCC patients with radical esophagectomy at the Sun Yat-sen University Cancer Center between January 2008 to December 2010. We excluded patients received neoadjuvant or adjuvant therapy and with R1/R2 resection. We also excluded patients who received anticoagulant treatment or albumin transfusions before treatment. Preoperative assessment included routine blood examination, pulmonary function test, electrocardiography, esophageal radiography, CT scans of the chest and upper abdomen, cervical ultrasonography, and an upper gastrointestinal endoscopy or EUS with biopsy before treatment. All patients were performed by radical esophagectomy and two-field or three-field lymphadenectomy. Three-field lymphadenectomy was performed when the cervical lymph nodes were deemed to be potentially positive based on the preoperative assessment. Retrosternal or posterior mediastinal routes were performed for esophageal reconstructions with gastric conduits or colons. All resected specimens were labeled by the surgeon and submitted for pathologic examination. Lymph node involvement was determined based on the 7thAJCC/TNM staging system[9].

The levels of preoperative fibrinogen and albumin were examined from blood samples obtained before breakfast within two weeks before surgery. The samples were promptly centrifuged and processed within two hours. The fibrinogen was processed by a CA-7000 automatic coagulation analyzer (Sysmex Corporation, Kobe, Japan). The levels of fibrinogen were measured by reagents (Siemens AG, Munich, Germany) provided through a Diagon Dia-Timer 4 (Diagon Ltd, Budapest, Hungary). We used the bromocresol green(BCG) dye method to measure the levels of the serum albumin. The FAR was defined as the fibrinogen levels divided by the serum albumin levels. The GPS and modified GPS (mGPS) were defined as before[10,11].

Followed up in our center was recommended every three months during the first two years, then every six months for the next three years and annually afterwards. The protocol includes medical history and physical examination, chest radiography, esophageal radiography, and/or CT from the neck to the upper abdomen. Upper endoscopy or PET were performed as clinically indicated recurrence or metastasis. January 2016 was the last follow up date.

We used SPSS 17.0 software (SPSS Inc., Chicago, IL, USA) to perform the statistical analysis. The association between the FAR and clinicopathologic factors was assessed by the Chi-square test. The correlation between FAR and CRP, and NLR were assessed through linear correlation analysis. The survival time was assessed by the Kaplan-Meier method. The difference in survival between groups were estimated by the log-rank test. Multivariate analyses were used to evaluate the independent prognostic factors for OS by the Cox regression proportional hazard model. A p-value less than 0.05 was considered statistically significant. All cut points were assessed by the X-tile software (http://www.tissuearray.org/rimmlab/)[12], identifying the cutoff with the minimum p-value according to the survival status.

Correlation of the FAR with the clinicopathological features of patients. 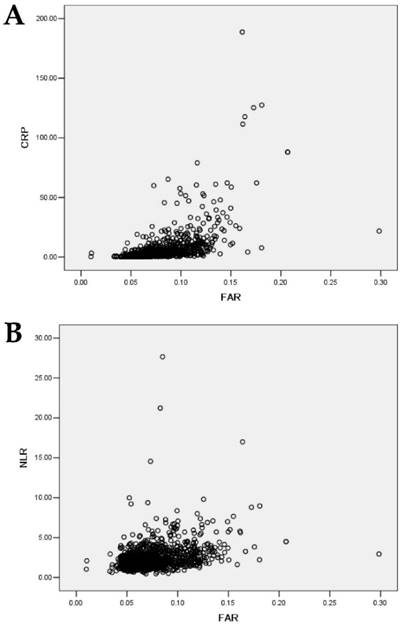 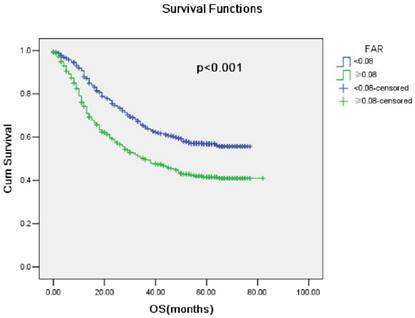 Previous reports have indicated that the hypercoagulable state is thought to be related to a more malignant disease [5,6,13]. However, the mechanism underlying the relationship between the level of fibrinogen and cancer progression remains unclear. Several potential mechanisms may explain the prognostic values of the level of fibrinogen in cancer. Fibrinogen acts like a dimeric molecular bridge to promote cell to cell adhesion. Higher fibrinogen receptors, integrin or non-integrin (eg, intercellular adhesion molecule 1), are usually expressed by malignant cells. Fibrinogen connects malignant cells and vascular endothelium to enhance tumor progression and metastasis[14,15]. Furthermore, platelets also have a fibrinogen receptor (eg, aII b3 integrin). Fibrinogen promotes the bridge between platelets and malignant cells, which can be easier to form microemboli in targeted organs, increasing in parallel with tumor progression and metastasis[16]. Moreover, fibrinogen may produce signals to tie up growth factors, such as vascular endothelial cell and fibroblast growth factors, promoting malignant cell proliferation and angiogenesis[17]. In addition, several studies reported that anticoagulants, such as low-molecular-weight heparins and heparins, may prolong survival in cancer patients by preventing the progression of metastasis[18,19]. Although further investigations are essential to validate the effectiveness and safety of anticoagulants, it would seem that anticoagulation therapy may help to prolong survival in cancer patients.

Fibrinogen is not only an essential component of the coagulation cascade but also an acute-phase reactant reflecting a state of systemic inflammation. It has been reported that fibrinogen plays an important role on the process of inflammation, promoting proinflammatory cytokines synthesis in peripheral blood inflammatory environment [20,21]. An interesting animal experiment showed that fibrinogen might be a critical factor of the metastatic potential in lung carcinoma and melanoma cells. The development of metastasis was decreased in mice lacking fibrinogen [22,23]. The findings set up a significant connection between coagulation and natural immune system. It may demonstrate that the fibrinogen-platelet link administers to metastatic development by helping malignant cells to prevent natural killer cell with thrombin. Fibrinogen-platelet microthrombi may provide a defense to keep malignant cells from the natural immunity and avoid removal of malignant cells [22]. Additionally, it is proven that interleukin-6 (IL-6), an inflammatory protein, has been found to be a critical regulator of hyperfibrinogenemia [24]. Therefore, hyperfibrinogenemia is deemed to be related to the overproduction of inflammatory cytokines such as IL-6 in malignant cells, suggesting that inflammatory status and tumor aggressiveness behavior might be reflected by fibrinogen levels.

Albumin is an indicator in the assessment of nutritional status. Several studies have reported that lower serum albumin may result in a deterioration of disease and a high risk of poor outcome in patients with cancer [8,25]. It is demonstrated that malnutrition may weaken the immune system, increasing the chance of infection and further accelerating the progression of malignancy [8]. Furthermore, a low serum albumin level is also a marker of systemic inflammatory response, promoting tumor proliferation, invasion, and migration. It is found that albumin may aid to stabilize DNA replication and cell growth, regulate body reaction, strength natural immunity and prevent malignant disease [25].

FAR, which absorbs the fibrinogen and albumin, suggests that it might combine the predictive effects of those indexes and reflect a mixed prognostic value. In our study, we found a positive correlation between FAR and the inflammatory indicator CRP or NLR. Thus, FAR was related with not only a coagulation and nutrition based index, but also a inflammation based index. For all we know, this is the first study concentrating on the prognostic impact of FAR in ESCC. Both fibrinogen and albumin are routinely measured in clinical practice. The measurements are inexpensive, convenient and repeatable. Furthermore, the present study also found that FAR correlated with longer tumor length, deeper tumor invasion, and increased burden of the regional lymph node status in ESCC patients. It indicated that FAR might help to identify a subgroup of patients who were considered to be borderline candidates based on conventional imaging techniques. It may assist in the selection of patients with ESCC for neoadjuvant chemoradiotherapy in preoperative management.

However, our study was limit to its retrospective design including the data collection. Moreover, as the data were from a single center, whether our findings can be applicable to other centers needs to be validated. Furthermore, although the current guidelines recommended that induction chemoradiation followed by surgery is the optimal treatment strategy for locally advanced esophageal cancer patients, neoadjuvant chemoradiation were not commonly undertaken before 2010 in our center. Therefore, larger sample sizes are needed for verification.

In conclusion, our present study indicates that preoperative FAR was an independent prognostic factor in ESCC patients. Lower FAR may improve OS of ESCC patients.

We thank the members of Guangdong Esophageal Cancer Institute for their cooperation and assistance.

19. Kuderer NM, Khorana AA, Lyman GH. et al. A meta-analysis and systematic review of the efficacy and safety of anticoagulants as cancer treatment: impact on survival and bleeding complications. Cancer. 2007;110:1149-61