Conclusions: The regional failure of NPC after treatment with IMRT is uncommon but is significantly higher in N2-3 patients than in N0-1 patients. In-field failures represent the main pattern of regional recurrence and are most often detected in level II and in the retropharyngeal area, while out-field failure is rare. Close attention should be directed to NPC patients with advanced N stages.

Nasopharyngeal carcinoma (NPC) has a high propensity for regional node metastasis [1]. Owing to its anatomical location and histological characteristics, radiotherapy (RT) with or without chemotherapy has been the mainstay of definitive treatment for NPC [2]. A meta-analysis [3] based on 13 clinical trials revealed that lymphatic spread in the cervical nodal chain from NPC primarily follows an orderly fashion with infrequent skip metastases. The authors of the meta-analysis also reported that the most commonly affected lymph node regions include the retropharyngeal nodes and the level II nodes, whereas the least commonly affected lymph node regions include level I, level VI, and parotid nodes. These findings are important for the selection of an optimal treatment strategy and for the delineation of subclinical regional disease.

During the conventional two-dimensional RT era, the fields of RT for NPC typically encompassed the primary disease and affected neck nodes, as well as the entire draining lymphatic region of the neck; co-irradiation of the parotid glands was thus unavoidable. However, such a strategy might represent over-treatment and may lead to substantial and serious toxicities owing to the large field involvement of the neck, irrespective of nodal status [4, 5]. With the advent of intensity-modulated radiotherapy (IMRT), treatment delivery can be selective and accurate, targeted to the nodal spread patterns of NPC. For instance, treatment can include high-risk lymph node regions while sparing low-risk lymph node regions. Although a series of studies reported satisfactory regional control and decreased late normal tissue toxicities for NPC patients after IMRT with selective neck irradiation, geographic misses still occur and may cause unexpected regional failures, such as recurrence in parotid nodes [6-10]. Therefore, in this study, we retrospectively analyzed the 5-year treatment results of patients with NPC who were treated with IMRT to identify long-term patterns of regional failure.

All patients were treated in the supine position using a thermoplastic mask and received IMRT with 6 MV X-ray. Intravenous contrast-enhanced CT using a slice thickness of 5 mm was performed for RT planning. The CT data were imported into the treatment-planning system for treatment design.

The primary gross tumor volume (GTV) and the involved lymph nodes included all gross tumors found during the clinical and imaging examination. The clinical target volume (CTV) included the nasopharynx, the retropharyngeal lymph node, the skull base, the anterior third of the clivus, the pterygoid fossa, the parapharyngeal space, the inferior sphenoid sinus, the posterior third of the nasal cavity and the maxillary sinus (the whole sphenoid sinus and clivus should be covered for stage T3 and T4 disease), and the drainage region of the upper neck (levels II, III and Va in N0 patients and levels II-Vb in N1-N3 patients). Neck level Ib was excluded from the CTV in patients without node involvement in level Ib. Critical normal structures, including the brainstem, spinal cord, optic nerves, chiasm, lens, eyeballs, temporal lobes, parotid glands, and larynx, were carefully delineated.

The prescription doses were 66-70.4 Gy/30-32 fractions to the GTV in the nasopharynx, 66 Gy to the positive neck nodes, 60 Gy to the high-risk CTV and 54 Gy to the low-risk CTV. All patients were irradiated with 1 fraction each day for 5 days per week.

All of the patients at stage II (lymph nodes measuring 4 or more cm in diameter), III or IV received platinum-based chemotherapy. A total of 241 (87.6%) patients received chemotherapy; concurrent and nonconcurrent (neoadjuvant ± adjuvant) chemotherapy was administered to 31 and 210 patients, respectively.

Patients were evaluated weekly during radiation therapy. After treatment completion, follow-up assessments were conducted every 3 months for the first 2 years, every 6 months from the third through the fifth year, and annually thereafter. Each follow-up included medical history, physical examination, and nasopharyngoscopy. An enhanced MRI of the nasopharynx and neck areas was performed every 6 to 12 months after treatment. Chest X-ray and abdominal ultrasonography were conducted once yearly. Additional tests were ordered whenever there was any clinical indication.

Adverse events related to chemotherapy and radiotherapy were graded by the National Cancer Institute Common Toxicity Criteria, version 3.0 [12] and by the Radiation Therapy Oncology Group criteria [13], respectively. The assessment of tumor response was based on MRI findings according to the Response Evaluation Criteria for Solid Tumors criteria [14].

A total of 275 NPC patients with a definite pathological diagnosis (WHO II-III) were analyzed. The patients included 209 males and 66 females with a median age of 49 (16-73) years. All patients completed IMRT, except for two patients who discontinued radiotherapy owing to Grade III mucositis or for personal reasons at doses of 59.4 Gy/27F and 63.8 Gy/29F. The characteristics of the patients are listed in Table 1. The distributions of the T and N classifications according to the AJCC staging system are listed in Table 2.

Among the enrolled patients, 17 exhibited regional recurrence. The median interval from the start of treatment to the diagnosis of nodal failure was 29 (8-79) months. Table 3 shows the patterns of regional failure with respect to radiation field coverage at each level. Considering multilevel regional recurrences, the most frequent recurrence sites were level II and the retropharyngeal area, accounting for 70.6% (12/17) and 52.9% (9/17) of all cases, respectively. Other recurrent nodal levels included level III in 5 patients and level IV in 4 patients. All but 1 regional failure developed in-field; the exception occurred in a patient who displayed recurrent disease in the parotid gland region (out-field). No level Ib failures were detected. Of the five patients with multilevel recurrent nodes in the neck, two had a conglomerate of at least three nodes in the ipsilateral neck before initial treatment, one had bulky nodes at level II, and the other two had bilateral multilevel nodes and supraclavicular lymph nodes before the initial treatment. The patient who failed in the spared region of the parotid gland 28 months after IMRT had bilateral multilevel lymph nodes and right retropharyngeal lymph nodes before the initial treatment, and no evidence of nodules was observed in pretreatment MRI images. Eventually, 10 patients died of regional failure; 5 of them exhibited distant metastasis.

Distribution of patients according to AJCC stage

Patterns of regional failure of the 17 patients 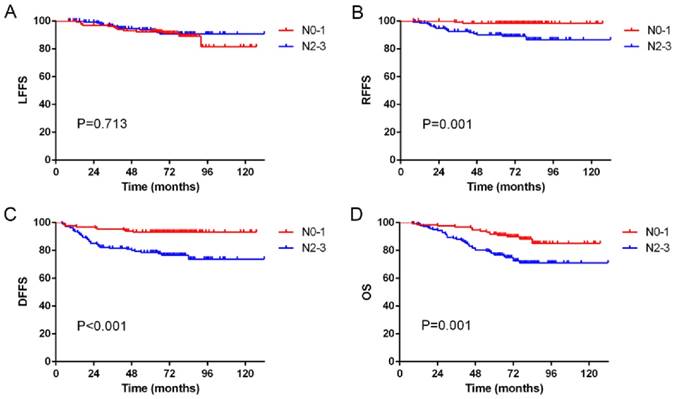 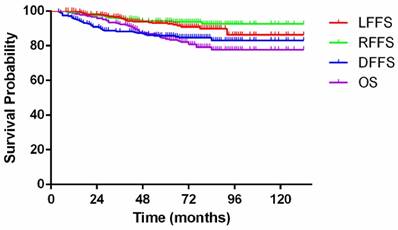 Regional node metastases are common in patients with NPC. Approximately 69.5%-86.4% of patients were reported to have regional lymph node metastases at the time of diagnosis [3, 9, 17]. Therefore, regional control is a major concern in NPC treatment. Li et al. [18] reported that 75% of their NPC patients had involved lymph nodes, and 7.7% eventually underwent recurrence after treatment. A total of 84.7% (233/275) of the patients in our study presented with lymphadenopathy at the time of diagnosis, and only 6.2% (17/275) of the patients developed regional failure at a median follow-up time of 71 months. We achieved excellent 5-year regional control of 94.3%, similar to 92.3%-93.0% reported by other IMRT studies [8, 19, 20].

In the present study and in other NPC studies, a large proportion of regional recurrences occurred in-field. Kong et al. [21] analyzed 370 non-metastatic NPC patients treated with IMRT (with or without chemotherapy) and found regional relapses in 11 patients, of which 81.8% (9/11) were in-field. With a median follow-up of 70.4 months, 6.0% (10/165) of patients with NPC who had been treated with IMRT developed nodal relapse, and in-field failures accounted for 60% of all nodal failures, as reported by Li et al. [18]. The authors also demonstrated agreement between the phenomenon that most in-field failures occurred in level II and the distribution of pretreatment nodes in patients with NPC, as level II was the most frequently involved nodal group. Our results are in accordance with such findings, showing that in-field failures (94.1%) represent the main pattern of regional recurrence. We also found that the most frequent failure sites were level II (70.6%) and the retropharyngeal area (52.9%); other recurrent nodal levels included level III in 5 patients and level IV in 4 patients. This finding suggested that the frequency of relapse in the jugular lymph node chains decreased in a cranio-caudal direction (level II 70.6%, level III 29.4%, and level IV 23.5%), similar to the distribution patterns of metastatic nodes at the time of diagnosis [17]. The predominance of in-field failures may result from nonuniform clonogenic cell density and radiosensitivity within the field, as most lymph nodes presented with liquefaction. Hypoxia often develops in liquefied areas because of a less-ordered, often chaotic, and leaky vascular supply compared with the vasculature in normal areas [22]. Hong et al. [23] presented a review of articles about tumor hypoxia and found that tumor hypoxia is common in NPC and is associated with disease progression and resistance to therapy, indicating that hypoxic radioresistance may be one cause of regional failure.

Though pre-existing metastasis at the periparotid area is rare, several cases have been reported of nodal recurrence in the parotids after IMRT for NPC. Li et al. [18] reported 4 cases with parotid nodal failure among 165 patients treated with parotid-sparing RT for NPC, and these cases accounted for all of the out-field failures and for 40% of the total nodal relapses. Three cases showed subcentimeter nodules at the same site in the parotid gland in which the recurrent nodes were located in the pretreatment MRI, despite a negative positron emission tomography (PET). Cao et al. [6] also reported 10 failures in the region of the parotid gland among 716 NPC patients after IMRT, of which 9 (90%) had lateral retropharyngeal lymphadenopathy at the time of diagnosis. In the present study, only 1 patient failed in the spared region of the parotid gland with bilateral multilevel lymph nodes and right lateral retropharyngeal lymphadenopathy before the initial treatment, and no evident nodules were seen in pretreatment MRI images. These findings suggest to us that great attention must be paid to pretreatment images and to histopathological examination, especially when nonspecific periparotid nodules are seen; additionally, the presence of retropharyngeal lymphadenopathy or multilevel nodal disease at diagnosis may indicate a high risk of periparotid recurrence. Considering the proximity of the parotid gland to retropharyngeal lymphadenopathy and complex network of lymphatic channels and nodes, the recurrence may result from pretreatment-neglected micrometastasis and changes in lymphatic drainage after IMRT. Notably, 1 patient developed acinic cell carcinoma of the parotid gland as a second primary cancer in our study, suggesting a significant role for pathological diagnosis when abnormalities are seen in the parotid gland after IMRT.

Prospective and retrospective studies [8, 9, 29] have shown that N stage is an independent prognostic predictor of RFFS, DFFS and OS. Our results were in close agreement with these previous studies. In addition, the present study demonstrated that lymph node liquefaction was also an independent prognostic predictor of DFFS and OS, probably because the liquefied area is related to hypoxia and radioresistance, as illustrated by Hong et al. [23]. There were several limitations in this study. First, the chemotherapy regimens were not consistent. Second, the number of enrolled patients was relatively small. Therefore, prospective and randomized clinical trials with a larger cohort are needed for further research.

In conclusion, our study shows an excellent 5-year regional control rate for NPC of 94.3% with IMRT. In-field failures (94.1%) represented the main pattern of regional recurrence. Level II and the retropharyngeal area were the most frequent recurrence regions. Out-field failure was rare and usually occurred in the parotid gland region. No recurrences in level Ib were observed; thus, prophylactic irradiation of level Ib may be unnecessary. We also found that N2-3 stage patients had higher risks of developing regional recurrence. Further studies on the management of patients with advanced N stages are needed.

We acknowledge the support of the Department of Radiation Oncology. The views expressed in this publication are those of the authors.