As a crucial event involved in the metastasis and relapse of esophageal cancer, c-Met overexpression has been considered as one of the culprits responsible for the failure in patients who received radiochemotherapy. Since c-Met has been confirmed to be pivotal for cell survival, proliferation and migration, little is known about its impact on the regulation of radiosensitivity in esophageal cancer. The present study investigated the radiosensitization effects of c-Met inhibitor foretinib in ECA-109 and TE-13 cell lines. Foretinib inhibited c-Met signaling in a dose-dependent manner resulting in decreases in the cell viability of ECA-109 and TE-13. Pretreatment with foretinib synergistically prompted cell apoptosis and G2/M arrest induced by irradiation. Moreover, decreases ability of DNA damage repair was also observed. In vivo studies confirmed that the combinatorial use of foretinib with irradiation significantly diminishes tumor burden compared to either treatment alone. The present findings implied a crucial role of c-Met in the modulation of radiosensitization in esophageal cancer, and foretinib increased the radiosensitivity in ECA-109 and TE-13 cells mainly via c-Met signaling, highlighting a novel profile of foretinib as a potential radiosensitizer for the treatment of esophageal cancer.

Esophageal cancer is the eighth most common malignancy and the sixth most common cause of death worldwide (1). While surgery represents the primary modality of treatment, the prognosis and survival for this disease remains poor. Radiotherapy has been a critical treatment option for those unresectable esophageal cancer patients. However, insensitive to radiation contributes to the major restrictive factor for patients occurring treatment failure and reccurence (2, 3). As such, improved modalities of treatment are urgently needed to improve the prognosis and survival for radioresistant esophageal cancer patients.

c-Met, a receptor tyrosine kinase (RTK) encoded by MET gene, mediates cell proliferation, survival, invasion (4, 5). Previous studies by Stommel et al. found that silencing c-Met by using c-Met small interfering RNAs (siRNAs) can attenuate tumor growth (6). Hepatocyte growth factor (HGF) is widely expressed in mesenchymal cells as a ligand of c-Met and aberrant HGF/c-Met axis is known to correlate with tumor growth, metastasis and reccurrence in many malignancies (7). HGF can induce autophosphorylation of c-Met and activate downstream signaling pathways, such as PI3K/Akt and MAPK/Erk pathways (8). c-Met is commonly overexpressed in advanced and metastatic esophageal cancer and plays a critical role in the development and progression of malignances (9). Overexpression of c-Met has been reported to decrease apoptosis and enhance the repair of ionizing radiation induced DNA double-strand breaks (DSBs) (10). High levels of c-Met expression are closely related to poor prognosis and survival (11). As such, inhibition of c-Met expression coupled with radiotherapy may represent a promising option for the treatment of radioresistant esophageal cancer.

Foretinib, an oral receptor tyrosine kinase inhibitor, was demonstrated antitumor activity via inhibiting the phosphorylation of c-Met induced by HGF (12). Foretinib has been reported to block cancer cell proliferation, metastasis, angiogenesis and, most importantly, significantly improve survival of esophageal cancer patients (13). c-Met positive malignances have been reported to be more sensitive to c-Met inhibitor and present better prognosis in several clinical and preclinical trials (14, 15).

In this study we evaluated the effect of foretinib as a radiosensitizer on esophageal squamous carcinoma cells (ESCC) in vitro and in vivo. Furthermore, the potential mechanisms of radiosensitization effect were also studied.

Cell viability of ECA-109 and TE-13 were assessed using the Cell Counting Kit 8 (CCK8) assays. Cells were plated at a density of 5×103 cells/well in 96-well plate and cultured with different concentrations of foretinib for 24h and 48h. 10% CCK8 (Obio Technology) was added to each well and the absorbance was measured at 490 nm.

Cells were seeded into 6-well plates at varying cell densities and cultured with different concentrations of foretinib (0.1 and 0.5 μM). Then cells were irradiated at 0, 2, 4, 6, 8 Gy at 4.5 Gy/min and cultured for another 14 days. Cells were fixed with paraformaldehyde and stained with crystal violet respectively for 1h. Colonies composed of greater than 50 cells were counted.

Cells were plated at a density of 1×105 cells/well in 6-well plate and treated with foretinib or IR after 24h. Annexin V/PI Apoptosis Kit (KeyGENE Biotechnology) was used to detect the apoptosis cells by flow cytometry (BD FACS Calibur).

Cells were divided into one of the following groups: control, foretinib-treatment, IR and combination treatment, and fixed overnight with 75% ice-cold ethanol. Cells were stained with propidium iodide and cell cycle distribution was assessed by flow cytometry (BD FACS Calibur).

Cells were seeded into confocal laser small dishes and harvested at 2, 8, 24h postirradiation with or without foretinib. Cells were subsequently fixed in 4% paraformaldehyde at 4℃ overnight and permeabilized in 0.1% Triton X-100 (Sigma) for 10 min. Thereafter cells were blocked with 5% bovine serum albumin (Gibco) for 1h and incubated with γH2AX antibody overnight at 4℃. Cells were washed with PBS for three times before incubating with an Alexa Fluor 594-conjugated secondary antibody (Jackson ImmunoRearch) for 1h. Cells were treated with DAPI (Beyotime Biotechnology) and visualized using confocal fluorescence microscopy (Leica).

Numerous data were presented as mean ± standard deviation (SD). The t tests and One-way ANOVA were used to demonstrate the difference between different groups. SPSS 19.0 software was performed to statistical analysis and p value less than 0.05 was considered statistically significant.

Foretinib inhibits the proliferation in ECA-109 and TE-13 cells

Clonogenic assays were performed to determine the radiosensitization effect of foretinib on ECA-109 and TE-13 cells. As shown in Fig.1B, foretinib treatment (0.1 and 0.5 μM) combined ionizing radiation significantly shifted the dose-survival curves compared with the control group. The sensitization enhancement ratio (SER) of ECA-109 and TE-13 reached 1.73 and 1.63 respectively when treated with the concentration of 0.5 μM. D0, Dq, SF2 and SER were calculated in Table 1 and these data demonstrated that foretinib significantly resulted in a radiosensitizaiton of ECA-109 and TE-13 cells in vitro.

Radiosensitization effects of Foretinib on ESCC cells in vitro

Foretinib induces the apoptosis in ECA-109 and TE-13 cells

ESCC cells were divided into the following groups: control, foretinib, IR and combination treatment. We evaluated apoptosis by flow cytometry and found that the degree of apoptosis as greatest in the combination treatment group versus the levels observed following foretinib treatment or IR treatment alone (Fig.2B). The results demonstrated that foretinib significantly enhances apoptosis induced by ionizing radiation. The Bcl-2 family consists of anti-apoptosis protein Bcl-2, Bcl-xl and pro-apoptosis protein Bax. Bax plays a crucial role in activating the caspase pathway to induce apoptosis via mitochondrial mechanisms. As shown in Fig.2C, foretinib combined with irradiation resulted in upregulation of Bax and concomitant downregulation of Bcl-2 and Bcl-xl. 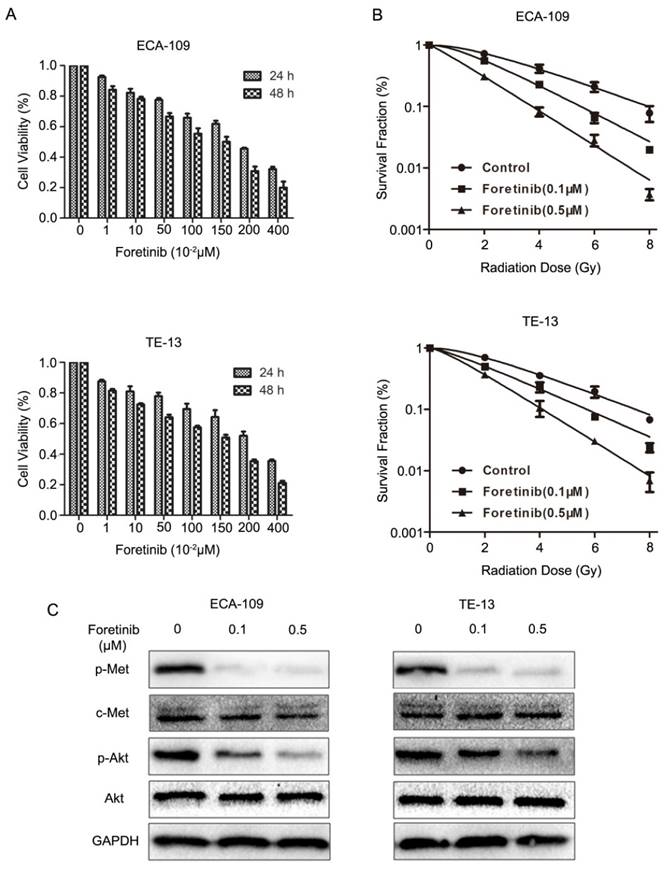 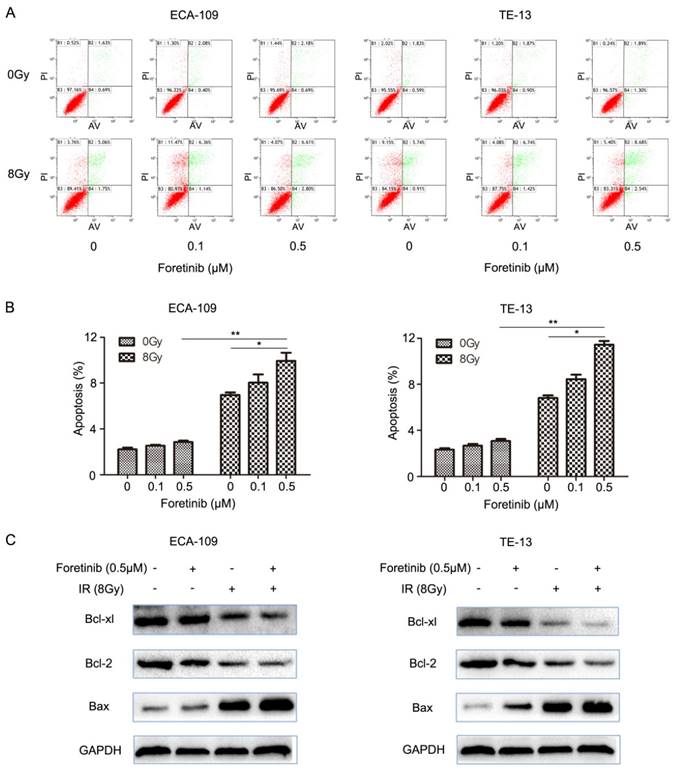 Immunofluorescence was performed to assess DNA double strand breaks repair in ECA-109 and TE-13 cells following irradiation. The average number of γH2AX foci per cell was calculated as a surrogate marker of DNA damage. We measured the number of γH2AX foci at 2, 8 and 24h postirradiation with or without foretinib pretreatment (0.5 μM). As shown in Fig.4, the average number of γH2AX foci in the foretinib pretreatment group was significantly higher than those observed in the control (DMSO) group. These data suggest that inhibition of c-Met phosphorylation results in a delay of DNA double strand breaks repair following irradiation.

Foretinib improves the radiosensitization in xenografts

As shown in Fig.5A, the combinatorial use of foretinib and IR significantly decreased tumor growth. Tumor volume increased at a much slower rate in mice who received combined treatment as compared with the control group (Fig.5B), while tumor weight was significantly lower in the combined group (Fig.5C). Relative tumor proliferation rate T/C (%) was measured to evaluate the anti-tumor activity. The T/C (%) of foretinib, IR and combination treatment respectively was 58.6%, 44.2% and 29% (Fig.5D), while tumor inhibition rates reached 38.5%, 53.4% and 67.2% in foretinib group, IR group and combination treatment group respectively. Furthermore, we calculated the doubling time and absolute growth delay in different treatment groups. As shown in Table 2, foretinib increased the doubling time from 5.7±0.8 days with IR alone to 13.7±1.4 days with combination group, resulting in an enhancement ratio of 3.8. These data demonstrate that foretinib enhanced the radioresponse in an ESCC xenograft model.

Absolute Growth Delay (Days), the doubling tumor time of treatment group minus that of control group; 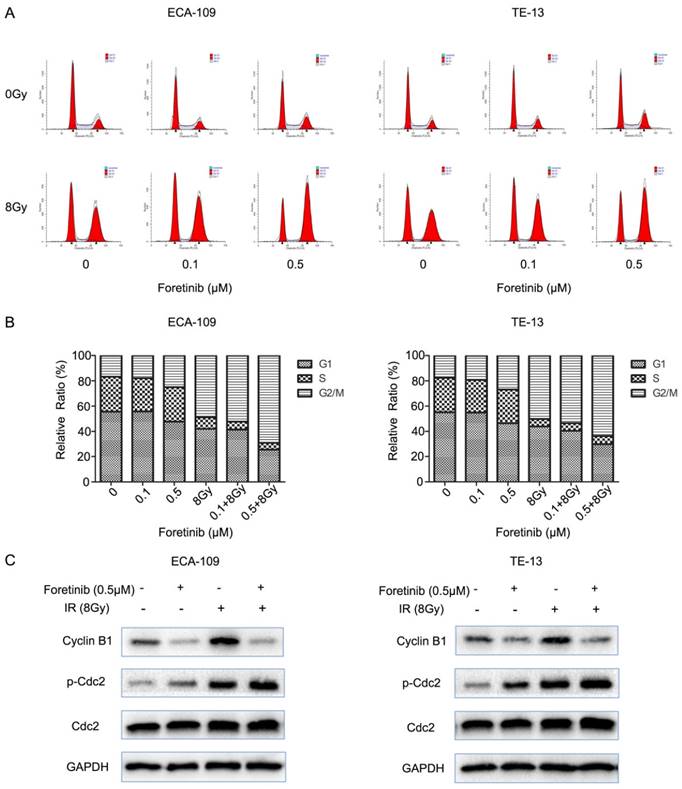 The effect of c-Met inhibitor foretinib on DNA damage repair in ESCC cells. (A) γH2AX foci was evaluated by immunofluorescence. (B) Foretinib treatment group significantly delayed the DNA damage repair compared with control group after irradiation at 2, 8, 24h (*, P<0.05). 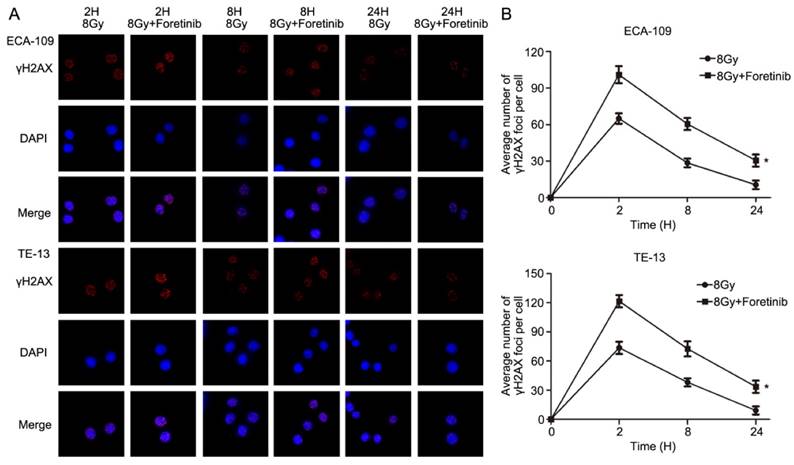 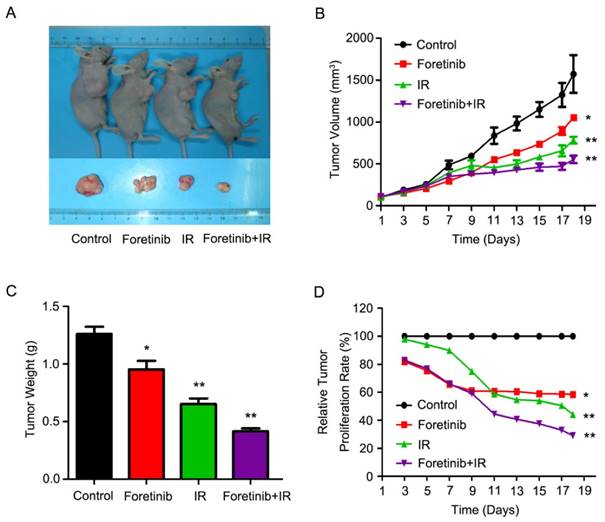 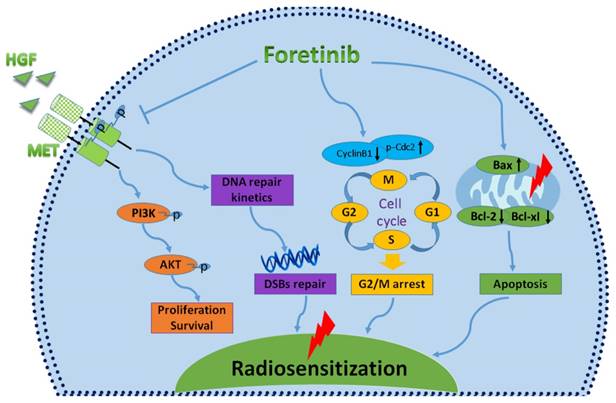 Classical therapeutic strategies for the treatment of esophageal cancer include surgery coupled with radiotherapy and chemotherapy (16). However, chemo/radio-resistance often leads to treatment failure and poor prognosis in many patients (17). Fortunately, molecular therapies have rapidly developed in recent years, targeting aberrantly expressed receptor tyrosine kinases (18-20). HGF/c-Met signaling pathway plays a critical role in chemo- and radioresistance and c-Met has aroused considerable interest as a potential target due to its effects on tumor growth, invasion and metastasis (21, 22). Overexpression and dysregulation of c-Met has been verified tightly related to poor prognosis and survival in advanced esophageal cancer patients (23, 24). In addition, high levels of c-Met were reported to be associated with radiation resistance, activating downstream PI3K/Akt signaling pathway which was also linked to redioresistance (25, 26). Foretinib, a novel receptor tyrosine kinase inhibitor, was reported to significantly inhibit phosphorylation of c-Met and VEGFR-2 resulting in anti-tumor activity (27, 28). Notably, in recent Phase I/II clinical trials, studies have confirmed that foretinib improves the prognosis and the overall survival of patients with c-Met overexpression (29, 30). In the present study, we explored the radiosensitization effects of foretinib on ECA-109 and TE-13 cells and characterized molecular mechanisms of action. To our knowledge, this is the first time that foretinib has been coupled with radiotherapy and investigated as a possible therapeutic approach for the treatment of esophageal cancer.

As shown in Fig.1A, foretinib suppressed the cell viability of ECA-109 and TE-13 cells in a dose-dependent manner. As previously reported, phosphorylation of c-Met can activate PI3K/Akt pathway which has been shown to play a critical role in cell proliferation and survival. We observed that foretinib can inhibit the phosphorylation of c-Met and Akt in both ECA-109 and TE-13 cells (Fig.1C). Zillhardt et al. suggest that the inhibitory role of foretinib on cell growth is linked to changes in cell cycle distribution (31). They demonstrated that foretinib could suppress cell proliferation through G2/M arrest thereby inhibiting mitoses.

Our studies using tumor-bearing xenografts demonstrated that the tumor volume and weight were decreased significantly in the combination treatment group as compared to use of foretinib or IR alone. These data suggest that foretinib could enhance the radiosensitivity of ESCC in vitro and in vivo.

In conclusion, foretinib enhanced the radioresponse of ECA-109 and TE-13 cells to IR through inhibiting phosphorylation of c-Met, inducing accumulation of G2/M phase and delaying DNA double strand breaks repair (Fig.6). This study highlights the promising therapeutic potential of targeting c-Met in patients with chemoradioresistant esophageal cancer patients. Further studies are needed to further characterize the radiosensitive mechanisms of foretinib in esophageal cancer.