Purpose: The objective of study is aiming to investigate the residual tumor rate after Vacuum-assisted Breast Biopsy (VABB) for early breast cancer excision and the efficacy of mammogram and ultrasound in detecting residual tumor.

Methods: Patients who underwent VABB and were confirmed with breast cancer in Sun Yat-sen University Cancer Center from 2010 to 2015 were reviewed retrospectively. The residual tumor rate determined by histological examination was calculated, and then was compared with the results estimated by mammogram and ultrasound which were performed post VABB but before subsequent surgery. Univariate and multivariate analysis (logistic regression) were carried out to identify the independent risk factors associated with residual tumor.

Surgery is one of the main treatments for early breast cancer [1], and modified radical mastectomy and breast conserving surgery (BCS) have remained the standard surgery approaches. However, in recent years, oncoplastic and minimally invasive surgeries for early breast cancer have attracted more attention and played a more and more important role [2-4].

Vacuum-assisted breast biopsy (VABB) device was first developed by Johnson Company of USA in 1994 [5], and had a high biopsy accuracy for lesions impalpable, deep-located and less than 1 cm [6-9]. It has been reported that 14-gauge and 11-gauge probes using the VABB device could respectively obtain more than two and six times biopsy sample weights per specimen than the traditional automated 14-gauge probe [10, 11]. Due to its rich tissue harvesting and less invasive procedure, VABB as a minimally invasive surgery in breast benign tumor excision has been proven to achieve high complete excision rates (90-100%) and few complications by numerous clinical studies [12-15]. However, these complete excision rates were only confirmed by the imaging examination findings without further histological results, because there is no need for subsequently extended surgery if benign disease is present. Thus, the efficacy of mammogram and ultrasound in detecting residual tumor after VABB has not been defined under the guidance of histologically golden standard.

Of note, a part of patients receiving VABB were diagnosed with benign disease by ultrasound and mammogram before treatment, but were finally proven to have malignant tumor by histological findings. Therefore, it would be of great importance to determine whether residual tumor existed after VABB for those patients since they might avoid further surgery if no residual tumor was found. However, to the best of our knowledge, no study to date has reported the residual rate of tumor after VABB or investigated the efficacy of ultrasound and mammogram in detecting the residual tumor compared with histological findings in early breast cancer. Based on this premise, we performed this retrospective cohort study to characterize this issue and help guiding clinical treatment.

We investigated 126 female patients who underwent VABB and were confirmed with breast cancer histologically in Sun Yat-sen University Cancer Center (SYSUCC) from 2010 to 2015. The included patients were diagnosed with breast benign tumor clinically before treatment and received VABB using the EnCor Vacuum Assisted Biopsy System (SenoRx Inc., USA) with a 7-gauge probe. The inclusion criteria were as follows: (I) single suspicious lesion was found by mammogram and ultrasound before VABB; (II) the BI-RADS of mammogram and ultrasound was 3 or 4a, if the BI-RADS between ultrasound and mammogram was inconsistent, then the higher BI-RADS was used; (III) the largest dimension of the lesion was less than 3 cm. Patients with suspicious skin invasion found by mammogram, ultrasound or grossly-viewing and with incomplete information were excluded. The study was approved by the Independent Ethics Committee/Institutional Review Board of SYSUCC and written informed consent about researchable use of the clinical data was obtained from every participant prior to surgery.

Mammogram and ultrasound examinations were ordered for the included patients post VABB but before subsequent surgery to estimate residual tumor status. The images of mammogram and ultrasound were reviewed by a radiologist and an ultrasound doctor respectively. A standard hook wire was placed to localize the residual cavity under guidance of ultrasound. Then patients underwent BCS or mastectomy according to the surgeon's clinical judgment and patients' preference. Any suspicious lesion detected by mammogram, ultrasound or grossly-viewing and the entire surrounding rim of the residual cavity about 1 cm in thickness were resected to block for paraffin sections. Hematoxylin-eosin staining and immunochemical staining were performed for specimen to examine for residual tumor, and the final histological findings would be adopted as the golden standard to calculate residual tumor rate. All the slides from VABB and resection specimens were reviewed by two independent pathologists in SYSUCC without knowledge of patients' mammogram or ultrasound examination findings.

Continuous data, such as age, were described by median and range. Categorical data, such as family history and dominant feature, were described by numbers and percentages. The calculation of sensitivity, specificity, negative predictive value and positive predictive value of mammogram and ultrasound in detecting residual tumor was shown in Table 4. Univariate and multivariate analysis (logistic regression) were carried out to identify the independent risk factors associated with residual tumor. Multivariate analysis was adjusted for covariates of age, dominant feature (mass only or mass with calcification), the largest tumor dimension (≤10mm, 10-20mm or >20mm in size), histological type and lymph node status (negative or positive). A two-tailed P value of <0.05 in logistic regression analysis was considered statistically significant. All the statistical analysis was performed by the SPSS, version 19.0 (SPSS Inc., Chicago, IL, USA).

b No metastatic axillary lymph node.

Residual tumor rate after VABB as a minimally invasive surgery for breast cancer.

* Each covariate adjusted for all others.

Efficacy of mammogram and ultrasound in detecting residual tumor

Efficacy of mammogram and ultrasound in detecting residual tumor. 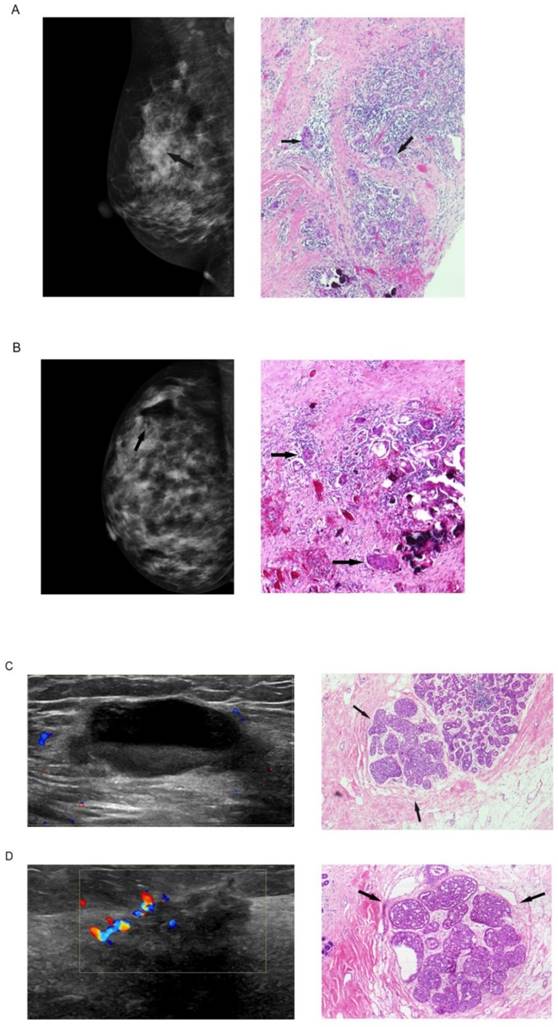 For the last decade, numerous studies about VABB in breast benign tumor excision have been conducted, and the reported complete excision rates of VABB were about 50% to 90% [15-17]. Fine et al [12] observed that the complete excision rates were reversely related to the lesion size, with 94% for lesions < 5mm, 91% for lesions 5 to10mm and 83% for lesions >10mm in size, but we did not observe such a reversely relationship in our study patients. However, as for malignant tumors, the complete excision rates were around 33% to 54.5% [14, 18], similar to the value of 37.3% in our study. The big difference in the complete excision rates between malignant tumors and benign tumors might be caused by the different essential biological characteristic. Malignant tumors have the capability of invasion and metastasis, so they are more likely to spread along the lymphatic vessels, blood vessels and mesenchyme, resulting in a larger invisible range which could not be detected through ultrasound or mammogram. Thus, they could not be completely excised as benign tumors did, because mammogram and ultrasound were less likely to have a truly presentation of tumors with irregular shapes, angular margins and ductal extension [19].

Previous studies suggested that preoperative diagnosis, age, extensive intraductal component, lymphovascular invasion, lobular histology, multifocality and tumor size were related to the risk of positive lumpectomy surgical margins [20-23]. In the current study, we observed a higher residual tumor rate of 81.8% in patients with positive axillary lymph nodes and a lower rate of 42.3% in DCIS, but no significant relationship between age, dominant feature, tumor size, IDC histology, positive axillary lymph node status and risk of residual tumor were observed after the multivariate analysis. Since high residual tumor rates (42.3% - 81.8%) were observed in different subgroups, it is reasonable to speculate that presence of residual tumor might be related to the operative procedure of VABB, but not the clinic-pathological features. Because the diagnosis of breast cancer could not be obtained preoperatively, the excision range would be inadequate if malignant tumors underwent the same operative procedure as benign ones. In addition, VABB was seldom applied in breast cancer excision; this technic still needs exploration and improvement. The residual tumor rate of breast cancer is expected to decrease if larger extent resection is performed with VABB and the margins can be obtained to evaluate the residual tumor status, which requires proof from further studies.

As from mammogram and ultrasound evidence, the complete excision rates after VABB in breast cancer were 76.5% and 73.9%, much higher than the histologically determined complete excision rate of 37.3%. Though their specificities in detecting residual tumor were as high as 90%, the sensitivities were no more than 40%, a bit lower than the reported values from 42.7% to 62% [24-26]. There is no doubt that a positive result of histological examination would be achieved when residual tumor was detected morphologically by mammogram and ultrasound. On the contrary, when residual tumor was present histologically, it could not always be detected morphologically because both mammogram and ultrasound imaging had difficult in accurately identifying lesions less than 5mm [27]. Therefore, it would be inappropriate to estimate the complete excision rates of VABB in breast cancer through morphological findings without further histological examination.

The limitations of this study should be characterized: the data was retrospectively collected from a single center, and the sample may be insufficient since only a small part of patients with breast cancer would choose to receive the VABB. Moreover, VABB was performed by different operators which might result in deviation of surgical outcomes since this operative procedure is highly correlated with the skill of operators. Of note, patients recruited for this study were diagnosed with benign disease based on the findings of ultrasound and mammogram before histological outcomes were available, and all the operators have followed the strategy of benign tumor treatment that resecting all the visible lesions under guidance of ultrasound. Therefore, although different operators may have different skills, this uniform standard could help minimizing the deviation.

In conclusion, our study suggested that VABB as a minimally invasive surgery in breast cancer excision was invalid due to a high residual tumor rate, especially for those with positive axillary lymph nodes. Furthermore, the residual tumor could not be effectively detected by mammogram or ultrasound. Therefore, there is a need for those breast cancer patients who only underwent VABB to receive further extended surgery, even though mammogram or ultrasound indicated no residual tumor. Additional studies of large cohorts are warranted to further confirm our findings.