AIM: The present study was aimed to investigate NKD2 expression as well as promoter methylation and further analyze their clinical significance in patients with acute myeloid leukemia (AML).

METHODS: Real-time quantitative PCR was carried out to detect the pattern of NKD2 expression in 113 AML patients and 24 controls. Real-time quantitative methylation-specific PCR (RQ-MSP) and bisulfite sequencing PCR (BSP) were carried out to detect NKD2 promoter methylation in 101 AML patients and 24 controls with available DNA.

CONCLUSION: Decreased NKD2 expression inactivated by promoter hypermethylation is a common event in AML and is associated with adverse outcome in CN-AML patients.

Acute myeloid leukemia (AML) is a complex cancer characterized by uncontrolled proliferation and apoptosis of abnormal stem cells in the bone marrow (BM) and inhibition in the growth of normal hematopoietic cells [1,2]. The diagnosis of AML mainly depends on the features of morphology, immunology, cytogenetics, and molecular biology (MICM). Despite the advancements in the treatment of leukemia, clinical outcome of AML remains unsatisfactory [3]. Cytogenetic alterations play crucial roles in the pathogenesis of AML and also act as vital biological markers in predicting prognosis for AML [4,5]. However, there are approximately 40% de novo AML patients do not have clonal cytogenetic abnormalities, which was defined as cytogenetically normal AML (CN-AML) [6,7]. Clinical outcome of CN-AML patients is quite heterogeneous from a few days to complete cure. Recently, several molecular biomarkers including NPM1, CEBPA, C-KIT, and FLT3 mutations have provided helpful prognostic information for these patients [8]. Therefore, identifying novel genetic and epigenetic alterations which can recognize the patients who are at the risk of poor outcome is warranted to optimize treatment strategies [9,10].

WNT/β-Catenin signaling pathway plays crucial roles in physiological processes including stem cell maintenance, cell differentiation, migration, apoptosis and proliferation during embryonic development [11,12]. At the same time, abnormal regulation of Wnt/β-catenin signaling pathway also contributes to the development of human cancers including leukemia. Increasing studies have indicated that dysregulated Wnt pathway is associated with leukemogenesis and clinical outcome [13-16]. Overexpression of Wnt/β-catenin pathway genes or loss of Wnt antagonists promotes uncontrolled cell growth and survival [17]. Naked family (NKD1 and NKD2) has been reported to function as a negative regulator of Wnt/β-catenin signaling pathway [18]. NKD binds and inactivates dishevelled, a scaffold protein that transduces the Wnt signal from the frizzled receptor to the destruction complex [19]. Decreased expression of NKD2 caused by its promoter hypermethylation has been increasingly demonstrated in several solid tumors [19-22]. However, the pattern of NKD2 expression and methylation in AML has not been explored yet. Therefore, we focused on the NKD2 expression as well as methylation and their clinical significance in de novo patients with AML in the current study.

A total of 113 patients with a diagnosis of de novo AML including 42 CN-AML were enrolled into the study approved by the Institutional Review Board of the Affiliated People's Hospital of Jiangsu University. The diagnosis and classification of the patients were based on the revised 2008 World Health Organization (WHO) criteria [23]. Clinical features of the patients were showed in Table 1. Treatment protocol for AML patients was described previously [24]. A total of 9 AML patients achieved complete remission (CR) after induction therapy together with 24 healthy donors were also included. Follow-up data was obtained in 94 patients ranging from 1 to 58 months with a median of 7 months. Bone marrow (BM) were collected form all the patients and participants after written informed consents were obtained.

Comparison of clinical manifestations and laboratory features between AML patients with low and high NKD2 expression.

Human leukemic cell line (THP1) was cultured in 1640 medium containing 10% fetal calf serum (ExCell Bio, Shanghai, China) and grown at 37°C in 5% CO2 humidified atmosphere. For epigenetic studies, 5-aza-2'-deoxycytidine (5-aza-dC) (Sigma-Aldrich, Steinheim, USA) diluted in dimethyl sulfoxide (DMSO) was added in three flasks of THP1 cells (at a density of 5×105 cells/ml in 10 ml) once a day at different final concentrations of 0 μM, 2 μM and 4 μM during 3 days. All cells were cultured until harvested for extraction of RNA and DNA.

Statistical analyses were performed using the SPSS 20.0 software package. Mann-Whitney's U test was carried to compare the difference of continuous variables between two groups. Pearson Chi-square analysis or Fisher exact test was employed to compare the difference of categorical variables. Correlation analysis between NKD2 expression and prognosis was performed by Kaplan-Meier curves and Cox regression analysis. Receiver operating characteristic curve (ROC) and area under the ROC curve (AUC) were used to assess the value of NKD2 expression in discriminating AML patients from controls. For all analyses, a two-tailed P<0.05 was defined as statistically significant. 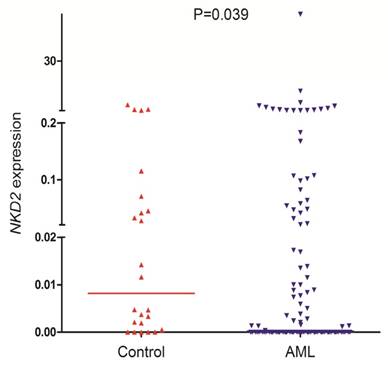 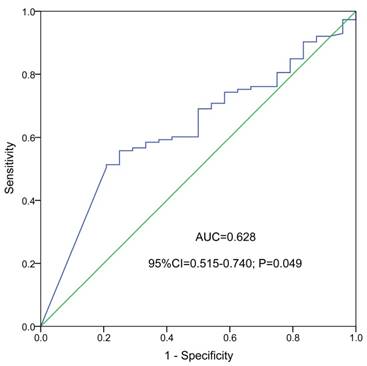 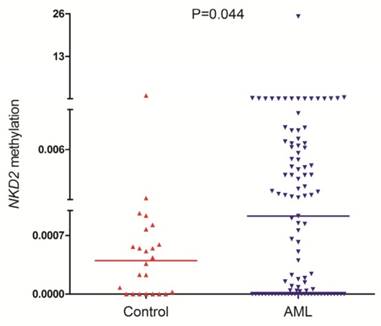 NKD2 expression was regulated by its promoter methylation 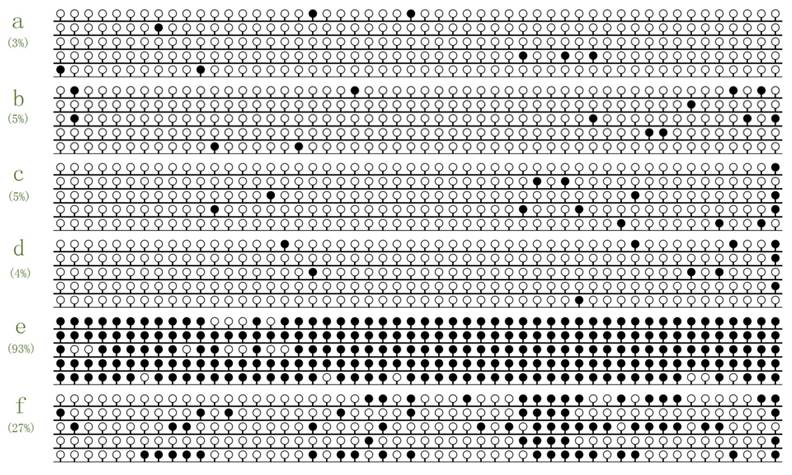 Relationship between NKD2 expression and its promoter methylation in AML patients. 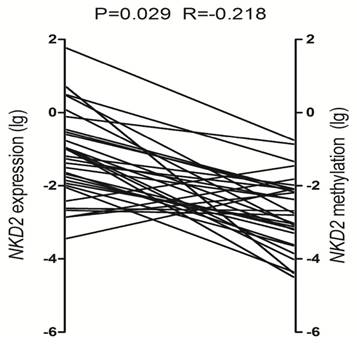 To further investigated whether levels of NKD2 factored in patients' response to therapy, we followed NKD2 expression of 9 patients with AML from the initial diagnosis to CR. Our study revealed that NKD2 showed significantly increased level in post-CR than initial diagnosis in follow-up AML patients (P=0.024, Fig 9).

Univariate and multivariate analyses of prognostic factors for overall survival in CN-AML patients. 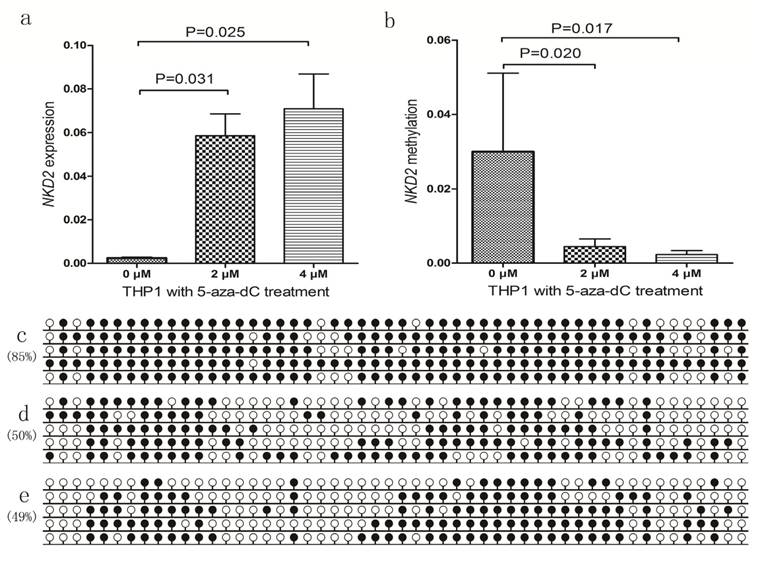 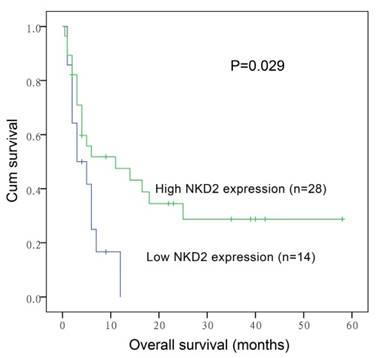 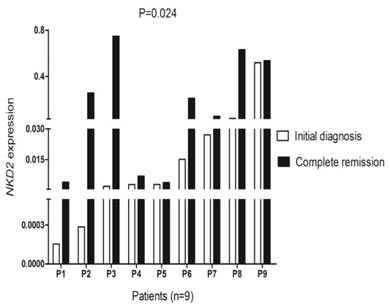 Univariate and multivariate analyses of prognostic factors for leukemia-free survival in CN-AML patients.

The activity of the Wnt pathway is controlled by extracellular and intracellular inhibitors mainly including secreted frizzled-related proteins (SFRPs), dickkopfs (DKK), SRY-box containing gene (SOX), and NKD family [19]. Frequent promoter hypermethylation of Wnt pathway inhibitor genes and their effect on gene expression have been revealed in malignant tumors [19]. Recently, accumulating evidence has revealed the direct role of NKD2 in tumorigenesis. Reduced NKD2 expression is found in osteosarcoma and has a significant role in driving tumor growth and metastasis [33]. NKD2 suppresses breast cancer cell proliferation both in vitro and in vivo and induced G1/S arrest and inhibits Wnt signaling in breast cancer cells [20]. In human gastric cancer, NKD2 restoration suppresses cell proliferation, colony formation, cell invasion and migration, induced G2/M phase arrest, and sensitizes cancer cells to docetaxel [34]. In addition, curcumin significantly upregulated the expression of NKD2 in SW620 colorectal cancer cells and inhibited the proliferation of colorectal cancer cells, resulting in the down-regulation of crucial markers in the Wnt signaling [35]. Zhi Li et al suggested that NKD2 is a direct target of miR-130b, and miR-130b regulated proliferation and apoptosis of osteosarcoma cells by targeting NKD2 and regulating the Wnt signaling [36]. Moreover, long noncoding RNA ZFAS1 repressed underlying targets KLF2 and NKD2 transcription to promote gastric cancer cells proliferation by interacting with EZH2 and LSD1/CoREST [37]. Our previous studies have disclosed that SOX17 and SRFP1/2 expression was down-regulated in AML and low SOX17 expression was associated with adverse prognosis in CN-AML patients [38-40]. Additionally, decreased SFRP1 expression was found more frequently in the less well differentiated subgroups of AML and is associated with NPM1 mutation in AML [39], whereas reduced SFRP2 expression was correlated with intermediate/poor karyotypes in AML [40]. As far as we know, this is the first report about NKD2 expression and its clinical significance in patients with AML.

In this study, we observed that down-regulation of NKD2 expression was a frequent event in AML patients, which indicates that NKD2 might act as tumor suppressor role as well in leukemogenesis. Obviously, function studies of NKD2 in leukemia are needed to support our results. Although no significant associations were observed between NKD2 expression and laboratory features as well as common gene mutations, survival analyses revealed that low NKD2 expression were associated with shorter OS and LFS among CN-AML patients. Notably, dynamic monitoring the level of NKD2 in 9 cases of patients illustrated that NKD2 were significantly increased from the initial diagnosis to CR by mentioned therapeutic protocols. In recent years, clinical significance of NKD2 expression has been increasingly investigated in various human cancers. Zhao et al demonstrated that decreased expression of NKD2 was associated with a significantly worse OS in human osteosarcoma tumors [33]. These results together indicated that NKD2 expression was a valuable predictor in assessing treatment outcome as well as status, and might serve as a criterion for the therapeutic evaluation in AML.

All in all, decreased NKD2 expression inactivated by promotor hypermethylation is a common event in AML and is associated with adverse outcome in CN-AML patients.