Changes in Disease Failure Risk of Nasopharyngeal Carcinoma over Time: Analysis of 749 Patients with Long-Term Follow-Up

Background: The changes in the risk of disease failure over time in nasopharyngeal carcinoma (NPC) remains unknown.

Methods: We analyzed 749 patients treated with intensity-modulated radiotherapy in a single center. The annual hazard rates of disease failure (recurrence or death from any cause) were estimated using the life-table method.

Results: In total, 41 (5.5%), 22 (2.9%) and 129 (17.2%) patients developed local, regional and distant recurrences, respectively; 149 (19.9%) patients died. Of the 600 patients who were alive at the last follow-up, 496 (82.7%) had follow-up times longer than 6 years. The 6-year failure-free survival rate was 74.8%. Older age (> 50 years) and advanced stage (Ⅲ-ⅣB) were independent risk factors for disease failure in multivariate analysis. The hazard curve for failure risk in the whole cohort showed a sharp peak at 2 years, changed to a gradually decreasing plateau between years 3 and 5 and then declined sharply. Subgroup analyses revealed similar hazard curves in both sexes. However, the patterns of hazard curve significantly differed between high-risk (> 50 years or stage Ⅲ-ⅣB) and low-risk (≤ 50 years or stage Ⅰ-Ⅱ) patients.

Interpretation: The failure hazard rate in NPC didn't decline in a linear manner, but displayed a sharp peak at 2 years. The patterns of hazard function significantly differed between patients with different age and stage. Further studies are warranted to confirm our results.

In the field of oncology, the predominant way of reporting outcome is survival curves. A survival curve describes the cumulative event-free time distribution at a given time point after diagnosis or accrual in clinical trials. However, it does not give direct information regarding changes in event probability over time. Such information is highlighted using the hazard function, which provides the event incidence rate at any instant among survivors up to that point in time. It is also known as the conditional failure rate or time-specific mortality rate. The time distribution of failure risk has been best studied in breast cancer, and this has provided meaningful insights into tumor biology and shed light on the clinical management of breast cancer.[1-5]

Nasopharyngeal carcinoma (NPC) is prevalent in southern China, Southeast Asia, North Africa, the Middle East and Alaska.[6, 7] Radiotherapy with or without chemotherapy is the primary treatment for NPC. The long-term failure-free survival (FFS) rate in NPC has been estimated to be 67%-79%.[8, 9] To the best of our knowledge, no study has investigated the change in failure risk over time in NPC. Thus, the aim of this study was to analyze the hazard function of disease failure in a large cohort of NPC patients who underwent long-term follow-up.

We retrospectively reviewed the records of all 749 newly diagnosed, biopsy-proven, non-metastatic (stage I-IVB) NPC patients who were treated with intensity-modulated radiotherapy (IMRT) at our center between January 2003 and December 2007. The clinical features of these patients are shown in Table 1.

Clinical features of the 749 nasopharyngeal carcinoma patients in the study.

†According to the 7th Union for International Cancer Control/American Joint Committee on Cancer staging system.

All patients completed a pretreatment evaluation including complete patient history, physical examination, hematology and biochemistry profiles, nasopharynx and neck magnetic resonance imaging (MRI), chest radiography, abdominal ultrasonography and single photon emission computed tomography whole-body bone scan. Positron-emission tomography/computed tomography (PET/CT) was performed in 162 of the 749 patients (21.6%). All patients were restaged according to the 7th Union for International Cancer Control/American Joint Committee on Cancer (UICC/AJCC) staging system.[10] The study was performed after the ethical approval from Institutional Review Board of Sun Yat-sen University Cancer Center. Informed consent was obtained from each patient for their consent to have their information used in research without affecting their treatment option or violating their privacy.

All patients underwent radical radiation therapy. The nasopharyngeal and upper neck target volumes were treated using IMRT for the entire treatment course. The lower neck was treated with a conventional anterior or anteroposterior opposing cervical technique. Further details of the IMRT techniques used at our center have been reported previously.[11]

Patients attended follow-up visits every 2-3 months during the first 2 years; every 3-6 months during years 3-5 and annually thereafter or until death. Fiberoptic endoscopy, CT or MRI scans of the head and neck were performed every 3 months during the first year and annually during years 2-5. All local relapses were diagnosed by fiberoptic endoscopy and biopsy or CT/MRI of the nasopharynx and skull base. Regional recurrences were diagnosed by fine needle aspiration, CT/MRI or pathological examination after surgery. Distant metastases were diagnosed on the basis of clinical symptoms and the findings of physical examinations and imaging studies, including chest X-ray, bone scan, MRI, CT and abdominal sonography. Additional tests were ordered whenever necessary.

FFS was considered as the time elapsed from the first day of treatment to the date of disease failure, defined as locoregional or distant recurrence or death from any cause, whichever occurred first; the time was censored at the date of the last follow-up evaluation. Actuarial rates were estimated by the Kaplan-Meier method, and survival curves were compared using the log-rank test.[12] Multivariate analyses with the Cox proportional hazards model were used to test for independent significance by backward elimination of insignificant explanatory variables.[13] The failure risk over time was studied by using the life-table method to estimate the annual failure hazard rate, i.e., the conditional probability of manifesting disease failure in a year given that the patient is clinically free of any failure at the beginning of the year.

The criterion for statistical significance was set at α < 0.05. All P values were based on two-sided tests. We used Statistical Product and Service Solutions (SPSS) version 20.0 (IBM Corporation, Armonk, NY, USA) to perform modeling and statistical calculations.

Follow-up and patterns of disease failure

On univariate analysis, the 6-year FFS was found to be significantly poorer in patients older than 50 years than in patients younger than 50 years (65.7% vs. 78.0%, P < 0.001). Inferior 6-year FFS was also observed in patients with advanced stage disease (stage Ⅲ-ⅣB vs. stage Ⅰ-Ⅱ, 66.0% vs. 91.7%, P < 0.001). In contrast, sex and pathological type were not significant prognostic factors (P = 0.401 and 0.938, respectively). Multivariate analysis incorporating host factors (i.e., age, sex), tumor factors (i.e., stage) and therapeutic intervention (i.e., radiotherapy alone or chemoradiotherapy) confirmed that age and stage were independent prognostic factors for FFS (P < 0.001 for both).

The hazard curve for disease failure in the whole cohort peaked at 2 years, changed to a slowly decreasing plateau between 3 and 5 years and then declined sharply (Figure 1). Then we conducted subgroup analyses according to various clinical features. The hazard curve was similar in both sexes, but exhibited more pronounced variations in female patients (Figure 2A). Interestingly, the hazard curve displayed different patterns in patients with different ages (Figure 2B). In patients older than 50 years, the hazard curve had two peaks. The first peak occurred at 2 years, and the second peak between 4 and 5 years. In patients under the age of 50, the hazard rate was much lower and lacked a sharp peak. Analysis of the graphs in early (stage Ⅰ-Ⅱ) and locoregionally advanced (stage Ⅲ-ⅣB) disease showed that the hazard function in the whole cohort was dominated by that in patients with locoregionally advanced disease (Figure 2C). The hazard rate in patients with early disease was less than 2.5% during the 6 years of follow-up.

Patterns of disease failure over time in patients with nasopharyngeal carcinoma.

* Disease failure was defined as locoregional or distant recurrence or death from any cause. 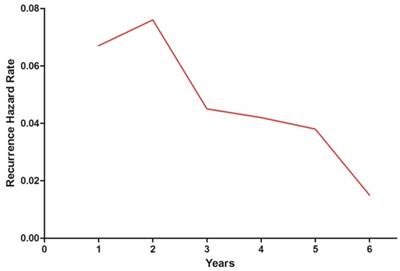 Annual hazard rates for disease failure in nasopharyngeal carcinoma stratified by sex (A), age (B) and stage (C). 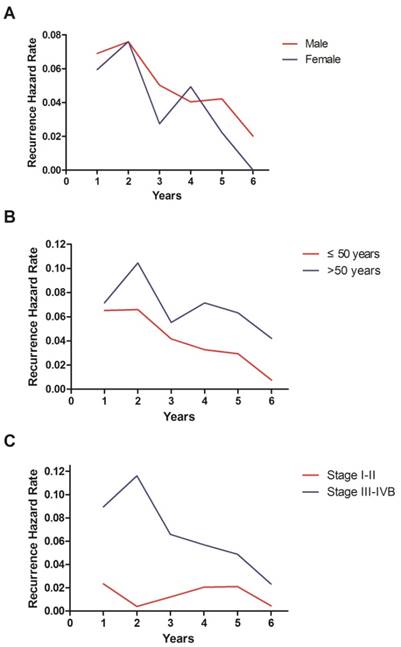 In this study, we analyzed the change in failure risk over time in NPC patients and found a counterintuitive pattern of hazard function. The NPC failure hazard rate did not decline in a linear manner, but showed a sharp peak at 2 years. This phenomenon challenges the explanation obtained by classical Gompertzian or exponential kinetics of tumor growth, but may be explained by the tumor dormancy hypothesis. According to this hypothesis, microscopic tumor foci may be in different biological steady states and do not lead to tumor growth (e.g. a balance of cell death and division) in the absence of growth factors or in the presence of anti-angiogenic factors.[14-16]

Research has shown that surgery to remove tumors may also remove sources of angiogenesis inhibitors or lead to the appearance of growth factors in circulation in response to surgical wounding, which may terminate the dormancy of the tumor foci and result in accelerated recurrences.[17, 18] Our results suggested that the tumor dormancy-reactivation hypothesis might be applicable to NPC. [19, 20] However, this hypothesis needs to be tested in future studies.

Besides the theoretical value, our results are of clinical importance at two levels. First, the understanding of the time distribution of failure risk could help oncologists to design more appropriate follow-up strategies. For example, we showed that the failure risk in patients with early disease (stage Ⅰ-Ⅱ) was lower than 2.5% during the first 6 years of follow-up. This raised the question of whether it is reasonable to use the same intensive follow-up strategy in patients with early and locoregionally advanced disease. Second, the hazard rate of NPC varies over time, suggesting that the biological mechanisms responsible for early and late disease failures differ and may therefore respond differently to the same treatment. For example, Berry et al. have analyzed the data of 6,644 patients from three randomized trials coordinated by Cancer and Leukemia Group B, and revealed that high-dose versus low-dose adjuvant chemotherapy reduced the risk of recurrence or death by 55% in the first year and 30% in the second year, with no advantage after 3 years.[22] Researchers have proposed that we should take into account the time-dependent effects of adjuvant therapy in breast cancer.[4] Similarly, the effects of therapy might also vary over time in NPC, and this possibility needs to be confirmed in future studies.

In this study, we only analyzed the hazard function during 6 years of follow-up, since 82.7% of live patients had been followed up for longer than 6 years. Although we can calculate the hazard rate beyond 6 years, we consider that possible bias would influence the interpretation of the results due to inadequate follow-up. We intend to update our results in the future after ten years of follow-up.

In conclusion, the hazard rate of disease failure did not decline in a linear manner over time, but displayed a sharp peak at 2 years, changed to a gradually decreasing plateau between years 3 and 5 and then declined sharply. Older age (> 50 years) and advanced stage (stage Ⅲ-ⅣB) were independent risk factors for disease failure in NPC. The patterns of hazard function significantly differed between patients with different age and stage. Understanding the underlying mechanism of the time distribution of failure risk would help develop more effective treatment and follow-up strategies for NPC.