Background: The bones are the most common site of distant metastasis in nasopharyngeal carcinoma (NPC). Few prognostic markers are available to guide treatment and sub-classify patients with bone metastasis. We aimed to identify the prognostic value of pretreatment serum alkaline phosphatase (ALP) and plasma Epstein-Barr virus DNA (EBV DNA) in patients with bone-only metastasis.

Nasopharyngeal carcinoma (NPC) is a malignancy that is disproportionally common in eastern Asia, with the highest incidence of approximately 20 per 100,000 people per year observed among the Cantonese population in the South of China [1, 2]. A recent epidemiological analysis reported NPC was related to district, age, gender, diet, lifestyle, Epstein-Barr virus (EBV) infection, genetic factors and even the type of dialect in China [3]. As it has a complicated anatomical localization, NPC is considered surgically unresectable, but is sensitive to radiotherapy and chemotherapy. Combination of radiotherapy and chemotherapy has been proven to provide survival benefits for patients with advanced stage NPC [4]. In combination with developments in radiotherapy technology and imaging modalities, these therapeutic improvements have led to a reduction in mortality among patients with NPC since the peak value of 1.45/105 in 2002 [5] .

Approximately 15-19% of all patients with NPC develop distant metastasis [6]. NPC frequently presents as metastatic disease, with a propensity for metastasizing to bone. The bones account for 50% cases of metastasis, and metastasis to bone is associated with a poor prognosis and survival outcomes [7]. At present, the selection of radio- and/or chemotherapeutic treatments for NPC are generally based on the characteristics of the primary tumor [8]. However, the current TNM staging system possesses a number of flaws, as patients with the same TNM stage display different clinical behaviors and achieve varied treatment responses and outcomes [9]. Despite the relative unreliability of the current TNM staging system, there is a lack of related research and the prognostic value of clinicopathological factors, risk assessment of different cases and the role of combined treatment in patients with bone metastasis have not been systematically defined and explored.

Currently, there is much interest in discovering prognostic markers that may help to discriminate patients and guide effective therapeutic strategies [10, 11].

However, the identification of reliable biomarkers associated with prognosis is a continuous challenge. Surely, there have existed some studies about the prognostic value of ALP in the patients with NPC [12] and metastastic NPC [13].

Therefore, the aim of this study was to investigate the prognostic value of serum alkaline phosphatase (ALP) and plasma Epstein-Barr virus DNA (EBV DNA) in patients with bone-only metastatic NPC in order to assist individual treatment decision-making for patients with M1 stage NPC.

Between March 2004 and October 2013, the medical records of 2,685 patients with newly-diagnosed NPC who received therapy at Sun Yat-sen University Cancer Center (SYSUCC), China, were retrospectively reviewed. Prior patient consent and approval from the Institutional Review Board of SYSUCC were obtained for the review of clinical data for research purposes. We only included patients who underwent skeletal scintigraphy and 18F-FDG PET so that metastases at diagnosis would not be missed. Patients lacking complete records on clinical and hematological variables and follow-up data were excluded. Overall, the 272/2685 (10.1%) patients who developed bone metastasis after primary treatment (not including patients with bone metastasis at first diagnosis) were included in this analysis.

After diagnosis of bone metastasis, we developed a treatment plan based on the general status of the patient and their illness. Treatment modalities for bone metastasis varied depending on the metastatic time order, site and number of metastases. Radiotherapy was prescribed for localized bone metastatic lesions to cure or relieve pain; chemotherapy was added for palliative purposes. The radiotherapy doses/fractions and chemotherapy regimens were selected individually for each patient. In our study, the salvage radiotherapy technique for all patients were intensity modulated radiotherapy (IMRT), and with a dose of 30Gy/10Fractions. Chemotherapy was the primary treatment, the most widely-used regimen was platins (cisplatin, carboplatin) or platins in association with docetaxel, paclitaxel or gemcitabine. The number of chemotherapy cycles was based on the patient's physical condition. In total, 120/272 (44.1%) patients received systemic chemotherapy only to treat bone metastases; 100 (36.8%) chemoradiotherapy; 35 (12.9%) local radiotherapy only; and 17 (6.2%) symptomatic therapy only.

Follow-up evaluations were performed every 3 months within the first 3 years, 6 months for the following 2 years and annually thereafter until death. The follow-up duration was calculated from the first day of therapy to the day of death or last examination. The last follow-up time was May, 2016. The study end-point was overall survival (OS), defined as the time from the date of first diagnosis to the date of death or last known date alive. Disease-free interval (DFI) was measured as the duration between the end of primary treatment and the date of first diagnosis of bone-only metastasis, which was diagnosed based on symptoms and a bone scan.

Baseline characteristics of the 272 patients with nasopharyngeal cancer

Abbreviations: T = tumor; N = node; †) According to the 7th edition of the AJCC/UICC staging system.

Kaplan-Meier overall survival curves for the 272 patients with nasopharyngeal cancer stratified by (A) pretreatment serum ALP and (B) pretreatment plasma EBV DNA.

Association between clinical variables and DFI and univariate analysis 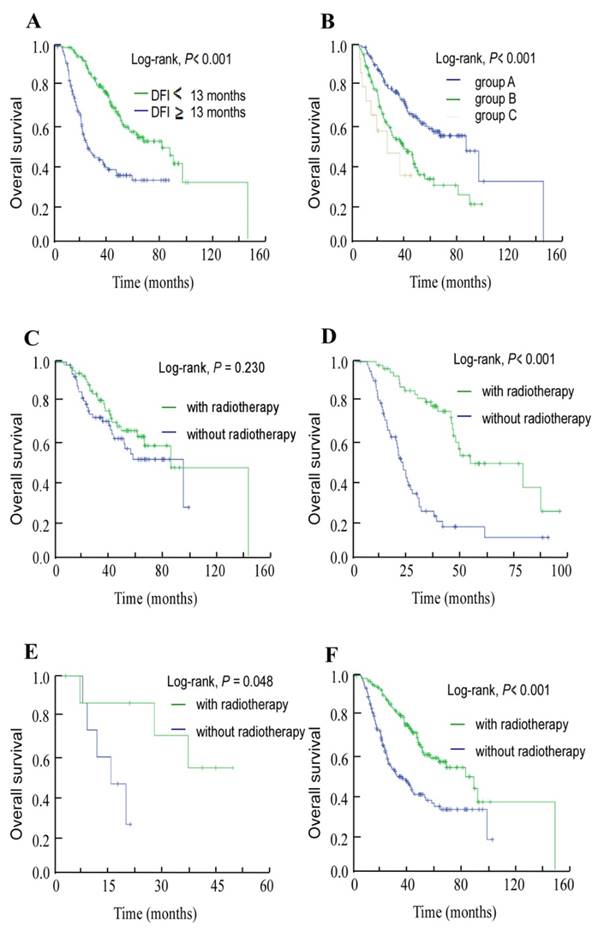 It has been previously reported that patients with NPC have a high incidence of early bone metastasis, with the spine being the most common site of skeletal metastasis, accounting for 66.0% (of 206 cases) [16]. In this cohort, spinal involvement was associated with poorer OS (HR, 1.997, 95% CI 1.199-2.467, P = 0.001). These results are similar to a previous study (HR: 1.91; 95% CI: 1.33-2.74) [11]. It is well-recognized that the diagnostic ability of imaging for early bone metastatic lesions is far from sensitive, especially when the tumor cells are mainly confined to the bone marrow [17]. In this study, patients were diagnosed with bone metastasis via a number of imaging technologies, each of which have disadvantages: bone scans have a low specificity and high false-positive rate, CT requires the use of radioisotopes, PET/CT is expensive and MRI also suffers from limitations include partial-volume effects. Moreover, skeletal-related events (SREs) occur non-specifically: one study reported that 12.1% of patients with bone metastasis did not have SREs [18]. Thus, the imaging technologies employed for diagnosis of bone metastasis have inherent limitations that may lead to a delay in diagnosis, especially in patients without the symptoms of SREs.

In recent years, a number of serum markers have been reported to have prognostic value in patients with NPC and bone metastasis, including lactic dehydrogenase (LDH) and ALP.

Elevated serum ALP has been associated with the presence of bone, liver and other diseases [19]. ALP is divided into four isozymes named after the site of tissue expression: intestinal ALP, placental ALP, germ cell ALP and liver/bone/kidney ALP [20]. Although these ALPs are present in many tissues and have been investigated for a number of years, relatively little is known about their functions. ALP is a by-product of osteoblast activity, which is related to bone metabolism; therefore, elevated ALP indicates that bone formation could be occurring. Metabolic disorders of bone disease contribute to ALP elevation [21, 22]. However, elevated ALP can be due to diseases in several other organs. Therefore, we excluded patients who presented evidence of diseases known to cause abnormal ALP levels. A recent review explored the impact of serum ALP on the clinical response and survival outcomes of patients with skeletal metastases in NPC [13]. Likewise, our results confirmed high serum ALP level before treatment predicted poor OS in patients with NPC who developed bone-only metastasis (HR 1.720, 95% CI 1.199-2.467, P = 0.003).

Clinical use of EBV in NPC continues to increase, with quantitative analyses of circulating EBV DNA used for population screening, prognostication and disease surveillance [23]. At present, randomized trials are in progress to investigate the role of EBV DNA in order to stratify patients for tailored treatment. Patients with high plasma EBV DNA require more intense treatment [24, 25]. However, the prognostic value of EBV DNA in patients with bone-only metastasis has not been explored. Thus, we preformed stratified analysis by pretreatment EBV DNA. ROC curve analysis for OS determined the cut-off value for EBV DNA should be 6,750 copies ml-1, which is much higher than that of the previously published cut-off values selected for analysis in patients with non-metastatic NPC treated in our department [26, 27]. According to our mutilvariate analysis, pretreatment plasma EBV DNA were independent prognostic factors for OS (HR 1.635, 95% CI 1.131-2.363, P = 0.009) in patients with skeletal metastasis.

One limitation of this study that cannot be neglected is that the application of various adjuvant therapeutic methods may confuse the results; and moreover, the varied therapeutic protocols may also have led to diverse survival outcomes. Thus, randomized studies are necessary to authenticate the prognostic value of pretreatment serum ALP and pretreatment plasma EBV DNA, confirm the survival benefit of locoregional radiotherapy in patients with NPC who develop bone-only metastases, and further exploration of adjuvant therapies is warranted. Additionally, the quality of life of patients with metastatic NPC has received little investigation, and any future research to validate this study should consider the effect of such treatments on the patients' quality of life.

Several prognostic factors for OS were identified for patients with NPC who developed bone-only metastases. Using pretreatment serum ALP and plasma EBV DNA, as well as other clinicopathological factors, patients with bone-only metastases can be more effectively stratified into risk groups to guide individualized treatment. Additionally, radiotherapy after metastasis significantly improved OS, especially in patients with high pretreatment serum ALP and/or plasma EBV DNA, and radiotherapy after metastasis was an independent significant prognostic factor for OS.

This work was supported by the Natural Science Foundation of Guangdong Province, China [No. 2016A020215083]. The funding agency had no role in the study design, data collection and analysis, decision to publish, or preparation of the manuscript.

8. Greene FL, Sobin LH. The staging of cancer: a retrospective and prospective appraisal. CA: a cancer journal for clinicians. 2008;58:180-90