Background: The purpose of this observational study was to evaluate the prognostic significance of the pre-treatment plasma fibrinogen level for survival outcomes in nasopharyngeal carcinoma (NPC).

Methods: A total of 998 patients with NPC treated at a single centre in China were retrospectively enrolled, of whom 182 (18.2%) developed distant metastasis during follow-up. Survival analyses were performed by the Kaplan-Meier method and Cox regression modelling to measure 3-year overall survival (OS) and distant metastasis-free survival (DMFS).

Conclusions: This study suggests the pre-treatment plasma fibrinogen level may serve as an independent prognostic marker to predict the survival outcomes of patients with NPC, including patients with metastatic disease.

Nasopharyngeal carcinoma (NPC) is endemic among the populations of Southern China and Southeast Asia; these regions have the highest prevalence of NPC worldwide [1, 2]. It was recently reported that NPC is related to the geographical district, age, gender, diet, lifestyle, Epstein-Barr virus (EBV) infection, genetic factors, and even the type of dialect in China [3].

The therapeutic options for NPC have recently improved. Surgery is not usually possible because of the complex anatomical localization; however, NPC is sensitive to radiotherapy and chemotherapy. Due to the dose superiority of intensity-modulated radiotherapy (IMRT) compared to 2-dimensional radiotherapy (2D-RT), excellent locoregional control can now be achieved in NPC, even in locoregionally advanced disease, with a relatively low incidence of severe complications [4]. Consequently, IMRT has replaced 2D-RT as the primary treatment for non-disseminated NPC.IMRT alone is applied as a radical treatment for early stage NPC, whereas concurrent chemoradiotherapy (CCRT) with or without neoadjuvant chemotherapy (NACT) or adjuvant chemotherapy (ACT) is suggested for locoregionally advanced NPC in the National Comprehensive Cancer Network (NCCN) guideline.

As a result of the above-mentioned therapeutic improvements, the mortality rates for NPC peaked at 1.45/105 cases in the year 2002 and have decreased gradually since [5]. However, the improvements in locoregional control have not been accompanied by an increase in long-term overall survival. Moreover, in patients receiving IMRT, distant metastasis (DM) has become the predominant failure pattern [6-9].

The current TNM staging system for NPC currently possesses a number of limitations as it does not reflect tumor heterogeneity, and patients with the same TNM stage exhibit different clinical behaviours and achieve varied treatment responses and outcomes [10]. Therefore, there is currently much interest in identifying prognostic markers that would improve patient discrimination and guide the design and selection of more effective therapeutic strategies. However the identification of appropriate biomarkers remains a complex challenge.

Accumulating evidence suggests that activation of the blood coagulation system affects tumor cells and is closely related to the development, growth and metastasis of cancer [11]. Coagulation abnormalities have been associated with poor survival in patients with cancer [12, 13]. Of the numerous haemostatic factors, plasma fibrinogen has been reported to be synthesized and overexpressed in human tumor cells. Fibrinogen is a key glycoprotein that functions as a non-specific acute-phase reactant and plays roles in the coagulation pathway, clot formation and wound healing [14, 15]. High fibrinogen level has been associated with various human malignancies, including colon [16], pancreatic [17] and renal cancer [18]. However, the role of fibrinogen in NPC remains unclear, especially in patients with metastatic disease.

The principal eligibility criteria for this retrospective study were: (1) biopsy-proven, undifferentiated, non-keratinising squamous cell carcinoma; (2) no sign of metastasis at diagnosis and no history of previous anti-cancer therapy; (3) age ≥ 18 years old; (4) adequate hematologic, renal and hepatic function, with no history of venous thrombosis or anticoagulation therapy during the 3 months before treatment; and (5) complete follow-up data. In total, 998 patients with newly-diagnosed, non-metastatic NPC treated at Sun Yat-sen University Cancer Center, China, between January 2010 and October 2013 were retrospectively analyzed. This study was approved by the Research Ethics Committee of Sun Yat-sen University Cancer Center. Informed consent was obtained from all patients.

All patients received primary curative-intent treatment according to the NCCN guidelines [19]. Concurrent chemoradiotherapy with or without neoadjuvant chemotherapy or adjuvant chemotherapy was administered for advanced-stage NPC (stage III-IVB), radiotherapy was administered for early-stage NPC or the patients with advanced-stage disease in poor health who could not tolerate the combined therapy.

All patients received radical IMRT. The cumulative radiation doses prescribed were 66-72 Gy at 2.12-2.43 Gy/fractions to the gross tumour volume of the nasopharynx (GTVnx), 64-70 Gy to the positive cervical lymph nodes (GTVnd), 60-63 Gy to the high-risk clinical target volume (CTV1) and 54-56 Gy to the low-risk clinical target volume (CTV2). Radiotherapy was completed within approximately 7 weeks. The doses received by each organ at risk (OAR) were limited according to the dose tolerances of the RTOG 0225 protocol [20], with dose reductions applied as far as possible without sacrificing the tumor target coverage.

The most common first-line chemotherapy were platin-based strategies alone (cisplatin, carboplatin) or platins in association with docetaxel, paclitaxel, gemcitabine or capecitabine with or without 5-fluorouracil. Neoadjuvant chemotherapy was 80 mg/m2 cisplatin on day 1 and 4.0 g/m2 5-fluorouracil as a 72 hours continuous intravenous infusion every 3 weeks for two or three cycles. Concurrent chemotherapy consisted of intravenous cisplatin (40 mg/ m2/day) given weekly or (80 mg/ m2/day) on weeks 1, 4 and 7 of radiotherapy.

In patients with metastasis at diagnosis, the main treatment modality was chemotherapy. Radiotherapy was always prescribed for localized metastatic lesions to cure or relieve pain; targeted therapy was also added for palliative purposes. The choice of therapy was individualized, based on each patient's characteristics including their performance status, treatment expectations, financial resources, etc.

Summary of the clinicopathological features of the 998 patients with nasopharyngeal carcinoma.

Kaplan-Meier overall survival (A) and distant metastasis-free survival (B) curves for all 998 patients with NPC stratified by pre-treatment plasma fibrinogen level (≥ 3.345 g/L vs. < 3.345 g/L).

Multivariate analysis of prognostic factors in the 998 patients with nasopharyngeal carcinoma. 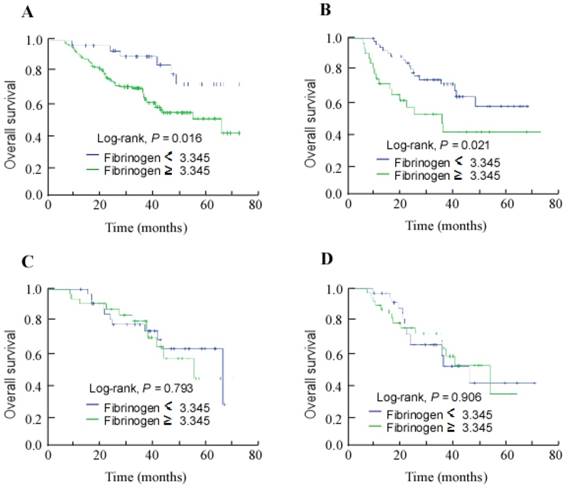 Gao et al. reported that an increased platelet count was associated with distant metastasis in NPC [26]. Fibrinogen is the predominant coagulation factor in blood plasma and promotes platelet aggregation and formation of fibrin [27]. Fibrin remodelling has been confirmed to play a crucial role in the formation of new vessels, which promotes metastasis [28]. Under the circumstances of hypercoagulability, fibrinogen is deposited in the extracellular matrix, binds to fibroblast growth factors or vascular endothelial cell growth factors, and thereby promotes cellular adhesion, proliferation and migration [29, 30]. These processes enable malignant cells to leave the primary tumor, migrate into the lymphovascular and circulatory systems, and establish a new blood supply in order to survive at the site of metastasis [31]. Verheul et al. [32] demonstrated that vascular endothelial cell growth factor (VEGF), a marker of angiogenesis, was expressed in all renal cell carcinoma (RCC) specimens examined using immunohistochemistry, and fibrinogen was detected close to blood vessels in 84% of these RCC specimens. More importantly, Verheul et al. reported that fibrinogen expression adjacent to tumor cells was independently related to VEGF expression in multivariate analysis. Thus, these data provide evidence of an interaction between angiogenesis and tumor cells and the presence of fibrinogen. On this basis, several groups have recently investigated the relationship between high plasma fibrinogen levels and the clinical features and survival of patients with cancer. The use of therapeutic anti-angiogenic agents has become a popular cancer treatment, and targeting VEGF has become an integral component of the treatment regimens for many types of cancer [33]. Therefore, Phase III studies involving large numbers of patients with adequate follow-up are required to confirm the association between plasma fibrinogen and the outcomes of patients with NPC, and also to determine whether plasma fibrinogen can be used to predict the response to anti-angiogenic therapy. Such studies would help to validate the prognostic value of fibrinogen in NPC, and may provide additional insight into potential therapeutic targets for NPC.

We hope this study will provide a basis for the future direction of clinical strategies for NPC. Firstly, further studies are necessary to explore whether the threshold for initiating targeted interventions should be lowered for patients with a high pre-treatment plasma fibrinogen level, and to assess whether these patients benefit from anti-coagulative agents to reduce the risk of metastasis or thromboembolic events. Moreover, collecting plasma samples from patients and monitoring fibrinogen levels during follow-up in a longitudinal study would help to clarify the effect of treatment on the relationships between NPC and the coagulation system. Moreover, the pre-treatment plasma fibrinogen level could possibly be incorporated into prognostic systems and nomograms that combine independent factors to predict the prognosis of patients with NPC.

This work was supported by the Natural Science Foundation of Guangdong Province, China [grant number 2016A020215083]. The funding agency had no role in the study design, data collection and analysis, decision to publish, or preparation of the manuscript.

26. Gao J, Zhang HY, Xia YF. Increased platelet count is an indicator of metastasis in patients with nasopharyngeal carcinoma. Tumour biology: the journal of the International Society for Oncodevelopmental Biology and Medicine. 2013;34:39-45