Metastasis in lung cancer portends a poor prognosis, and the epithelial-mesenchymal transition (EMT) in lung cancer cells is considered a prerequisite to achieve metastatic potential. Recent studies indicate that BTB/POZ domain-containing protein 7 (BTBD7) regulates EMT-associated proteins in human malignancies and however, the role of BTBD7 in lung cancer have not been identified. In present study, we examined BTBD7 expression status and its association with unfavorable clinical features in non-small-cell lung cancer (NSCLC). Firstly, we studied the fresh specimens, and found that both mRNA and protein expression levels of BTBD7 in NSCLC tissue were significantly increased compared with the adjacent nontumorous lung tissue. Then, we determined BTBD7 protein expressions in the paraffin-embedded samples from NSCLC patients, and analyzed the relations of BTBD7 expression with clinicopathologic features of the patients. The results showed that incidence of metastasis in patients with positive BTBD7 expression was significantly higher than that in those with negative BTBD7 expression, and the positive BTBD7 expression rate in metastatic cases was significantly higher than that in non-metastatic ones; furthermore, Cox regression analyses revealed that BTBD7 was an independent risk factor for either metastasis or survival in NSCLC patients. Thus, we conclude that BTBD7 contributes to metastasis of NSCLC and BTBD7-positive NSCLC may have a high potential for metastasis and thereby a poor prognosis

Lung cancer is one of the most common and lethal human malignancies worldwide, ranking first in terms of both incidence and mortality (1). Its prognosis remains poor despite recent advances in both diagnosis and therapy, which is attributed largely to the high incidence of distant metastasis at initial diagnosis. However, the mechanism responsible for lung cancer metastasis is still poorly defined.

BTB/POZ domain containing protein (BTBD) is a growth suppressor protein that mainly participates in protein-protein interaction with E3 ubiquitin ligase (2, 3). A recent study using MDCK (Madin-Darby canine kidney) cells showed that BTBD7, one of the spliced variants of BTBD, promotes dispersion of the cells and down-regulates E-cadherin which contributes to the metastasis inhibition in pulmonary adenocarcinoma (4-6). Moreover, BTBD7 has been proved to promote angiogenesis and metastasis of hepatocellular carcinoma (HCC) both in vitro and in vivo, but do not influence cell proliferation or colony formation (7). However, whether BTBD7 participates in the metastasis and affects the prognosis of non-small-cell lung cancer (NSCLC) requires to be clarified. Here, we determined the BTBD7 expression status in NSCLC and its potential clinical significance.

All procedures of this study were approved by the Xiangya Hospital Ethics Committee.

BTBD7 immunohistochemistry was conducted on 5-μm thick, formalin-fixed, paraffin-embedded tissue sections. The slides were stained by labeled streptavidin-biotinylated peroxidase method (ZSGB-BIO, Beijing, China) according to the manufacturer's instructions. The primary antibody used was a goat ployclonal anti-BTBD7 (C-18, Santa Cruz Biotechnology, USA), and antigen retrieval was accomplished by heat treatment in a citrate buffer. Immunostaining was detected with diaminobenzidine (ZSGB-BIO, Beijing, China) and nuclei were counterstained with hematoxylin. The primary antibody was omitted in negative control samples.

SYBR Green fluorescent-based qRT-PCR was performed as previously described (9). Relative mRNA expression levels were calculated by the 2-ΔCt method, based on threshold cycle values, and were normalized to the internal control (β-actin).

Statistical analysis was performed using SPSS 13.0 software (SPSS, Inc., Chicago, IL). Quantitative values are presented as mean ± standard deviation or median (range). Student t test and χ2 test were used for comparison of categorical and continuous variables, respectively. Kaplan-Meier model was used for survival analysis, and Cox regression model was used for survival-related multivariate analysis. Analysis of risk factors of metastasis in NSCLC was based on logistic regression model. P<0.05 was considered to be statistically significant.

Expression of BTBD7 mRNA and protein in fresh NSCLC tissue 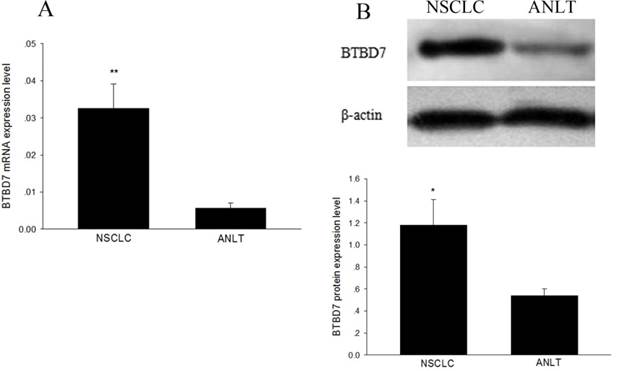 Although tremendous research efforts have been made, metastasis of lung cancer remains the major obstacle for its successful management. So it is an urgent need to find the useful biomarkers or effective therapeutic targets associated with this process. In this study, we first examined the BTBD7 expression status in NSCLC tissues, and the results showed the average expression levels of both BTBD7 mRNA and protein in NSCLC tissues were significantly higher than those in their adjacent lung tissues, which suggested that BTBD7 may be probably a biomarker for NSCLC. Subsequently, we determined BTBD7 protein expression in 93 NSCLC patients and however, the results showed that the overall positive expression rate of BTBD7 protein was only 40.86%, so BTBD7 may not be a sensitive biomarker for NSCLC. 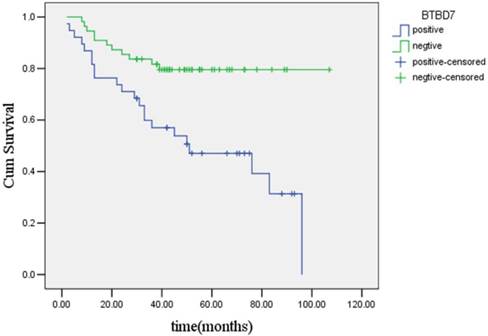 Members of the POZ gene family, characterized by a conserved BTB/POZ protein-protein interaction motif, have been implicated in human cancer (10, 11). BTBD7 is essential in embryonic phase of lung development because it regulates both branching morphogenesis and epithelial tissue remodeling (7). Moreover, BTBD7 has recently been demonstrated to participate in lung branching morphogenesis and epithelial tissue remodeling by regulating Snail2, fibronectin, and E-cadherin, which are associated with lung cancer invasion and metastasis (12-14). Tao and colleagues (7) found that knockdown of BTBD7, which acts as an upstream activator of epithelial-mesenchymal transition (EMT), induces E-cadherin expression, but restrains fibronectin and Twist1 expression in HCC cells, thereby suppressing metastasis and recurrence of HCC. Our study found that the difference between the incidence of metastasis in patients with positive BTBD7 expression and those with negative BTBD7 expression, as well as the positive BTBD7 expression rate of the metastatic patients and non-metastatic patients was significantly different, thus suggesting that BTBD7 may play a significant role in the process of lung cancer metastasis. Then, logistic regression analysis was performed to further confirm the relationship between BTBD7 expression and NSCLC metastasis, and the results identified that BTBD7 expression along with TNM stage were independent risk factors for NSCLC metastasis, and the risk of metastasis in patients with positive BTBD7 expression was 10.258 times as high as that in those without BTBD7 expression. Therefore, it can be inferred that BTBD7 is a critical contributor to NSCLC metastasis. However, the mechanism for BTBD7 promoting NSCLC invasion and metastasis is unknown. Based on previous studies, we hypothesized that BTBD7 regulates epithelial cell dynamics and branching morphogenesis through inducing Snail2 and suppressing E-cadherin expression, such events are associated with increased cell-to-cell adhesion, enhanced cell motility, invasive phenotypes, which is an important physiological process contributing to NSCLC invasion and metastasis (15, 16).

In conclusion, our findings suggest that BTBD7-positive NSCLC may have a high potential for metastasis and thereby a poor prognosis, moreover, BTBD7 may serve as a predictor of metastasis and a potential therapeutic target for NSCLC. However, a full understanding of the mechanism for the activity of BTBD7 in NSCLC requires further investigations.

This study was supported by grants from the National Nature Science Foundation of China (No. 81102046).