Previously, we found that the unconventional small human heat-shock protein HSPB11 inhibits cell death by HSP90 mediated cholesterol-rich membrane microdomain dependent activation of phosphatidylinositol-3 kinase/protein kinase B pathway and by stabilising the mitochondrial membrane systems. Also, progressive cytoplasmic expression of HSPB11 correlated with brain tumor malignancy. In the present study we investigated how cytoplasmic abundance of HSPB11 augments tumor malignancy. We up- and downregulated the cytoplasmic level of HSPB11 before paclitaxel exposure in NIH3T3 and HeLa cells, which normally express low and high levels, respectively, of the HSPB11 protein. We examined the paclitaxel-mediated induction of cell death, mitochondrial fission, HSPB11 mitochondrial translocation and inhibitory phosphorylation of dynamin-like protein-1 (DLP1). We found that increasing cytoplasmic abundance of HSPB11 in NIH3T3 cells protected against paclitaxel-induced apoptosis, while suppressing HSPB11 in HeLa cells sensitised the cells toward paclitaxel. Also, paclitaxel enhanced mitochondrial translocation of HSPB11 in wild type HeLa but not in NIH3T3 cells. More importantly, increased cytoplasmic level of HSPB11 in NIH3T3 cells enhanced the inhibitory phosphorylation of DLP1 and attenuated paclitaxel-induced mitochondrial fission. All these results suggest that increased cytoplasmic abundance of HSPB11 augments inhibitory phosphorylation of DLP1 thereby reduces mitochondrial fission that eventually leads to decreased apoptosis. This novel mechanism may explain the resistance to apoptosis and increased malignancy of HSPB11-overexpressing tumours. The clinical significance of this mechanism has already been highlighted by the finding that the kinase inhibitor tyrphostin A9 induces cancer cell death by DLP1-mediated mitochondrial fragmentation.

Small heat shock proteins (sHSPs) promote cell survival by preventing the aggregation of nascent, stress-accumulated, misfolded proteins and directly interacting with various components of the apoptotic machinery [1,2]. The overexpression of sHSPs may increase malignancy and cytostatic tumour resistance. The most extensively characterised sHSP family members, HSPB1 and HSPB5, were found to modulate metastatic potential and tumour progression [3]. We established a positive correlation between cytoplasmic HSPB11 expression and histological grade of brain tumours [4]. Increased expression of sHSPs was proposed as a diagnostic tool, and mechanisms of the regulation of sHSP expression or oligomerisation were suggested as therapeutic targets for clinical tumour management [1, 3].

NIH3T3 and HeLa cells were purchased from the American Type Culture Collection. The culture and harvesting of cells, isolation of cytosolic and mitochondrial fractions and immunoblotting were performed as previously described [9].

Overexpression and silencing of HSPB11

After paclitaxel-treatment, the cells were rinsed and harvested. The Annexin-V-FLUOS Staining Kit (Roche Applied Science) was used according to the manufacturer's protocol, and the cells were analysed using flow cytometry in a BD FACSCalibur flow cytometer (BD Biosciences). Quadrant dot plots were created using CellQuest software (BD Biosciences), and the numbers of live, necrotic and apoptotic cells were expressed as a percentage of the total number of stained cells. All the experiments were repeated three times.

Samples were visualised using an Olympus FluoView 1000 confocal laser scanning microscope. Excitation by a multiline argon-ion laser at 488 nm and green helium-neon laser at 543 nm was used to visualise GFP-tagged HSPB11 and MitoTracker Red, respectively, at 10 µs/pixel in photon-counting and sequential mode. The field of interest was scanned in XY or XYZ mode to observe a single layer or the total thickness of the cells at a 1.5-µm layer distance, respectively, and images were acquired at 1024 x 1024 pixels/layer. All the experiments were repeated three times.

The mean ± the standard error of the mean (SEM) values were analysed using a one-way or two-way analysis of variance followed by Tukey's post-hoc test. When the F-test indicated unequal variances, the Kruskal-Wallis test was performed.

Cytoprotection by HSPB11 is primarily achieved by inhibiting apoptosis

We increased the cytoplasmic abundance of HSPB11 by overexpressing it in NIH3T3 fibroblasts that normally express the protein at low extent. After double-staining the cells with fluorescein-labelled Annexin-V and propidium iodide, we determined the type of death induced by a 3 h exposure to 150 nM paclitaxel using flow cytometry. This approach is widely used to detect apoptosis and necrosis. Annexin-V binds to phosphatidylserine residues that appear on the outer surface of the cell membrane as an early indicator of apoptosis, whereas the entry of propidium iodide into the cell indicates a loss of membrane integrity and therefore necrosis. As demonstrated in Figure 1A, the transfection of our construct effectively increased the steady-state level of HSPB11. In sham-transfected NIH3T3 cells, paclitaxel treatment induced apoptotic death in 29.0±2.8% of the cells and necrotic death in 21.0±2.1% of them (Fig. 1B and C). The levels of paclitaxel-induced apoptosis and necrosis decreased to 12.3±1.4% (p<0.05) and 17.6±1.5% (not significant), respectively, in HSPB11-overexpressing NIH3T3 cells (Fig. 1B and C), confirming that HSPB11 reduced apoptosis.

As an opposite approach, we silenced HSPB11 using the Dicer-substrate siRNA (DsiRNA) technique in HeLa cells (Fig. 1D), which express high levels of endogenous HSPB11. Compared with sham-transfected wild-type cells, HSPB11 silencing sensitised the cells to paclitaxel-induced apoptotic and necrotic cell death (Fig. 1E and F). We found a significant increase in apoptosis compared with necrosis in the HSPB11-silenced HeLa cells, which supported our findings in the HSPB11-overexpressing NIH3T3 cells.

Effects of HspB11 and paclitaxel on mitochondrial fission. NIH3T3 fibroblasts were transiently transfected with a plasmid expressing a HspB11-GFP fusion protein and were exposed to 150 nM paclitaxel (Taxol) or not exposed (Untreated) for 3 h. After loading of the red fluorescent mitochondrial dye MitoTracker Red, mitochondria and GFP were visualised using laser scanning confocal microscopy. Representative images (A) of three independent experiments are presented. The left (red channel) and right (merged red and green channels) panels depict the same microscopic field. The HspB11-overexpressing cells are green-yellow in the right panels, whereas the wild-type cells are red. Mitochondrial fragmentation counts (B) were determined from the MitoTracker Red images, and mean ± SEM fragmentation values of randomly selected 25 cells (per group) are presented as a bar diagram. Significant differences between SHAM (light bars) and transfected (dark bars) are indicated as * (p<0.05). 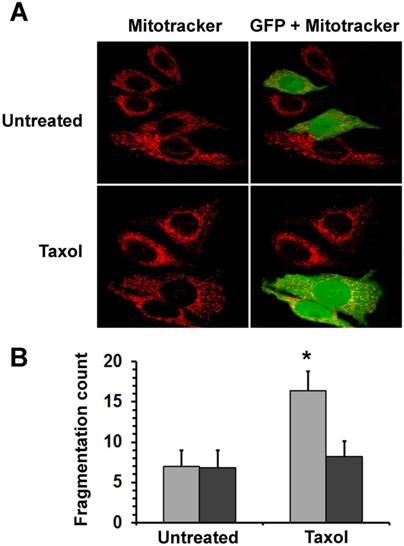 Paclitaxel increases the mitochondrial localisation of HSPB11 in HeLa cells

Previously, we found that recombinant HSPB11 protected isolated mitochondria from high-calcium-induced depolarisation [11], suggesting a direct interaction between HSPB11 and mitochondria. To verify whether a similar direct interaction was responsible for the fission resistance, we investigated the mitochondrial localisation of HSPB11 after paclitaxel treatment. HeLa and NIH3T3 cells were exposed or not to 150 nM paclitaxel for 3 h. After isolating the cytosolic and mitochondrial fractions, we determined the level of HSPB11 in the fractions using immunoblotting. The purity of the intracellular fractions was ensured by the use of appropriate markers, which also served as loading controls. Paclitaxel treatment slightly (about 20%) enhanced the HSPB11 level in all the fractions except for the mitochondrial fraction of HeLa cells, in which the increase in HSPB11 was significantly enhanced (37%, p<0.05; Fig. 3A and B).

Effects of paclitaxel on HspB11 translocation. After subcellular fractionation, the cytoplasmic (Cyto.) and mitochondrial (Mito.) levels of HspB11 in paclitaxel-treated (dark bars) and untreated (Cont. and light bars) HeLa and NIH3T3 cells were assessed using immunoblotting with a custom-made, polyclonal anti-HspB11 primary antibody. Representative blots (A) and bar diagrams (B) of three independent experiments are presented. In addition to the anti-HspB11 antibody, subcellular fractions were also stained with anti-glyceraldehyde 3-phosphate dehydrogenase (GAPDH) and anti-pyruvate dehydrogenase complex-1α (PDC1a) primary antibodies to indicate the purity of the subcellular fraction and serve as loading controls. The values represent the mean ± SEM, the Taxol per Cont. values are indicated above the bars, and significant differences from the paclitaxel-induced increase in the cytoplasmic level of HspB11 in HeLa cells are indicated as * (p<0.05). 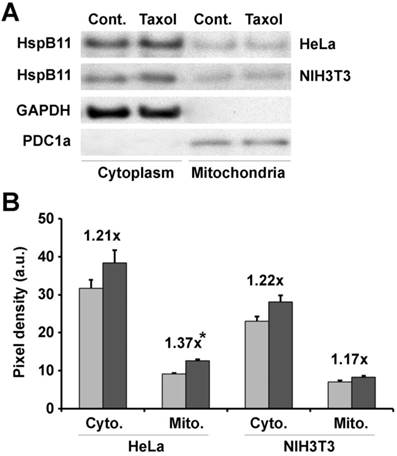 Effect of HspB11 on paclitaxel-induced dephosphorylation of DLP1. HeLa cervical carcinoma cells (A, B) and NIH3T3 fibroblasts (C, D) were transfected with empty, HspB11-silencing (A, B) and HspB11-expressing plasmids (C, D) and were then exposed or not to 150 nM paclitaxel for 3 h. The expression and phosphorylation state of DLP1 were assessed using immunoblotting with anti-DLP1 and phospho(Ser637)-specific anti-DLP1 primary antibodies, respectively, in four experimental groups: sham-transfected-untreated (1 and black bars), sham-transfected-paclitaxel-treated (2 and light grey bars), transfected-untreated (3 and white bars) and transfected-paclitaxel-treated (4 and dark grey bars). Representative blots (A, C) and bar diagrams (B, D) from three independent experiments are presented. Actin was used as a loading control, and the pixel densities were normalised to the appropriate actin value. The values represent the mean ± SEM; significant differences from the sham-transfected-untreated group are indicated as * (p<0.05). Significant differences from the transfected-untreated groups are indicated as # (p<0.05). 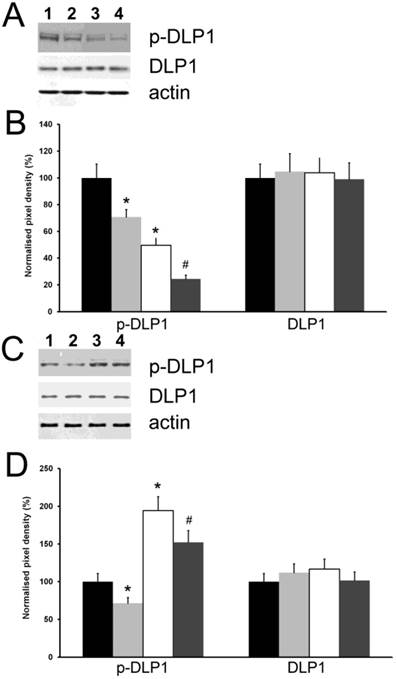 In a previous study of 91 human samples, we found a correlation between the cytoplasmic expression of HSPB11 and the clinical grade of brain tumours [4]. In an effort to explain this correlation, we up- and downregulated the cytoplasmic expression of HSPB11 in vitro in the present work and studied the paclitaxel-induced apoptosis under these conditions. Using a brief exposure to paclitaxel known to cause moderate necrotic and apoptotic cell death [12], we observed that HSPB11 overexpression protected NIH3T3 cells against paclitaxel by means of decreased apoptosis. In contrast, increased levels of necrosis and apoptosis were equally responsible for the observed vulnerability to paclitaxel of HSPB11-gene-silenced HeLa cells. We assume that the difference between the cell lines was because, unlike HeLa cells, NIH3T3 cells have not evolved compensatory mechanisms that block or mask the effect of HSPB11.

All of these findings suggest the following model for the connection between HSPB11 expression and tumour malignancy. In normal cells, HSPB11 is mainly localised to the nucleus. The increased HSPB11 expression associated with the higher protein turnover rate in tumour cells results in increased cytoplasmic localisation of the protein. Under stress conditions, HSPB11 can translocate to the mitochondria and increase the inhibitory phosphorylation of DLP1, thereby stabilising the mitochondrial network, which increases the cell's resistance to apoptosis, cytostatic drugs, and consequently, the overall malignancy of the tumour cells.

All the findings presented indicate that increased cytoplasmic abundance of HSPB11 augments inhibitory phosphorylation of DLP1 thereby reduces mitochondrial fission that eventually leads to decreased apoptosis. To the best of our knowledge, this is the first study describing an effect of an sHSP on mitochondrial fission and DLP1 phosphorylation. Whether this effect is a common characteristic of sHSPs or unique to HSPB11 remains unclear. It is noteworthy that the receptor tyrosine kinase inhibitor tyrphostin A9 induces cancer cell death by DLP1-mediated mitochondrial fragmentation [15] that highlights the clinical significance of the aforementioned mechanism.