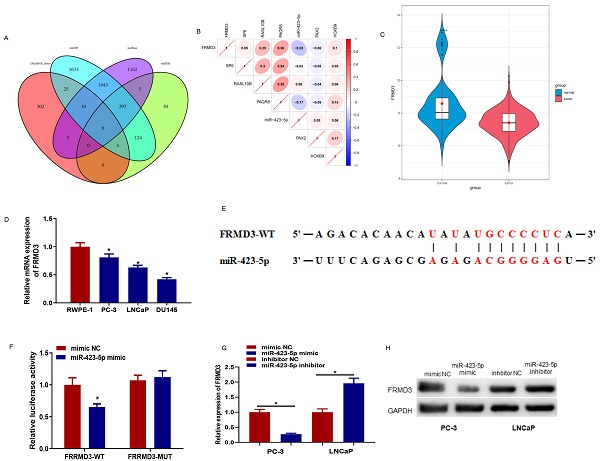 Prostate cancer (PCa) is a frequent aggressive tumor in men [1]. It is estimated that there will be more than 1.7 million PCa cases with 499,000 new deaths by 2030 because of the rapid growth and worse aging of the global population [2]. Most patients with PCa are in the advanced stage at the time of diagnosis because of unobvious symptoms [3]. Moreover, bone metastases account for a high proportion of PCa patients at initial diagnosis in China, accounting for 13.3%-26% of all confirmed cases, which seriously threats the life safety of patients [4,5]. Increasing evidence suggested that microRNAs in serum exosomes can serve as an alternative non-invasion biopsy method except for prostate-specific antigen (PSA) [6]. Thus, starting from the serum exosomes, it is of great meaning to look for abnormally expressed molecules for an in-depth understanding of the mechanism of PCa development and progression.

It was manifested that the tumor microenvironment (TME) is involved in the malignant transformation of cancers including PCa [7-9]. Exosomes, one of the main subtypes of Extracellular Vehicles (EVs), are widely found in the urine, blood, and other body fluids [10,11]. Exosomes are 30-100 nm EVs enclosed by a lipid bilayer, which contains many kinds of active molecules, like proteins, mRNAs, and non-coding RNA [6,12,13]. Current studies indicated that EVs, especially exosomes, play crucial roles in the process of intercellular communication. The main function of exosomes is to act as an intercellular transport system to transfer the contents of cancer cells, especially microRNAs [13,14]. It was reported that much plasma exosome-carried RNA can be biomarkers for diagnosis, treatment target, and prognosis biomarker of cancer patients [15]. Divya Bhagirath et al. [16] proved that microRNA-1246 is a PCa biomarker with diagnostic potential and can predict the invasiveness of disease. Plasma exosomes carrying microRNA-125a-5p and microRNA-141-5p serve as non-invasive biomarkers for PCa [17]. Moreover, compared with benign prostate hyperplasia patients or healthy volunteers, serum exosomal microRNA-141 of PCa patients is upregulated, which may be an underlying biomarker for diagnosis of metastatic PCa [6]. Apart from their diagnostic value, microRNAs in serum exosomes contributes to detecting patients' therapeutic response [18]. In conclusion, these studies all exhibited the great significance of serum exosomal microRNAs for the treatment, diagnosis, and prognosis of PCa patients.

The expression data of mature microRNAs (normal: 52, tumor:499) and mRNAs (normal: 52, tumor:499) were downloaded from The Cancer Genome Atlas (TCGA) database. Expression analyses were performed by the 'edgeR' package, thus obtaining differential microRNAs (|logFC|>1.0, padj<0.05) and mRNAs (|logFC|>1.0, padj<0.05). StarBase, mirDIP, and miRDB databases were utilized to predict the downstream targets of the researched microRNA, and then the intersection with differential mRNA was taken to obtain the target gene with binding sites with the target microRNA.

This study got the approval from the Ethics Committee of our hospital; and written informed consent from the participants. Peripheral blood samples of the control group were volunteers without malignant tumors (n=20) and PCa patients (n=56) in our hospital between 2019 and 2021 were included. 56 PCa patients received no treatment before surgery, whose median age was 77.5 years old. The patients were only included in this study when they met all of the following inclusion criteria: (a) they were PCa- related treatment naïve; (b) the diagnosis of PCa was confirmed by pathological examination; (c) their detailed clinical and pathological information was available and informed consents were obtained. If they had other hematological malignancies or solid malignant tumors were excluded. The control group was male patients with other diseases hospitalized during the same period, with a median age of 72.5 years old. These patients with the following non-neoplastic diseases were eligible: urinary stones, ureteropelvic junction obstruction or benign prostatic hyperplasia, etc.; they were excluded malignant tumors through medical history, and physical and laboratory examinations (Supplementary Table 1). The collected blood was centrifuged at 3×103 g for 10 min, then the supernatant (serum) was transferred to RNase-free tubes and maintained at -80 °C for further use.

After being extracted from human serum with an ExoQuick exosome precipitation solution kit (EXOQ5A-1; System Biosciences, USA), exosomes were kept at -80 °C or treated immediately to extract microRNA-423-5p.

Briefly, exosome suspension was supplemented into paraformaldehyde and loaded into a carbon-supported grid of TEM (Alliance Biosystems, Inc, Japan). Next, glutaric dialdehyde was utilized to fix samples, uranyl acetate was used for staining and phenolic epoxy resin was adopted to embed samples. After polymerization, the exosomes were photographed using the Hitachi H-7650 TEM (Hitachi, Ltd, Japan).

Cell counting kit-8 (CCK-8; Beyotime, China) was used to detect cell viability. 5×103 PCa cells were planted into 96-well plates. 10 μl CCK-8 reagent was respectively supplemented to each well for 24, 48, and 72 h, then the cells were stored at 37 °C for 4 h. Finally, the absorbance was measured at 450 nm by a microplate reader (Tecan Austria, GmbH, Grodig, Austria) to analyze cell viability.

For cell colony formation assay, cells (500 cells per well) were plated into 12-well plates and stored at 37 °C with 5% CO2 for 2 weeks. Cells were fixed with methanol and stained with 0.1% crystal violet for 20 min. The colonies were counted with ImagePro Plus 6.0 software (Media Cybernetics, USA).

For the invasion detection, 50 μl Matrigel U5Gl (BD Biosciences, Franklin Lakes, NJ) was pre-coated in the upper chamber. 2×104 cells suspended in 100 μl serum-free medium were put into the upper layer of the Transwell chamber (BD Biosciences). 500 μl medium with 10% FBS was added into the lower chamber. After 48-h cell incubation, the non-invading cells were removed, and invading cells were treated with methanol and 0.1% crystal violet. Micrographs were obtained from an inverted microscope (XDS-800D, Shanghai Caikon Optical Instrument Co., Ltd., China), and invading cells in random regions were counted. The cell migration assay was similar to the above assay except that Matrigel was not required in the upper Transwell chamber.

3'UTR of FRMD3 with microRNA-423-5p binding sites (FRMD3-wild type (WT)) and 3'UTR of mutant FRMD3 (FRMD3-WT) were cloned into pmiR-RB-Report (Promega, China). Next, the constructed vectors and microRNA-423-5p mimic or mimic NC were transfected together into cells using lipofectaminetm3000 (Invitrogen). After being co-transfected for 48h, the dual-luciferase assay kit (Promega) was utilized to test luciferase activity.

Exosomes (20 µg) were marked by Carboxyfluorescein succinimidyl ester (CFSE) and diluted at 1:1000. After incubation for 15 min, the exosomes were rinsed with phosphate-buffered saline (PBS), then centrifugated at 1×105 g for 70 min, and finally collected. The CFSE-labeled exosomes were incubated with PCa cells at 37 °C for 6, 18, and 36 h to observe cell uptake with a confocal fluorescence microscope.

24 BALB/c athymic male nude mice aged from 6 to 8 weeks were purchased from Shanghai Lab. Animal Research Center, Chinese Academy of Sciences (China), and raised under specific pathogen-free conditions. Nude mice were randomly grouped into LV-NC, LV-miR-423-5p, PBS, and exosome, with 6 mice in each group, and tumor growth was observed. Cells in each group were suspended with 50% Matrigel (BD Biosciences, USA). 0.2 mL cells (1×106 cells /mL) were subcutaneously injected into the flank of mice. After being injected for 8 days, tumor size was measured weekly with vernier calipers, and tumor volume (mm3) was calculated according to formula 1/2 (length×width2). After subcutaneous injection for 4 weeks, all nude mice were sacrificed, and their tumors were taken and weighed. A portion of the tumor was detected by qRT-PCR and another portion was sectioned for immunohistochemical observation.

Paraffin-embedded tissue sections were fixed with formalin, dewaxed in dimethylbenzene, rehydrated with graded ethanol, and then boiled in citric acid buffer (10 mM, pH 6.0) for 30 min to extract antigens. Then the tissue was blocked and sectioned with 5% albumin from bovine serum (Boster Bioengineering, China). Subsequently, the diluted primary antibody Ki-67 (ab21700, 1:150, Abcam, UK) was added into the sections which were then incubated overnight at 4 °C, and then secondary antibody IgG H&L (HRP) (ab6721, 1:2000) was added to incubate the sections for 1h at 37 °C. The protein was stained with DAB and the nucleus was re-stained with hematoxylin. Finally, an optical microscope was introduced to observe staining (Olympus).

SPSS 21.0 software (IBM Corp. USA) was utilized to analyze data. All experiments were conducted for at least 3 replications. The results were presented in the form of mean ± standard deviation. T-test or one-way ANOVA analysis of variance was utilized to compare differences between or among groups. P<0.05 indicated statistically significant.

Exosomes were isolated from the blood of clinical samples, and the physical characteristics and molecular markers of the isolated exosomes were characterized. The exosomes were observed by TEM as round or oval vesicles (diameters: 30 to 100 nm), and the membrane structure was intact (Figure 2A). Western blot results displayed that the protein level of CD9, CD63, and TSG101 was prominently elevated in PCa patients (Figure 2B). These results proved the successful isolation of exosomes from human blood samples. Additionally, the qRT-PCR result exhibited that the exosomal microRNA-423-5p level was notably higher in the blood of PCa patients than that in the control group (normal) (Figure 2C).

To verify whether serum exosomal microRNA-423-5p could enter and affect the activity of PCa cells, we labeled blood exosomes of PCa patients with CFSE and then incubated the labeled exosomes with PC-3 cells. The internalization of exosomes in PC-3 cells was observed by a confocal fluorescence microscope. CFSE-marked exosomes were found to be localized in the cytoplasm. After being incubated for 36h, almost all PC-3 cells turned green, suggesting that PC-3 cells significantly ingested CFSE-labeled exosomes (Figure 3A).

PC-3 cells were co-incubated with exosomes or PBS for 48 h to observe the changes in cell biological functions. Compared with the PBS+PC-3 group, cells in the exosome+PC-3 (exo+PC-3) group had stronger cell viability and colony formation ability (Figure 3B-C). Transwell assay confirmed that, compared with the PBS+PC-3 group, the number of migrating and invading cells in the exo+PC-3 group increased significantly (Figure 3D-E). Besides, compared to the control group, E-cadherin expression was reduced, while N-cadherin and Vimentin expression was elevated in the exo+PC-3 group (Figure 3F). These data exhibited that exosomes could enter PC-3 cells, and accelerate the progression of cancer cells. 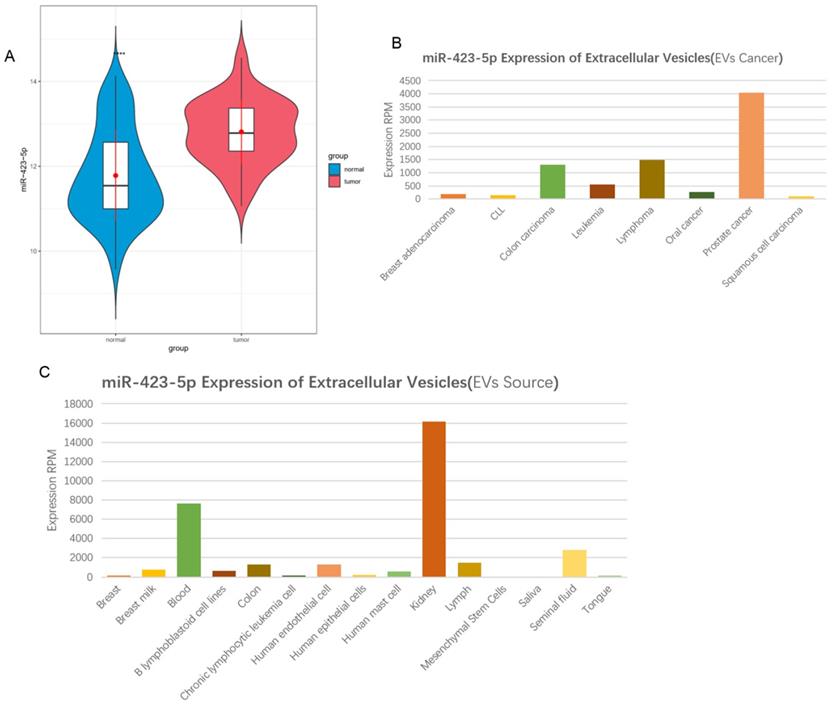 MicroRNA-423-5p in blood exosomes of PCa patients promotes cancer progression. A: Exosome uptake in PC-3 cells was observed by a confocal fluorescence microscope (scale bar= 25 µM); B: Cell activity of each group; C: Colony formation in treatment groups; D-E: Cell migration and invasion in different groups; F: The expression of EMT-related proteins of each group. (* p<0.05) 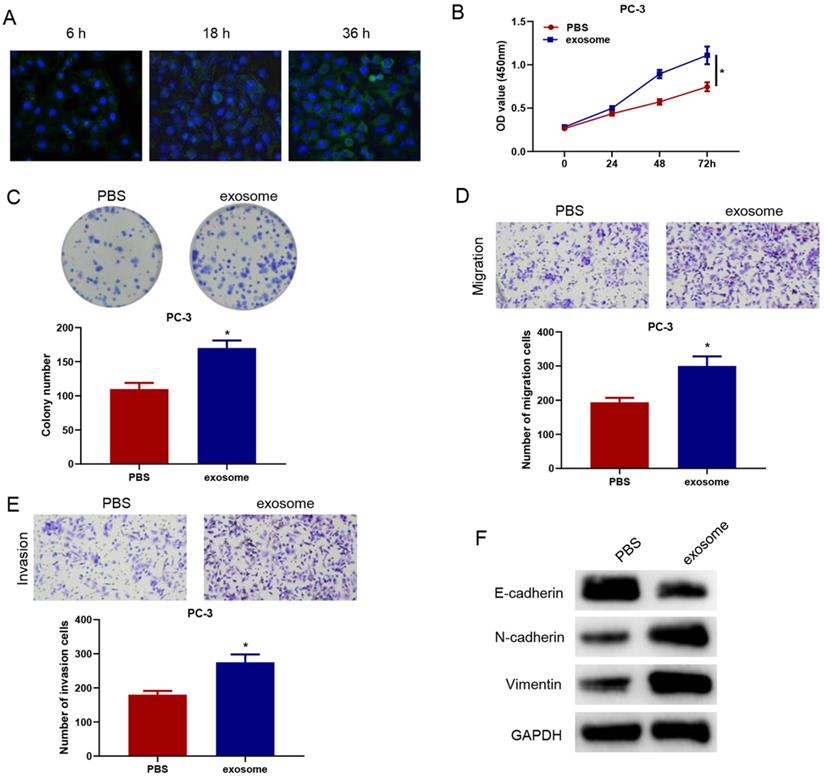 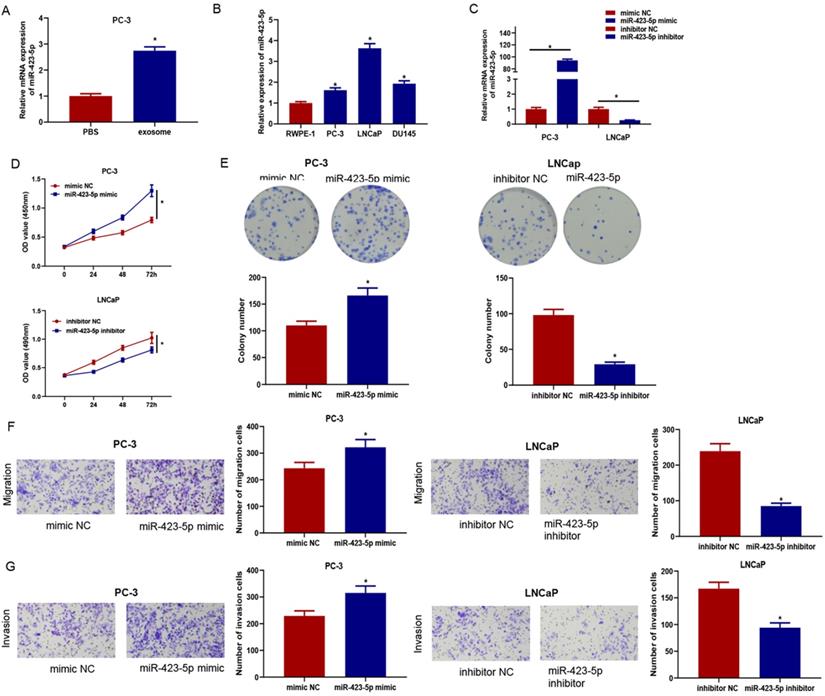 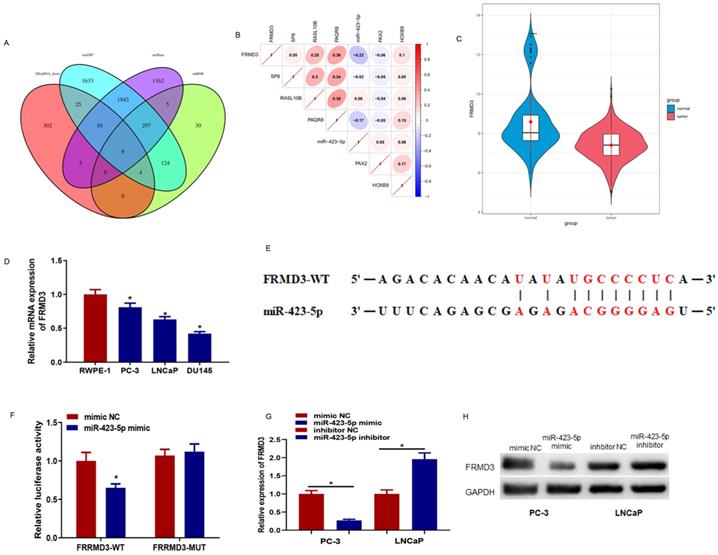 The fatality rate of PCa ranks high among male malignancies worldwide in the last few decades [25]. Digital rectal examination and detection of changes in biological markers can diagnose PCa [26]. However, most detective tools are not sensitive or specific enough, making it difficult to treat PCa effectively [27]. Exosomes have obvious advantages as novel biomarkers as they can be easily separated from the body fluids of tumor patients [12,28]. To find a more effective therapy for PCa, we attempted to illustrate the role of exosomal microRNA-423-5p in the malignant progression of PCa. It was found that microRNA-423-5p can affect EMT via down-regulating FRMD3, thus promoting cell progression of PCa. 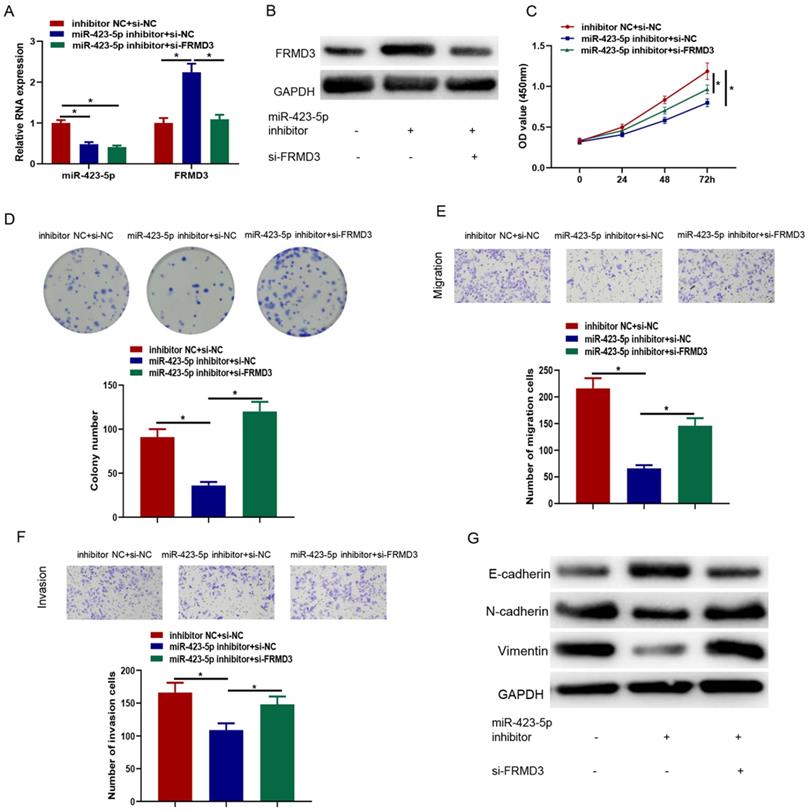 Overall, microRNA-423-5p/FRMD3 enhanced cell proliferation, migration, and invasion in PCa. Exosomes could transport microRNA-423-5p to PCa cells and accelerate PCa growth and motor ability. A novel understanding of the role of exosomes in PCa was provided in this study, and it was expected to serve as a reference for PCa therapy. We will conduct more in-depth studies on microRNA-423-5p in serum exosomes in future studies. For instance, the follow-up of PCa patients was performed to explore the prognostic value.

The raw data can be accessed from Tao Li (cnfjtony@fjmu.edu.cn).

The approval for this study was obtained from the Fujian Provincial Hospital (K2021-04-063). The methods were performed in accordance with the relevant guidelines and regulations.

11. Gould S J, Raposo G. As we wait: coping with an imperfect nomenclature for extracellular vesicles. J Extracell Vesicles. 2013 2. [Epub ahead of print]