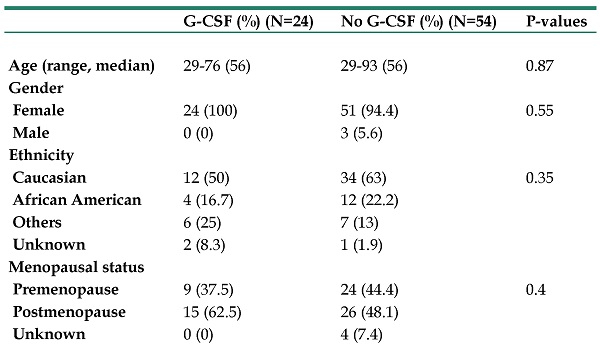 Background: Survival outcome after developing brain metastasis is poor and there is an unmet need to identify factors that can promote brain metastasis. Granulocyte-colony stimulating factor (G-CSF) is given to support neutrophil recovery after myelosuppressive chemotherapy to some patients. However, there is emerging evidence that neutrophils can promote metastasis, including through the formation of neutrophil extracellular traps (NETs), scaffolds of chromatin with enzymes expelled from neutrophils to the extracellular space. In animal models, G-CSFs can induce NETs to promote liver and lung metastasis. The primary objective of this study was to test the association between G-CSF use and the later incidence of brain metastasis.

Methods: Patients with de novo Stage IV breast cancer, without known brain metastasis at the time of initial diagnosis, were identified from electronic medical records covering the period from 1/1/2013 to 12/31/2020 at Northwell Health. Univariate and multivariate logistic regression models were used to test the association between variables of interest, including G-CSF use, and brain metastasis.

In the United States, breast cancer is the most common newly diagnosed non-cutaneous cancer and the second most common cause of cancer-related death in women [1]. Neoadjuvant or adjuvant chemotherapy, including with anthracycline based regimens and taxane, along with surgery and radiation therapy is the current standard of care for localized breast cancers [2].

Granulocyte colony stimulating factor (G-CSF) has been recommended by the National Comprehensive Cancer Network (NCCN) [2] for dose dense regimens with a high likelihood of causing treatment-related neutropenia, such as the above mentioned anthracycline based regiments. Filgrastim (Neupogen®) and pegfilgrastim (Neulasta®) are manufactured forms of G-CSF commonly used to stimulate the bone marrow to produce mature granulocytes as well as proliferation and differentiation of neutrophil precursors. These manufactured forms of G-CSF are given to support the recovery from myelosuppression after cytotoxic chemotherapies or to treat febrile neutropenia. A randomized trial showed that prophylactic G-CSF use significantly decreased the risk of febrile neutropenia (1% vs. 17%, G-CSF vs. placebo) and febrile neutropenia-related hospitalization (1% vs 14%, G-CSF vs. placebo) in patients with breast cancer [3].

G-CSF clearly has clinical benefits in the short-term, but the long-term consequences of G-CSF treatment are less clear. A clinical study showed that high expression levels of endogenous G-CSF in triple-negative breast cancer are associated with poor overall survival [4]. In the 4T1 breast cancer mouse model, G-CSG blockage significantly reduced lung metastasis[5]. Several studies have also documented a direct link between G-CSF and formation of neutrophil extracellular traps (NETs; scaffolds of chromatin with enzymes expelled from neutrophils to the extracellular space) [5, 6]. When treating healthy mice with recombinant human G-CSF, an increase in neutrophils and platelet-activating factor stimulation resulted in dose-dependent increase in NETs in blood [7]. In the same study, treating 4T1 breast cancer bearing mice with an G-CSF neutralizing antibody prevented accumulation of neutrophils and reduced their sensitization toward NET formation in vitro [7].

In addition to their ability to promote metastasis, formation of NETs has also been linked to increased risk of thrombus formation including deep venous thrombosis (DVT) and pulmonary embolism (PE) [17]. A clinical study showed NETs throughout thrombi obtained from endovascular thrombectomy in all patients with ischemic stroke [18]. In murine experiments, it was further shown that NET formation can occur concomitant with venous thrombi in the lung [7]. Particularly regarding NETs and DVT/PE in patients with cancer, a prospective observational cohort study showed that in patients with cancer, elevated NET levels in blood are associated with high cumulative incidence of venous thromboembolism [19] and another study reported that NETs in blood is a prognostic factor in patients with terminal cancer [20]. Although there are many other causes of PE/DVT than excessive NET formation, presence of PE/DVT may be a clinical indicator of a particular high activation status of NET formation. However, its association with brain metastasis is unknown.

This retrospective chart review study was approved by the Institutional Review Board (protocol number: 20-0879) at the Feinstein Institutes for Medical Research at Northwell Health and a waiver of informed consent was granted based on the study's retrospective nature. We reviewed the electronic medical record (EMR) covering the period from 1/1/2013 to 12/31/2020 to identify patients with de novo stage IV breast cancer who 1) did not have confirmed brain metastasis at the time of diagnosis, and 2) had been treated with at least one cycle of any type of chemotherapy(s) with or without G-CSF at the Northwell Health Cancer Institute. G-CSF used was determined by each treatment physician based on clinical guidelines [2, 21]. We excluded patients diagnosed with co-existing or prior malignancies except for cutaneous malignancies, which had been appropriately surgically treated.

From the EMR, we extracted age at diagnosis, ethnicity, menopausal status at diagnosis, histological type (ductal, lobular, or others), hormone receptor (HR) status, the human epidermal growth factor 2 (HER2) receptor status, smoking status, existence of pulmonary embolism (PE) and/or deep venous thrombosis (DVT) which was defined any PE/DVT found after the initial diagnosis, hormonal therapy, HER2 targeted therapy, immunotherapy, and G-CSF use. HR positivity was defined as positivity for estrogen receptor (ER) and/or progesterone receptor (PR) by immunohistochemistry staining. ER and PR positivity was defined based on the American Society of Clinical Oncology (ASCO)/College of American Pathologists (CAP) guideline. HER2 positivity was defined as a HER2/CEP17 fluorescence in situ hybridization (FISH) ratio of ≥2.0 and/or an immunohistochemical (IHC) staining score of 3+ [22].

The incidence of brain metastasis

In this retrospective study, we found no association between G-CSF use and the development of brain metastasis in patients with newly diagnosed de novo stage IV breast cancer. Interestingly, PE/DVT having occurred during follow-up period was associated with high incidence of brain metastasis.

In the metastatic setting, G-CSF is currently used to support neutrophil recovery after myelosuppressive cytotoxic chemotherapies, prophylactic to maintain dose density or to treat febrile neutropenia [2]. A previous meta-analysis showed that length of hospitalization (HR 0.63 [95% CI 0.49 -0.82]; P=0.0006) and time to neutrophil recovery (HR 0.32 [95% CI 0.23-0.46]; P< 0.00001) were both shorter in patients who were treated with G-CSFs than those who were not [23]. These are clear clinical benefits from giving G-CSF together with cytotoxic chemotherapies, but there are previous studies raising concerns that G-CSF use may promote cancer progression, and particularly metastasis, in the context of induced neutrocytosis [24, 25]. It has been shown that G‐CSF is expressed higher in triple negative breast cancer (TNBC) tumors compared to other subtypes (P < 0.001) [4, 26]. Furthermore, high G‐CSF levels in TNBC tumors are associated with short overall survival [4, 25, 27].

Recently, it has been shown that one mean by which neutrophils can promote cancer progression is through the formation of NETs. This is of particular interest because G-CSF can induce neutrophils to form NETs [5] and because G-CSF promotes brain metastasis in a breast cancer mouse model [13].

Our current study, including 78 patients, showed that patients who received G-CSF demonstrated numerically high incidence of brain metastasis compared to those who did not (24.1% versus 41.7%), but the difference was not statistically significant (P=0.28). This result remained similar in logistic regression models (OR 1.89 [95%CI 1.89-5.33]; P=0.23). A recent paper analyzing a total of 468 patients showed that the levels of NETs in brain metastases were not significantly increased over the levels in the primary breast tumors and furthermore, the serum levels of NETs were not significantly elevated in patients with brain metastasis compared to patients without any type of metastasis [12]. Together, these data suggest that G-CSF induced NETs are not likely to play a major role in promotion as drivers of metastasis. However, among the variables of interest, PE/DVT was strongly associated with brain metastasis (OR 5.83 [95%CI 1.65-20.63]; P=0.006). The association between NET and thrombosis is well established [28, 29]. This result suggests that although G-CSF-induced NETs are likely to directly linked to brained metastasis, the presence of PE/DVT potentially triggered by NET, may be a surrogate predictive marker of future brain metastasis and this needs to be confirmed by further prospective studies, and if confirmed, studies to address the mechanism linking G-CSF use complicated with PE/DVT with brain metastasis need to be planned.

There are several limitations in this study. First, this is a retrospective study. Second, it was necessary to focus on de novo stage IV breast cancer because earlier stage breast cancer almost always utilize G-CSF in neoadjuvant or adjuvant therapy but this may not represent the pattern of metastasis in other settings of patients with breast cancer. Third, sample size is small which is partially because our patients at Northwell system are taking annual screening regularly and tend to be diagnosed with earlier stage. Due to the good compliance with annual screening, the number of patients with de novo stage IV was relatively small and brain metastasis, our event of interest, is relatively rare. In our study, the total sample size is 78, with 13 of 54 having not been treated with G-CSF (24.1%) and 10 of 24 treated with G-CSF (41.7%) developed brain metastasis. With our sample size, the power to detect the 17.6% difference (41.7% vs 24.1%) using α=0.05 is 0.65. With α=0.05 and β=0.8, calculated sample sizes are 150, 79, and 47, respectively to detect 15% difference (40% vs 25%), 20% difference (40% vs 20%), or 25% (40% vs 15%). Based on these calculations, we cannot exclude that G-CSF use causes an increase in brain metastasis incidence, up to about a 25% difference between treated and untreated.

This work was supported by the Cold Spring Harbor Laboratory (CSHL) Cancer Center (P30-CA045508); CSHL and Northwell Health; and a grant from the Simons Foundation to CSHL.

M.E. is a member of Insmed's Brensocatib Research Advisory Board and holds shares in Agios Pharmaceuticals, Inc. The other authors declare no other competing interests.