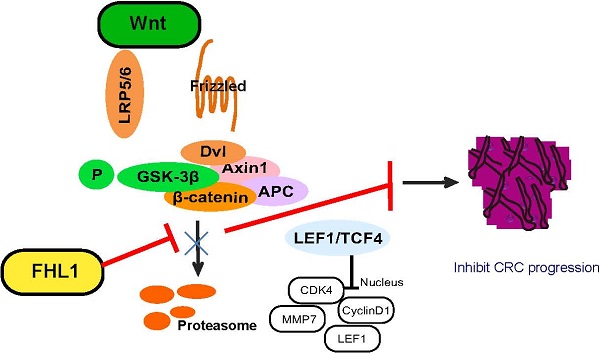 Purpose: This study aims to explore the FHL1 expression level in colorectal cancer (CRC) patients, analyze its association with patient survival and investigate the role of FHL1 in CRC.

Methods: We used secondary sequencing to profile mRNA expression in CRC tissue and corresponding adjacent normal tissue from four CRC patients. We focus on FHL1 and analyzed the association between its expression level and clinical indicators. Furthermore, we explored the functional role of FHL1 in colorectal cancer tumorigenesis by transfecting cells with siRNA or overexpression plasmids.

Conclusion: FHL1 is a potential tumor suppressor gene in colorectal cancer, and regulation of the FHL1-Wnt/β-catenin pathway may be part of its antitumor mechanism.

Colorectal cancer (CRC) is the third most common cancer in the world, causing approximately 600,000 deaths worldwide every year [1]. Although great progress has been made in the diagnosis and treatment of CRC, the majority of CRC patients are diagnosed at an advanced stage and have a poor prognosis. The 5-year survival rate of patients with advanced colorectal cancer is only approximately 10% [2]. Therefore, it is important to elucidate the molecular mechanisms of colorectal cancer. Continuous exploration of the pathogenesis of this cancer can provide a better strategy for treating CRC.

FHL1 belongs to the FHL (four and a half LIM domains) family, which consists primarily of FHL1, FHL2, FHL3, FHL4 and FHL5/ACT. The family is characterized by four and a half N-terminal LIM domains that regulate proliferation, differentiation, apoptosis, adhesion, migration, transcription and other cellular processes [7]. Studies have shown that FHL1 is downregulated in a variety of cancers, such as gastric cancer, lung cancer and oral cancer [8-10]. Regarding the regulatory relationship between FHL1 and the Wnt signaling pathway, studies in mouse C2C12 muscle cells demonstrated that the β-catenin protein could significantly activate the FHL1 promoter, thus inducing muscle cell differentiation [11]. Another study suggested that FHL1 may act as a link between estrogen and the Wnt signaling pathway in osteoblasts [12]. However, the relationship between FHL1 and the Wnt signaling pathway in CRC remains unclear.

In this study, we explored the functional role of FHL1 in CRC, elucidated its expression and determined the associated with the Wnt/β-catenin signaling pathway in CRC cells.

We collected 40 pairs of primary colorectal cancer tissue and adjacent normal tissue from patients undergoing surgery at Longhua Hospital Affiliated to Shanghai University of Traditional Chinese Medicine. No patients received radiotherapy or chemotherapy before surgery. All fresh specimens were immediately stored at -80 °C in an ultra-low-temperature freezer for preservation. At the same time, clinical information and medical records for the patients were collected, including name, sex, and age, as well as primary part, size, histological type, degree of differentiation, and clinical pathological grade of the tumor. Collection of tissue specimens was approved by the ethics committee of Shanghai University of Traditional Chinese Medicine. The tumor tissue microarray, which contained 177 paired CRC and adjacent normal tissues, was purchased from Shanghai Outdo Biotech Co., Ltd.

Human colorectal cancer cell lines, namely, HCT116, HT29, LOVO, SW620 and SW480, were purchased from the Cell Bank of the Chinese Academy of Sciences (Shanghai, China). A normal colon epithelial cell line, NCM460, was kindly provided by the Institute of Chinese Medicine of Shanghai University of Traditional Chinese Medicine. These colorectal cancer cell lines, except for HT29, were maintained in RPMI 1640 medium supplemented with 10% fetal bovine serum (FBS), 100 units/ml penicillin, and 100 mg/ml streptomycin. HT29 and NCM460 cells were cultured in McCoy′s 5A medium supplemented with the same additions. The siRNA molecules and overexpression lentiviral vector were designed by Shanghai Genechem Co., Ltd. To construct the FHL1 recombinant adenovirus vector, the full-length FHL1 ORF was inserted into the stratagene plasmid (pShuttle-IRES-hrGFP-1). The novel recombinant plasmid, Ad-GFP-FHL1, was verified by restriction endonuclease digestion and sequencing. Transfections into 293T cells for lentivirus packaging were performed using Lipofectamine 2000 (Invitrogen) according to the manufacturer's recommendations into 293T cells for lentivirus packaging. CRC cells were harvested 48 hours after transfection with lentivirus and were selected with 1 μg/ml puromycin to obtain a stable cell line.

Immunohistochemical staining of tissue was performed using the polymer HRP detection system on formalin-fixed, paraffin-embedded tissue sections. The paraffin sections were dewaxed, subjected to antigen retrieval, blocked with endogenous peroxidase, incubated with goat serum, incubated with primary antibodies, incubated with HRP-conjugated secondary antibodies, stained with DAB, counterstained with hematoxylin, and dehydrated in sequence. The dilution of primary antibody against FHL1 (Ab133661, Abcam) was 1:200. The immunoreactivity score was defined as the product of the extent score and the intensity score. A score of ≤3 was defined as negative, and a score of >3 was defined as positive.

All experimental data are expressed as means ± SDs and were analyzed using SPSS 21.0 software and plotted by GraphPad Prism 6.0 software. After a test for variance homogeneity, an independent-samples t test was used to assess significant differences between groups, and one-way ANOVA was used for multiple groups. The Kaplan-Meier method was used for survival analysis. A p-value of less than 0.05 was considered statistically significant. 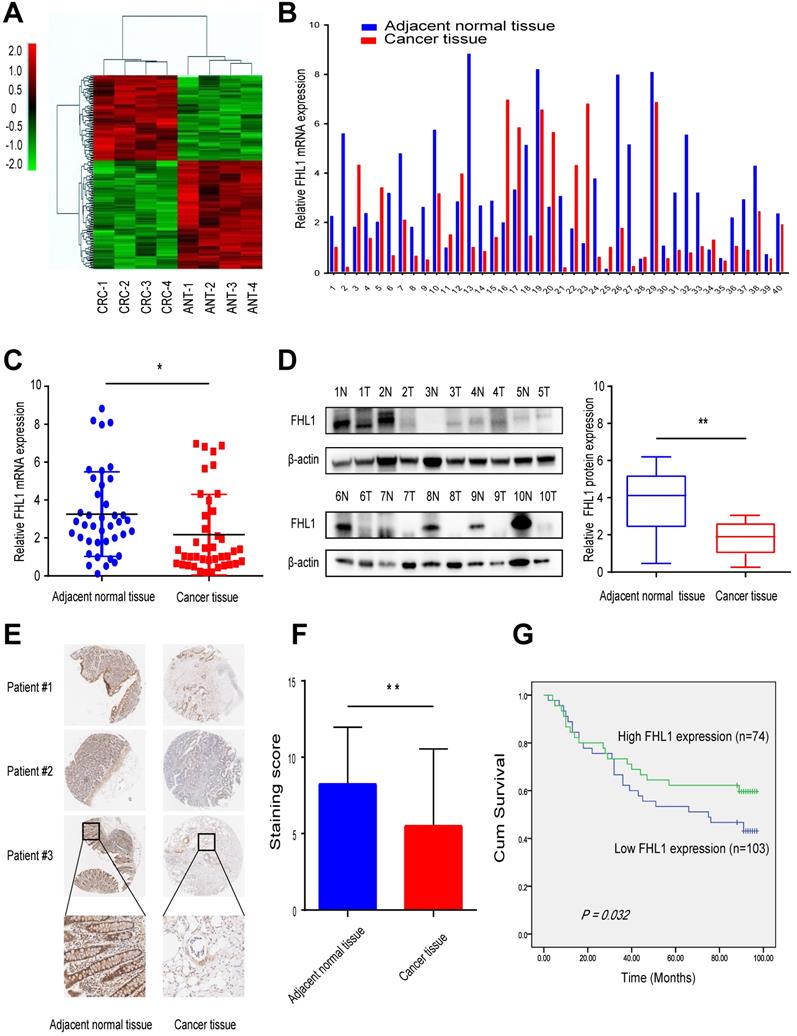 The top 10 upregulated and downregulated mRNAs from the RNA-seq

Before we explored the functional role of FHL1 in colorectal cancer tumorigenesis, we measured the expression levels of FHL1 mRNA and protein in 5 CRC cell lines, namely, HCT116, HT29, LOVO, SW620 and SW480, as well as in NCM460, a normal colon epithelial cell line. The results showed that both FHL1 mRNA and protein expression levels were downregulated in the five colorectal cancer cell lines compared with NCM460 (Fig. 2A and B). We chose HCT116 and HT29 cells for further study and transfected them with either siRNA or an overexpression plasmid in order to knock down or overexpress FHL1 in HCT116 and HT29 cells, respectively. After lentivirus infection, the knockdown and overexpression efficiencies of FHL1 were confirmed by qRT-PCR and Western blot. Of the three siRNAs used, siRNA-3 had the best silencing effect and significantly decreased FHL1 mRNA and protein levels in HCT116 cells (Fig. 2D and F). The lentiviral vector-GFP containing FHL1 (Lv-GFP-FHL1) successfully increased FHL1 expression in HT29 cells (Fig. 2C and E). The results from the CCK-8 proliferation assay and colony formation assay showed that silencing FHL1 significantly promoted cell growth (Fig. 2G) and increased the number of colonies present (Fig. 2I). Conversely, FHL1 overexpression in HT29 cells had the opposite effect (Fig. 2H and J). These results indicated that knockdown of FHL1 expression promoted the proliferation of colorectal cancer cells, thereby potentially promoting tumor oncogenesis and progression. 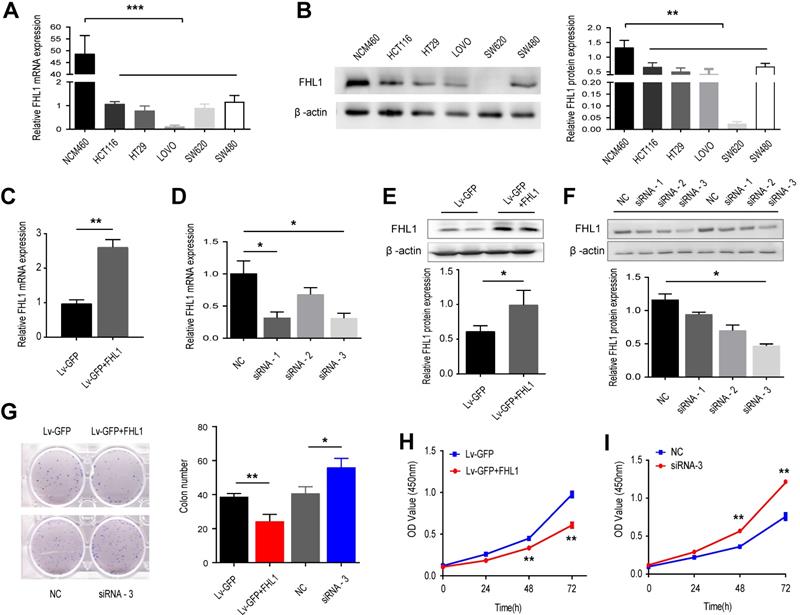 FHL1 regulates the expression of CDK4 and Cyclin D1

Our results proved that FHL1 can negatively regulate the Wnt/β-catenin pathway. Previous studies have shown that the Wnt/β-catenin pathway can affect tumor cell growth by regulating the expression of cyclin and CDK, so we measured these cell cycle proteins. As shown in Fig. 4B and C, FHL1 overexpression in HT29 cells inhibited the expression of cyclin D1 and CDK4 (Fig. 4B), whereas silencing of FHL1 in HCT116 cells greatly increased the expression of cyclin D1 and CDK4 (Fig. 4C). These results suggest that FHL1 may affect colorectal cancer cell growth by regulating cell cycle proteins. Taken together, these data indicate that FHL1 inhibits the proliferation of colorectal cancer cells by regulating the Wnt/β-catenin signaling pathway (Fig. 5).

Colorectal cancer is one of the most common malignant tumors, and it is important to screen for effective new CRC biomarkers and to explore CRC pathogenesis-related signaling pathways. As a member of the FHL family, FHL1 is characterized by four and a half LIM domains at the N-terminus. The LIM domain is a zinc finger structure rich in cysteine that could be involved in various protein-protein interactions. By interacting with other proteins, FHL family proteins can regulate cell proliferation, differentiation, apoptosis, adhesion, migration, transcription and signal transduction [13-16]. Previous studies on FHL1 have shown that its mutation leads to abnormal muscle development, and the expression of FHL1 is upregulated in pathological myocardial hypertrophy and cardiomyopathy [17-19]. Regarding FHL1 expression in tumors, studies have shown that FHL1 is downregulated in various tumors, such as breast, lung, oral and bladder cancer [20-22]. Our study evaluated the expression of FHL1 in colorectal cancer. Compared with that in adjacent tissues, the expression of FHL1 mRNA and protein in colorectal cancer tissue was significantly downregulated, and it was correlated with TNM stage and lymph node metastasis in CRC patients. Meanwhile, immunohistochemical staining showed that patients providing tissue samples with low expression of FHL1 had poor survival. In order to validate our data indicating the low expression of FHL1 in CRC tumor tissue, we also checked the correlation between FHL1 expression and survival in TCGA database. FHL1 gene expression in colorectal cancer tissues was also significantly downregulated (Fig. S1). These data suggest that FHL1 has a tumor-suppressive effect in CRC.

Next, we selected 5 colorectal cancer cell lines and 1 normal intestinal epithelial cell line and detected the gene and protein expression levels of FHL1 in each. Compared with those in the normal intestinal epithelial cell line, NCM460, the gene and protein expression levels of FHL1 in all 5 CRC cell lines were significantly reduced. Functional experiments further confirmed that FHL1 inhibited the proliferation of CRC cells in vitro. Our data demonstrated that overexpression of FHL1 inhibited the proliferation, colony formation potential, and expression of CdK4 and Cyclin D1, whereas ablating FHL1 promoted proliferation and colony formation potential, suggesting that FHL1 acts as a tumor suppressor in CRC. In normal human cells, cell division is an orderly, tightly regulated process that includes multiple checkpoints in the cell cycle to ensure genomic integrity. Cyclins and their associated CDKs are central proteins that regulate cell cycle progression [22]. These results are consistent with those of previous studies showing that FHL1 inhibits the proliferation of lung cancer cells in vitro [9]. Studies in oral cancer and bladder cancer have also found that reduced expression of FHL1 promotes tumor progression and is associated with poor prognosis [10,23]. These studies strongly suggest that FHL1 plays an anticancer role in the proliferation of a variety of tumor types.

FHL1 negatively regulates the Wnt/β-catenin pathway. A-B. The p-GSK, GSK and β-catenin protein levels were measured by Western blot after FHL1 knockdown with siRNA-3 or FHL1 overexpression with Lv-GFP+FHL1 in HCT-116 cells and HT-29 cells, respectively. C-D. Real-time PCR analysis of the expression levels of LEF1 and TCF4 in FHL1 knockdown or overexpression cells. E. The LEF1 and TCF4 protein levels were assessed by Western blot after using FHL1 siRNA-3 or/and PRI-724 in HCT-116 cells. Data are presented as mean ± SD and are representative of 3 independent experiments. * P < 0.05, ** P < 0.01. 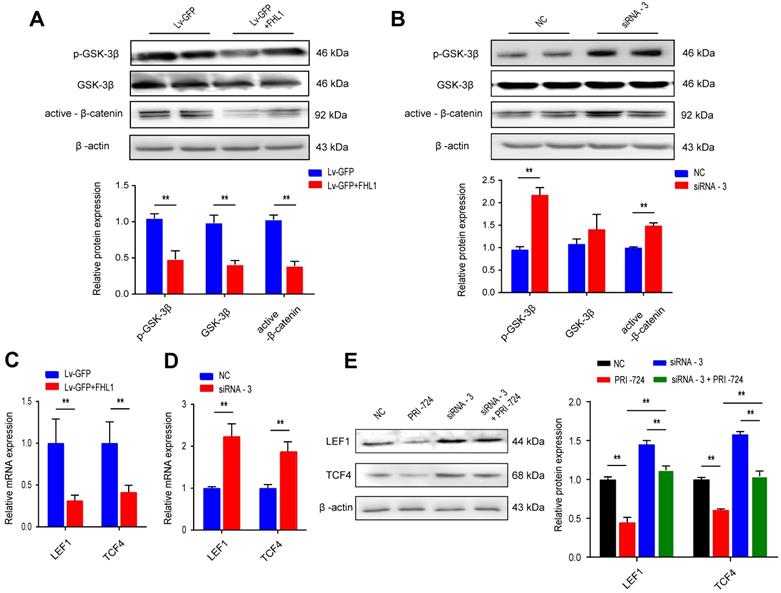 The effect of FHL1 overexpression or knockdown on cell cycle proteins in colorectal cancer cells was elucidated. A. The proliferation of HCT-116 cells after FHL1 knockdown by siRNA-3 or treatment with PRI-724 was measured using a CCK-8 cell-counting kit. B-C. Expression of cell cycle-related proteins was measured by Western blot after FHL1 knockdown with siRNA-3 or FHL1 overexpression with Lv-GFP+FHL1 in HCT-116 cells and HT-29 cells, respectively. Data are presented as mean ± SD and are representative of 3 independent experiments. * P < 0.05, ** P < 0.01. 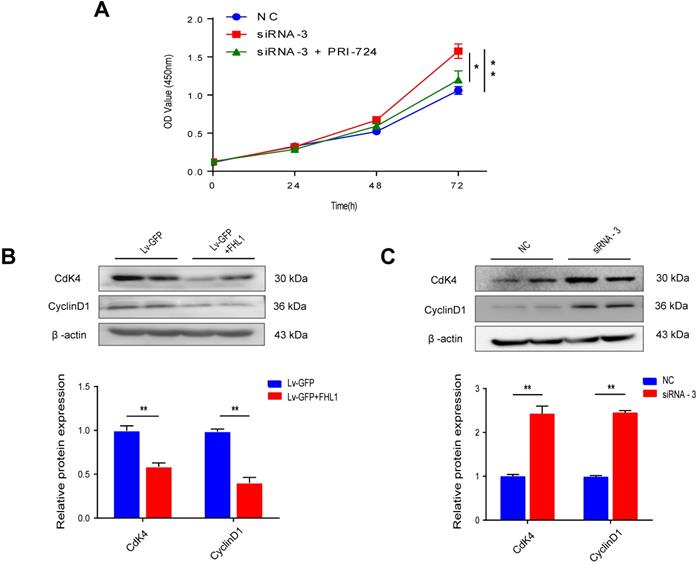 Schematic illustration of FHL1 inhibition of the Wnt/β-catenin pathway in colorectal cancer cells. 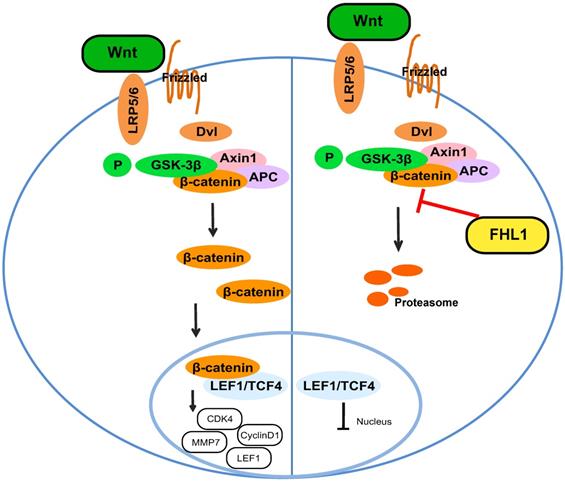 In summary, our study demonstrates that FHL1 exhibits an anticancer function and that its inhibition of Wnt/β-catenin signaling is one of the mechanisms by which FHL1 plays its role. FHL1 expression is an independent predictor of the prognosis of patients with CRC.

This work was supported by the National Nature Science Foundation of China (No.81874206), Shanghai Rising-Star Program (20QA1409300), Program for Young Eastern Scholar at Shanghai Institutions of Higher Learning. We thank Cloud-Seq Biotech Ltd. Co. (Shanghai, China) for the RNA-Seq service.

The human cancer tissues used in this study were approved by the institute ethical committee of Longhua Hospital affiliated to Shanghai University of Tradional Chinese Medicine.

The consent forms were signed by every participant, and will be provided upon request.