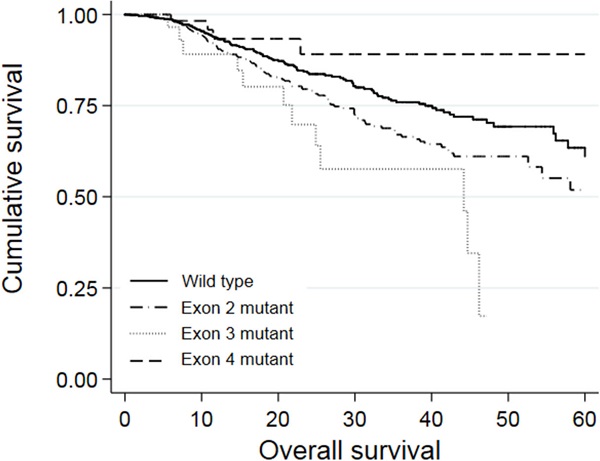 Background: The clinical significance of KRAS exon 3/4 mutations in colorectal cancer (CRC) remains unclear. We aimed to assess the prognostic value of KRAS exons 3 and 4 mutations to determine the necessity for their testing.

Colorectal cancer (CRC) is the third and second most common malignancy in men and women worldwide, respectively, and the fourth leading cause of cancer-related mortality [1, 2]. KRAS is one of the first genes to be identified as an oncogene in CRC. Detection of KRAS mutations has emerged as an important assessment method for patients with CRC due to its clinical value in predicting prognosis and resistance to targeted therapies [3]. KRAS mutations are often found in exons 2, 3, and 4, with KRAS exon 2 mutations being the most common, accounting for 81-96% of all KRAS mutations. The remaining 4-19% of mutations are located in KRAS exons 3 and 4 [4-6]. Despite the lower frequency of mutations in KRAS exons 3 and 4, they should not be neglected given the high prevalence of CRC.

Currently, mutations in KRAS exon 2 are routinely tested for metastatic CRC in most clinical institutions, and the identification of such mutations has been wildly reported to be associated with poor prognosis and resistance to anti-epidermal growth factor receptor (EGFR) therapy [3, 7, 8]. In contrast, mutations in exons 3 and exon 4 of KRAS are not widely tested due to their low mutation rate. Thus, the prognostic value of mutations in KRAS exon 3/4 remains unclear, and patients harboring KRAS mutations in exon 3 or exon 4 are usually combined into one group to meet the number requirements for analysis [5, 9, 10]. Further, no consensus has been reached on the clinicopathologic features and prognosis of patients with KRAS mutations in exon 3 or exon 4 [11-13]. 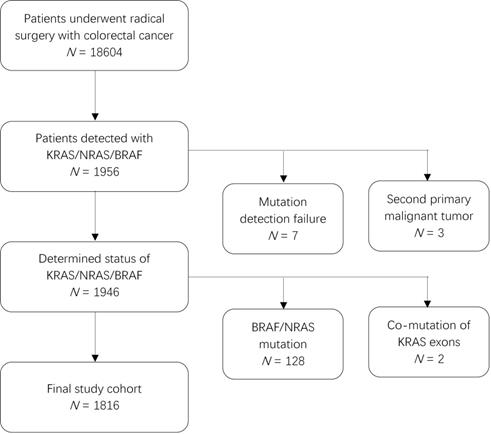 Specific mutations in the KRAS gene are closely related to the precise treatment of colorectal cancer. We have previously analyzed the clinicopathologic features and prognostic value of KRAS, NRAS, and BRAF mutations in our cohort [14]. The present study aimed to assess the prognostic value of KRAS mutations in exons 3 and 4 to elucidate the necessity for their testing as well as to identify the clinicopathologic characteristics of patients harboring these mutations.

This was a retrospective study of patients who underwent radical surgery and were pathologically diagnosed with CRC between July 2010 and June 2018. Of the 18604 patients whose tumor tissues were screened for mutations, 1949 patients were identified to have mutations in KRAS, NRAS, or BRAF. We excluded three patients due to a second primary malignant tumor (two with hepatocellular carcinoma and one with lung adenocarcinoma). Further, considering the effect of BRAF and NRAS mutations on prognosis, we also excluded 128 patients with infrequent mutations in BRAF (V600E or non-V600E) or NRAS (exon 2/3/4) and 2 patients that harbored KRAS mutations in both exons 2 and 3 or in exons 2 and 4. Finally, 1816 patients were included in the analysis (Figure 1). This study was approved by the Research Ethics Committee of the Fudan University Shanghai Cancer Center in China, and all patients provided written informed consent.

Statistical analysis was performed using SPSS software version 25.0 (IBM Corporation, Armonk, NY, USA). A two-sided P-value < 0.05 was considered statistically significant. Chi-square tests and Fisher's exact tests were used to compare the categorical variables. For continuous variables, the Kolmogorov-Smirnov test was performed to verify the normal distribution assumptions. The exploratory comparison of normally distributed and non-normally distributed independent groups was performed using t-tests and Mann-Whitney U tests, respectively, for comparison between two groups and using analysis of variance (ANOVA) for comparison between more than two groups. Logistic regression was used for multivariate analysis. Overall survival (OS) was defined as the time between the first surgery and death from any cause. For survival analysis, curves were plotted using the Kaplan-Meier method and analyzed using the log-rank test. Univariate and multivariate analyses to identify prognostic biomarkers were performed using Cox proportional hazard models.

Mutational landscape and clinicopathologic characteristics of the patients

The total KRAS mutation rate was 49.0% (889/1816), while the KRAS exon 2, 3, and 4 mutations rates were 43.0% (780/1816), 1.9% (34/1816), and 4.1% (75/1816), respectively. The mutation analysis results are shown in Table 1. The patients' clinicopathologic characteristics and the results of univariate analysis are shown in Table 2. Meanwhile, the results of multivariate analysis are shown in Table 3. In both univariate and multivariate analyses, a high rate of KRAS exon 2 mutation was associated with the following factors: female sex, advanced age, right-colon tumor, high carcinoembryonic antigen (CEA) levels, stage IV tumor, tumor type histology, and extranodal tumor deposit. The KRAS exon 3 mutation rate was higher in female patients and in patients with extranodal tumor deposit. Factors associated with a high KRAS exon 4 mutation rate included advanced age, tumor type histology, and mucinous carcinoma.

Univariate analysis of the clinicopathologic features

Multivariate analysis of the clinicopathologic features

Kaplan-Meier analysis of patients with KRAS exon 2, 3, or 4 mutations. 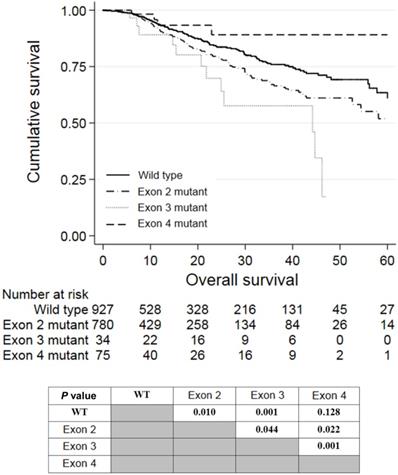 Univariate and multivariate analyses of the prognostic variables for OS

a) Cases were considered as palliative excision when primary and metastatic lesions were not both radically resected.

Despite evidence that mutations in RAS genes, particularly KRAS, play an essential role in predicting resistance to anti-EGFR therapy and worse prognosis in CRC patients, only a few studies have investigated the clinical value of mutations in exons 3 and 4. Information on the clinical relevance of KRAS mutations is largely based on KRAS exon 2 testing. Although KRAS exon 3/4 mutations are associated with clinicopathologic features or patient survival, the necessity of KRAS exon 3/4 testing has not been determined to date. Thus, we conducted this single-center retrospective study to explore the impact of KRAS exons 3 and 4 mutations on patient survival.

Kaplan-Meier analysis of patients with KRAS mutations in codon 12 or 13 of exon 2. 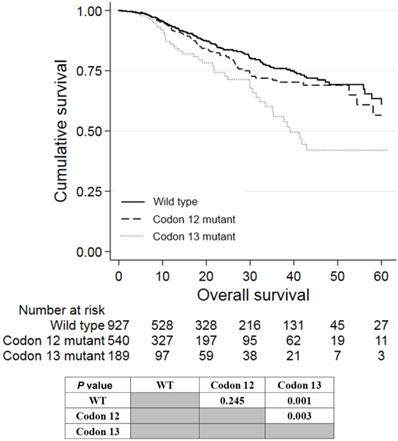 With respect to clinicopathologic features, our study showed that KRAS mutations in exon 2/3 were associated with a high rate of positive extranodal tumor deposit, and extranodal tumor deposit was known as a predictor of poor prognosis [17, 18]. This might be related to the poor prognosis of patients harboring KRAS exon 2/3 mutations. No relevant findings from other studies have been reported yet.

The prognostic value of KRAS exon 3/4 remained unclear before the current study [19-21]. Similar survival trends of patients with mutations in KRAS exon 2/3/4 were reported by Frankel et al. [22] in a cohort of 165 stage IV CRC patients, although the small cohort size did not allow for robust statistical analyses. In most studies, patients with mutations in KRAS exon 3/4 were combined for analysis [11-13], which was not reasonable according to our results because mutations in these exons resulted in very different prognosis.

The poor prognosis of patients with KRAS exon 2 mutations has been widely reported. However, the prognostic value of mutations in codons 12/13 is controversial. In a study of 1075 stage I-IV CRC patients by Imamura et al. [23], survival analysis showed that mutations in codon 12, but not codon 13, was associated with a worse prognosis than wild-type KRAS. Similar results were found by Margonis et al. [24] in a study of 512 stage IV CRC patients. Passot et al. [25] evaluated 524 stage IV CRC patients and reported that patients with mutations in codon 12 or 13 had worse prognosis than KRAS wild-type patients. However, there was no significant difference in the prognosis of patients with codon 12 and codon 13 mutations, consistent with the findings of some other studies [13, 26]. The varying results in these studies could be caused by the differences in cohort size, data analysis methods, or race.

This study was subject to limitations because of its single-center and retrospective design. Further, the influence of specific amino acid alterations on prognosis was unclear due to the small sample size of the subgroups. Further studies with a larger sample size and longer follow-up are needed to validate our findings. We will focus on response analysis of chemotherapies (irinotecan based or oxaliplatin based) and targeted therapies (cetuximab or bevacizumab) when a sufficient number of cases are accumulated.

The authors would thank all the patients included and the pathologists of the Department of Pathology of Fudan University Shanghai Cancer Center participating in this study. This work was supported by the Shanghai Committee of Science and Technology [grant numbers 20DZ1100101, 18140903702, and 19511121202].