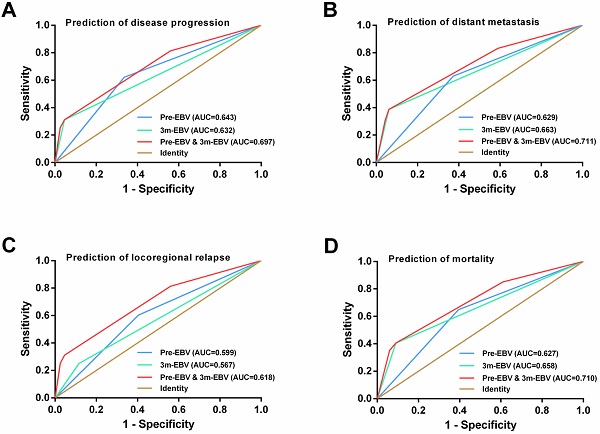 Materials and methods: A total of 543 incident non-metastatic NPC patients treated with intensity-modulated radiotherapy, with or without chemotherapy, were reviewed. Patients were divided into four subgroups based on pre-EBV and 3 m-EBV status. The data for pre-EBV and 3 m-EBV samples were integrated, and the predictability of the survival of patients with NPC was analyzed.

Nasopharyngeal carcinoma (NPC) is endemic in Southeast Asia, especially in southern China, and has been established as an Epstein-Barr virus (EBV)-associated cancer [1]. Studies have demonstrated that EBV DNA in plasma originates from the tumor, and the load of plasma EBV DNA is strongly correlated with tumor burden [2]. In recent years, plasma EBV DNA has been widely used in clinical analysis as a reliable biomarker for screening, monitoring, and prognostic prediction of NPC [3-7]. A high pre-treatment plasma EBV DNA load correlates with advanced cancer stages, and poor prognosis [2, 8-11]. Conversely, detectable post-treatment EBV DNA levels are indicative of minimal residual disease and have been reported to be a stronger prognostic factor for NPC [2, 5, 12-15].

Therefore, we performed this retrospective study to evaluate the prognostic accuracy of the combination of plasma EBV DNA levels measured pre-treatment (pre-EBV) and 3 months post-treatment (3 m-EBV) for risk stratification and prognosis in NPC patients.

Data for a total of 543 patients with newly diagnosed, biopsy-proven, and nonmetastatic NPC treated at Nanfang Hospital, of Southern Medical University, from January 2008 to December 2015 were used in this study. Patients whose pre-EBV and/or 3 m-EBV data were not available were excluded. Patients with non-WHO pathological types, distant metastasis at primary diagnosis, and previous or other synchronous malignancies were also excluded. All patients were restaged according to the seventh edition of the American Joint Committee on Cancer (AJCC) staging system based on imaging materials and medical records [22]. Our retrospective study was approved by the Ethics Committee of Nanfang Hospital, Southern Medical University (NFEC-2017-165).

All patients were treated with 2.12-2.24 Gy per fraction, with five daily fractions per week, using intensity-modulated radiotherapy (IMRT) for a total of 6-8 weeks. Cumulative radiation doses were 70-74 Gy to the gross tumor target of the nasopharynx (GTVnx), 66-70 Gy to the neck metastatic lymph node area (GTVnd), 60-62 Gy to the high-risk clinical target volume (CTV1), and 50-56 Gy to the low-risk clinical target volume (CTV2). Concurrent chemotherapy (CCT) consisted of cisplatin, administered triweekly, or weekly until the end of radiotherapy. Induction or adjuvant chemotherapy (ICT/ACT) consisted of cisplatin with 5-fluorouracil or cisplatin with taxanes or all three used together, administered triweekly for 2 or 3 cycles. Among the patients, 32 (5.9%) were at stage I and received IMRT treatment alone, 54 (9.9%) were at stage II and received concurrent chemoradiotherapy (CCRT), and 457 (84.2%) were at intermediate and advanced stages III/IV and received CCRT, ICT, and/or ACT.

All patients were routinely followed up every 3 months within the first year after therapy, every 6 months during the second and third years, and annually thereafter. Physical examination of the head and neck, nasopharyngeal endoscopy, MRI of the nasopharynx and neck, abdominal ultrasound, chest radiography, whole-body PET, and plasma EBV DNA measurements were performed routinely. PET/CT was considered if necessary.

Plasma EBV DNA measurements were performed at pre-EBV and 3 m-EBV stages using a real-time quantitative PCR technique targeting the BamH I-W region of the EBV genome. All plasma EBV DNA assays were conducted at the Laboratory Medicine Center of Nanfang Hospital, Southern Medical University. After the PCR assay, samples with an undetectable EBV DNA signal were recorded as 0 copies/mL, and a positive plasma EBV DNA load was defined as > 0 copies/mL. Referring to previous studies [2, 6, 7, 23-26], the cutoff levels chosen to classify the patients into low and high EBV DNA groups were 1500 copies/mL pre-treatment and 0 copies/mL 3 months post-treatment in this study.

Survival outcomes were estimated using the Kaplan-Meier method and compared by the log-rank test. The Cox proportional hazard model was used for multivariate analysis including the following variables: sex, age (≥45 vs. <45 years), T stage (T4 vs. T1-3), N stage (N2-3 vs. N0-1), and the change in pre-EBV and 3 m-EBV. ROC curve analysis was performed to calculate the optimal cut-off value of pre-EBV and 3 m-EBV, and compare the different prognostic values of pre-EBV, 3 m-EBV, and the change in pre-EBV and 3 m-EBV. Statistical analysis was performed using SPSS software version 21.0 (IBM Corporation, Armonk, NY, USA). Two-tailed P-values < 0.05 were considered statistically significant.

1 Pathologic type according to the 2005 World Health Organization (WHO) classification of tumors.

2 According to the 7th edition of the AJCC staging system.

Multivariate analysis revealed that integrating pre-EBV and 3 m-EBV plasma EBV DNA status could be employed as an independent predictor of PFS, DMFS, LRFS, and OS in NPC patients. Compared with the “Pre- and Post-” subgroup, the “Pre- and Post+” and “Pre+ and Post+” subgroups were independent risk factors for worse PFS, DMFS, LRFS, and OS (all P<0.001), whereas the “Pre+ and Post-” subgroup was an independent risk factor for comparatively poorer PFS (P=0.002) and DMFS (P=0.031) (Table 3).

In the past two decades, plasma EBV DNA, an archetypal circulating tumor DNA, has been recognized as a robust biomarker for NPC [27]. Previous studies have confirmed that pre- and post-treatment plasma EBV DNA have independent prognostic value in patients with NPC [2, 5-15, 28, 29]. The above findings have been further confirmed in our research. We also found that there were significant changes in the positive rate and load of plasma EBV DNA after treatment, and these findings led us to investigate whether the integrated pre-EBV and 3 m-EBV data improve prognostic stratification for NPC patients.

To the best of our knowledge, the performance of the combination of pre- and post-treatment plasma EBV DNA for predicting treatment failure in NPC patients has not been fully investigated, partly because of the limited availability of data and the lack of comprehensive subgroup analyses. In this study, we used the long-term follow-up clinical database with a large sample size, and all eligible patients were divided into four subgroups. We found that patients with persistently negative pre-EBV and 3 m-EBV had the best survival outcome, while patients with consistently positive pre-EBV and 3 m-EBV had the worst prognosis. This result is consistent with previous studies [12, 23].

Furthermore, by using the multivariate prognostic model, our data also showed that patients with consistently positive pre-EBV and 3 m-EBV had a significantly higher risk of disease progression, distant metastasis, locoregional recurrence, and death than the persistently negative group (Table 3). The most reasonable explanation for the poor prognosis of these patients is that they either had uncontrolled tumors, unfavorable treatment responses, or residual diseases, which may have progressed with high risk [5, 30]. Moreover, closer follow-up visits and further intensified therapy or timely salvage treatment might be beneficial for these high-risk subgroup patients, while excessive or non-contributive treatment and examination can be avoided for patients with persistently negative EBV DNA [31, 32].

Another important finding from our study was that the “Pre- and Post+” patients were revealed to have worse 5-year PFS, DMFS, LRFS, and OS than the “Pre- and Post-”, as well as “Pre+ and Post-” patients. Notably, the prognosis of this subgroup of patients remains controversial, mainly because of a limited number of previous studies, carried out with a small sample size of patients [11, 13, 17]. Although our results differ from those obtained by Peng et al. [11], they are broadly consistent with the findings obtained by Lin et al. [23] and Li et al. [13]. EBV DNA can be detected in NPC tumor cells [33]. Also, cell-free EBV DNA can be detected in the plasma of patients with NPC, which may come from necrosis and lysis of tumor cells infected with EBV [34, 35]. In our study, 18 patients (8.5%) with positive 3 m-EBV were found among the 212 patients with negative pre-EBV. It may be that EBV infection has occurred in the nasopharyngeal carcinoma tissue of NPC patients in the “Pre- and Post+” group before treatment, but EBV DNA could not be detected in the plasma. Next, we will collect nasopharyngeal tumor tissues and venous blood samples of NPC patients in the “Pre- and Post+” group before and after treatment, and detect EBV DNA in tumor cells and plasma to confirm this possibility.

Our study had some limitations as well. First, some potential biases were unavoidable owing to the retrospective design. Second, the population enrolled in the study was considerably small, especially the sample size for the “Pre- and Post+” subgroup. Moreover, all NPC patients originated from one center and there was no validation cohort. Therefore, larger sample-sized, prospective, multi-center, randomized, and controlled clinical studies are required to further validate our findings. 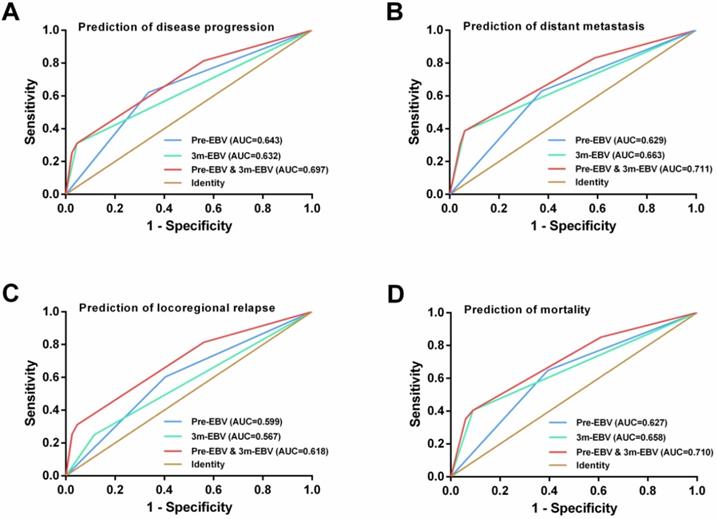 In summary, the results of the current study demonstrated that integrating pre-EBV and 3 m-EBV data was an effective prognostic predictor for NPC patients, which could further provide more accurate risk stratification. Our study may help guide individual management for NPC patients' in future clinical practice. However, further studies with larger sample sizes and multiple patient origins will be helpful in establishing the reliability of the proposed method.