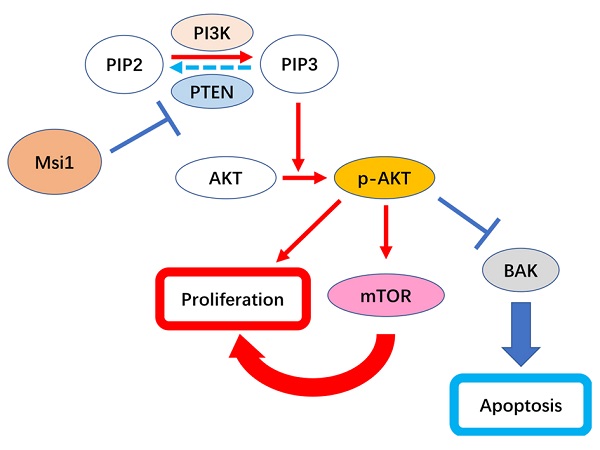 Cervical carcinoma is a high-incidence malignant tumor that affects the quality of life and threatens the health of females. Human papilloma virus (HPV) is a high-risk factor that accelerates precancerous lesion development to cancer [1]. Despite advances in the primary prevention of cervical cancer, a vast majority of patients continue to present at a locally advanced stage, necessitating treatment with chemoradiation and brachytherapy in low- and low-middle-income countries [2]. Intractable cervical cancer is still a huge challenge because the median age of patients has dropped and they are suffering from the disease in the middle or late stage, during which treatment is quite difficult. The development of cervical cancer involves a long process of aberrant gene expression and multiple disordered pathways. For example, Slug and SALL4 are related to the progression of cervical cancer [3, 4]. ALDH and SOX2 are relevant to cervical cancer stem cells [5,6]. Additionally, REX1 is related to the EMT of cervical cancer cells [7] and OCT4 is relevant to cervical cancer cell apoptosis [8].

Msi1, a member of the Musashi family, regulates the expression of proteins by targeting their mRNAs. Msi1 can specifically recognize and bind to the 3'-UTR region of target mRNAs, such as (G/A) UnAGU (n=1-3) [9, 10]. Msi1 was first reported to be expressed in neural progenitor cells and during embryonic development. Later, several studies showed that the expression of Msi1 was upregulated in a variety of malignancies, such as glioma, cervical cancer, colorectal cancer, and breast cancer [11, 12, 13, 14]. Knockdown of Msi1 could reduce the activities of the PI3 kinase-AKT signaling pathway through the upregulation of PTEN in glioma cells [15]. Msi1 activated Notch signaling not only by translationally inhibiting NUMB, but also by downregulating the 26S proteasome by binding to the mRNA of NF-YA in cancer stem cells (CSCs) or tumor-initiating cells [16]. Knockdown of Msi1 inactivated STAT3 signaling and inhibited the proliferation of oral squamous cell carcinoma [17]. Msi1 could participate in Hedgehog signaling by regulating c-Myc and two microRNAs to regulate the proliferation and apoptosis of mesenchymal stem cells [18]. Msi1-associated genes are involved in cell proliferation, cell differentiation, cell cycle, apoptosis and protein modifications [19]. It has been reported that Msi1 could promote the EMT, invasion and metastasis of cervical cancer cells by activating the Wnt signaling pathway [20].

The human cervical cancer cell lines SiHa and HeLa were obtained from the ATCC (American Type Culture Collection). Both SiHa and HeLa cells were cultured in high-glucose Dulbecco's modified Eagle's medium (DMEM, Sigma-Aldrich, St Louis, MO, USA). All of the culture media contained 10% FBS (fetal bovine serum, HyClone, Thermo Scientific, Waltham, MA, USA). Bz 423(CAS No:216691-95-1, MedChemExpress, USA), as the agonist of BAK, was added in the culture medium and incubated for 3 hours for BAK rescue experiment. Clinical samples were collected from the First Affiliated Hospital of Xi'an Jiaotong University from 2008 to 2018 as described in our previous study.

The immunohistochemical and immunocytochemical analyses used in this study were performed as described in our previous study. In brief, 4μm sections were prepared from paraffin-embedded tissues, and the tissue sections were subjected to the following process: dewaxing, rehydration, citrate buffer (10 mM sodium citrate, 2 mM citric acid, pH 6.0) incubation for 2 min, 3% H2O2 for 10 min (room temperature), and PBS washes (phosphate-buffered saline, at 5 min 3 times). Then, the sections were incubated with the primary antibodies at 4°C overnight. The next day, the sections were incubated with secondary antibodies (horseradish peroxidase-conjugated) for 20 mins and washed with PBS 3 times for 5 mins. Finally, the sections were examined under an Olympus CX31 microscope (Olympus, Tokyo, Japan). The sections were scored by 2 individuals in 5 randomly selected representative fields at 40× magnification. The staining intensity was determined as follows: 1, no staining; 2, weak staining; and 3, strong staining. The percentage of positive cells was determined as follows: 1, 0-25% positive cells; 2, 26-50%; 3, 51-75%; and 4, 76-100%. The immunohistochemistry (IHC) score of Msi1 and PTEN = percentage score × intensity score.

A FACS Annexin V assay kit (BD Biosciences, USA) was used to analyze apoptosis in vitro. According to the manufacturer's instructions, 1×105 cells per tube were harvested and stained in triplicate with 5 ml of APC-Annexin V conjugate and 5 ml of propidium iodide (10 mg/ml) for 30 min in the dark. Afterwards, the samples were analyzed by FACSCalibur flow cytometer (Becton Dickinson, Franklin Lakes, NJ, USA) with CellQuest software. The apoptotic index was calculated as the percent of apoptotic cells.

The preparation of xenograft tumors was described in our previous study [21]. Tissue slides were prepared from the xenograft tumors by paraffin embedding. According to the manufacturer's instructions, TUNEL staining was performed by the DEAD END colorimetric TUNEL system (Promega). Apoptotic cells were analyzed by counting the total amount of TUNEL-positive nuclei in 10 random fields and excluding cells undergoing mitosis.

Statistical Package of Social Science (SPSS) software version 18.0 (SPSS Inc., Chicago, IL, USA) was used for statistical analyses. Univariate analyses were performed using Student's t-tests or one-way ANOVA. The correlations among expression levels of different genes were determined by using the Pearson correlation analysis. In all of the tests, statistical significance was defined as P<0.05.

As our previous study showed, Msi1-overexpressing SiHa and HeLa cells, as well as siMsi1-expressing SiHa and HeLa cells, were identified. Msi1 promotes the proliferation of cervical cancer cells both in vitro and in vivo by inhibiting the expression of P21, P27 and P53, which are key regulators of the G0/G1 phase to S phase transition in the cell cycle [21]. Furthermore, a flow cytometry-based apoptosis assay was also performed. As shown in Figure 1A and 1B, the percentages of apoptotic Msi1-overexpressing SiHa and HeLa cells were significantly lower than those of their respective control cells (SiHa-Msi1 vs SiHa-EGFP: P<0.05, Student's t-test; HeLa-Msi1 vs HeLa-EGFP: P<0.05, Student's t-test). In contrast, SiHa- and HeLa-siMsi1 cells exhibited higher percentages of apoptotic cells than their respective controls, which are shown in Figure 1C and 1D (SiHa-siMsi1 vs. SiHa-siCtr: P<0.05, Student's t-test; HeLa-siMsi1 vs HeLa-siCtr: P<0.05, Student's t-test). These results indicated that Msi1 maintained the survival of cervical cancer cells by not only promoting their proliferation but also inhibiting apoptosis in the cancer cells.

In 12 cervical cancer samples, Msi1nuclear staining score was 7.50±3.31 and PTEN nuclear staining score was 4.25±2.00. The scatterplot of PTEN and Msi1 correlation was shown in Figure 4C. The levels of PTEN were negatively correlated with the expression of Msi1 in these clinical samples, indicating that PTEN downregulation occurred in human cervical carcinoma tissues (Figure 4A-4C, r=-0.3843, P=0.0264). These results suggest that Msi1 might promote cervical cancer development by inhibiting apoptosis via PTEN. To confirmed the critical role of BAK in Msi1-PTEN-AKT pathway, rescue experiment was performed. Bz 423(10μM), an activating agent of BAK, was used to exert the expression of BAK in HeLa Msi1-overexpressing cells and respective control cells. As shown by western blot in Figure 4D and 4E, the expression of BAK were significantly rescued by Bz 423 in both HeLa-Msi1 cells and HeLa-EGFP cells (HeLa-EGFP+Bz423 vs HeLa-EGFP: P<0.05; HeLa-Msi1+Bz423 vs HeLa-Msi1: P<0.05, one-way ANOVA). The apoptosis of cervical cells was significantly increased in HeLa-Msi1 cells treated with Bz 423 compared with that in HeLa-Msi1 cells without Bz 423 treatment by the flow cytometry-based apoptosis assay (Figure 4F and G; HeLa-Msi1+Bz423 vs HeLa-Msi1: P<0.05, Student's t-test). These results suggested that BAK might play a functional role of apoptosis in Msi1-PTEN-AKT signaling. Furthermore, the analysis of cervical cancer samples and normal cervix samples data from GEPIA (gepia.cancer-pku.cn) also present a negative correlation between Msi1 and BAK (Figure 4H; r=-0.19, P=0.0009). 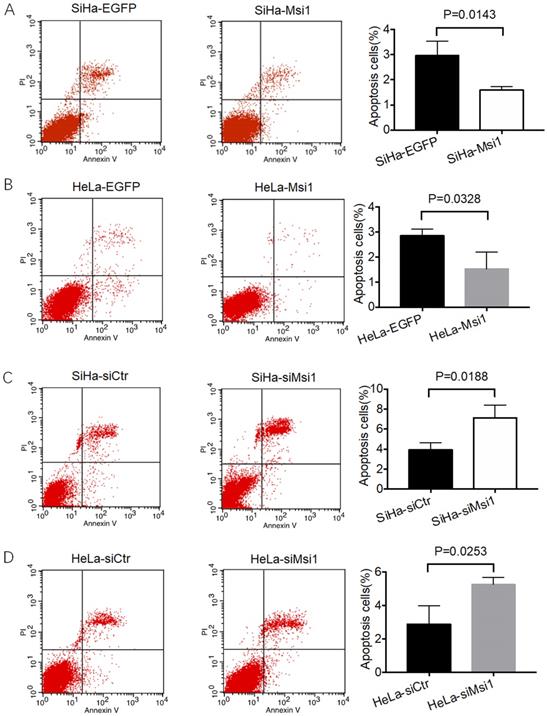 Exogenous Msi1 inhibited cervical cancer cell apoptosis in vivo. TUNEL assays were performed in triplicate on mouse xenograft tumors from the SiHa-EGFP and SiHa-Msi1 (A), HeLa-EGFP and HeLa-Msi1 (B), SiHa-siCtr and SiHa-siMsi1(D), HeLa-siCtr and HeLa-siMsi1 groups (E). Brown colored cells were pointed out as TUNEL+ cells. Scale bar= 100 μm for the main image and 50 μm for local image of TUNEL+ cells. (C) and (F), the data are presented as the mean±S.E.M. using Student's t-tests, and the respective P values are marked. 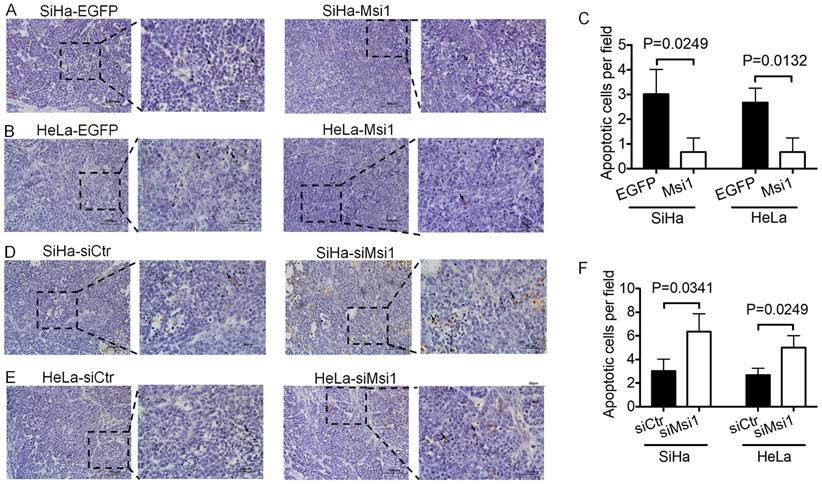 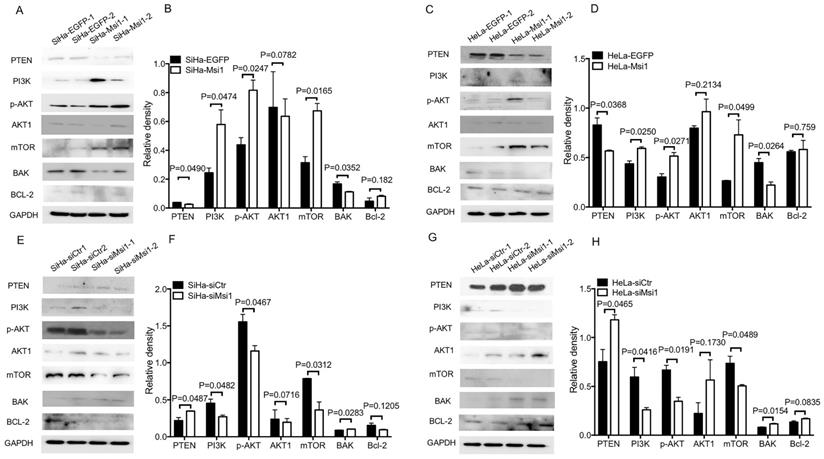 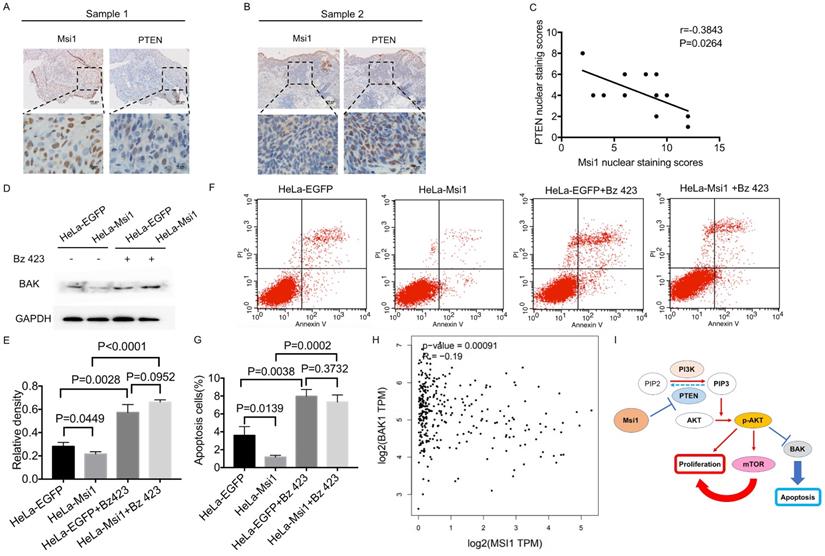 The occurrence and development of cervical cancer is a relatively long process. Although HPV infection is an important cancer-promoting factor, the abnormal expression of multiple tumor suppressors and promotors in the complex internal environment of the body are important factors for the continuous progression and worsening of cervical cancer. The survival of cancer cells depends on the proliferation of cells as well as the death of cells. Apoptosis is a classic form of cell death. Previous studies have shown that Msi1 can promote the proliferation of a variety of tumors cells [24]. Moreover, silencing of Msi1 induces apoptosis in esophageal squamous cell carcinoma and bladder carcinoma cells, while knockdown of Msi-1 by small interfering RNA (siRNA) promotes apoptosis in ovarian carcinoma [25, 26, 27]. Consistently, in our study, cervical cancer cells exhibited resistance to apoptosis in response to exogenous expression of Msi1 both in vitro and in vivo (Figures 1 and 2).

The correlation between Msi1 and PTEN in clinical samples was determined in our study, which suggested that Msi1 negatively regulated the expression of PTEN (Figure 4). Potential binding sites of Msi1 in the PTEN 3'-UTR were screened, and there were a total of 18 regions containing (G/A)U1-3AGU. It had been confirmed that Msi1 could bind to the 3' UTR of the PTEN mRNA, decreasing PTEN protein levels in human colorectal cancer (CRC) cells [34]. However, whether Msi1 binds to the motif in the 3'-UTR containing the above sequence still needs to be confirmed in cervical cancer cells. Furthermore, BAK was downregulated in Msi1 expressing cells, and was upregulated in rescue experiment of BAK in these cells, which lead to the increase of the number apoptosis cells. Correlation of Msi1 and BAK also exhibited a negative tendency analyzed by GEPIA (Figure 4). However, whether this effect is direct or indirect will be verified in our subsequent works.

18. Hong IS, Kang KS. The effects of Hedgehog on the RNA-binding protein Msi1 in the proliferation and apoptosis of mesenchymal stem cells. PLoS One. 2013;8:e56496