Objective: The purpose of this study was to evaluate the prognostic value of computed tomography (CT) texture features of pancreatic cancer with liver metastases.

Methods: We included 39 patients with metastatic pancreatic cancer (MPC) with liver metastases and performed texture analysis on primary tumors and metastases. The correlations between texture parameters were assessed using Pearson's correlation. Univariate Cox proportional hazards model was used to assess the correlations between clinicopathological characteristics, texture features and overall survival (OS). The univariate Cox regression model revealed four texture features potentially correlated with OS (P<0.1). A radiomics score (RS) was determined using a sequential combination of four texture features with potential prognostic value that were weighted according to their β-coefficients. Furthermore, all variables with P<0.1 were included in the multivariate analysis. A nomogram,which was developed to predict OS according to independent prognostic factors, was internally validated using the C-index and calibration plots. Kaplan-Meier analysis and the log-rank test were performed to stratify OS according to the RS and nomogram total points (NTP).

Conclusion: The RS derived from significant texture features of primary tumors and metastases shows promise as a prognostic biomarker of OS of patients with MPC. A nomogram based on the RS and other independent prognostic clinicopathological factors accurately predicts OS.

Pancreatic cancer is the seventh leading cause of cancer-related death worldwide, and its incidence closely parallels mortality [1]. Approximately 53% of patients with pancreatic cancer present with metastatic disease upon initial diagnosis [2]. The liver is one of the most common metastatic sites of pancreatic cancer, and patients with MPC with liver metastases experience much poorer prognosis than those with other metastatic patterns [3]. Although a small portion of patients with MPC can benefit in OS from targeted therapy and immunotherapy, cytotoxic chemotherapy remains the mainstay of treatment [4]. As we move towards an era of precision medicine, more information about the tumor facilitates decision-making that will improve patients' outcomes.

CT is routinely used in the diagnosis and efficacy evaluation of pancreatic cancer with size-based or shape-based measures of the tumor [5, 6]. However, the information acquired from CT is limited, because it mainly relies upon visual evaluations. Fortunately, recent research shows that the interpretations of CT images are augmented by texture analysis, which potentially reveals the underlying tumor biology [7]. Texture analysis of CT involves a computational process in which weakening CT levels among image voxels are spatially quantified to associate structural features of tumors with pixel variability [8]. The histogram-based method and spatial arrangement-based methods are most frequently used for texture analysis, and the corresponding texture features are evaluated using first-order statistics and higher-order statistics [9]. These methods are applied for detection, characterization, and monitoring of tumors [7, 10].

39 consecutive MPC patients with liver metastases treated at Changzhou No. 2 People's Hospital between January 2016 and June 2019 were retrospectively enrolled in this study. The inclusion criteria were as follows: (1) newly diagnosed, and pathologically confirmed pancreatic adenocarcinoma, (2) absence of concurrent cancer at another site, and (3) availability of complete records of baseline clinicopathological features. Demographic and clinicopathological features were collected from the electronic medical record. Informed consent was obtained from each patient and ethical approval was obtained by the Ethics Committee of Changzhou No.2 People's Hospital.

Contrast-enhanced CT examinations were performed using a 128-row dual-source CT scanner (SOMATOM Definition Flash, Siemens, Germany) at 120 kV, tube current modulation, and 1 mm reconstructed section thickness. All patients were instructed to fast for at least 8 h before the administration of intravenous contrast (Iohexol, 300 mg/ml, 80 ml, at a rate of 3 ml/s). After the injection of contrast agent, patients were subsequently subjected to double-helical scanning during the arterial and portal venous phases. The region of interest (ROI) was selected during the portal venous phase, because margins of pancreatic cancers are most consistently detected during in this phase.

ROIs were drawn on each slice of the primary pancreatic cancer and the liver metastases, using the Semantic Segmentation Editor. ROIs were subsequently extracted for texture analysis using Local Image Features Extraction (LIFEx, version 5.10, https://www.lifexsoft.org/). In the segmented tumors, the volume of interest (VOI) and histogram were calculated as first-order features. For calculations of second- and high-order texture features, the number of grey levels used to resample the ROI content was set to 64.0 as described in previous studies. The Cartesian coordinates for spatial resampling were 2.0 mm (X-direction), 2.0 mm (Y-direction), and 1.0 mm (Z-direction). Texture features were evaluated using four texture matrices, including the grey-level co-occurrence matrix (GLCM), the grey-level run length matrix (GLRLM), the neighborhood grey-level different matrix (NGLDM), and the grey-level zone length matrix (GLZLM). The texture features of the largest cross-section of each tumor and its corresponding liver metastases were used for further analysis.

Statistical analysis was conducted using R software (version 3.6.1, Institute for Statistics and Mathematics, Vienna, Austria). The correlations between texture variables were assessed using Pearson's correlation coefficient with the R package “psych”. A univariate Cox regression model was used to assess the correlations between clinicopathological characteristics, texture features, and OS. A radiomics score (RS) was calculated according to the results of univariate analysis, where RS = 0.280 × tGLZLM_LZE + 0.337 × tGLZLM_LZHGE + 0.334 × lKurtosis + 0.364 × lNGLDM_Busyness. In this formula, each variable was weighted using its β-coefficient derived from the Cox regression model. Variables with P<0.1 were included in the multivariate analysis. A nomogram was developed to predict OS according to independent prognostic factors using the R package “rms”. The internal validation of the nomogram was performed using the C-index and a calibration plot generated using bootstrapping with 1000 resamples. Kaplan Meier analysis and the log-rank test were performed to stratify OS according to groups of RS and nomogram total points (NTP).

The mean values and standard deviations of all texture features are listed in Supplementary Table 1, and the values of these features were normalized for further analysis.

The prognostic significance of the RS

In the univariate Cox regression model, four texture features were significantly correlated with OS (P<0.1, Table 2). The RS was determined using a sequential combination of these four features weighted according to their β-coefficients. Univariate analysis revealed that age, ECOG PS, weight loss, chemotherapy, CA19-9, the longest diameter of liver metastases, and the RS were correlated with OS. Furthermore, multivariate analysis showed that ECOG PS, chemotherapy, CA19-9, and the RS were independent prognostic factors for OS (each, P<0.05, Table 3).

A nomogram developed incorporating these independent prognostic factors (Figure 2) predicted the median OS and survival probabilities of patients with MPC at 3-month, 6-months, 9-months and 12-months. The nomogram achieved good discriminative ability (C-index = 0.754), compared with that (C-index = 0.712) of the model that did not incorporate the RS. After adjustment using bootstrapping with respective 1000 re-samples, calibration plot was used to compare the predicted with actual survival probabilities (Figure 3). All patients were divided into two groups according to the median value of NTPs to stratify OS. Kaplan-Meier analysis showed that the median OS of patients with NTPs greater than the median level was 4.1 months (95%CI, 2.8-5.4), which was significantly higher compared with that of patients with NTPs below the median level (median OS = 2.8 months, P=0.001, Figure 4).

Univariate and multivariate analysis of prognostic factors for OS

In this study, we used texture analysis to evaluate CT images of primary tumors and liver metastases of patients with MPC. We showed that the RS of significant texture features was an independent prognostic factors of OS, as revealed by unvariate analysis. A nomogram, which was based on RS and other independent prognostic clinicopathological factors, achieved good discriminative ability.

In univariate analysis, GLZLM_LZE and GLZLM_LZHGE of the primary tumor, as well as Kurtosis and NGLDM_Busyness of liver metastases, showed potential correlations with survival. Briefly, GLZLM reflects the size of homogeneous zones for each grey-level in three dimensions. LZE and LZHGE represent the distribution of the long homogeneous zones and its high grey-level subtypes, respectively. Furthermore, kurtosis reflects the shape of the grey-level distribution in the ROI. NGLDM_Busyness provides information on the spatial frequency of three-dimensional changes in intensities of grey-level between one voxel and its corresponding 26 neighbors. Generally, higher levels of these parameters reflect increased histological heterogeneity of the tumor and metastases, which will lead to poor prognosis of patients.

Here we show that the RS derived from the four aforementioned texture features was independently correlated with OS of patients with MPC with liver metastases. Furthermore, the nomogram, based on the RS, CA19-9, ECOG PS, and chemotherapy, achieved sufficient discriminative ability (C-index: 0.754), which was significantly higher compared with that of a model that did not incorporate RS (C-index: 0.712). These results suggest that the texture features of CT images play a pivotal role in predicting the outcome of patients with MPC with liver metastases. 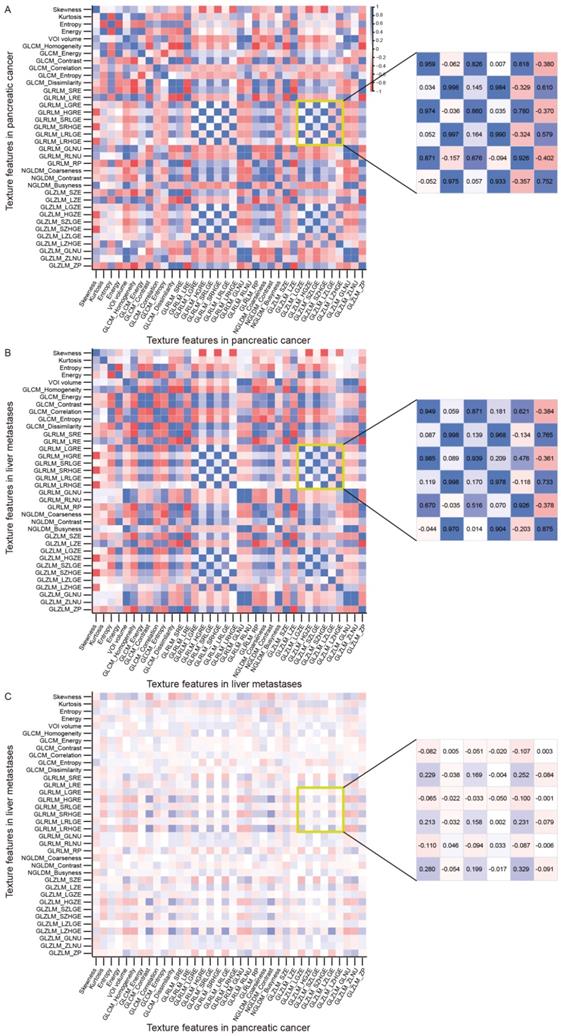 Prognostic nomogram for predicting 3-, 6-, 9-, and 12-month overall survival probability based on ECOG PS, liver metastases, CA19-9, and radiomics scores in pancreatic cancer patients with liver metastases. Each status of 4 independent factors has a corresponding value to the “Points” line at the top of the scale. Then the total point score was calculated by summing these 4 “Points” values. Based on the score, draw a downward vertical line from the “Total Points” line, predicting 3-, 6-, 9-, and 12- month survival probability in a given patient. 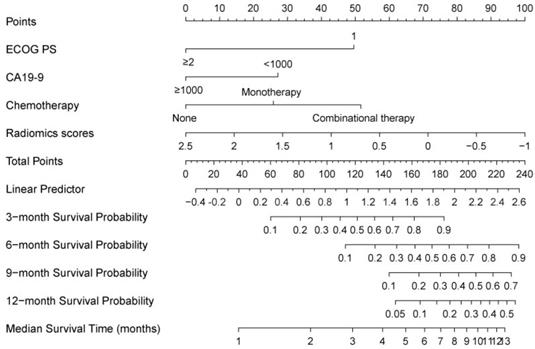 Calibration curves of the nomogram for the prediction of 3-month survival. The diagonal line: the ideal calibrated model. Black line: actual calibration. Circles: median. X: mean. 95% confidence intervals are depicted for each point along the calibration curve. 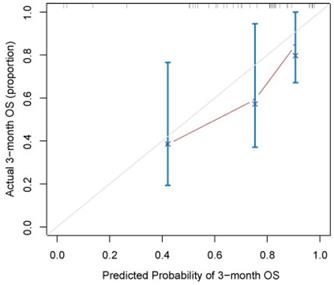 The limitations of our study include its relatively small sample size and relatively wider range of texture features, which may introduce bias. Furthermore, patients received different types of chemotherapy or BSC. The heterogeneity of treatment strategies may influence the outcome, although we included this variable in multivariate analysis. Moreover, the use of the regions encompassing the largest cross-section of the tumor and its corresponding liver metastases may not comprehensively reflect the lesion, because of intrinsic tumor heterogeneity. Independent cohorts are therefore required to externally validate our results, along with the demonstration of the reproducibility and prognostic value of these texture features.

In conclusion, the RS based on texture features of the primary tumor and liver metastases shows promise as a prognostic imaging biomarker for patients with MPC with liver metastases. The nomogram developed here incorporating the RS and prognostic clinicopathological valuables will serve to accurately predict the outcomes of patients with pancreatic cancer.

Kaplan-Meier analysis according to radiomics scores (A) and nomogram total points (B) in pancreatic cancer patients with liver metastases.