Breast cancer is one of the most common malignancies worldwide, while the luminal types (ERα positive) accounts for two third of all breast cancer cases. Although ERα positive breast cancer could be effective controlled by endocrine therapy, most of the patients will develop endocrine resistance, which becomes a headache clinical issue for breast cancer field. Endocrine resistance could be caused by multiple pathway disorders, the dys-regulation of ERα signaling might be a critical factor, which makes it urgent and important to reveal the potential molecular mechanism of ERα signaling. In our current study, we identified a new deubiquitination enzyme USP1 through screening the whole DUB (Deubiquitinases) siRNA library. The expression of USP1 is elevated in human breast cancer compared with normal mammary tissues. Importantly, USP1 expression levels are specially correlated with poor survival in ERα positive patients. USP1 depletion inhibited breast cancer cell progression and ERα signaling activity. Immuno-precipitation assays indicate that USP1 associates with ERα and promotes its stability possibly via inhibiting ERα K48-linked poly-ubiquitination. In conclusion, our data implicate a non-genomic mechanism by USP1 via stabilizing ERα protein controls ERα target gene expression linked to breast cancer progression.

ERα signaling was recognized as the major driver for breast cancer for more than 30 years [5]. Estrogen, which binds to ERα protein, has a critical role in mammary epithelial cell development and breast cancer proliferation via regulating cell cycle-related genes [6]. Estrogen-stimulated cell proliferation is activated through binding to ERα in the ligand-dependent manner. When ERα is activated, it endures the conformational change, trans-locates into the nuclear and promotes the ERα target gene expression through binding to their promoter regions. Several studies confirmed that breast cancer showed elevated ERα mRNA level due to dys-regulation of ERα by transcriptional factors or co-activators, which bind to ESR1 promoter regions [7, 8]. However, recently studies showed that the post-translational modifications, such as ubiquitination, sumoylation and phosphorylation, are also play important roles in regulating ERα protein stability or activity [9-11]. More importantly, the ubiquitin proteasome system has a center role in regulating ERα protein level, while several E3 ubiquitin ligases demonstrated to regulate ERα stability, including RNF31, TRIM56 and MDM2 [9, 12]. However, the ubiquitination process could be counteracted by deubiquitination. The DUBs (Deubiquitinases) function to cleave the ubiquitin chains from the substrate proteins and modulate protein stability or activity in several biological processes [13].

Despite the importance of DUBs in protein regulation, still little is known about DUBs function in regulation estrogen signaling in breast cancer. We did the screening of human DUBs for key regulators of ERα by DUBs siRNA library. Ubiquitin specific protease 1 (USP1) was observed to play critical role in ERα signaling in breast cancer. Previous studies showed that USP1 was located in the nuclear, while it regulated cell cycle progression and DNA damage response. Several oncological studies showed that USP1 was elevated in a few human cancers and mediated chemotherapy resistance [14, 15]. In our current study, we reported USP1 associated with ERα, inhibited ERα poly-ubiquitination and degradation in breast cancer cells, which indicated that USP1 linked to breast cancer proliferation and invasion via estrogen signaling.

The Flag-USP1 plasmid was acquired from Origene. The HA-K48 and Ub wild type plasmids were acquired from our previous study [9]. The ESR1 plasmid was acquired from previous studies [17]. The Lipofectamin 2000 (1662298, Invitrogen) was used for the plasmids transfection. Small interfering RNAs were used for specific gene knocking-down. The USP1 siRNA sequences were: GUAUACUUCAGGUAUUAUAdTdT; UAUAAUACCUGAAGUAUACdTdT and CCAUACAAACAUUGGUAAAdTdT; UUUACCAAUGUUUGUAUGGdTdT. The negative control siRNA sequences were: UUCUCCGAACGUGUCACGUTT; ACGUGACACGUUCGGAGAATT. The RNAiMAX reagent (13778150, invitrogen) was used for siRNA transfection.

MCF-7 cells were transfected with siUSP1 or siControl into 24-well plates. Twenty-Four hours after transfection, the cells number was countered and 4000 cells were seeded into 96-well plates. The relative cell viability was measured at indicated time points. Cell numbers were determined using the WST-1 cell proliferation reagent as previously described.

For ethynly-deoxyuridine (EdU) labeled DNA, cells were incubated with EdU for 2 hours. Later on, the cells were fixed in cell culture plates with 4% formalin. The EdU positive cells were counted with statistical analysis.

Fifty nM USP1 siRNA or siControl were transfected into MCF-7 cells. After twenty-four hours, cells were seeded into 12-well paltes with 1%FBS. The cells were 100% confluence. The yellow pipette tips were applied for straight scratch. The wound distance was measured at indicated time points and normalized with starting time point. The wound healing recovery was expressed as: [1-(Width of the wound at a given time/width of the wound at t=0)] ×100%.

About 105 MCF-7 cells were seeded into twenty-four well plates and transfected with 50 uM USP1 siRNA or siControl. After 48 h, cells were treated with 100 uM cycloheximide (C7698, Sigma) for indicated time points. Samples were subject to western blot for ERα degradation.

Immunoprecipitation was performed as described in previous study [18]. The MCF-7 total cell lysls were pre-cleared with rabbit IgG for 2 h and subsequently immunoprecipitated with ERα antibody (SC8005, Santa Cruz) over night, while rabbit IgG (Santa Cruz) was used as the negative control. The bounded protein was analyzed by Anti-USP1 (SAB1406575, Sigma). For the overexpression experiment, HEK293 cells were transfected with 5ug GFP-USP1 and ERα plasmid in 10 cm dish. Cell lysates were pre-cleared with IgG and subsequently incubate with GFP (Ab290, Abcam) antibody, while rabbit IgG was used as the negative control. The bound proteins were analyzed by western blotting.

To directly detect the enriched overall ubiquitinated or K48-linked ubiqutinated ERα from the cell extracts, HEK293 cells were transfected with 4 ug Ub or 4 ug K48 Ubi plasmid, 2 ug ERα together with 0.5 ug Flag-USP1 or Flag-vector. After 48 h, cells were treated with 10uM MG132 and then the total protein was extracted and pre-cleared with 20ul protein A (santa cruz, SC-2001) for 2 h. The supernatant was collected and immunoprecipitated by ERα antibody. Western blot with HA antibody was performed to detect K48 poly-ubiquitinated ERα.

Student's t-test, Pearson correlation coefficient, and Cox regression analysis were used for comparisons. A P-value of < 0.05 was considered to be significant.

USP1 is required for ERα signaling activity, which is elevated in human breast cancer and relates to poor survival in ERα positive breast cancer patients

In order to identify the DUBs, which were required for ERα signaling in breast cancer, we utilized the DUBs siRNA library to silence each DUBs in MCF-7 cell. We used the classical ERα target gene to indicate the ERα signaling activity (Fig. 1A). The real-time PCR data showed that USP1 depletion dramatically inhibited GREB1 expression compared with siControl (Fold Change=0.48) (Fig. 1B). We further investigate the expression of USP1 in human breast cancer in public available datasets. The TCGA data showed that USP1 was elevated in human breast cancer compared with normal breast tissue (Fig. 1C). Besides, the expression of USP1 was correlated with poor survival in breast cancer (Fig. 1D). When we stratified the data, we found that the survival correlation only existed in ERα positive breast cancer group, but not in ERα negative breast cancer group (Fig. 1E-F). 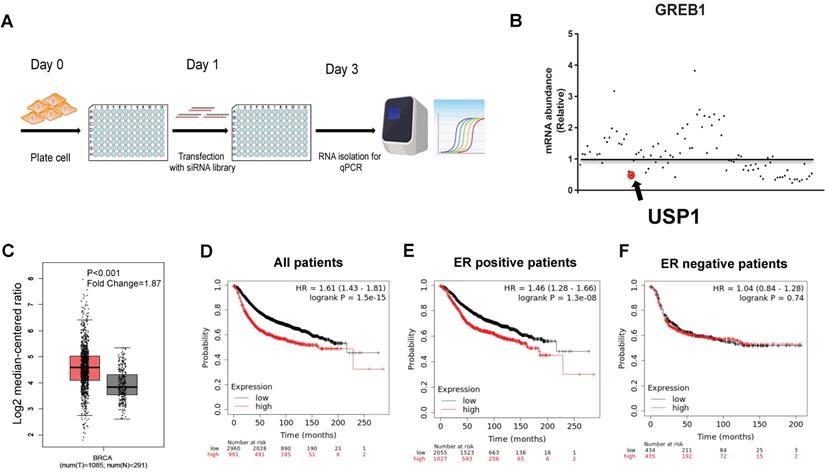 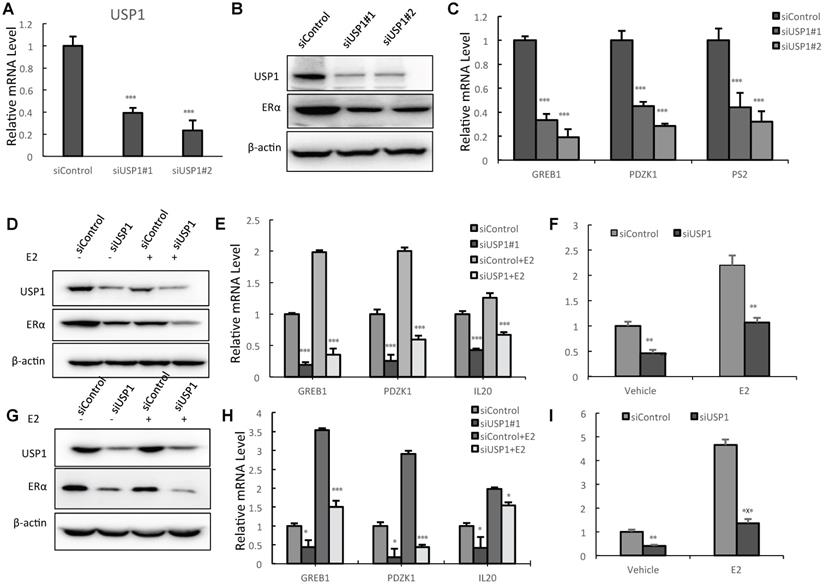 We further overexpressed USP1 in MCF-7 cells and the WB data showed that USP1 could promote ERα protein level (Fig. 4A). The immuno-staining assay showed that both USP1 and ERα were located in the nuclear (Fig. 4B). The endogenous immuno-precipitation showed that USP1 could interact with ERα in MCF-7 cells (Fig. 4C). Since USP1 could associate with ERα in breast cancer cells, we further investigate the biological effect of such interaction. Since ERα could regulate its own expression, making it difficult to distinguish direct effects of USP1 on ERα mRNA or protein levels in the cell line. We utilize HEKC293 cells to investigate the mechanism. Co-transfection of ERα and USP1 in HEK293 cells shows that USP1 could increase ERα protein level, which effect could be minimized with the presence of the proteasome inhibitor MG132 (Fig. 4D). The protein half-life assay shows that USP1 could increase the protein stability of ERα (Fig. 4E). 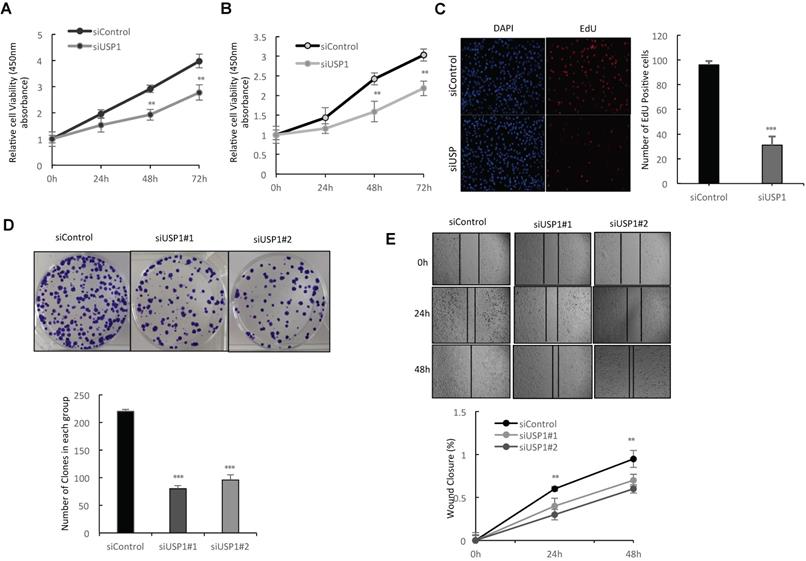 In our study, we identify a novel hit from DUBs siRNA genomic screening. We identify that USP1, which are elevated in human breast cancer samples and related to poor survival in ERα positive breast cancer patients. Besides, USP1 depletion inhibited ERα signaling activity and estrogen-stimulated cell proliferation and invasion. The mechanistic experiments revealed that USP1 associated with ERα and increased ERα stability via prohibiting ERα K48-linked poly-ubiquitination in breast cancer cells (Fig. 5C).

ERα belongs to the superfamily of nuclear receptor, which is encoded by ESR1 gene [19]. The ERα protein consists of four family members, including one DNA binding domain, one ligand binding domain and two transcriptional activation domains [20]. When ERα is activated by estrogen, it shuttles from the cytosol into the nuclear, which subsequently binds to the estrogen response element in the DNA and activates ERα target gene expression [6, 21]. ERα is elevated in breast tumors and becomes the major driver for ERα positive cancer types [22]. Based on the importance of ERα, targeting ERα signaling could be an effective strategy. The selective estrogen receptor modulators, such as tamoxifen, are the first line therapy for ERα positive breast cancer patients [21]. However, most of the endocrine therapy patients will develop drug resistance, while the molecular mechanisms are not totally clear. Surprisingly, most of endocrine resistance breast tumors sill maintain ERα expression, which indicates the possibility that ERα also plays important roles in endocrine resistance [23]. Base on this, modulating ERα protein expression and stability could be a plausible way for breast cancer therapeutics and endocrine resistance.

The protein ubiquitination process is counterbalanced by deubiquitination enzymes, which remove the ubiquitin chains from the target proteins. Currently, there are approximately 100 DUBs, while the USPs are the largest groups [24]. Even several E3 ubiquitin ligases were reported to regulate ERα signaling in breast cancer, the process that how DUBs counteract with E3 ligases and facilitate ERα signaling is still not clear. We performed the DUBs siRNA screening for key deubiquitinases that controlled ERα signaling and identified USP1 as one of the major player. The USP1 gene was firstly identified in 1998, which protein is composed of 785 amino acids [25]. The catalytic domain is located in the C-terminal of USP1 protein. Several studies confirmed that USP1 modulated DNA repair process via stabilizing a few DNA binding proteins [26]. USP1 had low prevalence in gene mutation, but was elevated in several human cancers [15]. In breast malignancy, USP1 was shown to promote triple negative breast cancer progression, but its function in ERα positive type is not clear [27]. Our study showed that USP1 stabilized ERα via inhibiting K48-linked poly-ubiquitination of ERα, which provided a novel insight of DUBs in modulating hormone signaling and breast cancer progression.

In conclusion, we identified an interesting deubiquitinase USP1 in facilitating ERα signaling in breast cancer cells. USP1 could promote breast cancer cell invasion and proliferation via stabilizing ERα protein. As a novel modulator of ERα signaling, disturbing USP1 activity or affecting USP1 expression could be a plausible way to treat luminal types of breast cancer. 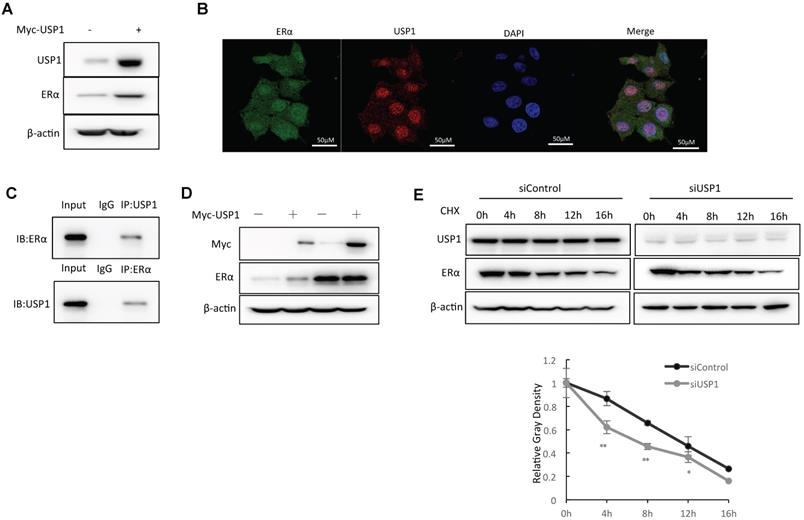 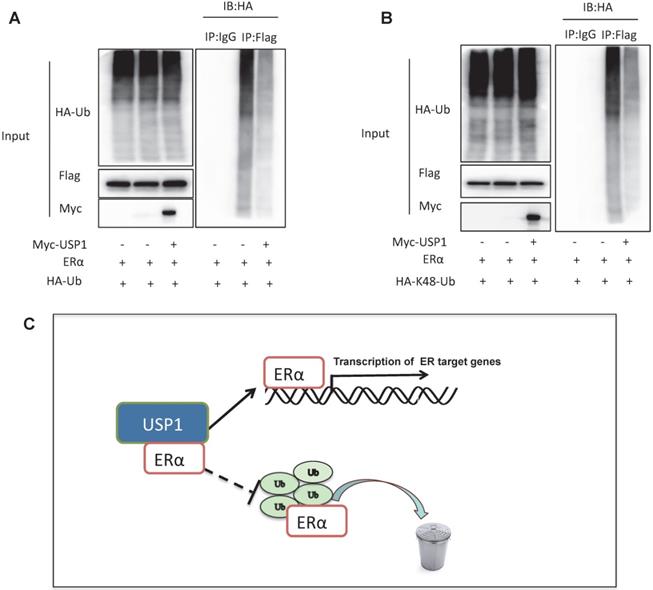 We thank all the members of the Henan Key Laboratory of Immunology and Targeted Drugs, School of Laboratory Medicine, as well as all members of the Department of General Surgery in Second Hospital of Shandong University; for sharing valuable material and research support.