Materials and methods: Breast cancer patients who received neoadjuvant treatment (NAT) with clinical early response assessment from October 2008 to October 2018 were retrospectively analyzed. Clinical early response was defined as tumor size decreasing ≥30% evaluated by ultrasound after two cycles of NAT. Chi-square test was used to compare the pCR rates between the responder and non-responder groups with different molecular subtypes. Multivariate logistic regression was used to identify independent factors associated with the pCR.

As a result, achieving pCR becomes quite an important aim for better outcomes in NAT. The reported pCR rates varied with different phenotypes from 0% to 79% in previous studies [6]. The tumor biology is a critical factor associated with pCR after NAT, estrogen receptor (ER) and progesterone receptor (PR) negativity, human epidermal growth factor receptor-2 (HER2) positivity, high mitotic count and Ki67 score were correlated with pCR[6, 7]. A retrospective study from Memorial Sloan Kettering Cancer Center (MSKCC) found that patients with HER2 positive tumors had the highest pCR rate and the lowest pCR rate appeared in the hormone receptor (HR) positive HER2 negative subgroup [8].

Therapeutic response differs individually in breast cancer patients and clinical response is a method for early evaluation. Aside from molecular markers, clinical response to initial cycles of neoadjuvant chemotherapy appeared to be associated with the pCR rate [9]. Therefore, early identification of clinical response in neoadjuvant therapy may help us to select those who are responsive to initial regimens. For non-responders, it may provide an opportunity to get an alternative therapy. Few studies evaluated the predictive value of early response assessed by ultrasound for pCR in different breast cancer molecular subtypes and survival. In this study, we aimed to evaluate the association of clinical early response and pCR rate in breast cancer patients with different molecular subtypes as well as survival outcome.

Clinical response assessment was performed by three-dimensional (3D) ultrasound before NAT and after two cycles of NAT. The tumor response can be classified into four types: complete response (CR, disappearance of all target lesions), partial response (PR, at least a 30% decrease in the sum of diameters of target lesions), progressive disease (PD, at least a 20% increase in the sum of diameters of target lesions) and stable disease (SD, neither PD nor PR) according to the Response Evaluation Criteria in Solid Tumor (RECIST) version 1.1[10]. Patients with CR or PR after two cycles of NAT were defined as responders and patients with PD or SD were defined as non-responders. Pathological response was evaluated after surgery. pCR in breast was defined as absence of invasive cancer in the breast, irrespective of DCIS or nodal involvement (ypT0/is) [11].

Between October 2008 and October 2018, 640 invasive breast cancer patients receiving preoperative treatment were collected from SJTU-BCDB. Among them, 328 patients who were treated with 4 or more cycles of NAT and assessed for clinical early response by 3D ultrasound were included in the subsequent analyses (Figure 1). Among those patients, 100 were responders and 228 were non-responders. 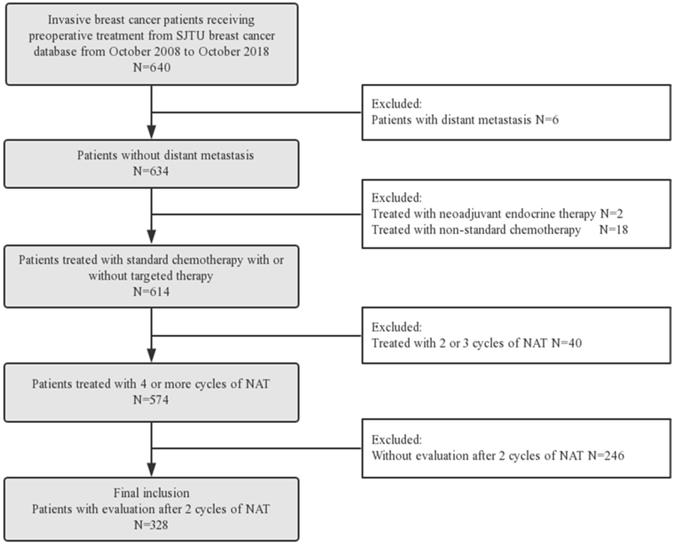 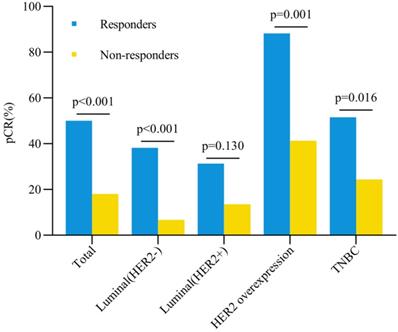 Clinicopathological factors and pCR in Breast 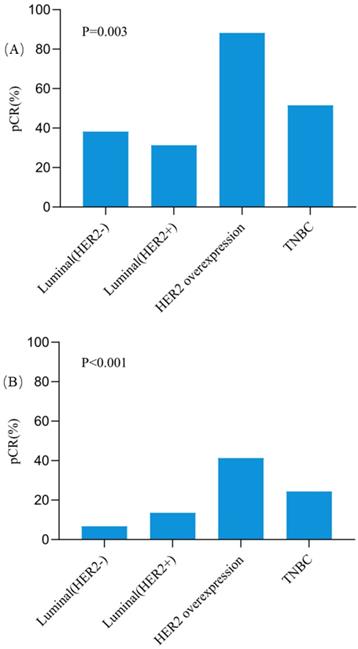 Clinical early response to NAT was an excellent predictor for pCR in breast. Our current study showed that early response was significantly associated with a higher pCR rate in breast cancer patients receiving NAT, especially for patients with HER2 overexpression subtype. 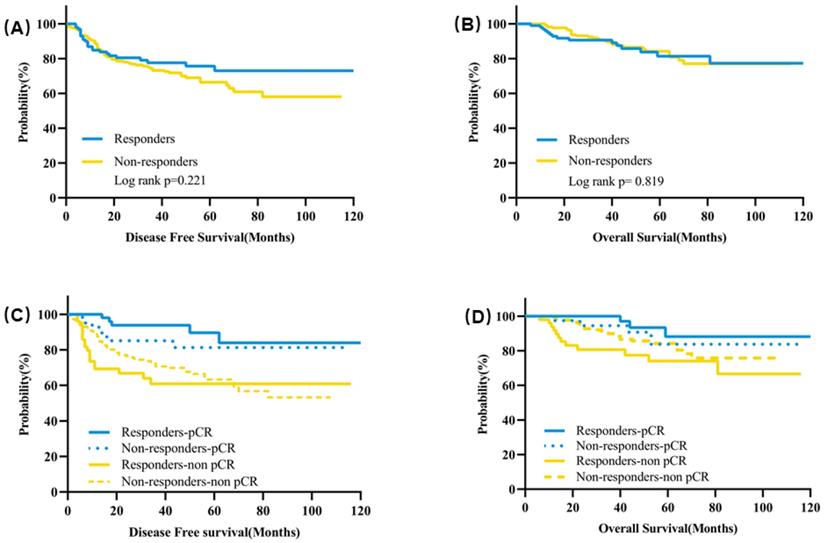 Multivariate analysis of factors associated with pCR in Breast

Neoadjuvant therapy is the preferred treatment of locally advanced breast cancer for the purpose of creating surgery opportunities [12]. An increasing number of operable breast cancer patients also receive NAT, which provides us an opportunity to observe the tumor shrink and response to neoadjuvant regimens, especially in the clinical trial for new drug development [1]. In the NeoSphere trial, the addition of pertuzumab to trastuzumab and docetaxel resulted in significantly higher pCR rates [13], accelerating the approval of pertuzumab in the neoadjuvant treatment of HER2 positive breast cancer by the Food and Drug Administration (FDA) [14]. Although the overall survival benefit of NAT remained controversial and even a higher local recurrence rate after breast conserving surgery was found in patients receiving NAT than those treated in the adjuvant setting [4], patients achieving pCR after NAT had better DFS and OS than patients with residual tumors [5, 6]. Our study also confirmed that patients with pCR after NAT had significantly better DFS and OS than patients not achieving pCR in the responder group.

To date, three main methods were reported for early response assessment in neoadjuvant treatment of breast cancer: 18F-FDG PET/CT, dynamic contrast enhanced MRI (DCE-MRI), and ultrasound [9, 15, 16]. Meta-analysis showed that 18F-FDG PET/CT had a moderate accuracy for the early prediction for pCR (sensitivity 85%, specificity 79% and diagnostic odds ratio 21.8), especially in HER2 positive and triple negative breast cancer [16, 17]. DCE-MRI was also an effective method for early monitoring the efficacy during NAT (sensitivity 87%, specificity 82% and diagnostic odds ratio 30.3) [18]. However, both 18F-FDG PET/CT and DCE-MRI require sophisticated imaging, additional radiation dose for patients, and less accessible compared with ultrasound. A systemic search in PubMed was performed, nine studies on the early prediction for pathological response by ultrasound in breast cancer are summarized in Table S4 [9, 19-26]. The diagnostic accuracy for pathological response with different parameters assessed by ultrasound during NAT was performed in eight studies and showed moderate results with different sensitivity and specificity. Among these studies, only two had estimated pCR rate different between early responders and non-responders, which were also not analyzed and compared among different subtypes [9, 19].

The pCR rates varied among different molecular subtypes. In a retrospective study with 13,939 breast cancer patients, patients with the Luminal A subtype had the lowest pCR rate (0.3%) and the highest pCR rate was observed in HER-2 positive patients (38.7%) [27]. Most of previous studies supported that patients with HER-2 positive breast cancer who received chemotherapy combination with targeted therapy achieved the highest pCR rate, especially those treated with dual targeted therapy [8, 27, 28]. The total clinical response rate was 30.5% in our study and responders had a significant higher pCR rate than non-responders (50% vs 18%). To our knowledge, no previous studies had ever focused on the predictive value of clinical early response for pCR in different molecular subtypes. In our study, its predictive value was largely independent of the molecular subtypes as except for Luminal (HER2+) group, responders had significantly higher pCR rates than non-responders in other three subgroups. The highest pCR rate was 54% in HER2 overexpression patients and responders achieved a pCR rate of up to 88.2%, which was analogous to patients receiving dual HER-2 blockade in combination with chemotherapy reported previously [13, 29-32]. The unexpected results indicated that patients with HER2 overexpression in breast cancer and have excellent early clinical response to NAT with chemotherapy and trastuzumab, do not need escalation of dual anti-HER2 therapy. However, we also found that the Luminal (HER2+) subset was not benefit from clinical early response. Previous trials had showed that the pCR rates were higher in HER2+/HR- patients than HER2+/HR+ patients [32, 33]. Von Minckwitz and colleges also demonstrated that pCR was a surrogate end point for patients with triple negative, Luminal B/HER2-, and HER2 positive breast cancer but not for patients with Luminal B/HER2+ disease [34]. Therefore, the Luminal (HER2+) breast cancer was a special subtype that needed further clinical trials exploring novel systemic treatments. We also analyzed the pCR in breast and node (ypT0/isN0) and found the similar results in the whole population and different molecular subsets (Figure S1). Neoadjuvant regimens and treatment cycles may also influence treatment response [5, 35]. However, there were no differences for pCR rates between patients receiving different chemotherapy regimens or different NAT cycles in our study. While patients treated with trastuzumab had significantly higher pCR rates than those without trastuzumab treatment (Tables 3 and 4).

There were some limitations of the study. Firstly, it was a retrospective study and neoadjuvant treatment regimens and cycles were diverse across patients. Secondly, as a single center analysis, patient numbers included in our study was not so large, especially for subgroup analysis. Thirdly, we could not validate our findings and conclusions with an independent cohort.

In conclusion, clinical responders after two cycles of NAT had a significantly higher pCR rate than non-responders. The predictive value of clinical early response was mainly observed in HER2 overexpression, triple negative, and Luminal (HER2-) breast cancer patients. Particularly, responders with HER2 overexpression subtype treated with trastuzumab had the highest pCR rate, which was analogous to those receiving dual HER2 blockade in previous literatures. Clinical early response after NAT may serve as an excellent marker for clinical decision making, deserving further clinical validation.

The authors gratefully thank all the patients participating in this study and the staff at our center for their work and support of this study.

KWS and XSC developed the main concept and played an important role in the study design. JH, JYW, OH, JRH, LZ, WGC and YFL contributed to the patients' data collection and follow-up. JH and XSC performed the data analysis and interpretation. JH drafted the manuscript. XSC and KWS contributed to editing and critical revision of the manuscript. All authors reviewed and approved the final draft.

The protocol was reviewed and approved by the independent ethical committee/institutional review board of Shanghai Ruijin Hospital affiliated with Shanghai Jiao Tong University School of Medicine. All procedures performed in studies involving human participants were in accordance with the ethical standards of the committee and with the 1964 Helsinki declaration and its later amendments or comparable ethical standards.