Transforming growth factor β1 (TGF-β1) plays an important role in tumor initiation and development by inducing epithelial-mesenchymal Transition (EMT). Metastasis-Associated Lung Adenocarcinoma Transcript 1 (MALAT1) is a long noncoding RNA (lncRNA) that contributes to the invasion and metastasis of tumors, including esophageal squamous cell carcinoma (ESCC). The aim of the present study was to explore the underlying mechanisms implicated in EMT and to clarify whether TGF-β1 regulates MALAT1 expression, thereby promoting the invasion of ESCC. Expression of TGF-β1, MALAT1 and EMT-related markers, including E-cadherin and Vimentin, was detected in clinical samples of Kazakh's ESCC. The role of TGF-β1 in the regulation of MALAT1 in ESCC invasion was evaluated at the ESCC cell line level. High TGF-β1 expression was significantly associated with poor survival among patients with Kazakh's ESCC. Additionally, the expression of Vimentin was upregulated, and the expression of E-cadherin was downregulated and varied. The expression of MALAT1 positively correlated with the expression of TGF-β1 both in vivo and in vitro. Furthermore, knockdown of MALAT1 inhibited TGF-β1-induced EMT. Our data indicate that MALAT1 is heavily involved in EMT induced by TGF-β1. MALAT1 may be a therapeutic target in the suppression of metastasis and invasion of ESCC.

Esophageal cancer (EC) is the eighth most aggressive cancer and is the sixth leading cause of cancer death globally [1, 2]. The dominant type of EC worldwide is esophageal squamous cell carcinoma (ESCC), with the highest incidence rates in populations within Southeastern and Central Asia [3, 4]. People of the Kazakh ethnicity in Xinjiang, China, have the highest incidence of ESCC [5]. Unless diagnosed at a very early stage, patients present with widespread metastasis where current treatment is largely ineffective [6, 7]. Therefore, understanding the specific causes of metastasis in patients with ESCC is essential for improving the prognosis of ESCC.

Based on recent studies, we postulated that MALAT1 may promote the invasion of ESCC through TGF-β1-induced EMT. Therefore, the expression levels of TGF-β1, MALAT1 and EMT markers in ESCC specimens were evaluated, and their correlations were validated. The role of MALAT1 in regulating ESCC metastasis at the cellular level was also evaluated. These results indicate that MALAT1 is an important mediator of TGF-β1-induced EMT in ESCC.

Forty-three pairs of fresh frozen samples, as well as seventy-two pairs of formalin-fixed paraffin-embedded (FFPE) timorous and healthy adjacent tissues of Kazakh's ESCC, were obtained from the First Affiliated Hospital of Xinjiang Medical University. Primary ESCC tissue areas and normal adjacent tissue (NAT) from the same patients were separately excised by experienced pathologists. The study was approved by the local research ethical committee, and signed informed consent was obtained from all the patients. None of the patients received any treatment before surgery.

The expression of TGF-β1, E-cadherin and Vimentin in 72 pairs of ESCC samples was detected by IHC. After deparaffinization and antigen retrieval, sections were incubated at 4 °C overnight with primary antibodies at a specified dilution (TGF-β1 1:50, Santa Cruz, E-cadherin 1:50, Cell Signaling Technology, Vimentin 1:100, Cell Signaling Technology, USA). Then, sections were incubated with secondary antibody at a 1:800 dilution (Abcam, USA) for 60 min at 37 °C. Finally, sections were incubated with streptavidin-horseradish peroxidase complex and stained with diaminobenzidine Kit (Beijing Zhongshan Golden Bridge Biotechnology Co, Ltd). Staining was assessed with regard to intensity (0: no intensity; 1: weak intensity; 2: moderate intensity; 3: strong intensity) and percentage (0: less than 10%; 1: between 10% - 25%; 2: between 25% - 50%; 3: more than 50%) of positive cells. Based on the total score (staining intensity plus positive cell score), the results were classified as the 'negative expression' group (total score: 0-2) and the 'positive expression' group (total score: 3-6).

Cells were plated onto glass bottom cell culture dishes (NEST, 801001). After treatment with recombinant TGF-β1 or TGF-β1 inhibitor, cells were washed with PBS and fixed with 95% ethanol. Then, 0.5% Triton X-100 was added before incubation with anti-TGF-β1 or E-cadherin antibodies (1:200, Abcam Corporation). After washing with PBS, the cells were incubated with anti-rabbit IgG Fab2 Alexa Fluor 494 (rabbit)-conjugated secondary antibody (Cell Signaling Technology) for 2 h at room temperature. The nuclei were simultaneously counterstained with Hoechst 33258 (0.05 mg/mL, Santa Cruz Biochemical). Expression of indicated proteins in cells was observed and quantified by fluorescent confocal microscopy (LeicaTCSSP8).

Cells were plated at a density of 4×103 cells per well in 96-well plates. MTT assays were performed at indicated time points. The absorbance was recorded at 490 nm. Relative cellular growth was determined based the ratio of the average absorbance in treated cells to that in control cells.

Cells were plated into 6-well plates and cultured for 24 h. After transfection with siRNA, a perpendicular linear scratch was made using a sterile pipette tip. The wound was measured at the indicated times.

Transwell assays of cell invasion were performed as previously described [23]. Cells found on the lower surfaces of the Matrigel-coated membranes indicated invasion, and the number of cells was counted under a light microscope.

The Annexin V staining procedure was followed according to the instructions provided by the manufacturer (Invitrogen, USA). Cells were analyzed by flow cytometry (FCM) in triplicate.

Statistical analysis was performed using SPSS version 17.0 software. Differences between groups were calculated with Student's t-test. Associations between protein expression and pathological parameters were assessed by the Pearson chi-square test. Overall survival curves were plotted according to the Kaplan-Meier survival function with a log-rank test. A P value less than 0.05 was considered statistically significant.

MALAT1 was positively associated with TGF-β1

MALAT1 promoted the invasion of ESCC via TGF-β1-induced EMT

To define the functional links between MALAT1 and EMT, we first examined the effects of MALAT1 knockdown on E-cadherin and Vimentin expression. As shown in Fig. 6 and Fig. 7, MALAT1 knockdown significantly enhanced E-cadherin expression and reduced Vimentin expression at the protein level in Eca109 cells. More importantly, knockdown of MALAT1 significantly suppressed cell proliferation and migration, reduced invasion, and enhanced cell apoptosis (Fig. 6, Fig. 7, Fig. s1, Fig. s2). These results demonstrated that MALAT1 promoted invasion of ESCC via EMT. As we have already shown, TGF-β1 can induce EMT in ESCC, and MALAT1 is an important promoter of EMT; however, direct evidence that MALAT1 promotes TGF-β1-induced EMT in ESCC is still lacking. Here, MALAT1 siRNA was transfected into ESCC cells after TGF-β1 inhibitor treatment. Although TGF-β1 inhibition increased the expression of E-cadherin, knockdown of MALAT1 significantly increased the expression of E-cadherin after TGF-β1 inhibition (Fig. 7C). These results confirmed our hypothesis that MALAT1 promotes TGF-β1-induced EMT. 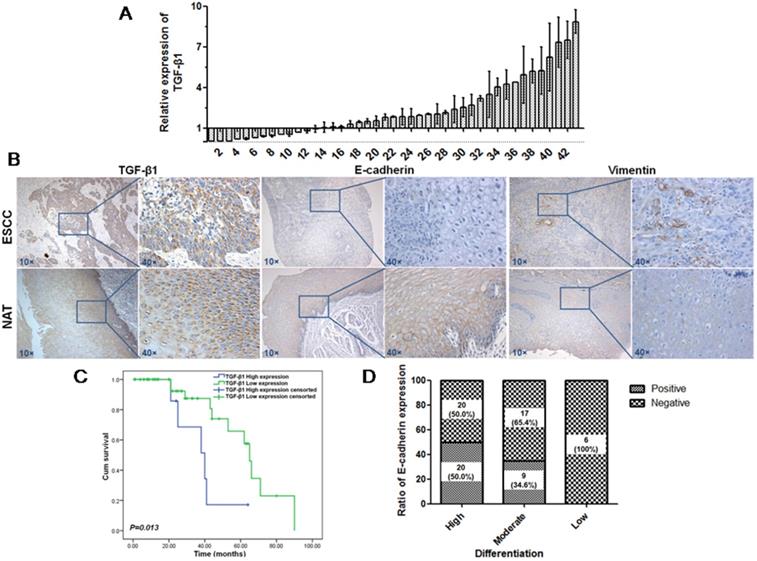 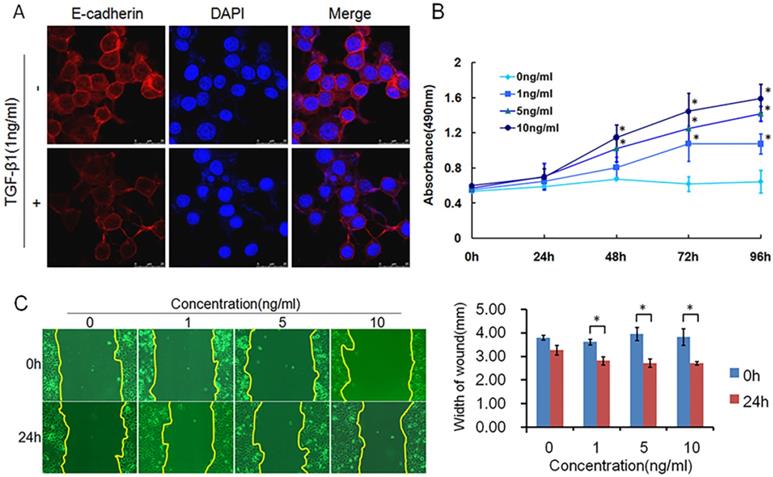 ESCC is considered one of the leading causes of cancer-related deaths in China, due to its high incidence and aggressive nature. Although surgery and chemoradiotherapy are widely used in ESCC patients, their prospects for full recovery are still poor. Due to the lack of effective therapeutic options that could enhance the patient survival rate, an increasing number of studies are focused on the mechanism of invasion and metastasis in ESCC. In varying ways, EMT induced by TGF-β plays an important role in the progression of invasion and metastasis of ESCC. However, the pathological significance and the underlying process of EMT still need to be investigated. Akt is likely to have an important role in EMT induced by TGF-β1 in ESCC and may contribute to invasion and metastasis [28]. Li and his group reported that ESCC tissues exhibited upregulated expression of TGF-β1, especially in Kazakh patients in Xinjiang, China [28, 29]. TGF-β stimulated the smad2/3 signaling pathway, inducing EMT and consequently leading to malignant changes. In this study, we analyzed Kazakh's ESCC patients with high expression of TGF-β1 who have a poor prognosis. Furthermore, our results indicated that lncRNA MALAT1 participates in the progression of TGF-β1-induced EMT.

Correlation between E-cadherin and pathological parameters 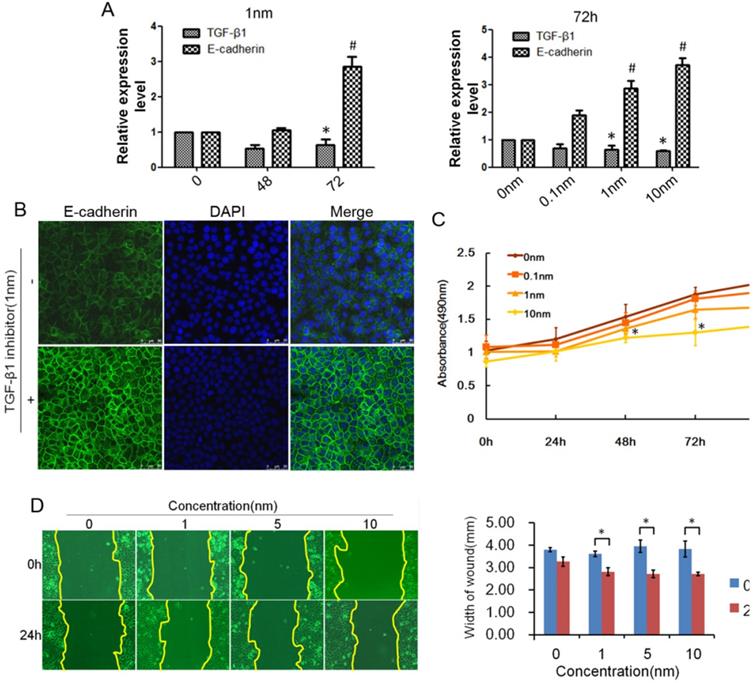 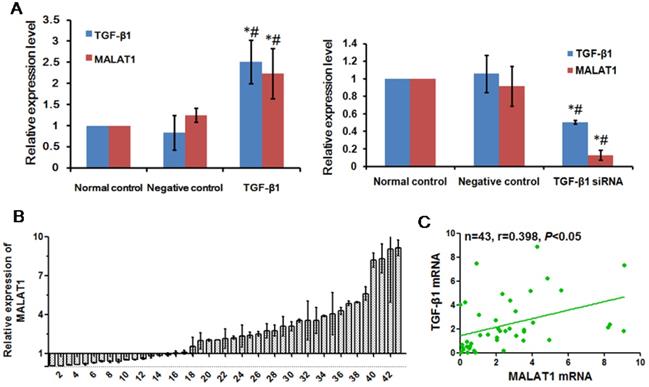 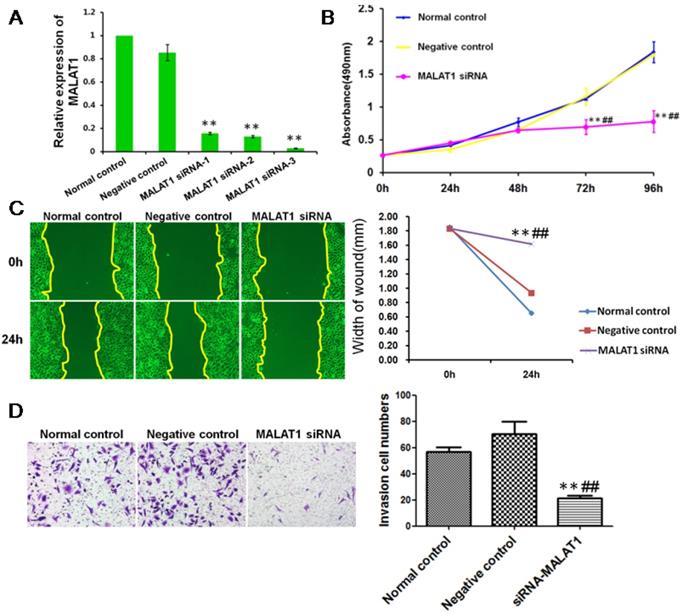 MALAT1 promoted invasion of ESCC via TGF-β1-induced EMT. (A) FCM showed that knockdown of MALAT1 significantly enhanced cell apoptosis. (B) Expression of E-cadherin and Vimentin after MALAT1 knockdown were detected by Western blot. (C) Western blot analysis of the expression of E-cadherin after knockdown of MALAT1 and TGF-β1 inhibition. (**: compared with normal control, P<0.01; ##: compared with negative control, P<0.01). 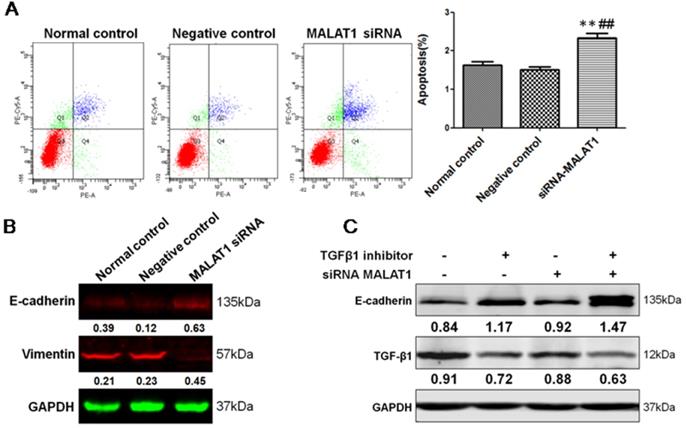 Upregulation of MALAT1 has been found in various cancers and more recently in ESCC. The up-regulation of MALAT1 in ESCC tissues can impact the degree of tumor progression and is predictive of postoperative survival [30]. Although its dysregulation is considered a marker for metastatic development, the functional role of MALAT1 in this process is only beginning to emerge. The mechanism by which MALAT1 contributes to cancer progression is through induction of EMT. Fan Y and colleagues showed that upregulation of MALAT1 promotes bladder cancer metastasis induced by TGF-β [31]. Wang Y et al [32] evaluated expression variation of MALAT1 after treated with TGF-β, finding that TGF-β significantly induced malat1 levels in human head and neck squamous cell carcinoma cells; subsequent similar work by Du MY et al [33] detected MALAT1 expression variation in 6-10B cells treated with TGF-β by way of qRT-PCR, showing that TGF-β treatment increased MALAT1 expression in nasopharyngeal carcinoma. The two independent studies fundamentally established the relationship between TGF-β1 and MALAT1 in outline; although the detailed regulation remains to be fleshed out with more data and evidence. To investigate the role of MALAT1 in Endothelial-to-mesenchymal transition (EndMT) of human circulating endothelial progenitor cells (EPCs) induced by TGF-β1, Xiang Y et al [34] treated cells with TGF-β1 and found that TGF-β1 strongly induced MALAT1 mRNA expression in EPCs. However, the regulated correlation between TGF-β and MALAT1 in ESCC has not been revealed. Based on these research findings, we postulated that TGF-β may regulate the expression of MALAT1, thereby promoting invasion of ESCC induced by EMT. Here, we demonstrated that TGF-β1 induces MALAT1 expression and EMT in ESCC cells. The expression of MALAT1 is significantly correlated with the expression of TGF-β1 [35]. Moreover, MALAT1 inhibition increases E-cadherin expression with concurrent downregulation of Vimentin in ESCC cells. Furthermore, MALAT1 inhibition decreases cell proliferation, migration and invasion and increases cell apoptosis in ESCC. More importantly, MALAT1 inhibition partly abrogates TGF-β1-induced EMT.

Another mechanism by which MALAT1 positively regulates metastasis is through the regulatory effects of various factors [36, 37]. Recent studies showed that MALAT1 promotes malignant development of ESCC by targeting β-catenin via Ezh2 [35], as well as by modifying the ATM-CHK2 pathway [38]. Moreover, posttranscriptional regulation of MALAT1 by miR-101 and miR-217 exists in ESCC cells [39, 40]. Although we did not investigate the downstream target gene of MALAT1 in ESCC, we preliminarily predicted that 113 miRNAs could be regulated by MALAT1 (supplementary table 1), including miR-26a [41, 42] and miR-106b [43, 44], which we have already demonstrated are significantly correlated with invasion and metastasis of ESCC. Thus, MALAT1 may regulate EMT in ESCC through the regulatory effects of downstream miRNAs.

In conclusion, we replicated the overexpression of TGF-β1 in ESCC, which indicates poor prognosis. MALAT1 may promote ESCC invasion and metastasis by targeting TGF-β1-induced EMT, although other mechanisms could not be excluded.

Qing Liu performed the experiments and drafted the manuscript; Shutao Zheng and Tao Liu provided the much convenience in respect of all the reagents and materials involved; Yumei Chen, Xiujuan Han, Xiao Zhang and Tongxue Shen lend their generous help in the experimentation; Xiaomei Lu conceived the study, revised and polished the manuscript, and was responsible for the whole investigation performed.

27. Wei Y, Niu B. Role of MALAT1 as a Prognostic Factor for Survival in Various Cancers: A Systematic Review of the Literature with Meta-Analysis. Disease markers. 2015;2015:164635