Lung cancer is the leading cause of cancer-related mortality and histologically is classified into small-cell lung cancer (SCLC) and non-small cell lung cancer (NSCLC). NSCLC accounts for approximately 80%-85% of all lung cancers [1, 2]. Mounting evidence indicates that proto-oncogenes, such as RAS, EGFR or PIK3CA, are often activated in NSCLC [3-5]. Moreover, the p53 tumor suppressor gene, the most studied gene in the human genome [6], is frequently mutated in NSCLC [7, 8]. Accumulating clinical evidence indicates that mutant p53 is associated with NSCLC poor clinical outcome and cancer metastasis [9, 10].

Neuraminidase-1 (NEU1) is a neuraminidase family protein that catalyzes the removal of sialic acid residues from the glycan chains of glycoproteins, oligosaccharides and sialylated glycolipids and modulates molecular and cellular recognition events [22, 23]. It has been reported that NEU1 plays a critical role in sialidase-mediated tumorigenesis [24]. Recently, it has been documented that NEU1 has a potential role in the regulation of cell proliferation, migration, invasion and cancer metastasis [25-27]. 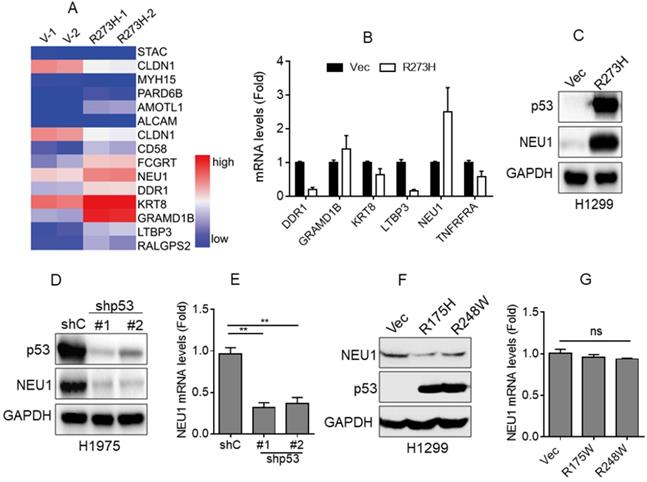 The Oncomine and TCGA databases were used to analyze NEU1 mRNA levels in clinical human lung cancers. The Kaplan-Meier plotter platform (https://kmplot.com/analysis/) was used to analyze the overall survival of lung cancer patients. 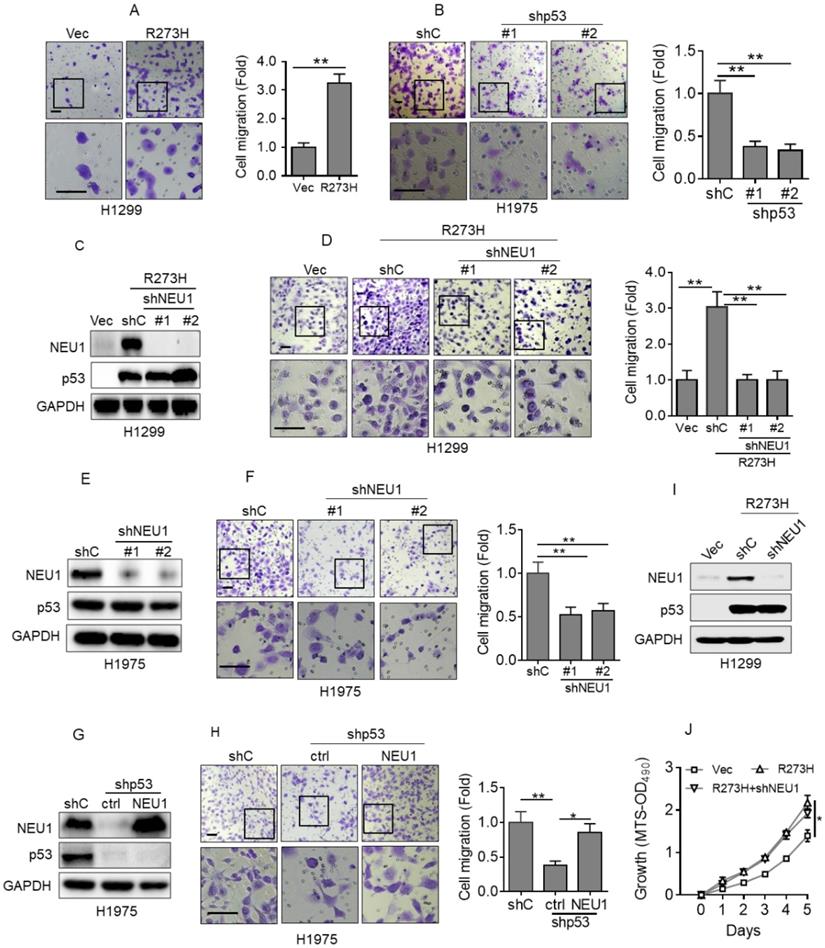 Together, these results indicate that p53-R273H can effectively promote NEU1 expression. 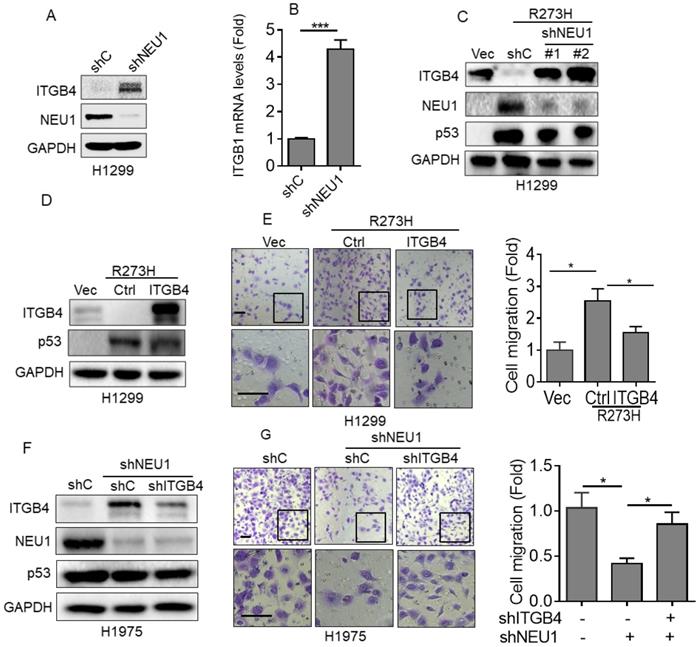 Accumulating clinical evidence indicates that p53 is the most commonly mutated gene in human cancer [34]. It has been reported that mutant p53 is associated with poor clinical outcome in NSCLC patients [35]. Mutant p53 regulates multiple biological functions, including cell proliferation, tumor growth and cancer metastasis [14, 17]. It has been documented that mutant p53 can promote integrin recycling or inhibit ZO-1 expression to enhance cell invasion and cancer metastasis [18, 21]. Our previous study demonstrated that p53-R273H significantly promotes cell migration and cancer metastasis via upregulation of Nrp2 expression [17]. In this study, we showed that NEU1 mRNA expression is associated with NSCLC patient overall survival. NSCLC patients with high NEU1 mRNA expression exhibited low overall survival. Importantly, we found that NEU1 is a novel downstream target of p53-R273H and plays an important role in p53-R273H-induced NSCLC cell migration (Figure 5E). However, we found that the others p53 hotspot mutations, such as R175H or R248W, have little effects on NEU1 expression, suggesting that p53-R273H may specific regulate NEU1 expression.

The question remains how p53-R273H promotes NEU1 expression. It has been demonstrated that activated AKT signaling regulates a series of gene transcription pathways, including c-Myc and p63 [36]. Interestingly, it has been shown that mutant p53 can activate AKT signaling by enhancing EGFR trafficking [18]. We showed that p53-R273H significantly promotes NEU1 transcription. Therefore, we speculate that AKT signaling may play a role in p53-R273H promoting NEU1 expression. Indeed, inhibition of AKT dramatically suppressed p53-R273H-induced NEU1 mRNA and protein expression contaminant with reduced cell migration. Our previous data indicate that AKT activation can directly phosphorylate FOXO3a, which leads to the inhibition of p63 transcription [29]. However, whether FOXO3a is also involved in AKT-mediated regulation of NEU1 transcription needs to be further examined. Moreover, it is reported that p53-R273H can be used as a transcriptional co-factor binds to G/C-rich regulatory regions to active gene expression [37]. There are serval G/C-rich regions on NEU1 gene promoter. Therefore, p53-R273H may regulate NEU1 transcription through both direct and indirect manners. However, whether p53-R273H direct binds to NEU1 gene promoter needs to further investigate.

NEU1 functions as a sialidase to regulate a set of genes involved in a variety of different biological processes, including cell migration and cancer metastasis [38, 39]. Integrin family proteins, as cell surface adherent receptors, are fundamentally important for multiple facets of biological processes, including cell-cell junctions, metastasis and survival [18, 32, 40]. Accumulating evidence indicates that integrin β4, an important integrin family protein, suppresses cancer metastasis via inhibition of EMT and promotion of cell-cell and cell-matrix adhesion [32]. Interestingly, it has been reported that NEU1 plays a critical role in the regulating ITGB4-mediated signaling [33]. Given these observations, ITGB4 may play a role in the p53-R273H/NEU1 axis-induced NSCLC metastasis. Indeed, our results show that ITGB4 plays a pivotal role in NEU1-induced NSCLC cell migration. 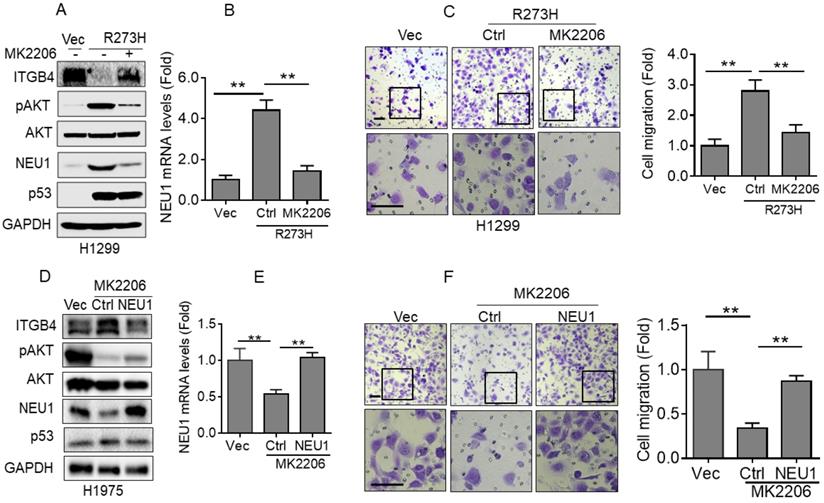 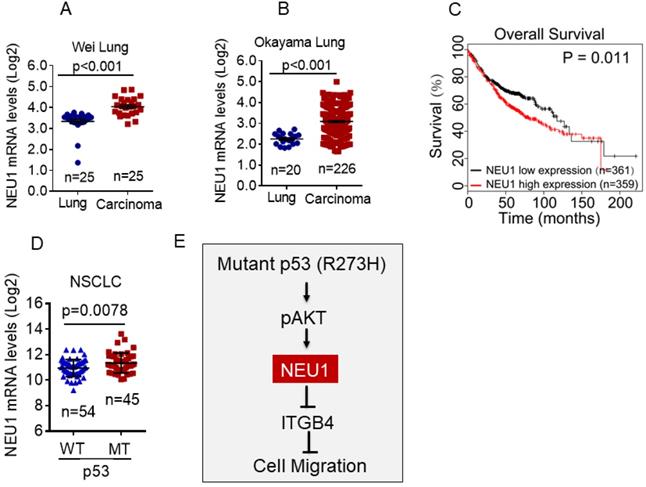 A series of clinical and basic evidence indicates that activation of EGFR plays a critical role in NSCLC initiation and development [41, 42]. Targeting EGFR is a promising strategy for NSCLC treatment. Regimen EGFR tyrosine kinase inhibitor (TKI), such as erlotinib or gefitinib, exhibited a good benefit for NSCLC patients [42]. However, EGFR-TKI resistance is a major challenge for NSCLC treatment [43]. It has been reported that NEU1 and MMP-9 form a complex with EGFR on the cell surface that is essential for the activation of EGFR [44]. Here, we showed that NEU1 plays a role in mutant p53-mediated NSCLC cell migration. It is conceivable that NEU1 could be a potential therapeutic target for NSCLC patients harboring mutant p53 and EGFR.

We thank Professor Zhi-Xiong Xiao (Sichuan University) for helpful discussions of this manuscript. We are grateful for members of Xiao lab for stimulating discussion. We thank Dr Bert Vogelstein for kindly providing p53-R273H expression plasmid. This work was supported by National Natural Science Foundation of China (NSFC) grant (31801175) to TL, (81802951) to YY, and (81601602) to JW and China Postdoctoral Science Foundation (2020T130451 and 2018M631081) to YY.